The trick to fighting is combining Vigors with conventional weaponry, and finding the mix that works best for the situation in hand. As in Bioshock it’s not about just shooting, but about using the environment and the game’s rich toolbox to dispatch your enemies in the most effective or spectacular ways. Enemy AI still doesn’t feel too sophisticated, with predictable movements and sudden rush attacks, but the game makes up for it by throwing plenty on the screen at once, and making each one require a different mix of tactics. 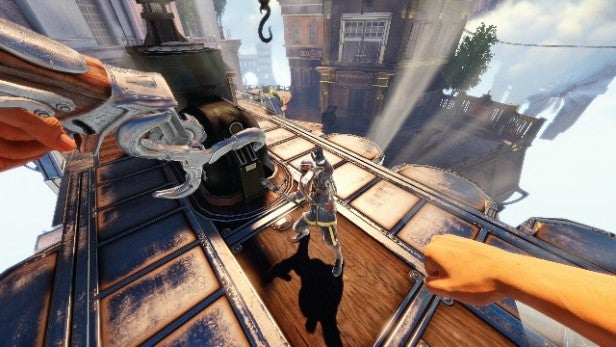 On normal and medium difficulty levels the game is satisfying without being fiercely challenging. While Columbia doesn’t have Rapture’s Vita chambers, Infinite has its own means of getting you back on your feet without taking you out of the game. More hardcore players have a hard mode and an unlockable 1999 mode which strip away any aids and punish failure more severely.

Bioshock Infinite: About A Girl
Were this all there was to Infinite, we might be experiencing a spot of deja vu. Infinite has its own weird location and its own eccentric cast, its own period style, its own vending machines and its own political and theoretical positions to attack, but were it not for one thing it would feel much like a bigger, more expansive version of the first game. In fact, you might argue it’s inferior. Stealth approaches are practically impossible, and while there are some great characters, none quite hit the iconic status of the Big Daddy and Little Sister combo. 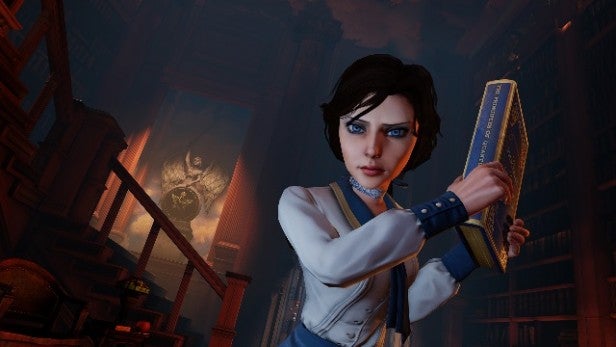 That thing is the girl, Elizabeth. She’s the crux on which the whole plot moves, and on which the whole game operates. She’s not the first AI companion in a game – remember Half Life 2: Episode One’s Alex, Enslaved’s Trip and the 2008 Prince of Persia reboot’s Elika – but she’s the first to work completely on both a gameplay and narrative level. Elizabeth isn’t a girl to be constantly rescued, escorted or even romanced. In fact, you might say she rescues you.

She’s a constant presence through most of the game, slowly filling in the story and building its big emotional beats. In combat she’s a real help, throwing you health, salts and ammunition just when you seem to need them most. She’s artfully designed and beautifully animated, and convincingly scared, repulsed, angry and heartbroken. Infinite doesn’t need any ‘would you kindly’. All the motivation you need is up there on the screen.

Bioshock Infinite: Tears and Triumphs
Elizabeth’s other big plus is her skill at working tears – rips in the space/time continuum that lead to alternate realities. These not only build into the over-arching plot, but work their way into the combat mechanics; target a handy tear and Elizabeth can pull in ammo caches, automated turrets or cover to cower behind. 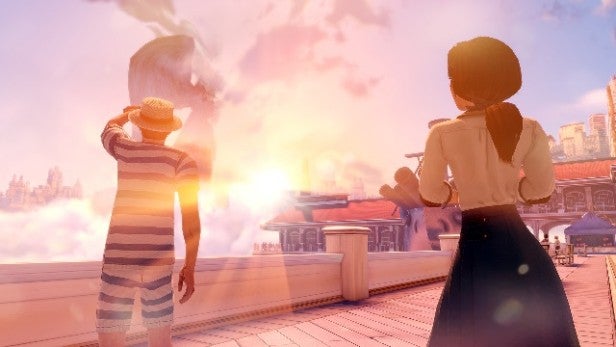 Most of all, though, Elizabeth anchors the story. Infinite has an incredibly ambitious narrative, pulling in elements of science-fiction, metaphysics, class struggle, religion and American myth, but while it’s complex, fascinating and unpredictable, it could also have been rather cold. Elizabeth grounds it emotionally, making you not just want to see what happens next, but to make sure that it all comes out alright. You might not see where it’s heading at first, but by the time the game reaches its storming final hours, you’ll be hooked. Gaming just doesn’t get more enthralling than this.

Strip the game back to its raw features and Bioshock Infinite might not seem like a big step on from the original, but the new setting is magnificent, the story is complex and powerful, and Elizabeth is the most brilliantly devised computer controlled co-star yet. Most importantly, Infinite is an incredible experience, and one that every gamer ought to go through, connect with and enjoy. Like its predecessor, this is one of the era’s most essential games.