This new mid-range Sony projector has rather snuck up on us. We got a bit of press info about it on the eve of the Berlin IFA show, and then caught a glimpse of it in action at the end of a presentation ostensibly about Sony’s 4K TV and projector. But no sooner had we started to digest either of these ‘moments’ than the Sony VPL-HW50ES was suddenly sat atop our projector stand, ready, willing and able – hopefully – to continue Sony’s mostly superb run of 2012 AV form.

Aesthetically the Sony VPL-HW50ES is unusually pretty by projector standards. Its boldly arced and glossy top, rounded corners, together with its centrally mounted and recessed lens all add up to a thing of relative beauty – especially if you get the white version rather than the slightly more dour-looking black one. (Though obviously the black one will be the subtlest bet if you’ve got a fully blacked out room.) 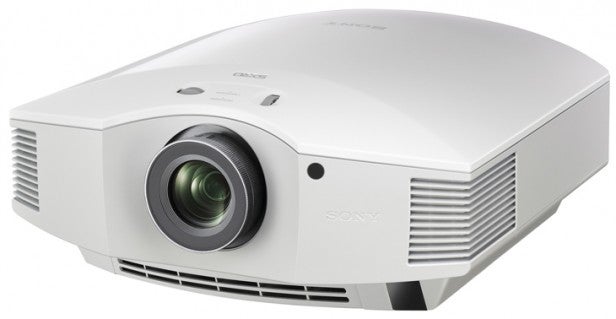 Tucked under a ledge down the side of the Sony VPL-HW50ES projector is a solid/typical selection of connections. Two HDMIs will be the most important jacks for most people, but there’s also a D-Sub PC port, a component video jack, a port for adding an optional extra external 3D transmitter (though there is also a 3D transmitter built into the projector), an IR port, and a 9-pin control socket.

It’s perhaps a shame that the Sony VPL-HW50ES doesn’t follow the Panasonic AT6000E’s lead in offering a third HDMI, but to be fair hardly any other projectors offer more than two either.

Setting the Sony VPL-HW50ES up is pretty straightforward. Its lens offers a respectable x1.6 optical zoom, and images can be optically shifted vertically or horizontally using simple rotating adjustors on the projector’s top edge. Focus and zoom, meanwhile, are achieved via simple wheels around the lens.

Having recently tested the Panasonic AT6000E, we can’t ignore the fact that Panasonic’s model trumps the Sony VPL-HW50ES in offering a greater amount of optical zoom (x2) as well as motorised zoom and focus controls and a lens memory feature for folk with an ultra-wide 21:9-ratio screen.

However, while Panasonic’s excellence where set-up is concerned gives Sony some things to think about for the HW50’s successor, it doesn’t alter the fact that the Sony VPL-HW50ES really shouldn’t present many people with any major setup headaches. 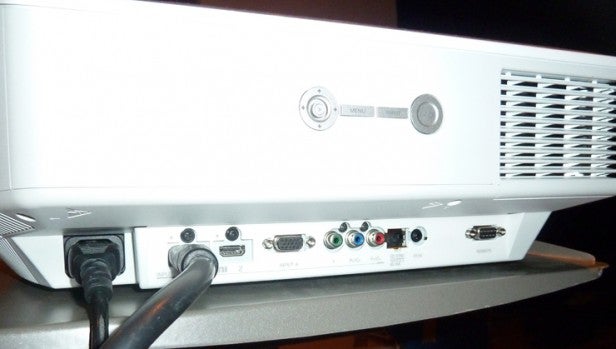 The mid-range positioning of the Sony VPL-HW50ES finds it slotting into Sony’s 3D projection range above the soon-to-be-discontinued HW30 but below the excellent Sony VPL-VW95ES. Sony also has the VW1000ES projector, of course, but this model’s 4K native resolution and £17,000 price point put it in a whole separate product category.

The Sony VPL-HW50ES specification represents quite a significant step up from the HW30. For starters, the HW50’s claimed 1700 ANSI Lumens of brightness is a 30 per cent increase on the past model. This should benefit 2D images, of course, but its biggest impact is likely to be with 3D, as the extra brightness should help fight the dimming impact of active shutter 3D glasses.

As well as its improved brightness and contrast, the Sony VPL-HW50ES also offers a potentially significant step up from the HW30 by carrying Sony’s Reality Creation processing. This impressively powerful engine can deliver a number of key benefits, including making HD pictures look sharper; delivering more effective standard definition upscaling; and perhaps most intriguingly of all, enabling the projector to bring out more shadow detail in dark scenes.

The Sony VPL-HW50ES offers a solid selection of picture adjustments to keep tweakers happy. It doesn’t go to town as much as the Panasonic AT6000E, but this isn’t necessarily a bad thing, as it makes the HW50 much less intimidating to use.

The only area of potentially serious set-up complication is the Sony VPL-HW50ES’s colour management system. For this uses Sony’s Real Colour Processing platform, complete with an initially bewildering interface that uses a combination of graphics and more standard numeric adjustments. However, persevere and you will master the system eventually. And actually, once you reach this stage, it turns out to be quite effective.

During the preview of the Sony VPL-HW50ES referenced at the start of this review, Sony’s new mid-range projector looked very impressive. And happily this early promise is amply fulfilled by the finished HW50 article. So immediately watchable and accomplished were the HW50’s pictures, in fact, that we forgot for a while that we were supposed to be analysing them, and instead just got lost in what we were watching. This is a very good sign.

Eventually forcing ourselves to dissect what makes the Sony VPL-HW50ES’s pictures tick, their most instantly striking feature is the amount of detail HD pictures contain with Reality Creation active. Toggle the feature on and off and you’ll be amazed by the amount of extra texture, detail and sharpness the picture suddenly enjoys with such classic HD ‘show-off’ fare as brickwork, treescapes, clothing weaves etc. It’s like HD-plus, frankly.

Of course, a certain breed of video purist will likely be feeling nauseous already at this talk of extra sharpness processing. But to these people all we can say is that the extra sense of detail is not generally (more on this qualification later) accompanied by extra noise or other unwanted processing side effects.

The impact of Reality Creation is even more pronounced during dark scenes. For as well as boosting detail levels generally, the system also has a remarkable impact on shadow detail, bringing subtleties out of dark picture areas that haven’t been visible before on any similarly affordable projectors. 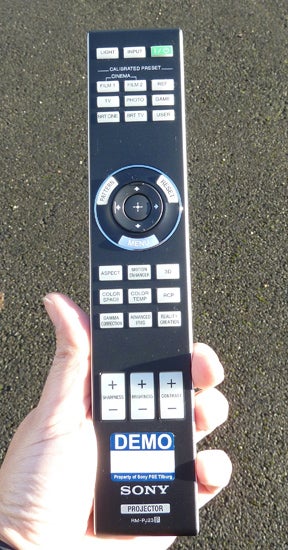 It’s important to stress here that the Reality Creation processing is sufficiently clever to bring out shadow detail without simply ramping up the image’s overall brightness, ensuring that black parts of the picture don’t suddenly become grey and wishy-washy. In fact, an impressively deep black level performance is another of the Sony VPL-HW50ES’ most impressive achievements, enabling it to present dark scenes with a veracity and authority that isn’t far short of the brand’s VW95ES, and certainly represents a new high for Sony at the HW50’s price level.

Sony did actually need to deliver a black level improvement of this magnitude given JVC’s recent achievements in this critical area and the way Panasonic’s AT6000E has revolutionised the black level possibilities of LCD projection technology. In fact, the latest JVC and Panasonic models arguably do even slightly deeper blacks than the HW50. But Sony’s model balances this out with the exceptional amount of shadow detail it produces via Reality Creation.

The Sony VPL-HW50ES is an excellent colour performer too. Tones look bolder yet also more natural than they do on the HW30, and there’s markedly more finesse in the way the HW50 reproduces colour blends. Plus, as we would expect, the HW50’s ability to make colours look convincing during dark scenes is greatly enhanced by its deeper black levels.

Then there’s that brightness rise to consider. Pretty much every bit of the HW50‘s 30 per cent extra brightness over the HW30 is clearly visible on screen, and is given extra punch by the way the projector’s enhanced contrast enables the brighter colours and whites to sit right alongside the deeper blacks we’ve already described.

As predicted, the brightness boost works wonders with 3D too. Inevitably donning one of the two pairs of active shutter 3D glasses shipped free with the Sony VPL-HW50ES (you don’t get any with the Panasonic AT6000E) results in some reduction in brightness versus 2D. But the brightness loss is less extreme than it usually is with affordable 3D projectors, especially if you use one of the HW50‘s two highest ‘glasses brightness’ settings.

The extra 3D brightness pays dividends too in enabling the Sony VPL-HW50ES to reproduce bolder, more believable colours than you commonly get with affordable 3D projectors, as well as an enhanced sense of 3D space as you can pick out more depth ‘markers’ during dark 3D sequences. Panasonic’s AT6000E claims considerably more brightness than the HW50, but intriguingly the AT6000E’s 3D pictures suffer a much greater drop off in brightness versus 2D than happens with the HW50.

The Sony VPL-HW50ES also outguns the AT6000E’s 3D pictures where crosstalk is concerned. The HW50 isn’t wholly immune to this ghosting problem, but it only pops up on rare occasions, and even when it does it’s not severe. It certainly doesn’t cause the out-of-focus backdrops you sometimes see with the AT6000E.

Inevitably the Sony VPL-HW50ES isn’t perfect. One issue with the mostly superlative Reality Creation system is that occasionally, if a film is especially grainy, the processing struggles to cope and can leave pictures looking rather processed and ‘smeary’. You can combat this, though, by either turning RC off completely, or else adjusting the sharpness and noise reduction components of the RC system. 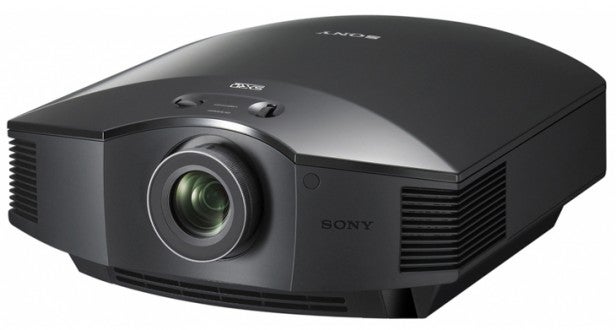 Another issue is that the projector pumps out a rather distracting high-pitched noise if you set the glass brightness to either level two or level four – so it’s just as well that level three is probably our preferred option anyway on account of the way the brightest level four mode causes a noticeable increase in crosstalk.

One final area Sony could work on is 3D motion. It looks a little juddery without using Sony’s MotionFlow processing, but this processing can tend to make action scenes look a little unnatural.

Don’t be put off by the little list of niggles we finished the main review with. For in reality all these issues do is explain why the Sony VPL-HW50ES is only £3,000 rather than £5,000 or more. Overall the HW50 is an absolutely outstanding effort that rocks with 2D and sets new standards for its price level with 3D. In other words, it’s another red letter day in Sony’s bid to get back on top of the AV game.