You may be aware that LCD displays use different panel types, which affect characteristics and quality. The most ‘expensive’, found in high-end LCD televisions, professional or premium monitors, and mobile devices like the iPhone, iPad and Nexus 7, is IPS, or Samsung’s PLS equivalent as found in the Series 9 laptop. One small rung down is PVA/MVA, which generally trades slightly weaker viewing angles and colour accuracy for better contrast and response time. It’s found on the Lenovo A720, among others.

At the bottom of the heap is TN, which rarely offers good viewing angles. It’s found on sub-£100 tablets, most laptops, and budget TVs and monitors. However, BenQ takes the money excuse out of the equation with its GW2250HM, a 22-inch VA-panel Full HD display for a penny under £100. 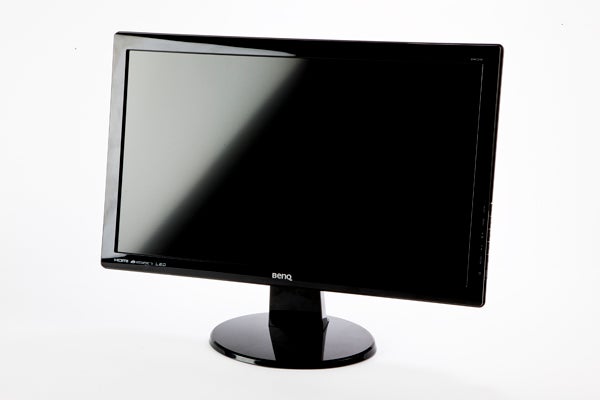 Our previous budget champion was the ViewSonic VX2336s-LED, a 23-inch IPS display for under £130. However, while that monitor offered superb quality for the money, its connectivity was quite limited and its design very basic. The BenQ GW2250HM, on the other hand, throws in everything from VGA and DVI to HDMI and audio, along with some speakers, while trying to gloss up its design a little. Can it become the new affordable number one? 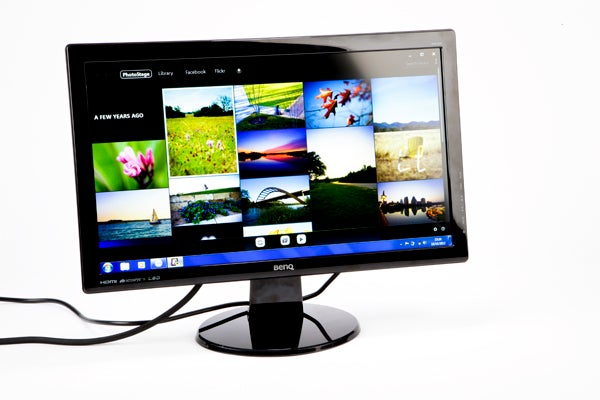 Design and Build
The entire front, stand and base of the BenQ GW2250 are glossy black plastic, while its back sports a matt textured finish. The glossy look may make a nice first impression, but we are definitely not fans. Every fingerprint and dust-mote will show up, and the glossy bezel causes distracting reflections. Having said that, it’s definitely a more attractive design than the ViewSonic VX2336s-LED. 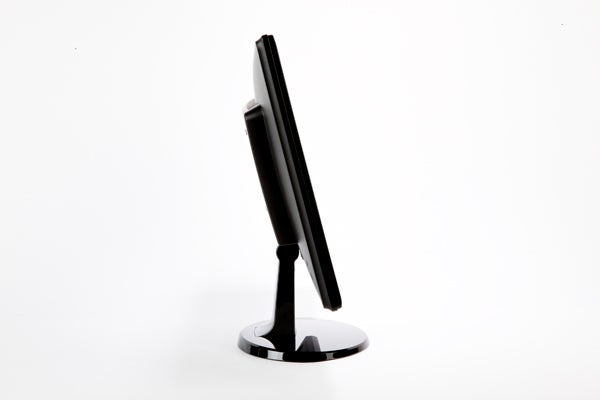 Build quality is pretty good throughout. The plastics used seem solid, and despite feeling a little hollow, there’s practically no unwanted creak or flex in the GW2250HM’s chassis.

Assembly and Adjustability
The BenQ GW2250HM arrives in three separate parts but is child’s play to assemble. Simply click the stand into the base, then slide the monitor onto the stand’s metal clasp and voila. 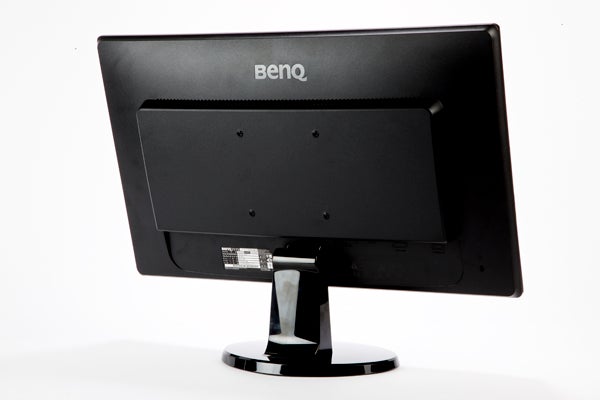 As with nearly every ‘budget’ monitor around, the GW2250’s adjustability is limited to a smooth tilt. If you want swivel, pivot and, most importantly, height adjustment, you’ll need to VESA mount it on an adjustable stand like the one Hazro does.

It’s nice to see that, despite this BenQ’s slim dimensions, it power adapter is integrated into the monitor. This not only reduces clutter and hassle, but also means it takes a standard power cable. 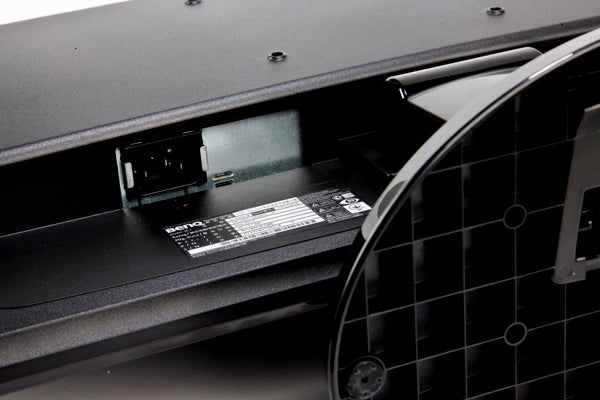 Connectivity
We were pleasantly surprised by the amount of connections BenQ has managed to include in a monitor this affordable. The GW2250HM not only gives you the VGA and DVI options you would expect on a display near the £100 mark, but also adds in HDMI for consoles, and even sweetens the deal with audio in and out. 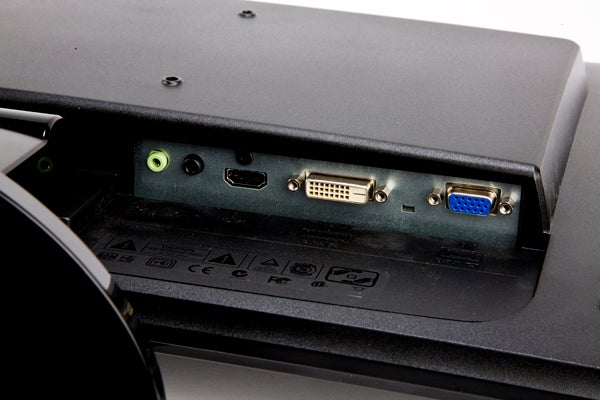 This means that you can output the audio stream from your computer, an MP3 player or an HDMI source through headphones or speakers (we would recommend external ones rather than the monitor’s), and should be an obligatory feature on any consumer-oriented display. Where BenQ has cut a small corner is by not including a digital video cable, but those are cheap and plentiful.

Controls and OSD
The controls for the BenQ GW2250HM are accessible and easy to use. They’re a set of six physical buttons along the monitor’s right side, the middle four of which control the OSD. 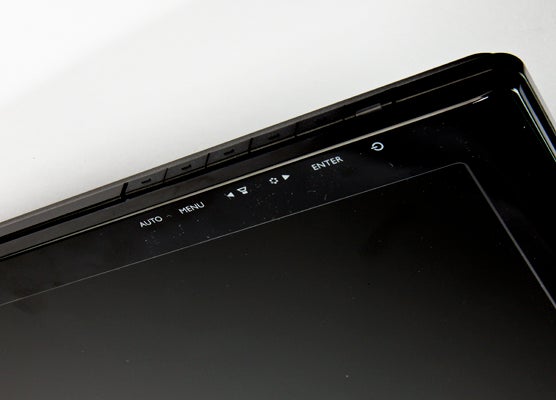 We nearly always prefer the tactile feedback of these compared to touch ones, and thanks to clear labels on the monitor’s bezel, it’s fairly easy to know which one you’re pressing. Shortcuts are intelligently assigned too.

If we have any complaints, it’s that all the buttons are the same shape and size, even the ‘Auto’ button up top and power one at the bottom. The power button does have a green LED which makes using these controls in the dark easier. 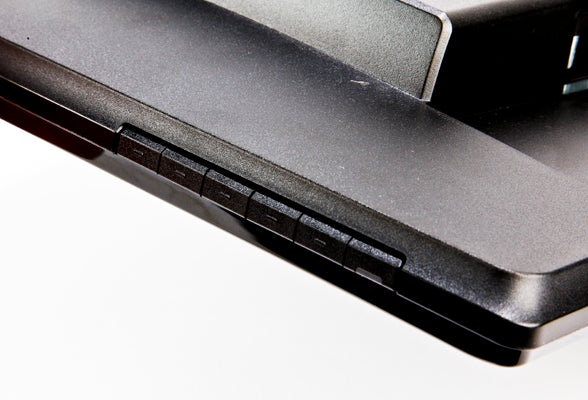 The GW2250’s OSD is typical BenQ fare. It’s colourful and fairly straightforward, with all the options you might want. It’s just a pity some of them don’t have straightforward names, colour temperatures are measured in “Bluish” and “Reddish” rather than degrees Kelvin, and every preset except sRGB or Standard is horribly configured.

Image Quality
As mentioned, the BenQ GW2250HM uses a 22-inch, 1,920 x 1,080, matt VA panel. And apart from one little niggle, it holds up brilliantly. To get that niggle out of the way first, there’s an almost dithering-like variant of the slightly grainy effect that you most often see on matt IPS panels like the Dell UltraSharp U2410. But it’s only really visible against a pale background, and it’s subtle enough that you don’t notice it after a while. 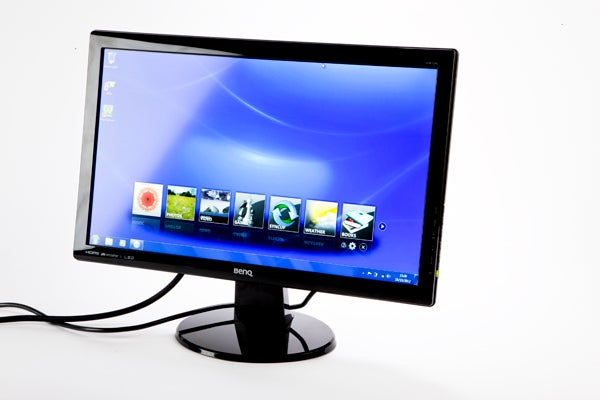 In almost every other regard the image quality of the GW2250HM is superb, especially for the price. On the sRGB preset colours are relatively realistic, and on Standard you can manipulate everything from Gamma to Color Temperature (do not, we repeat not, use the other presets).

Contrast is excellent too, with even the subtlest dark detailing being visible. Viewing angles, meanwhile, are virtually indistinguishable form a decent IPS panel, with virtually no sign of contrast or colour shift. 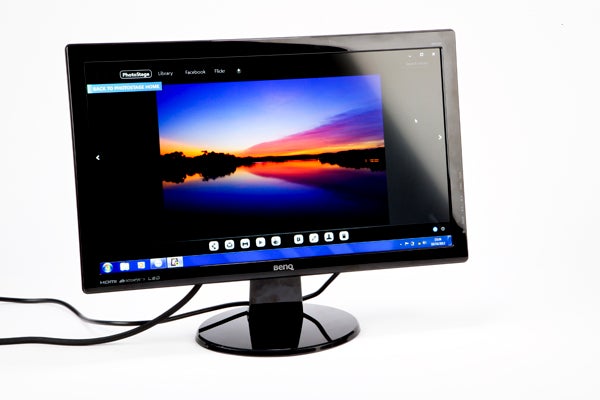 There’s also no sign of backlight bleed and backlighting overall is fairly even, though on our sample there was a slight concentration on the right side. Still, watching a movie with black bars or playing a gloomy game in a darkened room, there is little sign of the distracting light variances that often crop up on monitors.

Last but not least, one of the main advantages that VA-type panels can have over IPS is their faster response time. BenQ claims a GTG of 4ms for the GW2250, and we didn’t notice any significant ghosting while playing an FPS title. This means that gamers after an affordable high-quality display will be better served with this 22-inch monitor than the 23-inch IPS ViewSonic VX2336s-LED. 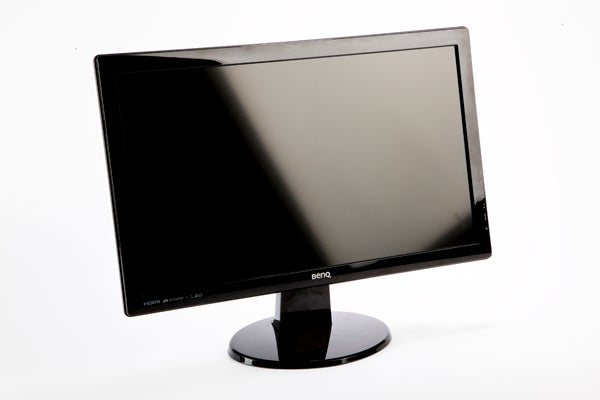 Speakers
Integrated invisibly into the monitor’s rear with its audio projecting out the top, the BenQ GW2250HM’s speaker is, in a word, pathetic. Mind you, it actually manages a nice level of clarity and detail without distortion, but its maximum volume is so weak you’re unlikely to use it for more than YouTube videos. 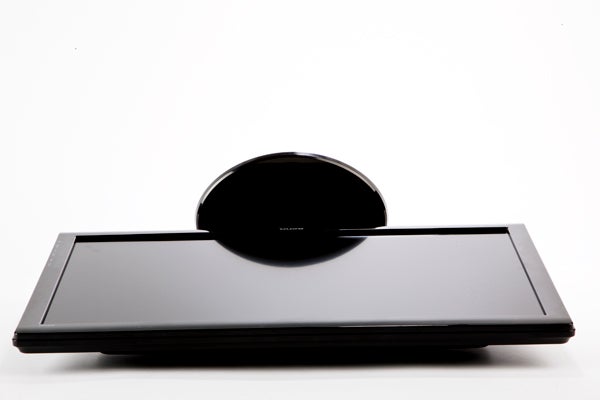 Value
At £99.99, the 22-inch GW2250HM is undoubtedly one of the best-value monitors on the market. There really is no reason to buy a display with an inferior TN panel anymore when you can get this VA-based model for a price that most TN monitors can’t even match.

If you want a slightly larger display without the minor grainy effect and don’t play games that require lightning reflexes, the 23-inch ViewSonic VX2336s-LED can currently be found for £120 – but it’s not as pretty and doesn’t offer as many inputs or carry audio either. As such, we’re crowning the BenQ GW2250 our new budget champion.

BenQ has taken quality to new heights while taking price to new lows with this incredibly affordable VA monitor. The GW2250HM is the final nail in the coffin of cheap and nasty TN displays with their frequently terrible viewing angles and colour quality. It offers generally excellent image quality, decent build and generous connectivity in a slim package. Basically, if you’re after a nice Full HD monitor on a tight budget, you won’t find better than the BenQ GW2250HM.