This is Belkin’s flagship 802.11ac wireless router. It joins an increasingly packed wireless ac marketplace where the likes of Linksys and D-Link have already released their second generation products. Belkin has equipped the AC1800 DB with a healthy feature set and will hope recruiting Norton to beef up its parental controls will give it an edge as competition heats up.

See its key rivals in our best routers round-up. 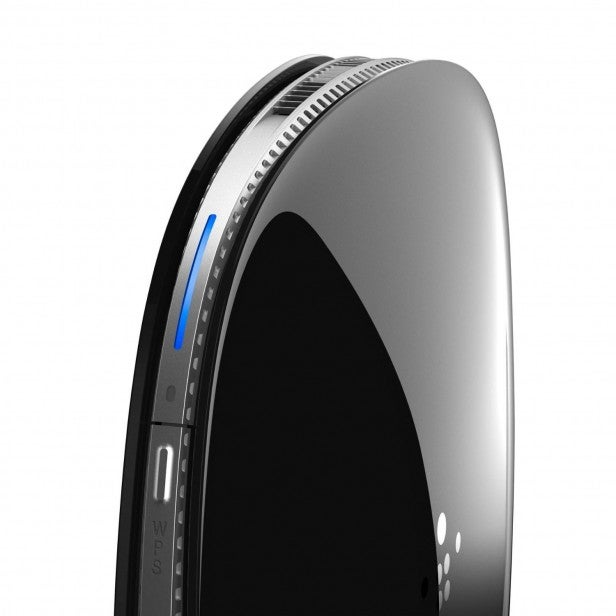 The Belkin AC1800 also sets itself apart when it comes to looks. The vertically standing router gives the impression it was stolen off a 1950s science fiction show with its sweeping curves and air outlets that trace the circumference of its central silver band. The outlets keep the router cool at all times and like most premium routers it operates silently. The sleek look does necessarily widen out at the back to fit its array of ports, but it doesn’t spoil the overall appearance.

That said there are some downsides. While solidly put together the Belkin AC1800 has a piano black gloss finish that preserves every ring of a finger print and there is a distinct lack of useful activity lights other than power and WPS. The upside is the AC1800 won’t distract you with a multitude of blinks, but indicators for the internet status and Ethernet, wireless and USB activity would have been more practical. The Belkin AC1800 also can’t be wall mounted as its stand is fixed, but this isn’t a great loss with an upright router.

Belkin may be a smaller name in networking, but it ticks most of the right boxes with the AC1800. It is 802.11a/b/g/n/ac compatible with four Gigabit Ethernet ports and dual USB 2.0 ports. USB 3.0 doesn’t make an appearance, but this isn’t a major issue given routers’ chipset performance so far remains a greater bottleneck on USB speeds than USB 2.0. In addition, the Belkin AC1800 comes with the staples of WPA/WPA2 and WPS security and support for IPv6 plus DLNA streaming.

Belkin is also making a big noise about its integrated ‘IntelliStream’ QoS (Quality of Service), which automatically prioritises network traffic from video and gaming (much like ‘FasTrack’ on the Western Digital My Net AC1300) and its collaboration with Norton to integrate parental controls.

In reality many free software alternatives will do this, but it does have the benefit of referencing Norton’s continually updated website databases.

Overall this amounts to a pretty solid feature set, but there are two flies in the ointment. The first is the absence of any Cloud platform like D-Link, Linksys (which Belkin recently bought from Cisco) and Asus, which allow remote management of the router. The second is a rather weedy treatment of 802.11n with a reduction that sees Belkin quote 300Mbit rather than the usual 450Mbit theoretical maximum for a top of the range router. Of course the theoretical numbers are always nonsense, but it does throw up a red flag. 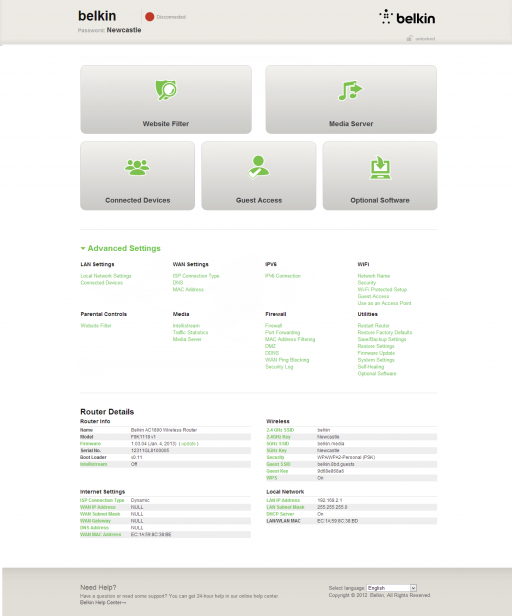 The Belkin AC1800 setup is also a little antiquated. Belkin supplies a CD with the AC1800 when many routers (in the age of tablets and Ultrabooks) are moving to a CD-less setup (configuration on first connection), but the process remains smooth guiding you through wireless connection and setting your default wireless and admin passwords.

Advanced users will be able to skip this, connecting wirelessly using WPS and finding the router’s admin settings at 192.168.2.1. These settings are clearly laid out with a simple graphical UI and it will try to assist with basic connectivity problems should they be detected. As you might expect diving into advanced settings is less user friendly and heavily text based, but numerous options are available including management of Intellistream, Norton’s website filter (which should arguably be in the main menu) and Firewall, LAN and WAN settings.