The Beldray Steam Surge Pro is a bargain steam generator iron that turns your living room into a sauna.

The Beldray Steam Surge Pro “takes ironing to the next level”, offering brilliant crease removal with minimal effort. It has a smooth-glide ceramic soleplate with an anti-drip feature, and a water tank that, at 1.2 litres, is four times the capacity of a standard steam iron.

The 2400W of power gives you a smoother glide and super-fast heat-up, and there’s a conveniently long power cord and a detachable water tank. The vertical steam feature means that you can use it like a steamer to remove creases from hanging garments. However, the steamy finish and a few design issues take the shine off this model.

The Beldray Steam Surge Pro’s water tank has to be pulled out to be filled. Once pushed back into place, you switch on the iron, turning the variable control dial on its body to the desired temperature: Silk/Synthetic (88ºC), Wool (116ºC) or Cotton/Linen (130ºC). There’s no steam if you choose the Silk/Synthetic option. 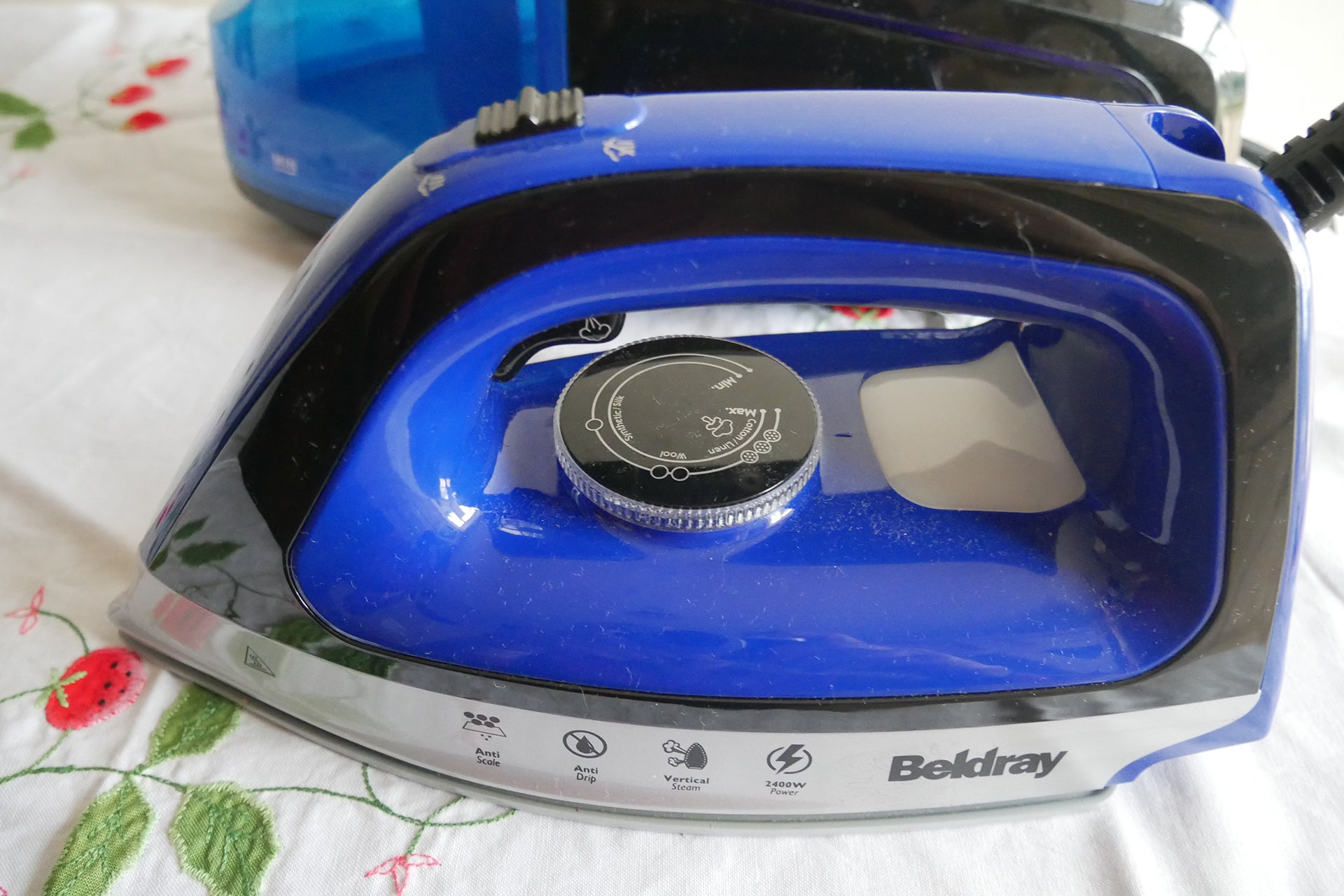 A big blue light comes on towards the back of the body of the iron as it begins to heat up, and switches off as the iron reaches the right temperature. If you want to iron with steam then you must wait until the light goes off, before pressing and holding the steam control trigger beneath the handle. (If you don’t wait, water may leak from the soleplate.)

For continuous steam, press the trigger and simultaneously push the steam lock on the top of the iron’s handle. Even if ironing without steam, it has to be done with water in the tank, to protect the iron.

For vertical steam ironing, turn the temperature dial to wool or cotton/linen, lift the iron and hold it 20cm away from whatever you want to steam. Then you press the steam trigger for a short blast of steam, or press and push the steam lock for continuous steaming.

The Beldray Steam Surge Pro can be used with tap water, even in a hard-water area, because it has an anti-calc filter. Every two to four weeks, this will require cleaning.

To do this, you’ll need to remove the water tank and, using a Phillips screwdriver, unscrew the anti-calc filter at the back of it, pull the filter away from the rubber tube inside the water tank, and lift it out. The filter has to be soaked in a proprietary limescale removing solution, rinsed and replaced.

Beldray suggests that you clean the soleplate and steam holes regularly with methylated spirits. 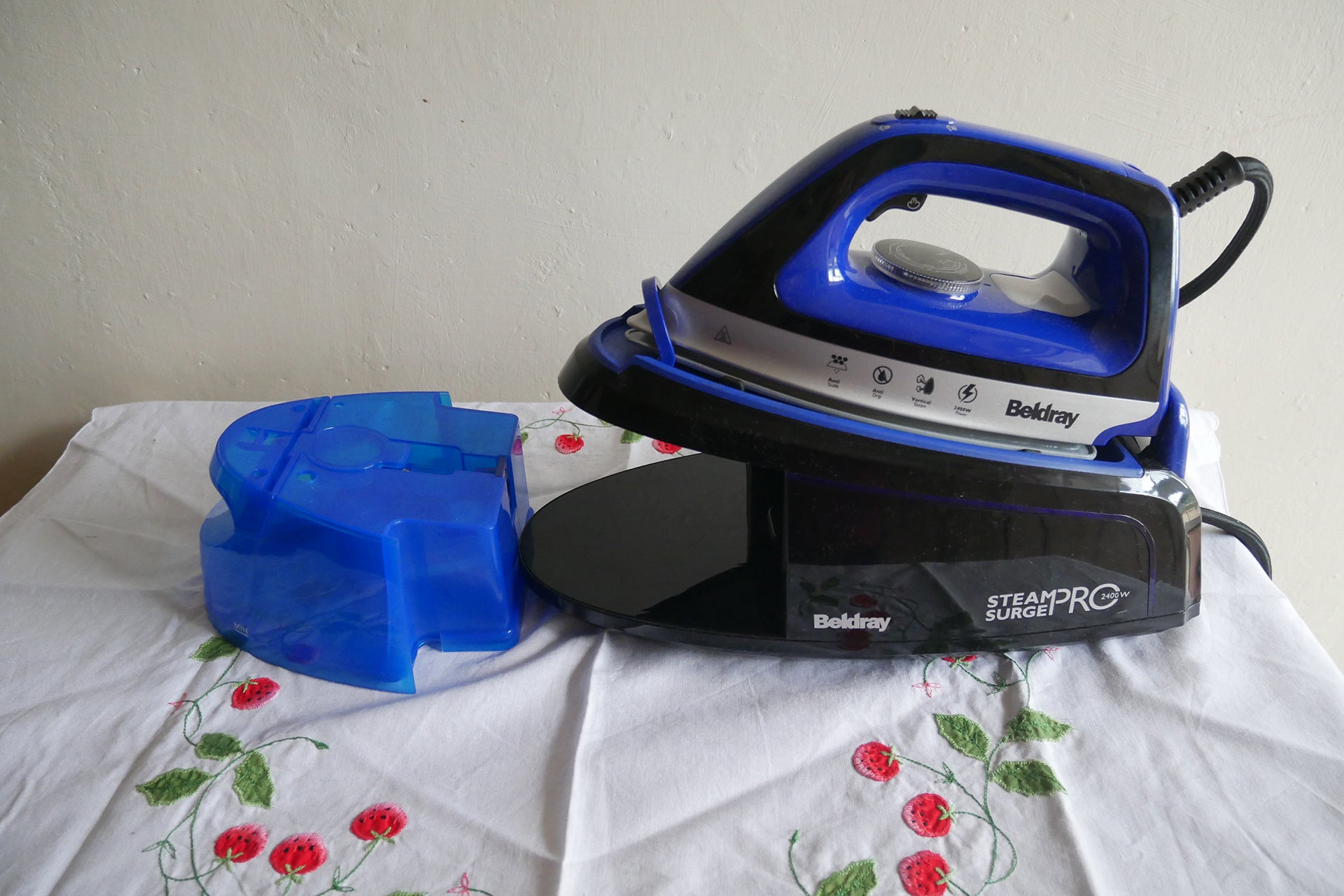 On its top setting, the iron is very steamy indeed. It took 23 seconds to heat from cold to full steam on the Cotton setting, making a buzzing noise as it heated up; it then proceeded to emit wafts of steam.

My reading specs steamed up quickly and, within 11 minutes of starting the ironing, the windows of my sitting room began to mist over too. Basically, it turned the place into a low-key sauna. By the end there were beads of moisture glistening on the walls, the cats looked worried, and the entire room felt damp. I had to open the windows to clear the air.

Beldray says the Steam Surge Pro offers four times the capacity of a standard steam iron at 1.2 litres, but you mustn’t let the water fall below the “min” mark. The water tank began to buzz angrily as I got within a centimetre of that mark. When I switched off and measured how much water brought the tank up to “min”, it was 0.2 litres, so the true amount of water you can use while ironing is one litre.

With that litre I achieved 29 minutes of ironing time, with the Beldray Steam Surge Pro on top heat and belching out steam. This is no more ironing time than you’d get from the 300ml tank of a standard steam iron.

The iron gets steamier the longer you use it, reaching a pinnacle of cloudy wetness about 20 minutes in, before the effect fades as the tank gets closer to empty. There’s no water-spray – but, luckily, with all that dampness in the air you don’t need one.

The steam gives a superb crease-free effect on cottons and cotton mixes, and the 11 steam-hole ceramic soleplate glides nicely. However, since there’s no powerful steam shot to blast steam right into fabric and relax the fibres, when I ironed a sheet folded in four, only the top layer was beautifully smooth; the bottom was still creased. 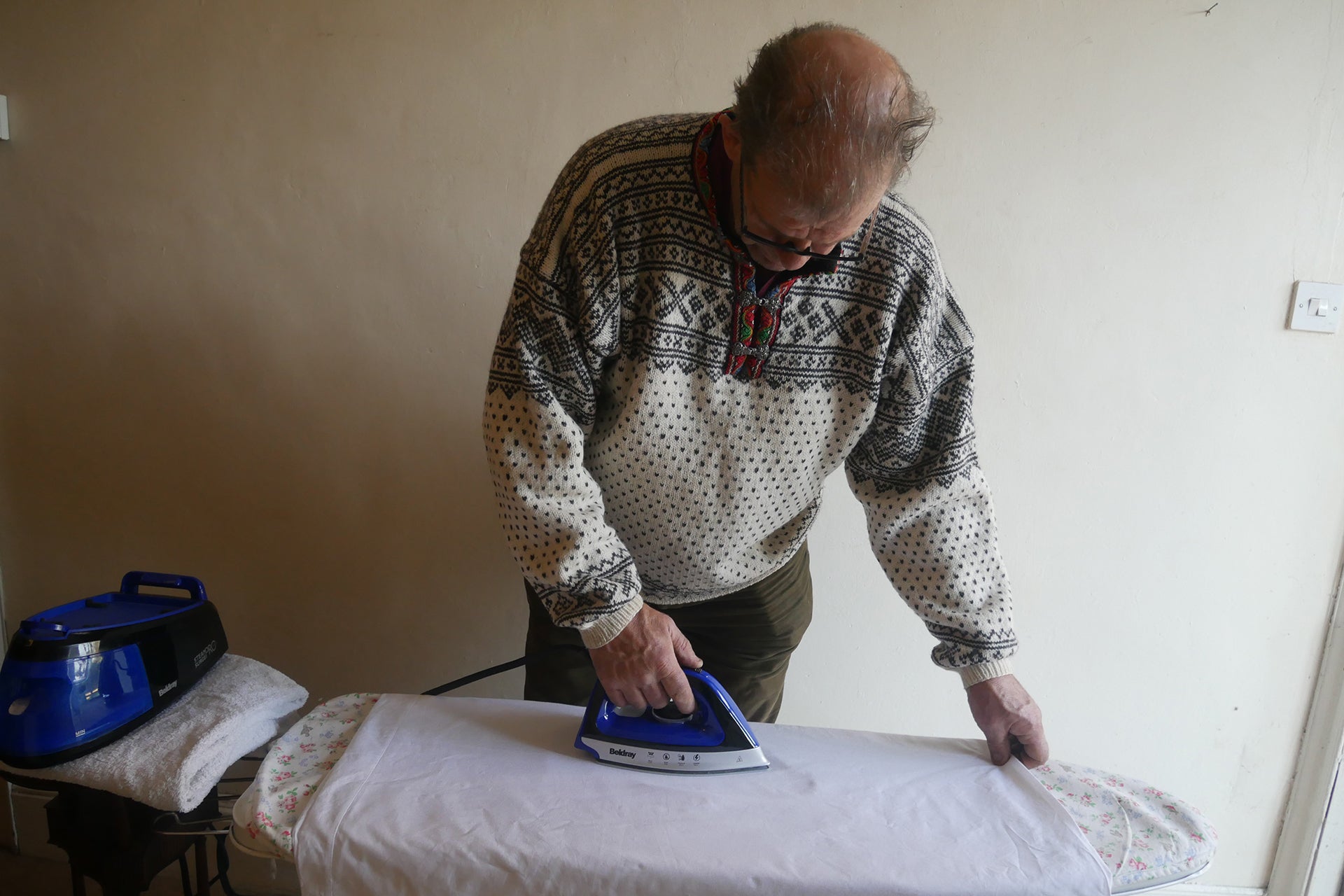 In addition, the deep creases in bone-dry linen stayed put. One of the most enjoyable parts of using a steam generator iron is the “whumph” as steam blasts out on pulling a steam-shot trigger – so it’s sad not to have one. On the Beldray 2400 Steam Surge Pro, the “steam control trigger” is simply there to provide a choice over a single puff of steam or continuous.

This control also activates the vertical steam, which wasn’t strong enough to get creases out of a suit. “Contactless ironing” – or aiming steam at a delicate, artificial-fibre top – didn’t produce impressive results, either. 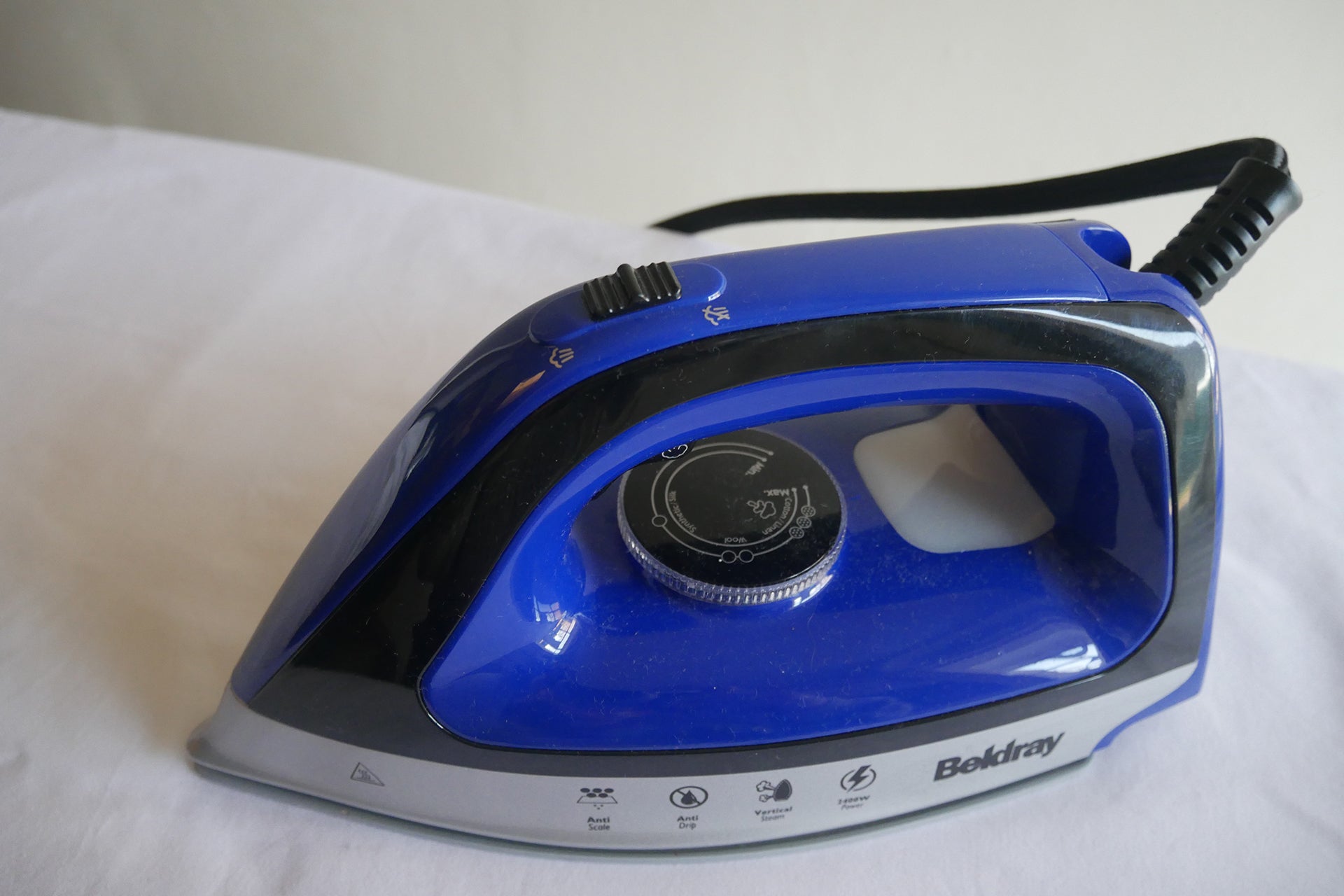 Note that the first time I used the Beldray Steam Surge Pro, I tipped it slightly to shift it to a more comfortable working angle – the water tank cannoned out on to the floor and splashed water over the carpet. Thereafter, I was more careful to snap it firmly in place. But even if I was sure it was locked, it still had a tendency to slide out when full and tilted.

In addition, the steam condenses or drips on to the steam unit. At the end of nearly half an hour of ironing, there was about three tablespoons’ worth of water on the top of the unit.

If you want a cheap, super-steamy steam generator iron, the Beldray Steam Surge Pro is the one to buy. However, it isn’t as satisfying as the real deal, because it doesn’t have a powerful steam shot that relaxes fibres to get out deep creases.

There are some design issues, such as a water tank that keeps slipping out, and there’s no automatic shut-off. The iron also needs laborious cleaning and maintenance. The Braun CareStyle 3 IS 3042 WH Steam Generator Iron is a far better product, and you can find a better regular iron in our Best iron guide.