If you've got a pile of ironing to get through, the Braun CareStyle 3 IS 3042 WH Steam Generator Iron will make short work of difficult creases.

What is the Braun CareStyle 3 IS 3042 WH Steam Generator Iron?

The Braun Carestyle 3 IS 3042 WH Steam Generator Iron is a powerful model, engineered to the highest standards. Its steam rate is double that of a conventional steam iron and this, together with its lightweight head unit means you can eliminate wrinkles fast. The FreeGlide 3D ceramic soleplate, inspired by snowboard design, works as well backwards as it does forwards, gliding over buttons and pockets.

The Braun CareStyle 3 has a digital anti-leak system and a CalcClean facility that alerts you to calcium build-up and enables you to clean it. There’s an extra-large two-litre tank, easily fillable from a tap, and a LED light to alert you when it’s emptying. The iron has two temperatures, one of them Eco, and both use steam for good wrinkle removal. There’s vertical steam, too, for getting creases out of hanging clothes – all combining to make this a great all-rounder.

The two-litre water tank on the Braun CareStyle 3 fills easily and slides back into place with a satisfying click. There’s a LED light with a water-drop symbol under it that comes on at the back of the base unit to warn you when it needs refilling. 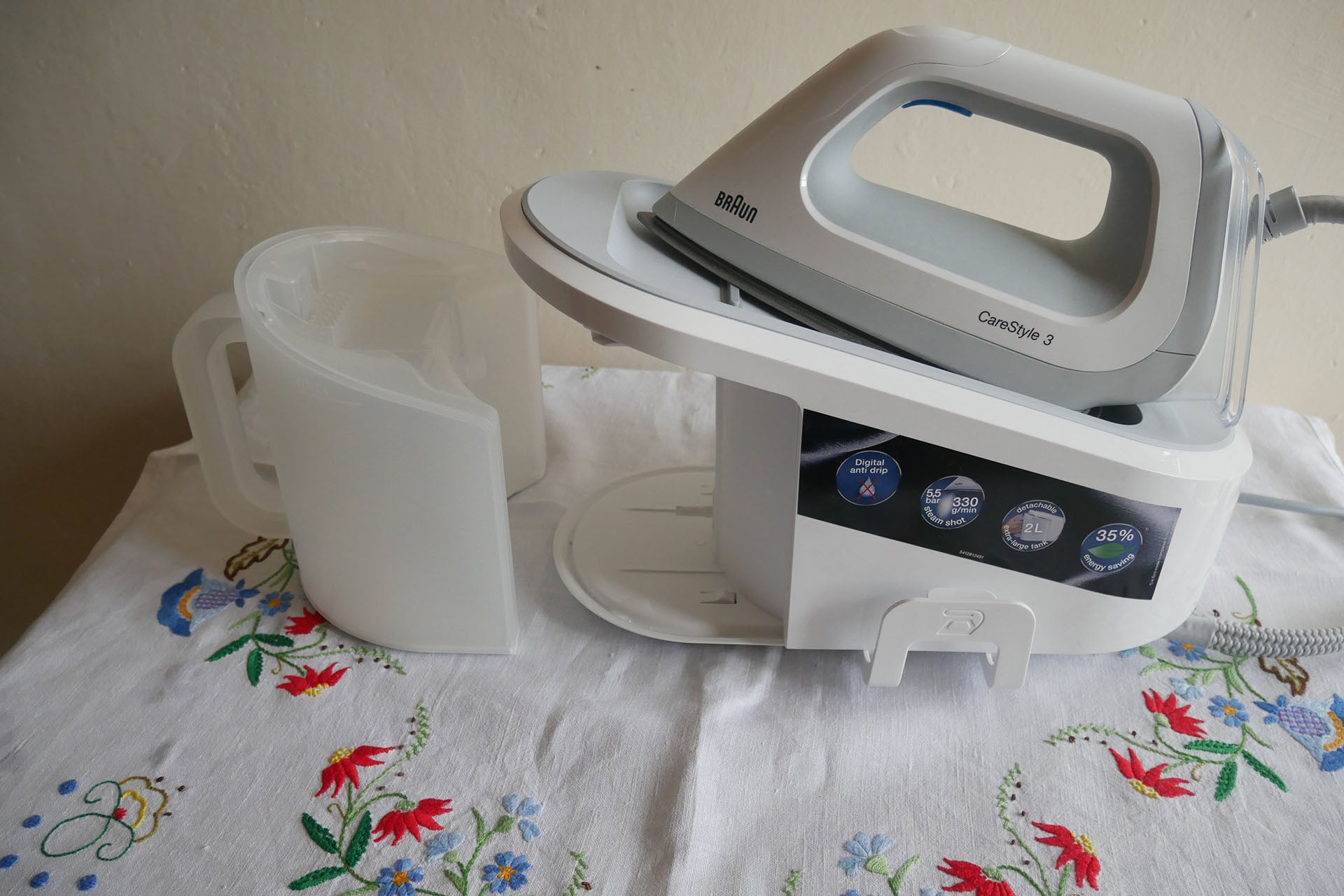 You switch the iron on by pressing the top button on the back of the base unit. The steam button is a trigger on the underside of the handle. If you press it twice within a second you’ll get a continuous steam emission for a few seconds. You press it again to stop it. 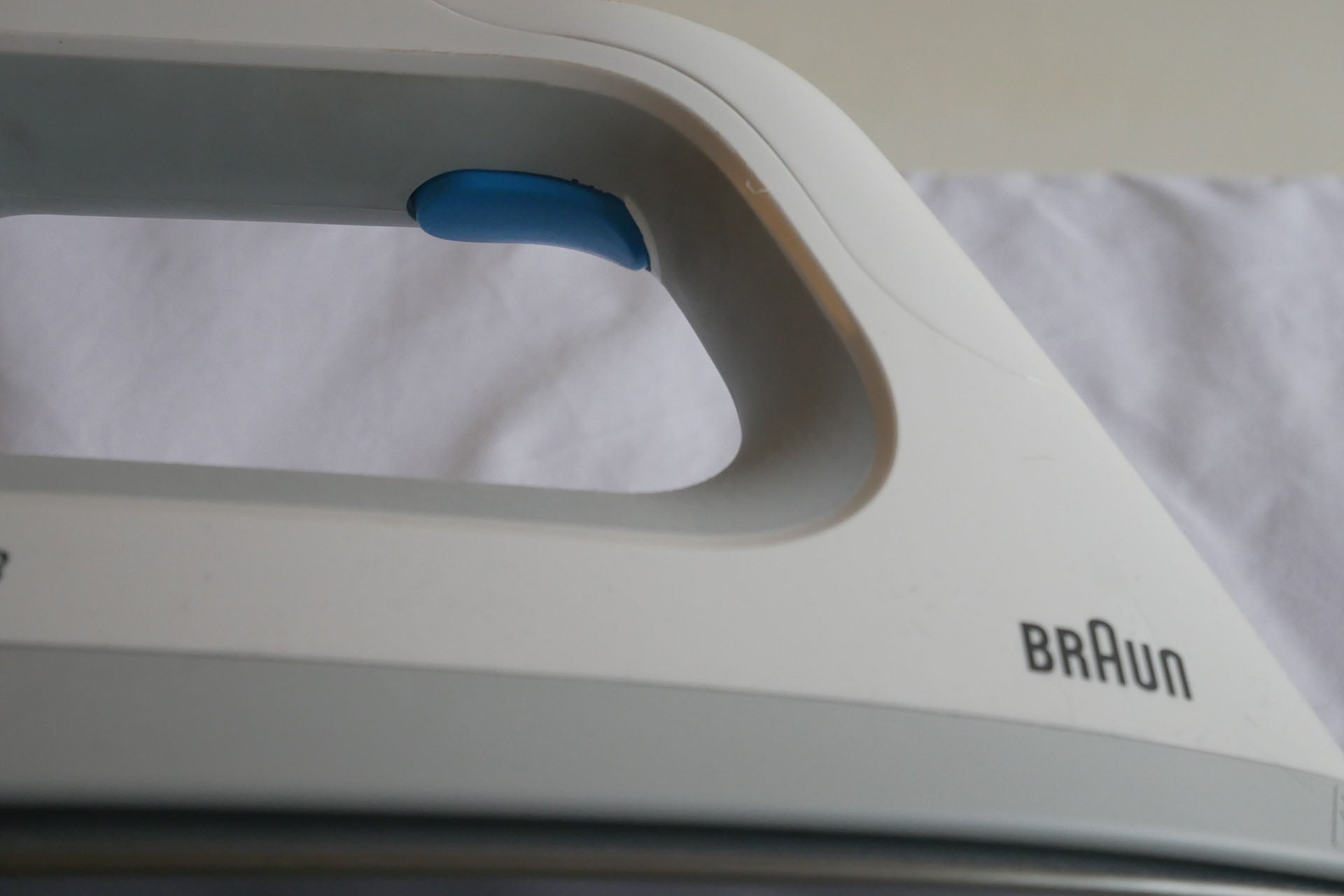 The Braun CareStyle 3 has no dial or display for different temperatures, because you can iron all types of fabric on the standard setting, using less steam for delicates – or to save energy – by pressing the green Eco button at the back of the base unit.

As the iron heats up, the temperature control LED at the front of the iron and the on/off LED at the back of the base unit (with a steam symbol under it) begin to flash. Once the iron is at the correct temperature, both will glow steadily. If you want to iron without steam then there’s no need to press the steam button under the handle. 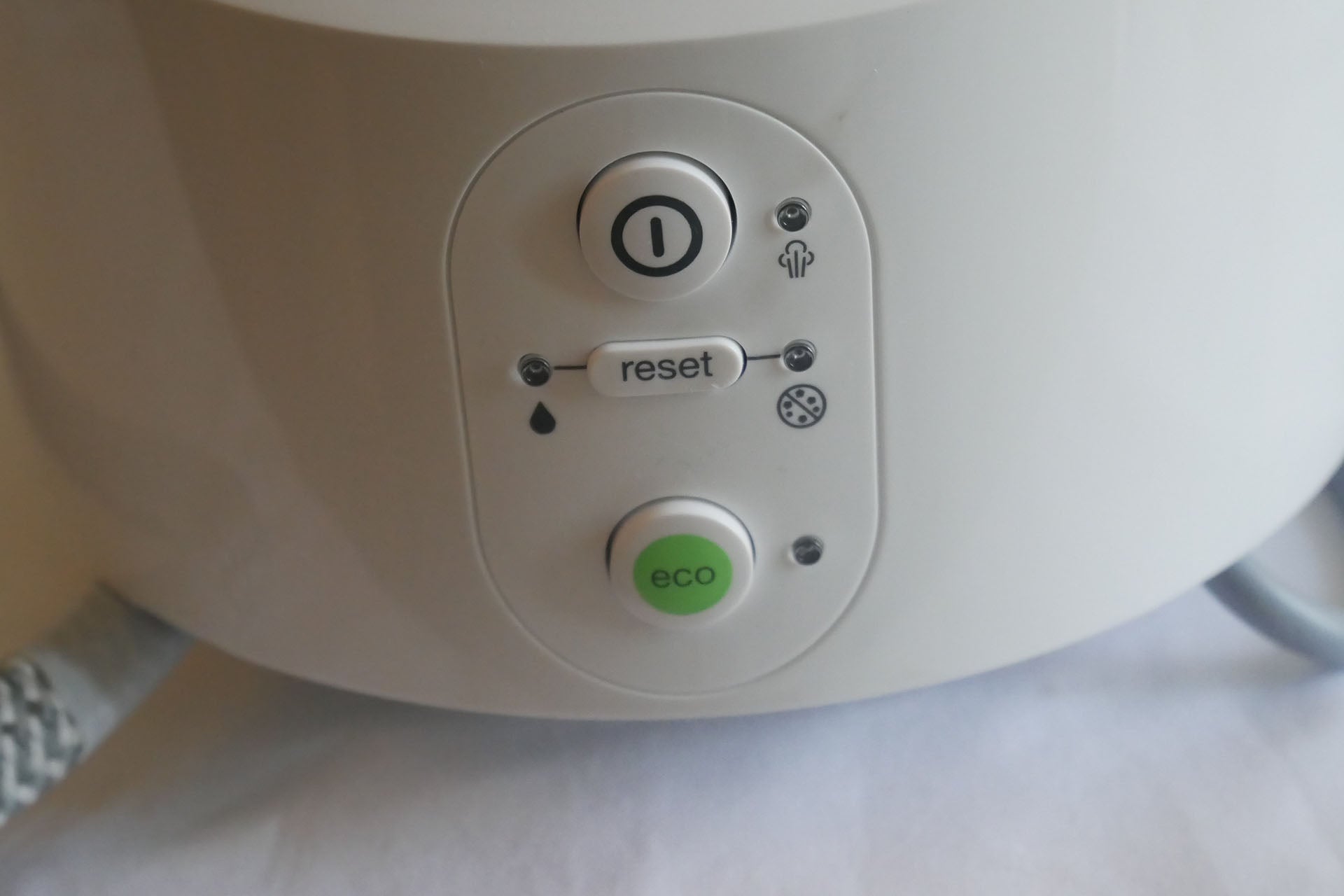 The Braun CareStyle has a simple rounded tip and an Eloxal 3D soleplate. The system needs to be decalcified after every 15 litres of water consumption. A LED on the base unit with a calcium symbol below it will alert you when this happens.

You repeat the procedure before plugging the iron in, switching it on, and pressing the reset button for 5 seconds until the cleaning LED turns itself off.

The Braun CareStyle 3 uses tap water, unless (like me) you live in a hard-water area. In this scenario it’s recommended that you use 50/50 tap water and distilled water.

When I switched on the Braun CareStyle 3, there was a loud buzzing. After 37 seconds the on/off and temperature control LED lights stopped flashing and glowed steadily, the machine made a “pooh” sound, and I could hear the water starting to boil.

There was a wonderful gliding feeling as I ironed, especially on using the steam trigger. It was as if the soleplate was floating on a cushion of air, like a tiny hovercraft. 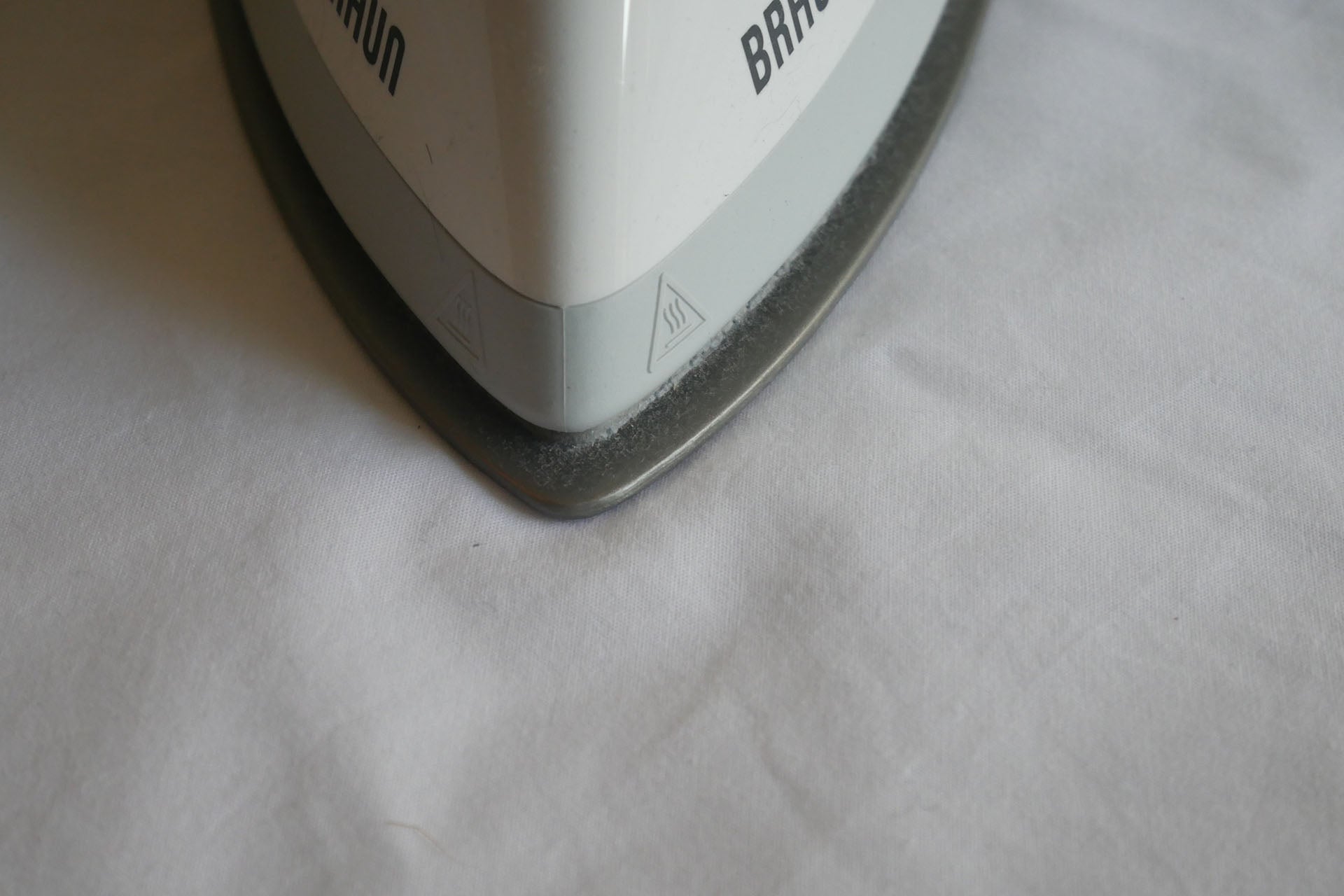 When on the full steam option, the soleplate registered 120ºC. It got nearly all the crinkles out of dry, crumpled linen, and every crease out of cotton-mix fabrics and a heavy cotton shirt.

It gave crisp edges and smoothness all the way through when I ironed a sheet folded in four. When I first began ironing a little water dripped out on to the sheet, but the iron only did it once, and it dried quickly without staining. Braun warns that this can happen the first time you use the CareStyle 3.

The iron’s tip went easily round buttons, and the soleplate also glided over them – the ability to do this is a special feature – although there was a slight feeling of “stickiness” as I ironed over plastic duvet buttons. I don’t think it would be a good idea to linger on them. On its own, the iron weighed in at a rather light 1.1kg. 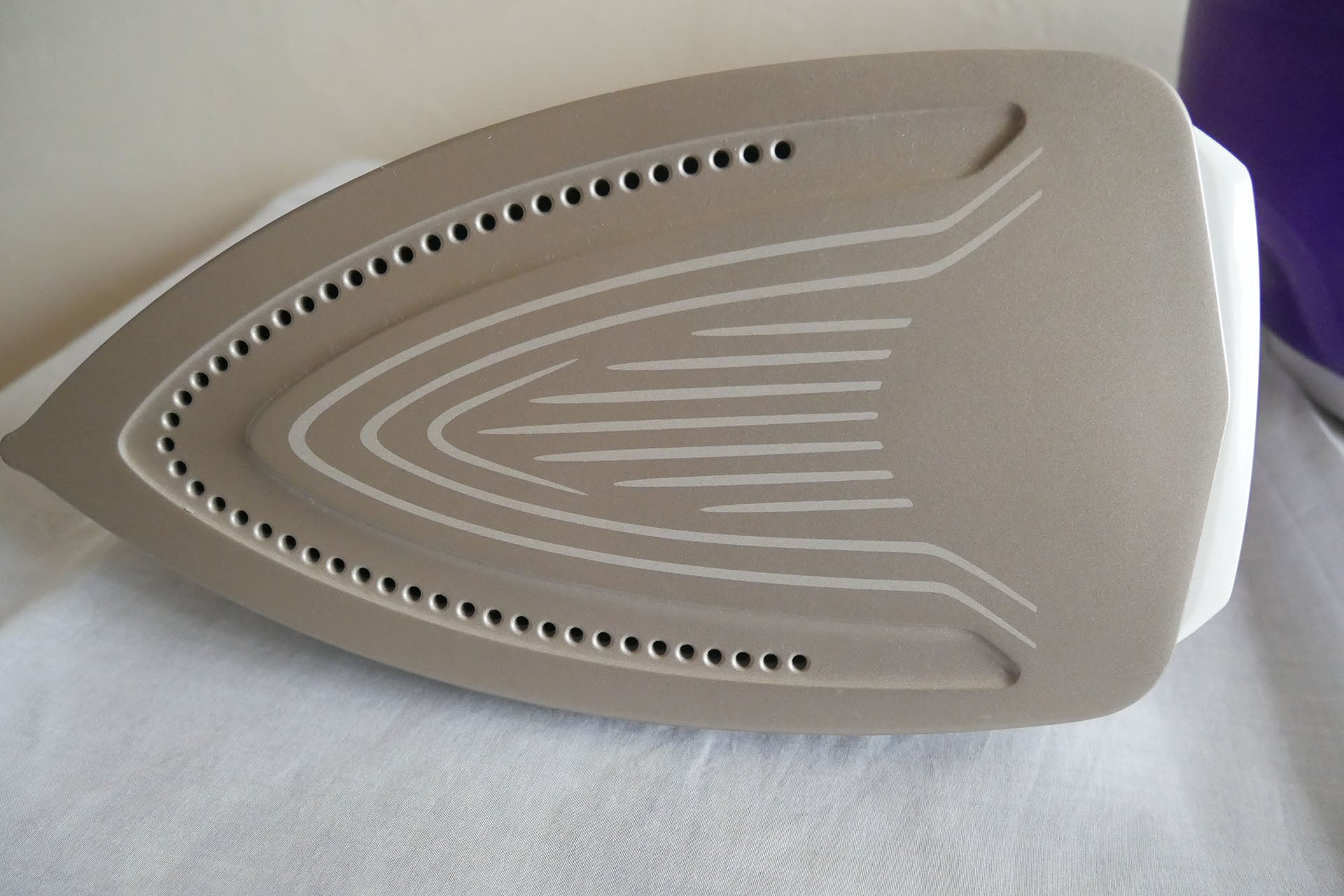 The steam wasn’t too overwhelming. I was ironing in my reading specs, and although they misted up at first, they soon cleared. Even after over two hours at top heat, the windows in my front room still hadn’t fogged up.

On the Eco setting the Braun CareStyle 3 was completely safe tackling artificial fibres such as polyester and silk, and there was no problems with dripping thanks to the digital anti-leak system.

Following 2hrs 10mins of ironing on full heat, the LED light on the steam unit finally began to warn that the tank was nearly empty.

The lead carrying the hot steam from the tank to the iron did get quite hot in use, but not enough to hurt my hand. When I was using the steam trigger I kept forgetting that two quick presses in close succession turned it on for longer; I simply kept pressing the trigger and blasting away, and the iron did what I wanted it to, so the double press ended up feeling like an unnecessary feature.

Descaling the CareStyle 3 took less than four minutes, simply requiring tipping out the steam unit, putting water in, swilling it around and emptying it out. It couldn’t have been easier.

Why buy the Braun CareStyle 3 IS 3042 WH Steam Generator Iron?

If you regularly have piles of ironing to tackle then the Braun CareStyle 3 is superb. It’s far more powerful and steamy than a normal steam iron and its FreeGlide soleplate is a joy to use and makes ironing feel effortless.

The iron is sufficiently compact that you can store it in a drawer, and includes a self-clean function so you don’t need to buy filters.

The only down side is that you have to buy distilled water if you live in a hard-water area. If you iron less, one of our standard models on the Best irons list will do the job – but if you get through a lot of washing then this is the model to buy.