Introduction
Angry Birds has become the most-downloaded mobile phone game of all time, netting more than billion downloads worldwide. Almost three years on, Rovio has kicked off a new franchise in the Angry Birds universe with Bad Piggies. It switches you over to the side of the pigs, and while you may be playing as the baddies, it’s a much more thoughtful game than its grandfather.

Bad Piggies Gameplay
If Angry Birds is all about destruction, Bad Piggies is a game of creation. Rather than asking you to kill pigs, you have to transport them safely(ish) from point A to point B in each level.

You do this by creating a pig-housing contraption out of boxes, balloons, wheels, engines, fans and other such bits and bobs. The most important thing it shares with the Angry Birds franchise, including the spin-off likes of Angry Birds Space, is its basis on physics, and Bad Piggies is a game of judging how gravity will deal with your creation. Older gamers may be reminded of The Incredible Machine, and its comparable fiddling about with wotsits, widgets and doodads. 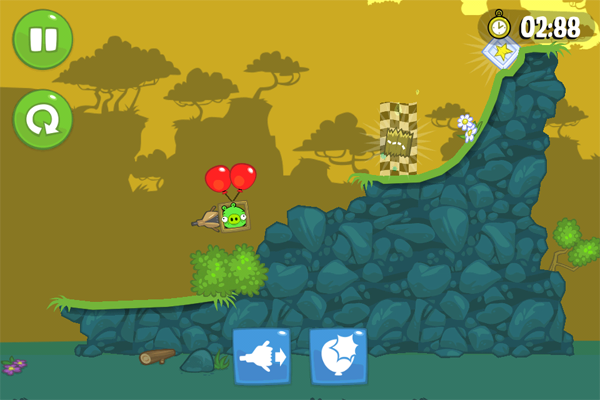 It’s a game of some creativity, but like Angry Birds it starts out slowly. In most levels, you’re fairly constrained in what you can create. You have a grid of squares into which you can place a small selection of components, plus the pig you need to ferry about. Bad Piggies begins as an exercise in making little cars out of a few boxes and wheels, and more experienced players may begin to wonder if Rovio has squandered the potential of such a neat conceit.

However, once you’ve spent a little while tip-toeing through Rovio’s game design baby steps, the app-based game soon opens-up. Multiple ways to finish levels start to appear as Bad Piggies throws a greater array of gadgets your way, often dropping in the odd red herring component that’s more likely to trip you up than send your pig sailing past the finish line. 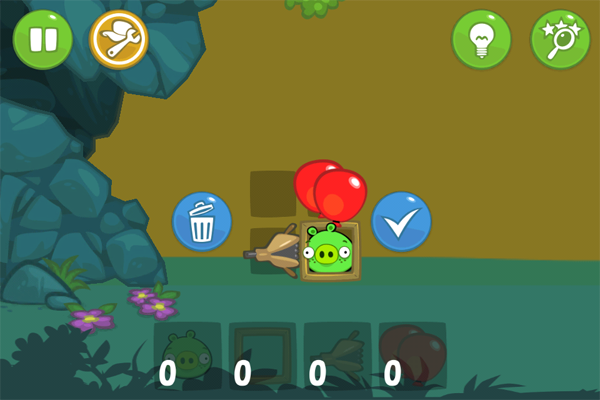 There is quite literally a finish line in each level too, a chequered flag you have to hit, as well as map parts that are essential if you want to earn the now-traditional 3-star rating. And it gets hard, very hard.

Unlike Angry Birds, thoughtless experimentation won’t get you very far in Bad Piggies. A thoughtful, precise solution is often needed, and frustrations will arise, frequently. The pick up and play casual aspect of casual mobile games is diminished here, but it remains deliciously addictive. 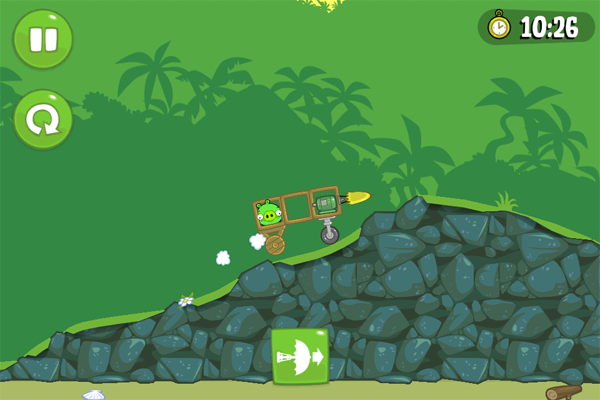 Rovio has constrained what you can do enough to keep Bad Piggies a puzzler, rather than a sprawling mess of physics, wheels and wingnuts. And knowing that there will be a desire to let rip and make a Mechano-style masterpiece, Rovio offers the aptly-named Sandbox.

This is a set of giant levels unlocked once you’ve surmounted the first hump of the Bad Piggies campaign, and it provides a much larger construction grid to really let you let rip. The main story mode is carefully controlled, though. Most of the 60 levels are small, with just a chasm or two to jump, a hill or two to climb.

Each is carefully designed to produce a thrilling little eureka moment, prefaced by a period of head-scratching frustration just short enough to stop you from quitting, or becoming a quivering mumbling mess. Those cunning folk at Rovio seem to have done it again. 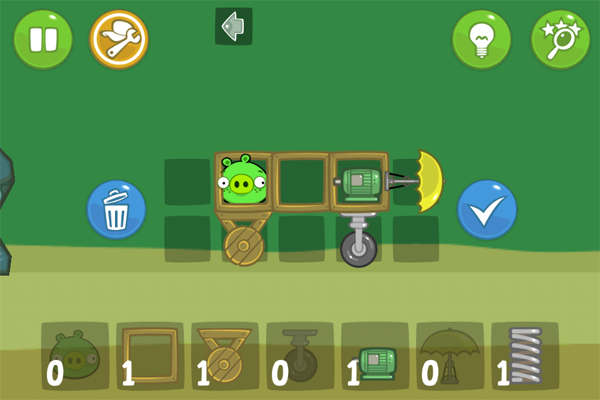 The two-chapter structure lets you tackle two main levels at any one time, but Bad Piggies is otherwise quite ruthless about progression. If you don’t reach the chequered flag, you’re not passing “go”. Not unless you like the game on Facebook or pay real money for the privilege. In-app purchases unlock tokens that produce the requisite creation for you – yes, it’s cheating.

As we found with Angry Birds Space, you can sail through the initial 60 levels in a few hours, however 3-starring the lot will take you a good deal longer. And, this being a Rovio joint, you can expect new chapters with dozens more levels to appear shortly. Fingers crossed, we might even get a level editor this time.

Bad Piggies Verdict
With Bad Piggies, Rovio has done what we hoped it would. It has made something quite different from its most famous creation, but one that keeps the physics heart that has become such an important part of casual gaming. As long as you can handle the frustration, we strongly recommend checking this out.

Note: we reviewed the iPhone version of Bad Piggies. The game is also available on PC, Mac, Android and iPad.