Why not read our 100 best iPhone games ever feature

The Angry Birds series has been around since 2009. That’s a fair old time in gaming terms, and a lifetime on the App Store. However, later instalments Angry Birds Seasons and Angry Birds Rio didn’t change the gameplay formula much. They refined it, sure, but neither made as dramatic changes as Angry Birds Space.

However, Angry Birds Space remains a mix of the familiar and the new. A similar line-up of birds features, and those pigs are still there, under those blocks of wood, stone and metal. And you still fling one at the other using touchscreen gestures you’ll have seen, if not done yourself. 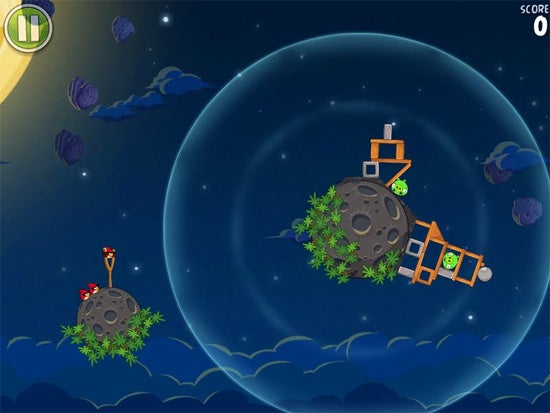 The key difference is in Angry Birds Space’s approach to gravity. This natural Newtonian force is at the core of any physics-based game – the original Angry Birds included – but this one gets to be more playful with it than most.

Levels aren’t just made up of side-scrolling arrangements of small obstacles, but planetoids with their own gravity fields too. Each sphere’s area of influence is shown visually, and – as in real-life physics – the centre of gravity is at the planet’s core.

For the first dozen or so levels, the approach to gravity fields is easygoing. Rovio eases you into the difference between the vacuum of space and the pulling fields, and the notion of playing around a planet rather than along a plane is slowly introduced. This would become dull fairly quickly, but as design experts, Rovio’s designers know when to tweak the formula – as a drip feed of new thrills. 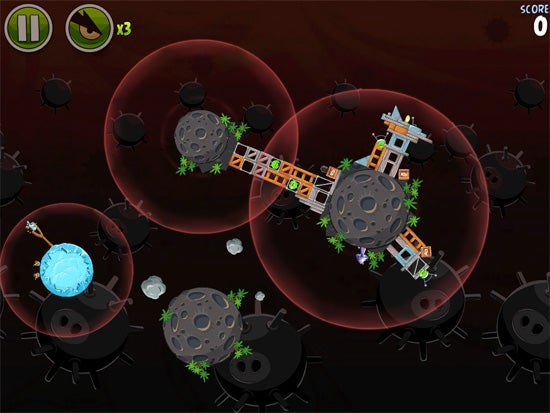 Soon enough you’re dealing with levels where gravity fields intersect, requiring more thought. And occasionally there’s even such a conflict that a new centre of gravity between planetary bodies forms.

Before it all starts to sound a bit like Carl Sagan presents Angry Birds Space, we should say that the approach to gravity here is still very casual. It’s based around consistent physics systems, but doesn’t feel entirely precise – it’s simplified, just as you’d expect from an Angry Birds game, or any casual game. 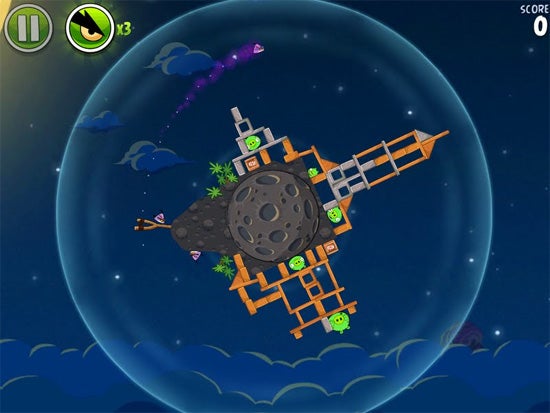 However, it does revitalise the arguably now-stale Angry Birds format, and enables a much more playful approach to level types. Occasionally, there’s a near gravity-free level where you have to bash space detritus into space suit-wearing pigs, which ends up feeling like an interstellar game of pool.

There are also bonus levels in Angry Birds Space, unlocked by smashing special hidden items in standard levels. These feature supercharged gravity, to make your birds bounce around like the balls of a Breakout clone. As the levels are arranged in just this manner, they basically are miniature Breakout clones themselves. 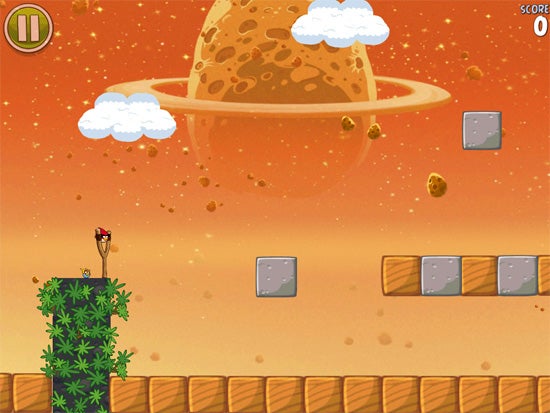 The end of each set of levels is signposted with a neat boss battle too. These will feature something like, for example, a pig in a space-tank that you have to bash by causing floating space rocks to drop on his head. Working with the special levels and the general increase in standard level dynamism, Angry Birds Space does enough to re-awaken the interest of those a bit fed up with the Angry Birds formula.

Spoilers: close your eyes, this is the first boss… 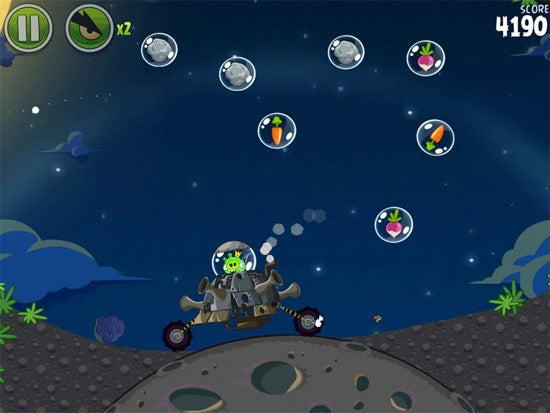 The learning curve is also a little less steep than some of the recent Angry Birds episodes, although, taken as a whole, it needs more thought than the previous earthbound style. You’ll sometimes have to fire a bird around the back of the planet to reach a much closer-but-inaccessible area around the front, and sometimes the levels appear almost upside-down. Space doesn’t think much of our concerns about which way is up. Fun and frustration clash in a way that’s ultimately very satisfying.

At present, the game offers 60 levels set over four planet types – a “normal” one, an icy one, a mine-filled one and the golden Eggsteroids zone, where the bonus levels live. In true Rovio fashion, there’s already another planet under wraps in the level select screen, waiting for the next update.

In-app purchases have made their way into Angry Birds Space, but only in a very minor, (mostly) non-destructive way. Whenever you complete a zone, you’re granted with extra Space Eagle tokens. These are fired from your slingshot and open up a space vortex, unleashing the space eagle, which sucks in any nearby pigs. Although not a sure-fire level-winning tactic, they’re the next best thing. And twenty of ’em will set you back 69p. 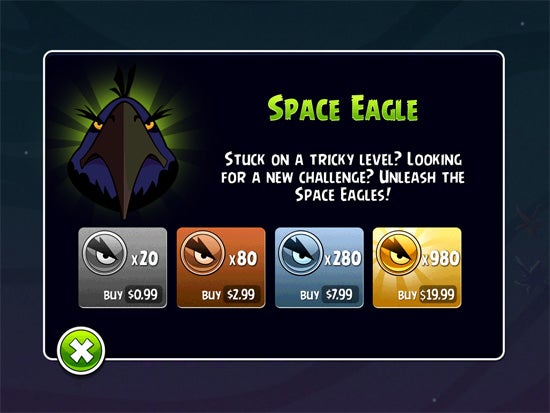 The dreaded IAP – but they are subtle in Angry Birds Space

Angry Birds Space isn’t original in any of its concepts. Interesting gravity games have littered the App Store for years now, and many have had a more intellectual, intense look at the forces of our universe than you’ll see here. But few are quite as fun as Rovio’s latest. Angry Birds Space feels smarter than its predecessors too, and should bring back many – if not many millions – of burnt-out Angry Birds fans into the fold. Watching a pig floating into space creep slowly into a gravity field and fall to its doom – that’s hard to beat.

Verdict
Angry Birds Space takes the series to new territory in more than one sense. Playing with the formula far more than Seasons or Rio ever did, this is perhaps the first true sequel to the original Angry Bids. Sending the birds out to space, Rovio’s playful take on gravity and how it can be manipulated revitalises a formula that’s been milked fairly heavily over the last three years. And its intricacies enable the game to evolve in a gradual way that holds your attention.

More on gaming:
The 100 best iPhone games of all time