Heading into the BeoVision 11-40’s slightly intimidating on-screen menus via B&O’s unfeasibly opulent metal, LCD-sporting remote control uncovers a few interesting features. On the downside, the set doesn’t provide a full colour or gamma management system. But actually, while these controls aren’t available to end users, the set can have pretty much every aspect of its images changed by the engineer who will inevitably install the TV for you.

On the plus side, the amount of audio adjustments B&O has provided is unprecedented for a TV, while pictures will hopefully benefit from an unusually sophisticated – in that it delivers a 360-degree sweep – metering system for adapting pictures based on the conditions of your room.

Plus B&O’s adaptive picture setting seems much more promising than most such systems, not least because a) the TV even wants to know how far away from it you’re sitting so it can perfect its picture algorithms accordingly, and b) it includes an adaptive judder cancellation element that recognises that viewers are less prone to seeing judder in darker room conditions.

One last element of the BeoVision 11-40’s really extensive feature count is its connectivity. Specifically its unprecedented six HDMIs – including one ‘convenience’ socket accessible via a pop-out panel towards the top of the TV’s rear side – and its support for DLNA multimedia playback as well as online features.

High-end, expansively designed TVs don’t always deliver cutting edge quality – presumably on account of the relative slowness of their development processes. However, it takes mere seconds for the BeoVision 11-40 to persuade us that it does not fit into this negative high-end trend. In fact, its pictures are among the very best we’ve seen from an LCD TV. 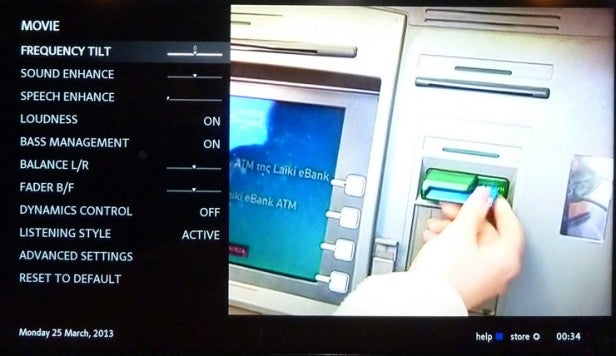 As is usually the case, this excellent picture quality starts with the set’s contrast performance – more specifically, its black level response, which is truly outstanding. Dark scenes benefit from black colours that actually look black rather than the misty grey still often witnessed with LCD TVs. Even better, this excellent black level response isn’t achieved at the expense of too much general brightness, ensuring that dark scenes still look punchy and dynamic, as well as containing plenty of shadow detail.

It’s worth adding that this excellent contrast result was achieved with absolutely minimal set up input from us; B&O’s own automated picture system turns out to be remarkably good, doing a pretty much pitch-perfect job of regulating the set’s contrast, brightness, backlight and colour settings so that the picture looks great no matter what you’re watching.

Having included colour in that list of good stuff, it’s worth dwelling more on the BeoVision 11-40’s colour handling. The first thing to say is that its colours are strikingly bright and punchy, providing a potent and engaging contrast with the inky black levels. Crucially, though, colours also look natural, believable and balanced, as well as containing excellent subtlety that provides more evidence of the strength of the processing engine B&O has put into its latest TV model. 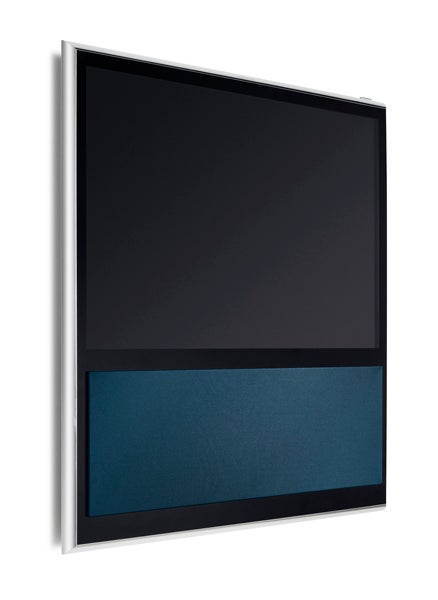 One or two enthusiasts may still find themselves yearning for the extra fine-tuning of a full colour management system, but the vast majority of owners will find B&O’s carefully chosen colour approach to be enormously satisfying.

Just as satisfying is the sharpness. HD images look pristine, with detail galore and pretty much no noise. Yet, at the same time, the set happily resists the temptation to try to over-sharpen HD sources, leaving images looking polished and even.

The set’s processing engine also works excellently with standard definition, upscaling it to the full HD screen intelligently enough to add more sharpness and detail while simultaneously keeping a lid on noise levels.

There are only two minor problems with the BeoVision 11-40’s 2D
performance. The first is some slight motion blurring – but this really
is minor, and seldom detracts significantly from the image’s generally
excellent sharpness levels. The other issue is the very rare appearance
of extremely minor backlight clouding in the image’s corners during dark
scenes. But again, this happens so infrequently and so subtly with 2D
viewing using B&O’s automatic picture mode that it’s hardly worth
mentioning.

Used as the main TV for the review period
Tested for more than a week
Tested using industry calibrated tools, discs and with real world use
Tested with broadcast content (HD/SD), video streams and demo discs
Previous
B&O BeoVision 11-40 Review Next
Pictures, Sound and Conclusions Review