What is the Audio-Technica AT-LP60BT?

The LP60BT is a budget plug-and-play turntable with a difference – you don’t actually have to plug it in to play it. Built-in Bluetooth means you can stream your vinyl directly to a wireless speaker system. Welcome to the 21st century in all its ironic retro-modern glory.

The LP60BT has a very compact footprint. It looks and feels very much like a 1980s midi-system turntable. The size could be a real bonus if you’re looking to save as much space as possible, and the plasticky build is to expected at this price, but this sort of dull-as-dishwater styling should’ve died out with bubble perms and shoulder pads.

I received the black version, but it’s also available in white and I suppose I might’ve felt different about the looks if I’d had that one instead. Maybe. 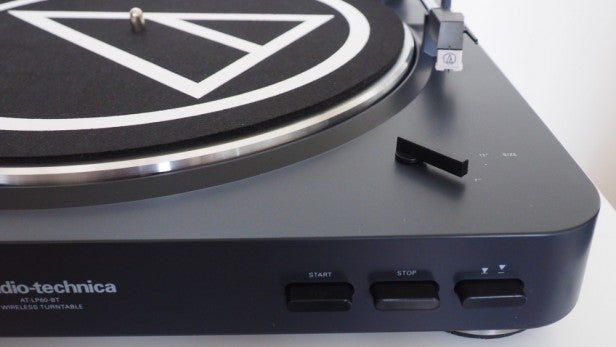 The LP60BT also shares many of the modern (in the 1980s) convenience features of a midi-system turntable, with auto-start, auto-return, and a button to raise and lower the needle. Such things have almost been lost in time.

Other controls on the deck include a button to switch between 33 and 45rpm speeds, a start button, stop button, a lever to toggle between 7-inch and 10-inch records – so the auto-start knows where to place the needle – and an LED-lit button to activate the Bluetooth.

Around the back is simply a 3.5mm stereo output that’s switchable between a pre-amplified line output and a phono output for plugging into a separate phono stage or dedicated phono input on any amps that still have such a thing.

The platter is a belt-driven, cast-metal item that’s admittedly more substantial, and likely to generate a more stable flywheel effect, than the cheap platters on those midi decks of old. It’s topped by a felt mat with a large Audio-Technica logo on it. Bit DJ-ish for my liking, but 18-year-old me would’ve liked it. 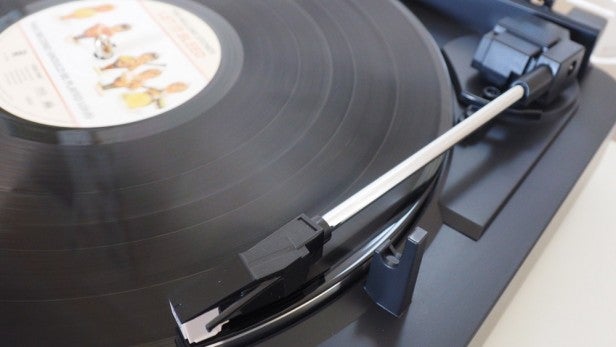 The tonearm is a simple metal tube with a plastic counterweight at one end and at the other a plastic headshell that holds a moving-magnet cartridge with a diamond stylus. Neither the arm nor the cartridge are upgradable, but the stylus can at least be replaced, for around £15.

According to my digital gauge, the tracking force of the cartridge on the test sample was set at 3.8g, which is a little excessive and may cause more wear to your vinyl than you might like. If you listen to the same records over and over, you might start to degrade them a little over time with the LP60BT – more so than with a proper hi-fi turntable such as the Flexson VinylPlay. For casual users it’s probably not severe enough to worry about, though. 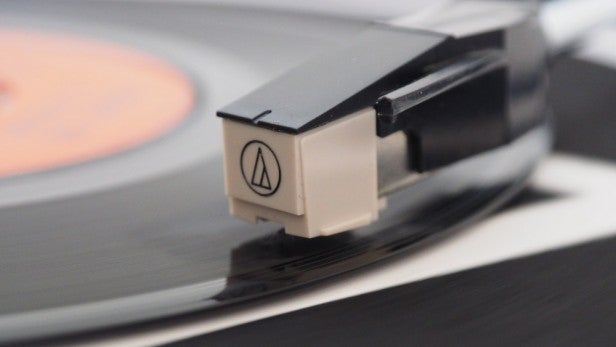 The LP60BT comes with a dust cover attached, and there’s a 45rpm record adapter that sits in a round depression moulded into the back-left of the plinth.

Setting up the Audio-Technica LP60BT is almost as simple as it gets. Having placed the platter on the spindle, you reach through one of the holes in the platter to hook the drive belt around the motor pulley, place the mat on the platter, and then you’re ready to connect the turntable to your sound system.

There’s really no reason to buy the LP60BT ahead of the standard LP60 if you’re not going to use its wireless connectivity, so I paired it via Bluetooth to a Denon DRA-100 network receiver that was connected through its pre-outs to my main hi-fi system. 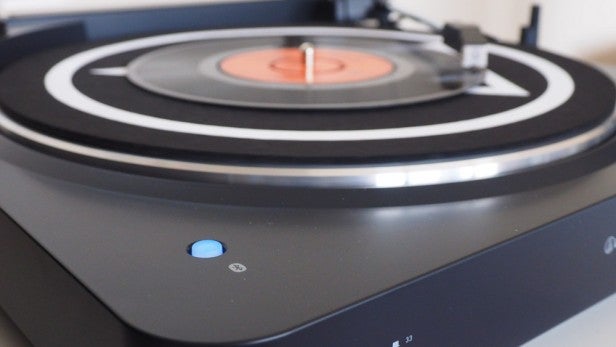 Pairing is done by placing the LP60BT next to your Bluetooth-enabled device and holding down the turntable’s Bluetooth button until it flashes purple twice, after which it alternates blue and red to denote that it’s in pairing mode. It then lights solid blue to signify that it’s paired. Quick and simple.

Setting the correct speed and record size, I just pressed Start and let the deck do the rest, automatically lifting the tonearm and swinging it over the record before dropping the needle gently into the lead-in groove.

There was a strange experience of hearing the music popping quietly off the vinyl itself about two seconds before coming out of the speakers. That delay jarred with me, so thereafter I made sure I dropped the lid as soon as I hit Start.

The LP60BT sounds surprisingly musical. Tunes bounce along nicely, with a fulsome sound that makes everything quite palatable – nothing I listened to made me grimace or sigh. Digging through a stack of old 45s, I picked out Pacific Gas & Electric’s “Staggolee” – surely one of the great B-sides – and the LP60BT really let that funky blues loose. 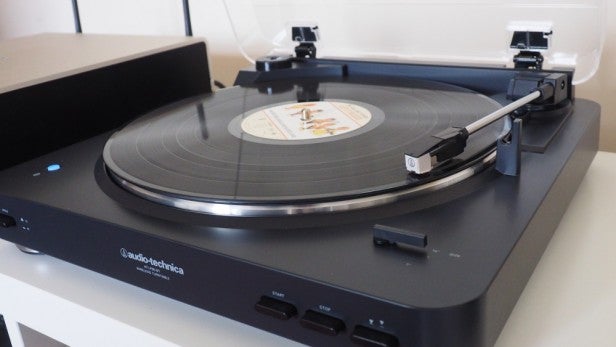 Where the LP60BT falls short of “proper hi-fi” turntables is its lack of detail and subtlety, and in the narrowness of its soundstage. With intimate acoustic recordings I just didn’t quite make that emotional connection or achieve that sense of being with the performer, and grander recordings didn’t sound grandiose enough to truly immerse me.

That said, a Bluetooth turntable isn’t likely to find its way into particularly high-end audio setups that can take advantage of that extra scale and subtlety. The fact that it makes vinyl sound warm and fun will be enough for most owners. 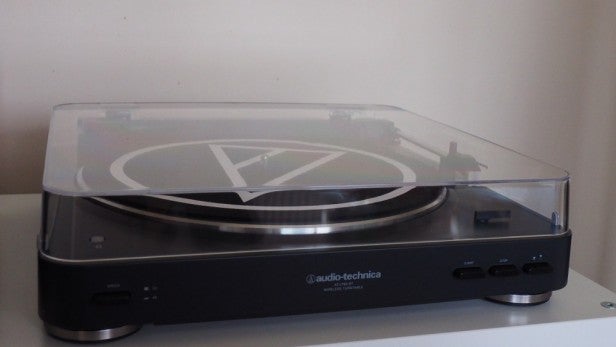 Should I buy the Audio-Technica AT-LP60BT?

The LP60BT is a super-convenient, super-simple and compact vinyl solution. It sounds pretty good for what it is, and the added benefit of Bluetooth streaming makes it a neat budget option for modern, casual record fans.

If you’re a little more serious about your vinyl and your hi-fi, though, I’d suggest spending that bit extra for the impressive (and upgradable) Flexson VinylPlay.

This Bluetooth-streaming turntable sounds more attractive than it looks.