What is the Pro-Ject RPM 3 Carbon?

The RPM 3 is an evolution of Pro-Ject’s successful Genie belt-drive turntable series, which managed to combine affordable prices with the curvaceous styling more often seen on high-end models.

Despite visual similarities to its forebears, though, this is a significant upgrade, with the notable additions of a de-coupled motor and a 10-inch, S-shaped tonearm.

To anyone used to more traditional turntables, the RPM 3’s curvy L-shaped plinth will seem rather alien. One end of the L serves as a mount for the tonearm, the other has a hole that helps to correctly position the freestanding motor unit; the centre houses an inverted bearing with a ceramic ball, upon which the vinyl-topped platter sits. 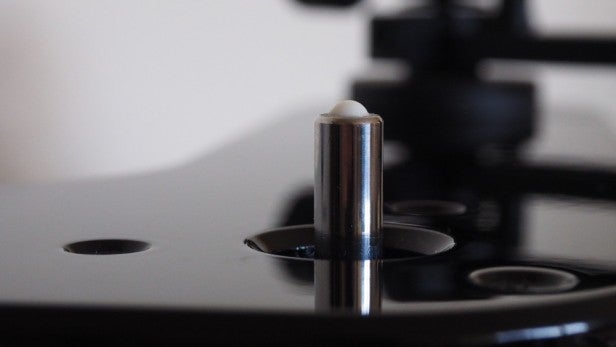 The RPM 3 is available in a choice of black, white or red for the plinth and the lower part of the sandwich platter. The plinth stands on three conical feet that end in sharp-ish points, and three small, indented metal plates are provided into which you set the feet.

Pro-Ject, based in Vienna, isn’t a company that’s keen on sticking to a single template for tonearms, with a variety of lengths and shapes throughout its range. In this case it’s opted for something really rather unusual in the turntable world: a 10-inch, S-shaped tonearm. With the exception of the 10-inch Jelco SA 750 E, S-arms are more traditionally 9-inch, with a few 12-inchers floating around for some of the more exotic record players that can take the longer arms.

Even more unusually for an S-shaped arm, this one is made from carbon-fibre – as are most of Pro-Ject’s tonearms. It looks wonderful: it’s glossy and beautifully kinked, with an integrated headshell, a magnetic anti-skate mechanism and a lift. 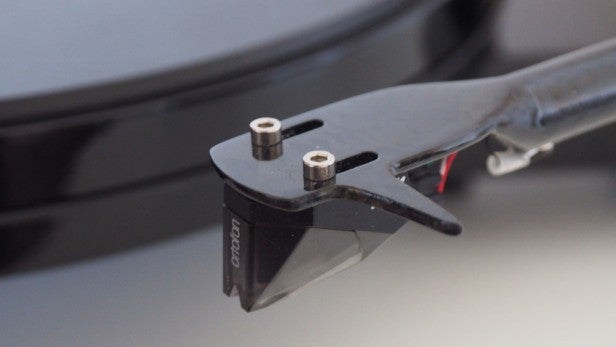 Pre-fitted to the arm and ready aligned is an Ortofon 2M Silver MM (moving magnet) cartridge, worth around £150. Replacement styluses are available for £75 each, which is handy if you’re a little clumsy or give your record players heavy use.

As with most Pro-Ject decks, the tonearm cable on the RPM 3 connects directly down to a pair of RCA phono sockets and a ground terminal on the back underside. This means you’ll be able to fit your own choice of stereo interconnect cables to hook it up to your hi-fi, although Pro-Ject provides a pretty decent set of cables in the box.

Aside from the lift on the tonearm, the only real control is the on/off switch on the motor unit. Changing between 33 and 45rpm speeds is achieved by simply hooking a finger around the drive belt and moving it between the upper and lower motor pulleys – upper for 33rpm, lower for 45rpm. There’s a basic plastic spider supplied for fitting in the centre of 45s. 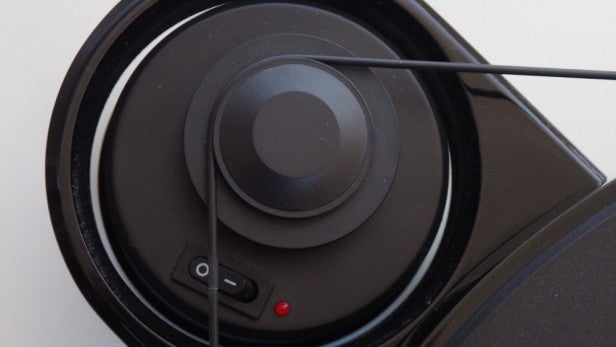 The fit, finish and styling is all top-notch. Because of the plinth shape, it’s also more compact than you might expect – useful if you keep your turntable on a sideboard rather than a dedicated hi-fi rack.

What you don’t get is a lid or record clamp, both of which are optional extras costing £60 and £30 respectively – not a huge amount in a world of crazily priced hi-fi accessories.

The RPM 3 comes out of the box with the cartridge already fitted, so most of the initial setup involves fitting the platter and attaching the drive belt around the motor pulley and the platter. This is a fiddly job, since the platter isn’t the thickest. It’s worth using a simple bubble level to check the deck is level; sadly, Pro-Ject doesn’t include one.

After that you’re down to the more tricky task of setting the tracking weight for the cartridge. There’s a simple mechanical tracking-force gauge supplied, which also has an integrated alignment protractor that will come in handy if you ever decide to replace that Ortofon cartridge. 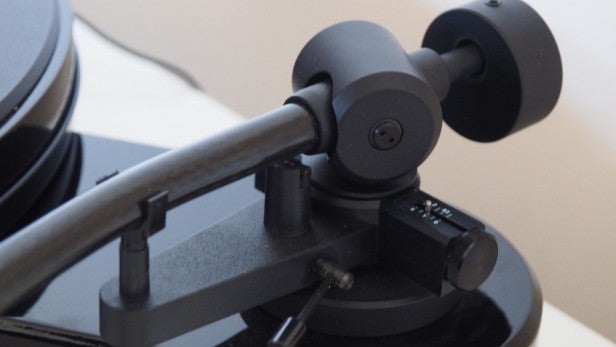 Actually altering the tracking force isn’t too friendly, though. The counterweight on the back of the tonearm is held in place by a single grub screw, for which an Allen key is supplied. However, I found it tricky to smoothly move the weight in the very tiny increments necessary to fine-tune the downward force of the needle. Still, once done, you won’t need to touch it again.

Since the RPM 3 is no entry-level record player, it doesn’t have a phono pre-amplifier built in – you’ll need to budget extra for one. I plugged it into the sublime Leema Acoustics Elements Ultra phono stage for testing, but Pro-Ject itself makes some more affordable phono stages that would suit a mid-level deck such as this.

There can be a slightly alarming squeal from the belt and pulley when you first switch on the RPM 3’s motor, but it’s nothing to worry about. I encountered the same with a Pro-Ject RPM 10 I once owned.

Once up and spinning, the sound quality from the RPM 3 is excellent. There’s tons of the warmth that’s the hallmark of vinyl, and it creates a lovely wide soundstage.

It’s a little too laid back for my liking, though. It lacks a little attack and becomes congested in the mid-range with complex tracks. Percussion can sound too restrained at times – listening to “Blood Pt2” from the “Dark Was The Night” LP, the lack of bite seemed to almost slow the track down.

Stick to material that’s less critical of slightly off timing, such as Iron & Wine’s Our Endless Numbered Days, and the RPM 3 is more at ease and has a wonderfully delicate touch with vocals. Listening to “Fever Dream”, Sam Beam could almost have been in the same room as me, plucking away and tenderly singing through that luxurious beard.

Should I buy the Pro-Ject RPM 3 Carbon?

The Pro-Ject RPM 3 is a striking deck that sounds almost as good as it looks. However, a slightly laid back presentation of music means it isn’t the best all-rounder. The more prosaic-looking Rega Planar 3 2016 is the better buy in this price range, but not by a huge margin.

A decent turntable that sounds almost as good as it looks, but isn’t quite the best at this price point.