However, let’s move onto what the Zenfone 6 is all about, the great big screen. It’s a 6-inch display, a middle ground between top-end phones like the Samsung Galaxy S5 and small tablets like the Nexus 7.

For some it’ll be the perfect compromise. You can still fit in your pocket (just about), but it’s also large enough to work as a decent little miniature TV/tablet. 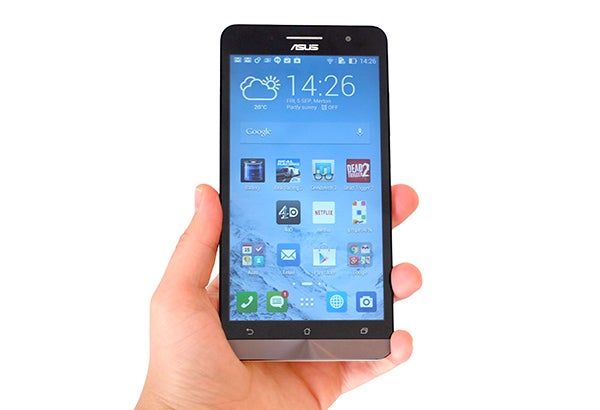 The is an issue, though. Resolution is just 720p, and for a phone of the Zenfone 6’s stature, that’s not a great deal.

The display looks a good deal softer than it would with a 1080p panel. It’s quite noticeable compared to something like the LG G2. There’s no ‘Retina’ level sharpness here, so be aware if that’s going to be a deal-breaker.

The clarity is still decent – 1,280 x 720 pixels at six inches gets you 245ppi – but it really does feel like things have moved on, even at this price. 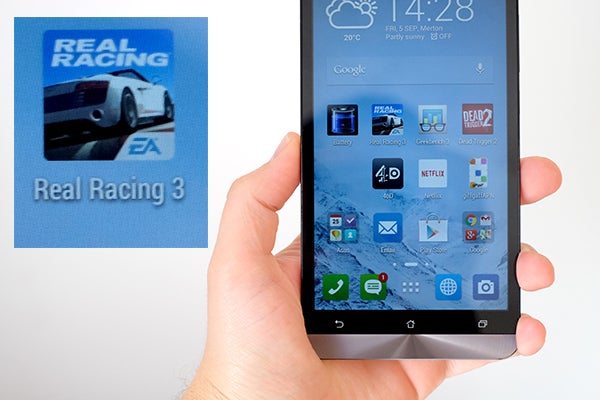 The Zenfone 6 screen is not obviously pixellated, but it is a bit soft

However, after using the phone for a week or so, we found that the actual results are still pretty good. As you tend to hold the phone a little further from your face, in normal use you’re not confronted by the lower-res display in a truly distracting way.

And sometimes having a bigger screen is better than having a smaller, sharper one. For example, to use as a little screen while you’re at the gym the Zenfone 6 is great. It’s also arguably superior for watching films on during a work commute than a 1080p 5-inch screen: although that’s open to debate.

Actual screen quality aside from pure sharpness is very good, if predictably not quite on the level of the top-end phones. 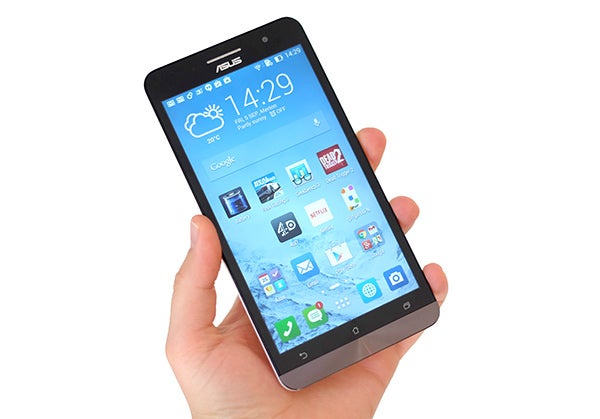 The Asus Zenfone 6 uses an IPS panel, the kind used in most high-end phones. It offers good, mostly natural-looking colour and good viewing angles. These are just as important boxes to tick as the resolution one, and Asus also offers some customisation over the tone of the screen through Asus Splendid.

This app lets you alter the temperature and saturation of the screen. We reduced saturation a tad from the  out-of-box settings for a more natural look, but the slider’s there if you like your colours a little more intense than natural too.

Where the Asus Zenfone 6 reveals it doesn’t quite have a screen to match, say, the Xperia Z3, is with its slightly worse black level and a very slight colour tint when viewed from an angle. These are minor issues, though, and the people bothered by them are likely to also be turned off by the resolution.

The Zenfone 6 is in a tricky spot. There aren’t many high-profile 6-inch Android phones and last year’s ones like the Sony Xperia T2 Ultra have already slipped off shelves. We ended up pretty happy with the Zenfone 6’s screen, but it’s noticeably worse than some 5-inch alternatives that don’t cost much more – we’re talking about the Nexus 5 and LG G2. So make sure you need that extra inch.