What is the Asus VivoBook S410U?

The VivoBook S410U is one of Asus’ more slim and portable laptops, serving up a 14-inch screen with quite narrow bezel, packed into a lightweight chassis. Despite that slender build, you still get Intel Core i7 smarts and some solid all-round specs, to satisfy more demanding users.

In fact, this machine is remarkably similar to Asus’ own VivoBook S510U, but it’s even more compact. So is the Asus VivoBook S410U an ideal travel companion for students, professionals and everyone in-between?

Read next: Best laptops you can buy right now 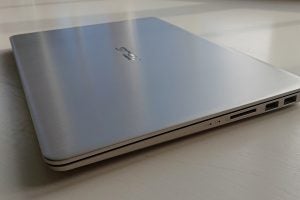 If you’re after a portable laptop to carry around all day, every day, then it’s good news. The VivoBook S410U is quite slim and light, making it well suited to life on the road.

That silver chassis weighs 1.43kg and is roughly 2cm at its thickest point. You won’t struggle to wedge it inside any reasonably sized backpack or case, nor will you feel it weighing down on your shoulders. That said, we wouldn’t quite describe the device as ‘ultra-thin’, like Asus does on its website.

Note that you can grab the VivoBook in two different colours. Our model was ‘Star Grey’ – in other words, ‘standard laptop colour’ – but it’s also available in ‘Icicle Gold’. Nope, we haven’t seen any golden icicles either, but perhaps we simply aren’t drinking the right sort of tea. 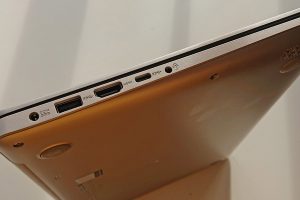 The VivoBook S410U’s brushed-metal lid looks rather snazzy, suggesting quite a premium device. Sadly, this effect doesn’t spread to the laptop’s interior. Open the lid and you’re presented with a dull, monotone finish that looks quite plasticky under certain lighting conditions.

The palm rests show a little flex, too, although nothing that suggests poor build quality. In fact, on the whole the laptop feels solidly constructed, right down to the just-stiff-enough screen hinge.

Lining the sides of Asus’ laptop is the standard array of ports. You get four USB connections (two 2.0; one 3.0; and one super-nippy Type-C 3.1), so there’s plenty of room for attaching peripherals. On top of that there’s HDMI for display output, and an SD card reader to copy files on or off the machine.

Read next: Top ten tips when buying a laptop

I’m generally a fan of Asus’ keyboards and the VivoBook S410U once again doesn’t disappoint in this regard. Although it feels a little spongy towards the middle when your typing gets furious, that didn’t impact my speed. Those isolated keys are perfectly sized and spaced apart, so I managed to smash out entire book chapters or reviews in record time.

Although only a 14-inch machine, each key is given plenty of room, to reduce mis-hits when touch-typing. Only the cursor keys are ever so slightly squished up, inhabiting just a single row. All the same, I never struggled to use them, even with my eyes glued to the screen.

Enjoy slugging out an essay at 4am with the taste of stale alcohol lingering on your tongue? Well, that keyboard is also backlit, with three levels of brightness from which to choose. So you can work until dawn without disturbing your sleeping mate. 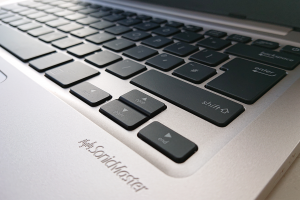 Beneath the board is a fairly spacious touchpad for a 14-inch laptop. This actually proved to be perfectly usable, responding accurately to our swipes, no matter how gentle or violent. Multi-touch support means you can scroll through web pages and documents with more than one finger, again with beautiful responsiveness.

The pad is even well positioned in the centre of the palm rest, rather than shoved off to one side. And glory behold, clicking the corners to simulate mouse button pushes didn’t send the cursor skidding off across the screen. Surprisingly, quite a rare find – even in 2018.

That 14-inch ‘NanoEdge’ display boasts a Full HD resolution, so you can expect videos, photos and everything else to look nice and sharp. Visibility is strong, too. Images darken only slightly as you move your head from a central position, while the anti-glare screen coating fends off reflections on sunny days. Brightness levels could be a little stronger, however. The panel tops off at 250 nits, which means watching dark movies outdoors is a thankless task.

Sadly, the display doesn’t bend all the way backwards, halting at around the 135-degree mark. And if you’re hoping to edit photos on this machine then you might want to look elsewhere.

When I tested the colour accuracy of the VivoBook S410U, the results were rather shocking. Just 63% of the sRGB range is covered, while the figure dips to a measly 49% for Adobe RGB. Don’t get me wrong, the colours don’t look washed out or distorted when you’re watching a movie. But don’t expect hues to be naturally reproduced. 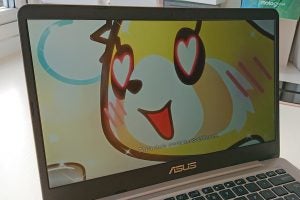 As always, Asus has included its ‘Splendid’ app to configure the screen output. There’s a Vivid mode, which seems to do little more than increase saturation levels. However, the Eye Comfort mode is good for those aforementioned late-night sessions. This produces warmer colours, which is less harsh on the old peepers when you’re hunched over the display in a darkened room at silly o’clock.

A pair of speakers sit beneath the Vivobook, which pump out reasonably powerful audio on demand. Of course, the fact that the sound isn’t directed at your face means the audio is muffled a little.

As for quality, it’s perfectly fine for enjoying a flick or a bit of YouTube. However, if you want to listen to some tunes while working, I’d still recommend plugging in headphones. Sound is a little muddy through those speakers, while bass-heavy songs don’t exactly shine. 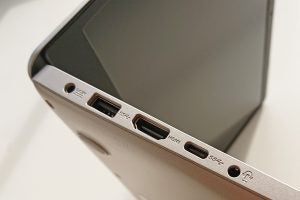 You can grab the Vivobook S410U with a selection of different SKUs, depending on your budget and performance demands. The model I reviewed packed an Intel Core i7-8550U chipset clocked at 1.8GHz, and backed by 8GB DDR4 SDRAM.

The results are absolutely fine for everyday use, while more demanding applications also run smoothly. Multi-tasking didn’t prove a problem, either. You can stream media, play around with memory-sapping editing software and run background tasks all at the same time, with no evidence of slowdown.

Of course, there’s no dedicated graphics, with the VivoBook using Intel’s integrated solution instead. This is fine for photo editing and playing older or simpler games. However, if you want to get any more demanding titles on the go then you’ll have to bump up your budget and look for a laptop with a proper dedicated GPU.

As for the 256GB SATA3 SSD, we saw read speeds of 526MB/sec and write speeds of 444MB/sec in our benchmark testing. That’s about what I’d expect from a laptop at this price, and means no delay or buffering when you’re playing HD movies or loading large applications. 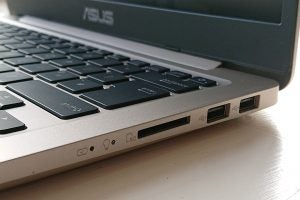 Battery performance is about average on this laptop. If you’re performing basic everyday tasks such as working in Google Docs then you can expect between five and six hours of life on a full charge. Not quite enough to fill a working day, so you’ll want to pack the (thankfully, not too cumbersome) charger.

In the standard Trusted Reviews battery test, which runs a non-stop loop of video and web browsing until the laptop dies, the VivoBook S410U managed six and a half hours.

Why buy the Asus VivoBook S410U?

Anyone hoping to stay productive on the move should be more than happy with the Asus VivoBook S410U. As long as you don’t want to play the latest games and the lack of colour accuracy doesn’t bother you, this 14-inch laptop proves perfectly amenable. Typing is a joy on that backlit chiclet keyboard, while the reasonably slim and light finish means portability isn’t an issue. 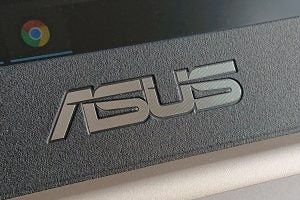 Of course, at £900 this isn’t an affordable device. By stretching towards the £1000 price point, the VivoBook S410U is practically in range of some truly fantastic machines such as the Dell XPS 13. Dangerous territory indeed, especially given some of this machine’s faults.

I’d say shop around, as you can get more for your money at this level.

The VivoBook S410U is a perfectly good portable pal, but shows too many flaws considering its near-£1000 asking price.