Asus’ VivoBook Pro laptop range offers strong performance at a decent price. While many rivals such as the MacBook Pro and Dell’s XPS 15 cost well over a grand, the new N580VD lands safely below. Yet despite this gulf in asking price, the Asus machine still boasts some strong specs, including Nvidia’s GeForce GTX 1050 graphics card.

So how does the VivoBook fare when compared with the competition, and is the rest of the laptop as strong as those specs suggest?

Crafted from aluminium, the latest VivoBook looks suitably sleek and shiny. A brushed-metal surfacing covers the lid and continues into the laptop’s interior, adding a touch of class. It’s a simple design with very little flare or pizzazz, similar to the likes of Apple’s MacBook Pro. 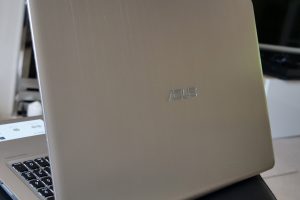 Asus bills the VivoBook Pro 15 as slim and light, although I wouldn’t say it particularly impresses in either area. In terms of dimensions and weight, this laptop is similar to Asus’ own ROG G501, which packs stronger specs and an even more powerful graphics card that needs intensive cooling.

The N580VD certainly isn’t chunky, but the screen is surrounded by quite a thick bezel that adds considerably bulk. You won’t be able to fit the device into any kind of compact backpack or bag.

You get a comprehensive array of ports slapped on the sides, for connecting peripherals and other bits. Three Type-A USB ports are joined by a reversible Type-C connection, which can be used for fast data transfer. Handy when hooking up a 4K monitor, for instance. You also get a traditional HDMI port, while Ethernet and an SD card reader round off the list. 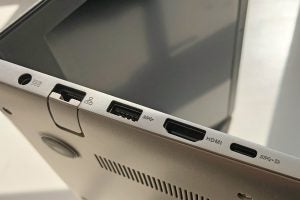 If you plan on doing a lot of typing, the VivoBook’s keyboard should prove well up to the task.

Asus knows how to throw together a decent board and this chiclet effort boasts responsive keys and a quiet typing action. Although the travel distance could do with being a little longer, I found the laptop comfortable to type on, even for extended periods. Touch-typing was also a cinch, thanks to the well-sized keys.

You get full backlighting for working at night, too. This can be stepped through various grades, to suit your environment.

There’s just enough space for a numeric pad over on the right side – although, unfortunately, Asus has crammed this right up against the rest of the keyboard. There’s no spacing at all, which means it’s easy to mis-hit one of the keys when working by touch. Also crushed up in all of that mess are the arrow keys, which you’ll constantly have to look to find. 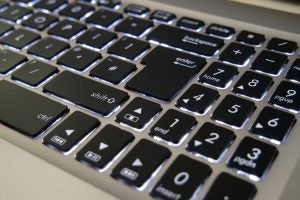 I quite like the spacious touchpad, which is sunken into the palm-rest beneath the keyboard. It’s pushed a little too far over to the left, but it’s perfectly responsive to your multi-fingered swipes and pinches.

Although the VivoBook Pro 15 sports a 15.6-inch Full HD panel, sadly, those visuals are weak. Sure, images are sharp enough, but the display disappoints in pretty much every other area, especially given the device’s near-£1000 asking price.

For one, colour reproduction is woefully inadequate. A mere 58% of the sRGB range can be accurately reproduced, dropping to 43% for Adobe RGB. In other words, any creative professionals should look elsewhere for their next work machine. Check out the LG gram or Apple’s MacBook machines if you want realistic visuals. 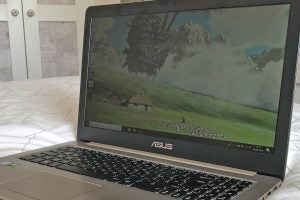 As usual, you can dive into Asus’ Splendid utility to activate a low-light mode, which produces warmer images for more comfortable night-time viewing. You can also toggle the Vivid mode, although this merely seems to boost the brightness levels a smidgen. Visuals are still rather drab and lifeless.

Viewing angles are also frustratingly narrow. Begin to tilt the screen away from your face and visuals become murky, while the colours transform instantly.

Although the harman/kardon name is emblazoned on the VivoBook Pro 15’s chassis, you shouldn’t get too excited. Audio quality is decent, producing respectable amounts of bass and a good top volume. However, the speakers are mounted on the bottom of the chassis, so any output is immediately muffled.

All the same, I was happy enough watching some shows or a bit of YouTube on this laptop as I worked in a noisy kitchen. Clarity and power levels are fine, to cut through everything except a blender in full-on blitz mode. 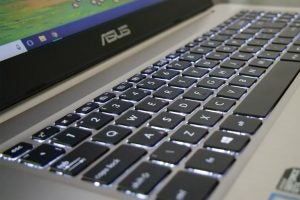 There can be no doubt that the highlight of this Asus machine is the performance. Stuffed inside of that aluminium frame is Intel’s Core i7-7700HQ chipset, a Kaby Lake processor that offers plenty of power for all manner of tasks.

Helped along by 8GB of RAM, I found that the VivoBook Pro 15 was up to anything I threw its way. Likewise, benchmarking tossed out some very respectable scores for a sub-£1000 laptop.

It’s also pleasing to see dedicated graphics in the VivoBook Pro 15, in the form of Nvidia’s GeForce GTX 1050. That’s a step up from the 940MX Nvidia GPU found in Lenovo’s IdeaPad 720s, still one of our favourite laptops around this price point. 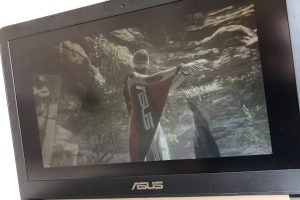 While this can’t quite match the most dedicated gaming laptops around, the VivoBook is still perfectly capable of playing quite demanding games on high detail levels. All with a fluid frame rate, to give you the best possible chance in fast-paced action titles. It’s a definite step up from the graphics abilities of most other laptops around this price point.

A dual-fan system helps to keep the N580VD cool throughout and this seems to work effectively. The rear end of the laptop heats up a little during heavy play sessions, although it certainly isn’t to any worrying degree. Of course, the sound of those fans whirring when they hit maximum levels is a little noisy – but, again, doesn’t compare with some of the most super-powered gaming laptops out there.

Asus includes a generous amount of storage, to suit anyone who downloads a lot of apps or works with massive files. Unfortunately, the bulk of this – 1TB, to be precise – comes in the form of a SATA hard disk drive. In addition you get a 128GB SSD, for any programs that demand speed.

Sadly, battery life is another weak point, mostly thanks to those power-sucking components. However, even if you use the VivoBook Pro 15 for quite light tasks, such as web browsing and music streaming, you’ll still only get around four hours of play time per charge.

This real-life testing was backed up by the Trusted Reviews benchmarking. A basic loop of browser action and video playback returned 5 hours of life before the laptop died.

Considering the sub-£1000 asking price, I’m impressed by the performance on offer. You can play the latest games with a respectable frame rate, even on quite high graphics settings, as if using a dedicated gaming laptop. All while the machine stays relatively cool.

However, in quite a few other areas the VivoBook Pro 15 falls woefully short. The display is substandard and battery life, too, is poor. If serious dedicated graphics are a must, I’d recommend bumping up your budget for a better all-round package.

Otherwise, Lenovo’s IdeaPad 720s boasts most of the same advantages and less of the disadvantages, for roughly the same asking price.

Although the VivoBook Pro N580VD excels for performance, the display is substandard and other faults keep it from being an easy recommendation.