Asus has been seriously innovative the last few years, starting off a winning creative streak with the original Asus Eee Pad Transformer which culminated in the Transformer Infinity, to be followed by the no less revolutionary PadFone and its gorgeous successor, the Asus PadFone 2. Now it’s trying its hand at yet another product like no other, the Asus Taichi Ultrabook.

The Taichi (a name that syncs nicely with Asus’ previous Zenbook) is a laptop like no other. It has not just one 1080p IPS screen, but two – and we’re not talking about a slide-out affair like the Lenovo ThinkPad W701ds. 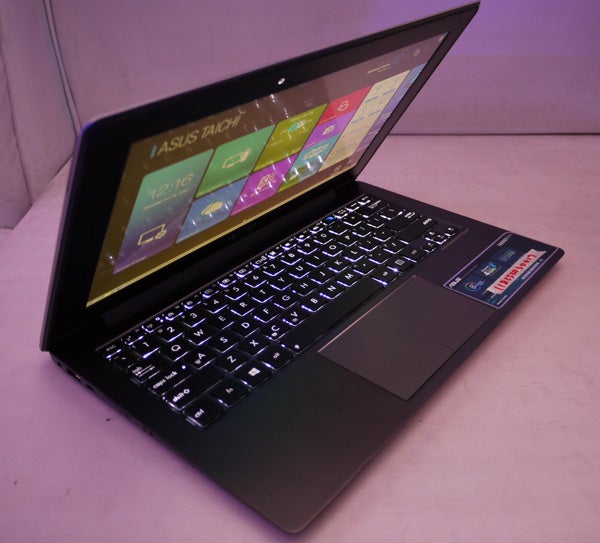 With the Taichi, its lid is a second screen, and one that supports both touch and a pressure-sensitive stylus. This means that, when you ‘close’ the ‘laptop’, this little machine turns into a tablet, but one with all the connectivity and power of a regular Ultrabook – and naturally, it’s running Windows 8 to make full use of this feature.

There will be two Asus Taichi models, the 11.6-inch, 1.25kg Taichi 21 and the 13.3-inch, 1.55kg Taichi 31. Size aside, the only difference between the two, erm, sizes is that the smaller of these innovative Ultrabooks drops the SD card reader found on the larger ultraportable. Everything else, from specs to screen resolution and connectivity, remains the same. You’ll have to wait till 2013 to get your mitts on the 13-inch Taichi though. 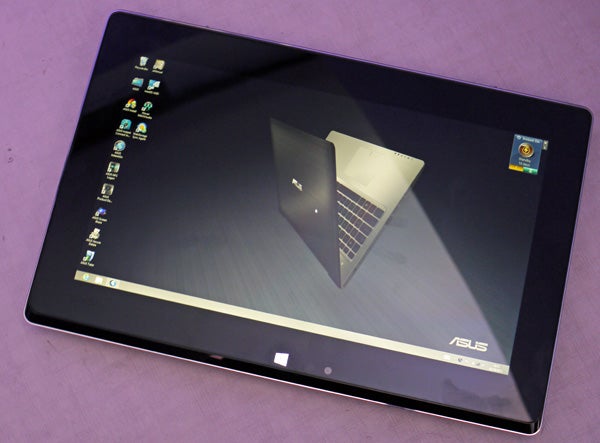 Very like Asus’ Zenbook, the Taichi sports a gorgeous, brushed aluminium unibody chassis. The difference this time ‘round is that the outside of the lid is toughened Corning glass, which protects the ‘top’ screen.

Though the entire top is inevitably glossy, Asus has thankfully gone for a matt black screen bezel and the ‘inside’ panel sports a matt finish too. Yay. 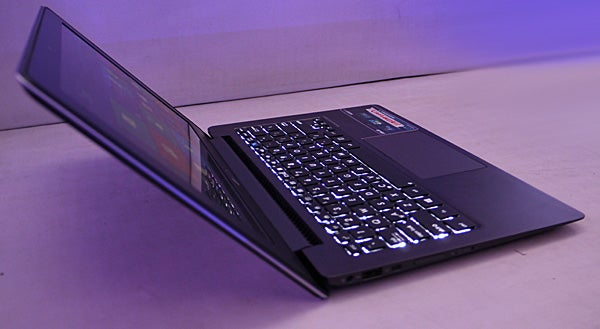 What’s truly remarkable is that, despite stuffing in up to a Core i7 processor, twin 1080p screens, a backlit keyboard, and a whole load of other gubbins, the TaiChi still manages an incredibly svelte profile at just 17.6mm.

The only downer to this lovely design is that the glass ‘lid’ picks up fingerprints like nobody’s business, but then that’s common with tablets. 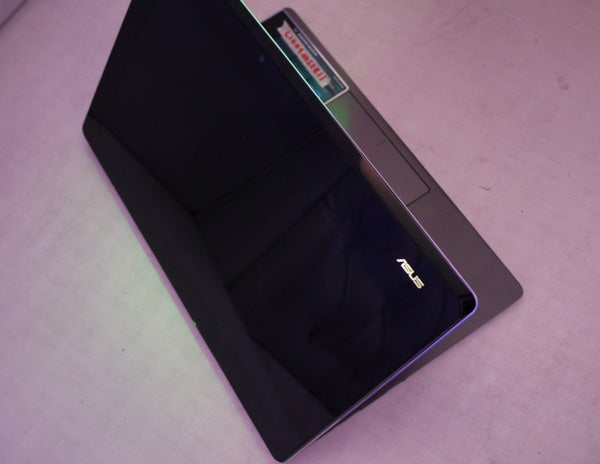 This slim tablet/laptop hybrid manages to pack in a lot of connections too. There’s a miniVGA port (boo, but at least it’s unobtrusive), microHDMI, twin USB 3.0s and a headphone/microphone jack. On the wireless front we have the usual Wi-Fi N and Bluetooth 4.0 pairing, with no 3G option at this time.

Typing action is more than adequate on the Taichi, with a bit more feedback than we remember from the Zenbook. As with most premium Ultrabooks, the chiclet keyboard is fully backlit too. 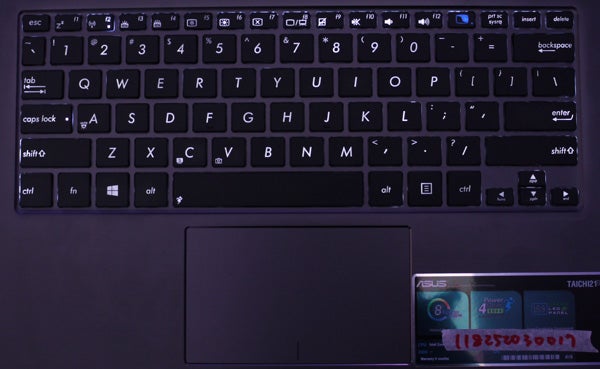 The massive trackpad is lovely to use and of course supports Windows 8 multi-touch gestures. Interestingly, the Taichi’s ‘inner’ screen doesn’t support touch, so this definitely a necessity when using it in ‘laptop mode’.

While we’re very stoked to find that the Taichi supports a pressure-sensitive stylus for drawing and handwriting, it’s a shame that Asus went for an N-Trig solution. Unlike Wacom’s digitizer and stylus, the N-Trig ‘only’ offers 256 pressure levels, and needs a battery to run the pen. 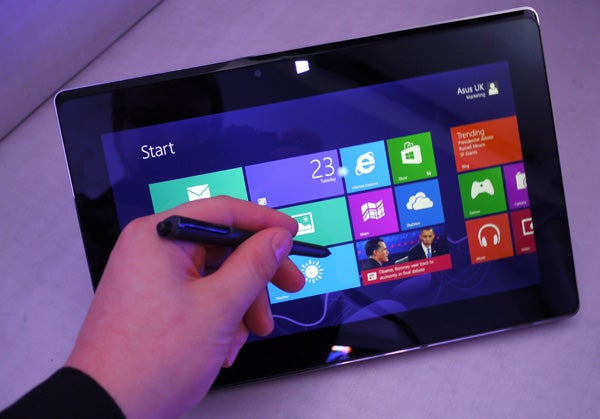 That stylus in the image above is actually a Wacom one, which doesn’t work with the Taichi. It’s there for illustration purposes only, as the Taichi’s own N-Trig pen was unavailable.

This is especially odd when Asus’ own ‘budget’ Vivo Tab convertible tablet gives you that very Wacom stylus, with 1,024 pressure levels, a battery-free pen, and an incredibly useful eraser nib.

As mentioned, the Taichi’s inner screen doesn’t support touch. The outer screen in the lid does though, with up to 10 fingers very usable on its smooth glass surface. Naturally, with Windows 8 at the helm everything is very digit-friendly. 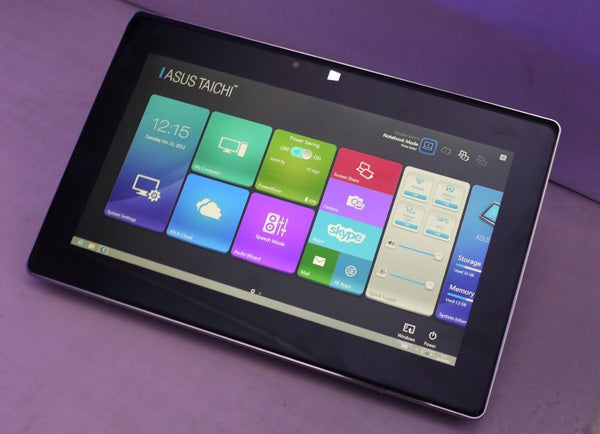 What’s better than one 1080p IPS screen in an Ultrabook? Why, two, of course. It’s astonishing to think that each of these lovely panels represent some of the best screen quality we’ve yet seen in any laptop, yet here Asus manages to fit two in a single device.

Don’t like glossy? The inner one is matt. Want touch or pen? The outer one supplies that. It’s like there’s something for everyone, and the high-res, Retina-like screens provide superb sharpness, contrast and viewing angles. 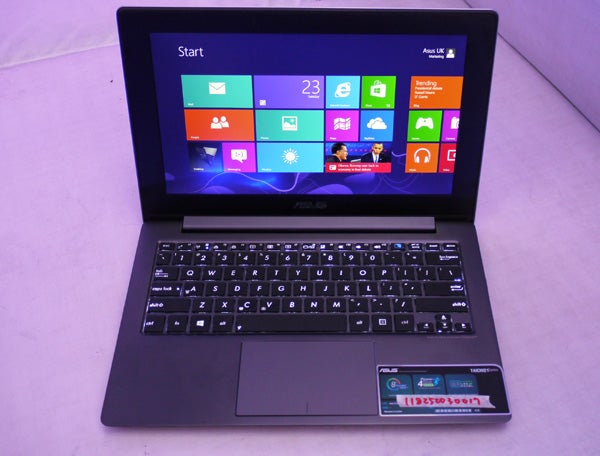 You can even use both of them at once. Asus supplies some innovative software that lets you mirror, extend or switch between the Taichi’s two screens. Just imagine a two-player game of Battleship on this laptop… the possibilities are many, if also slightly confusing.

Asus has given its most premium laptop/tablet a decent set of HD snappers, with a 720p one at the front (when in laptop mode) and a 5megapixel, 1080p rear shooter for the tablet.

We’re told the laptop’s IcePower speakers, which were developed in collaboration with Bang & Olufsen, sound great – but this was difficult to test in the noisy event environment. 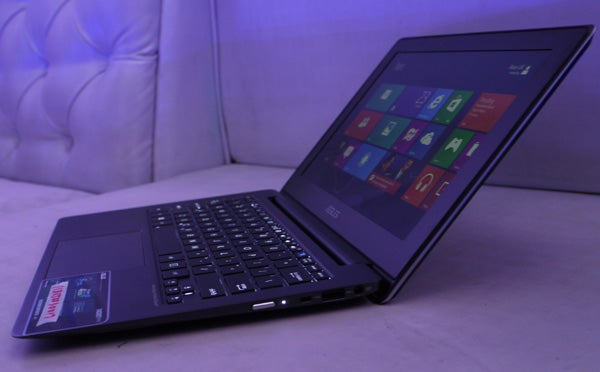 Asus claims up to five hours from the Taichi 21’s 35Wh battery and up to seven hours for the 13.3-inch Taichi 31, which sports a 53Wh unit. This is pretty much in line with current Ultrabooks of similar sizes, and if these figures hold up it will be very impressive indeed, as the batteries here need to power two screens as well as some serious specs.

Considering everything you get in Asus’ Taichi, the £1,499 asking price for the 11.6-inch model with a Core i7 and 256GB SSD is a veritable bargain. Keep in mind that you’re getting dual 1080p IPS screens that offers quality putting most other laptops to shame, as well as a premium chassis and digitizer stylus. 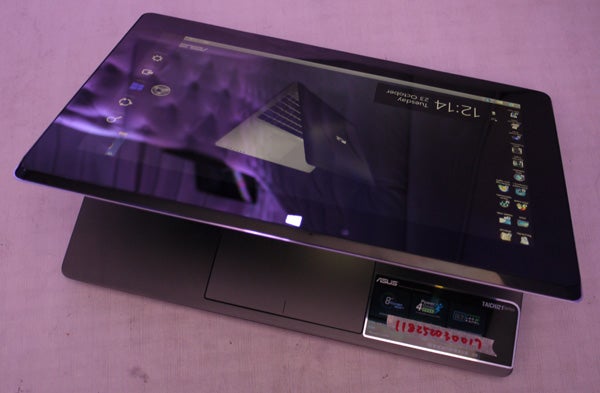 Asus is once again at the cutting edge of innovation with its Taichi Ultrabook. It’s a beautiful, unique piece of technology that represents some seriously impressive engineering. However, while the Transformer and Asus PadFone made a lot of sense, the Taichi might be more divisive. It’s a great laptop and a great tablet, but having two screens does feel a little like excess. Still, since you appear to pay no premium for this feature, it’s hard to see a downside, and we can’t wait to give this Windows 8 device a full review.