Asus has been back in the spotlight since its netbook glory days recently, after producing one of the most hotly anticipated tablets (and the keyboard dock to turn it into a netbook equivalent) with the Transformer Prime. Among all the hype regarding the most premium Android tablet going it’s easy to forget that the company is also a huge player in the laptop market, and we’re checking out its slim and stylish 13in Zenbook, the UX31.

Like the Acer Aspire S3, the UX31 is an Ultrabook. Ultrabooks are Intel’s new ultraportable laptop standard that’s making serious headway in the premium laptop sector. To qualify, entrants need to be stylish and quick-booting, under 22mm thick, weigh 1.4kg or less, last a minimum of five hours away from a socket, use some form of flash-based storage (though this can be hybrid, combining an SSD cache with a HDD) and of course sport an Intel ‘Sandy Bridge’ processor. 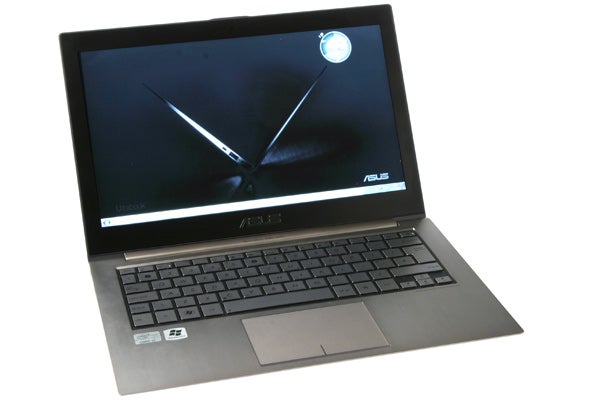 So what does the Zenbook bring to this category? Like its competitors it’s metal-clad, with a concentric ring pattern on its lid. It beats most rivals on connectivity by offering not only USB 3 and a bundled USB-Ethernet adapter but also twin digital video outputs, has a class-leading screen resolution of 1,600 x 900, comes with an SSD as standard, and includes a carrying case. Overall then, its sub-£1,000 MSRP (currently UK availability is limited, though the 11in UX21 can easily be found for £840) seems like pretty decent value. 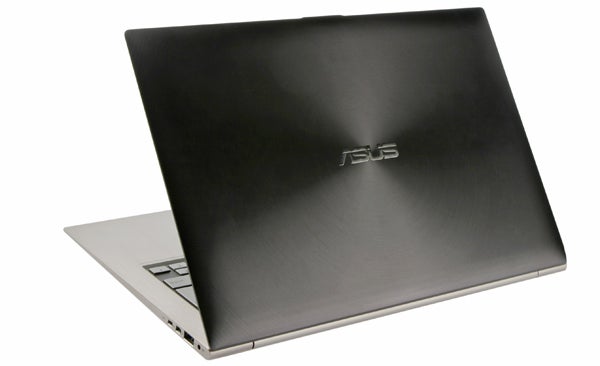 Let’s start off with design. The ‘Zen-inspired’ concentric ring pattern across the lid, which lends this Ultrabook range its name, looks very stylish and helps the UX31 to stand out from the crowd. Unfortunately the lid is still fingerprint prone, more so than the Aspire S3 and certainly more than the MacBook Air 13in. Still, the included carrying case and cleaning cloth go some way towards addressing this. 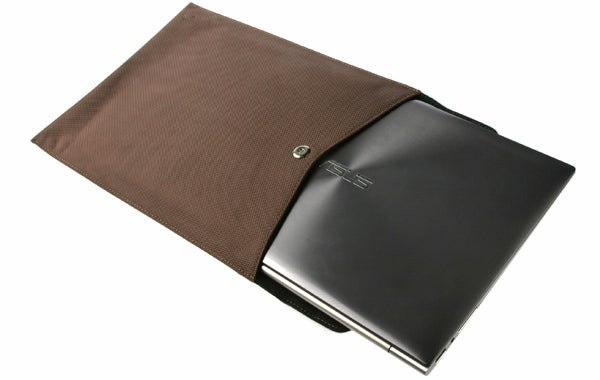 Opening the Zenbook up to reveal its brushed-metal keyboard surround, it still lacks the ultra-stylish minimalism that makes Apple’s machines such design statements. This is due especially to the screen’s dark-brown bezel, though whoever decided to make the obligatory Windows and Intel stickers silver deserves a word of praise. It’s also worth remembering that in its own right Asus’ creation is still one very attractive laptop, and the only element we actively dislike is the cursive “UX31 Ultra Slim Series” text above the keyboard.

Build quality isn’t quite up to the Air standard. Don’t get us wrong, the Zenbook’s aluminium, ‘unibody’ chassis feels very solid, but there’s just a tad more give here and there. Mind you, it’s still head and shoulders above the average laptop and more than holds its own against other Ultrabooks.

Despite eschewing the use of lighter magnesium alloy for all-round aluminium, the UX31 weighs the same as Acer’s S3: 1.4kg on the dot, just light enough to stay within Ultrabook limits and more than portable enough  not to cause discomfort when carrying it around for extended periods. It’s also incredibly slim, tapering from 17mm to an Air-rivalling 3mm at its thinnest end.

With the exception of the Toshiba Z830, which manages to cram in three USB ports and Ethernet, connectivity on the UX31 pretty much leads the Ultrabook pack. On the left you’ll find a standard USB 2.0 port, 3.5mm combi headphone and microphone jack, and SDXC card reader (a feature that’s missing on the smaller UX21, as it is on the 11in MacBook Air).

The right side is home to the power jack, a fast USB 3.0 port, and both micro DisplayPort and HDMI video connections. As far as we’re aware this makes it the only ultraportable that you can hook up to two digital displays simultaneously without an expensive DisplayPort adapter. On the wireless side of things we get the usual Wi-Fi N and Bluetooth combo. 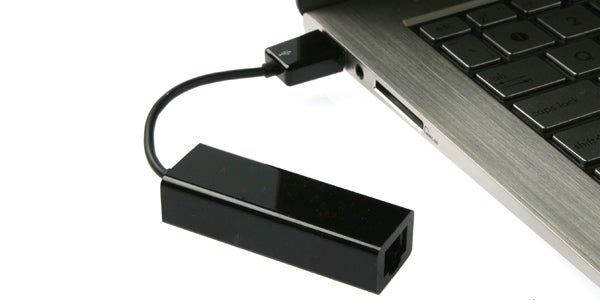 Asus further enhances the package by throwing in a micro-HDMI-to-VGA adapter and a USB-to-Ethernet one. Not only this, it provides a little nylon and leatherette carrying pouch for them too. But the generous accessories aren’t the only things the company provides a case for, as the laptop itself gets a matching sleeve too. 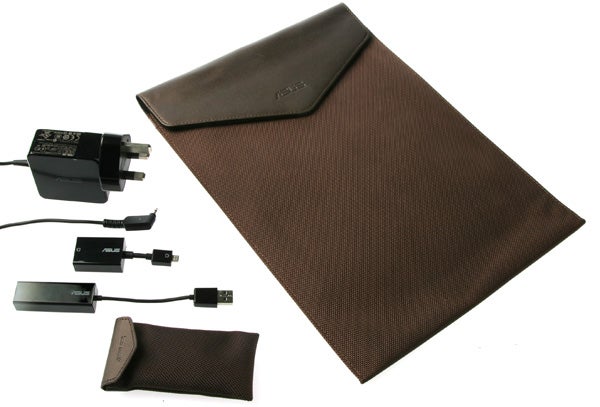 We’ve seen sleeves included with previous laptops such as the Dell Alienware M14x, and without exception they’ve been cheap, floppy affairs. We’d rather have them than not, but would buy something better at the first opportunity. Not so with the Zenbook. It comes with a re-enforced, brown textured nylon and leatherette sleeve, sporting a soft interior and magnetic clasp. We must say Asus has really gone all-out on the extras here, an example we hope other manufacturers will follow for future Ultrabooks. About the only addition anyone could still want is an external optical drive.

Usability is likewise top notch. The isolation/chiclet keyboard’s large silver keys are well placed and spaced, and offer fairly crisp action. Our only complaint is that there’s no backlighting to be found here. Though this is a limitation the UX31 shares with the Acer Aspire S3, again we can only say it dents the premium feel just a little. 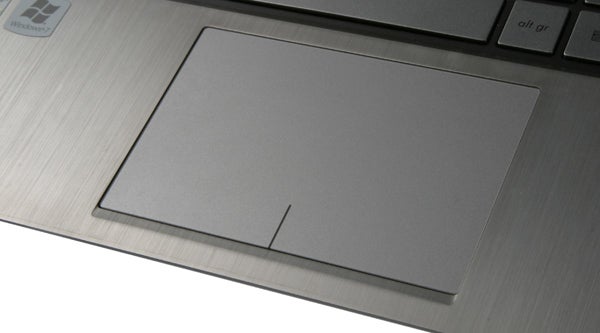 The single-surface, ‘buttonless’ touchpad is as large as anything offered by the 13in Samsung Series 9 or Apple’s similarly sized MacBook Air, beating the smaller effort on the S3. However, there’s an unusual touch in that Asus has delineated its ‘buttons’ with an etched stripe. In practice the touchpad works very well, though we found the right-click zone to be smaller than on most and you may want to adjust the pad’s sensitivity a little.

The one element that most often lets us down on premium laptops is their displays. Unfortunately, even on Ultrabooks most manufacturers (LG being a notable exception) offer sub-par TN panels rather than the IPS we would like to see. It’s a little frustrating that Asus’ Transformer Prime has a far superior screen to the Zenbook despite costing half as much, though naturally the UX31’s other components are more expensive. 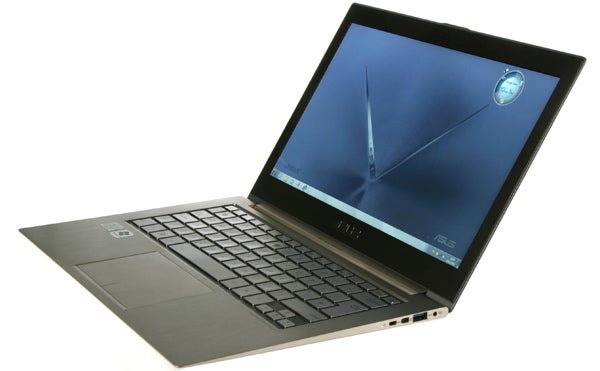 So how does the 13.3in screen on the company’s Ultrabook actually hold up? A major positive is its resolution, which at 1,600 x 900 is higher than the 1,366 x 768 most rivals can offer (even the Air only goes up to 1,440 x 900). Thanks to this, sharpness is also excellent, and despite the reflections it causes, its glossy finish enhances perceived contrast. Combined with the screen’s high brightness, it means colours generally come across as vivid.

Good news continues with even backlighting and no bleed, while dark detailing is decent with all but the darkest two shades on our greyscale plainly visible. However, blacks aren’t particularly deep and what really spoils the party are viewing angles, which are quite poor. Especially on the vertical, you have to be really careful to avoid significant contrast and colour shift. Overall then, the screen impresses as long as you position it ideally. 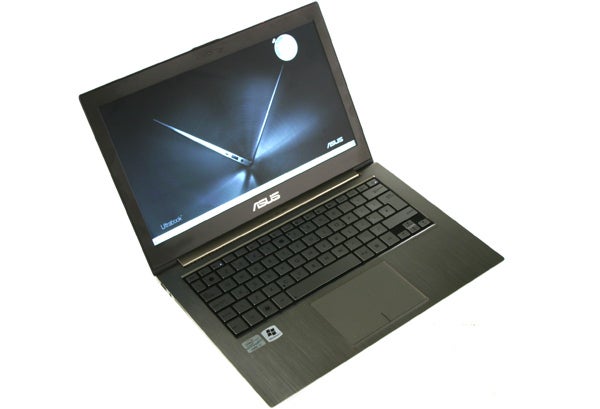 Audio is undeniably good for an ultraportable. The UX31’s speakers, well-positioned between the screen and keyboard, were developed in conjunction with Bang and Olufsen – and it shows (or rather sounds), with a surprising amount of volume, detail and even a hint of bass marking one of the better performances we’ve heard from a laptop this thin. That being said, best of a bad bunch is faint praise and distortion creeps in at anything close to maximum. We would deem them acceptable for light entertainment in a quiet environment, but otherwise you’ll still want an external solution.

Getting to performance, Ultrabooks give a minimum standard which even at its worst will be more than adequate for most. However, the UX31 kicks things up a notch with a dual-core Core i7-2677M CPU, compared to the Core i5 that’s standard on most competitors. This 1.8GHz processor will turbo clock up to 2.9GHz on a single core and offers support for up to four threads. It’s backed by the standard 4GB of RAM, with a 128GB SSD taking care of storage duties.

As with all Ultrabooks (and most ultraportables, barring the Sony VAIO S and a very few others), this 13in Zenbook uses Intel’s integrated HD 3000 series graphics, which is suitable for light gaming. In TrackMania Nations Forever (at 720p and medium detail) it managed a perfectly smooth 41.4fps, but trying the same settings in a more demanding title like Stalker: Call of Pripyat resulted in an unplayable 13.4fps.

Throughout testing, the UX31 remained cool but didn’t stay as unobtrusive on the noise front as the Acer Aspire S3.

Battery life is more important than ever on Ultrabooks, as the integrated batteries are not designed to be user replaceable meaning you can’t take a spare or easily swap it out when it starts to deteriorate. Thankfully the 13in Zenbook holds its own here, with it managing just a few minutes short of six hours in our non-intensive battery test (various productivity scenarios with screen brightness at 40 percent and wireless radios disabled).

That’s better than both the Acer Aspire S3 and MacBook Air 13in, albeit it’s put in the shade by the seven hours Samsung’s Series 9 900X3A brings to the table. Still, it should be enough to get you through a working day with careful use. 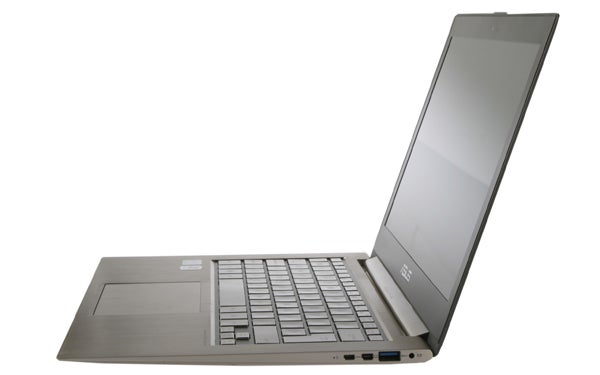 Unfortunately, at the time of writing it’s almost impossible to find stock of the UX31 anywhere in the UK, though its little brother, the 11in UX21, is readily available for around £850. Still, that machine lacks the high screen resolution and SDXC card reader of its larger sibling, as well as packing a Core i5 rather than Core i7. In other words, size considerations aside the 13in Zenbook is the one to go for.

Going by its MSRP of £999, the UX31 is excellent value as Ultrabooks/ultraportables go. The 13in Air with the same adapters but a slower Core i5 CPU, for example, will set you back £1,145. Asus faces stiffer competition from the Windows PC camp though, especially in the form of the S3, since Acer will sell you its Aspire Ultrabook with a 240GB SSD for £1,075. However, again the CPU gets a downgrade, you’re stuck without fast connectivity like USB 3.0, the screen resolution is lower (though viewing angles are better) and the Zenbook just wins out on usability too – without even counting the extras you get. Overall then, we’d say the UX31 wins the toss.

If you do want a superior screen and backlit keyboard, the £1,100 Samsung 900X3A is also worth keeping in mind, while if you’re on a budget the £700 model of the S3 is nigh-on unbeatable, being the cheapest 13in Ultrabook by quite some margin.

Asus’ 13in Zenbook comes very close to being the ultimate Ultrabook. It sports a nice design, solid aluminium build, superb connectivity, high-resolution screen, great keyboard and touchpad, class-leading audio and premium accessories such as the stylish sleeve – and all for under £1,000. Given this, its lack of keyboard backlighting can easily be overlooked. Unfortunately, its screen’s poor viewing angles are trickier to forgive, keeping the UX31 from a Recommended Award by a kitten’s whisker.