What is the Asus ROG Swift PG27AQ?

The Asus ROG Swift PG27AQ is a premium 27in gaming monitor with a 4K pixel resolution, an IPS LCD panel and Nvidia’s G-Sync technology. This combination should add up to sharp-looking, high-quality images that are delivered as smoothly as possible, void of any tearing or stuttering.

However, this isn’t a high-speed gaming monitor, with the LCD panel running at only up to 60Hz. As a result, those after the ultimate competitive edge may want to look elsewhere. For a display that will deliver great image quality and smooth gaming, however, the Asus PG27AQ is a great option.

Asus has done a good job with the overall design of the PG27AQ. It has some of the classic hallmarks of a “gaming” product but manages to incorporate them in a reasonably classy way.

There’s the Asus Gaming logo on the base, an intriguing angular pattern on the stand, and the repeated use of sharp angles to create an edgy look. It’s all finished in a simple matte-black plastic, so it doesn’t look at all garish. 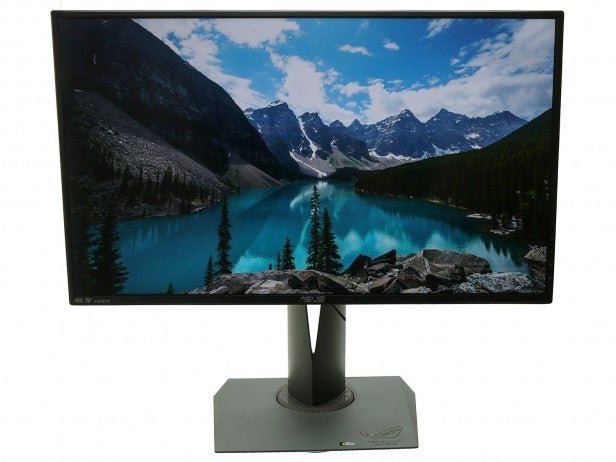 The back in particular has been well thought out, with the sharply sloping sides hiding the step that would otherwise be needed to house all the connectivity and
electronics. A hole in the stand also serves as a simple but effective cable tidy for the inputs and other connections hidden on the underside of the rear.

This display has an impressively slim bezel, measuring only 6mm on the top and sides and 12mm on the bottom. It doesn’t protrude much from the front either, sitting a mere millimetre or so proud.

The overall affect is of a more elegant, lightweight display that’s less imposing than the chunkier 27in alternatives.

The stand offers a full selection of adjustments, with 120mm height range (which is actually slightly lower than some, but still sufficient), swivel, tilt and pivot. Even if you never use the display in portrait mode, the latter helps to make plugging in cables that bit easier. 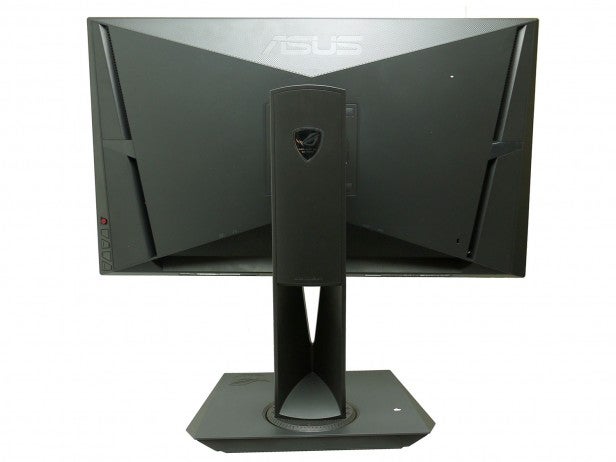 All the movements are smooth, too, requiring only one finger to push and pull it into position.

The second is that the panel is an IPS LCD, and so should offer excellent viewing angles with little colour or contrast shift when viewed off-axis. However, it does mean that the Asus PG27AQ is limited to a 60Hz refresh rate – so although gamer-orientated, it isn’t suitable for high-end gamers looking for the fastest response time. 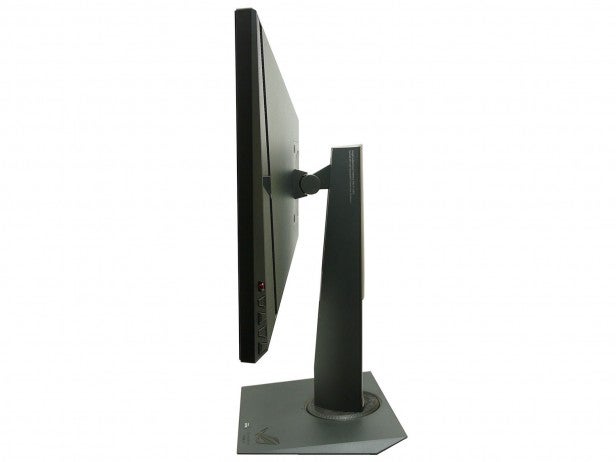 Third, there’s the presence of G-Sync – Nvidia’s frame-rate-syncing technology that ties together the frame rate of your monitor to the output of your graphics card. I’m a big fan of the technology and would consider it (and AMD’s equivalent, FreeSync) an essential addition for gamers who want their games to look their best. It really does eliminate the frame-tearing and stuttering you experience with normal monitors.

Joining this trio is a pair of 2W speakers that can output audio from your HDMI or DisplayPort source. There’s also a headphone jack for private listening.

That’s it for video and audio inputs, though, so those relying on DVI or VGA won’t be able to use this monitor. However, if you’re still relying on those old connections then this monitor probably isn’t for you anyway!

The only other hardware feature is a USB 3.0 hub, with one upstream and two downstream connections. 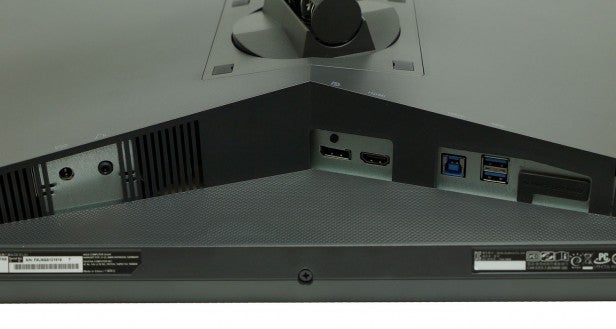 The rest of this monitor’s features reside internally. There’s flicker-free backlighting, a low-blue light mode (for reduced eye strain during late-night gaming/working sessions), a variety of GameVisual modes (different colour, contrast and gamma profiles for different content and gaming types), and a trio of quite peculiar gaming features.

Collectively dubbed GamePlus technology, they consist of a crosshair overlay that makes it easier to pinpoint the centre of the screen, no matter what gun you’re using or game you’re playing. There’s also a timer overlay that’s supposed to be useful for providing an indication of how long there is left in the round – but its minimum setting is 30 minutes, which seems overly long to us. Plus there’s an FPS counter.

I can just about see the crosshair feature being useful in some games where it otherwise hides the crosshair – no-scoping with a sniper rifle in Counter-Strike, for instance – but not enough to rely on. The others just seem utterly superfluous.

Nonetheless, overall this is a display that certainly seems like it has plenty going for it, but the proof of the pudding is of course in the image quality.