What is the Asus ROG Swift PG279Q?

The Asus ROG Swift PG279Q is, on paper, the ideal 27-inch gaming monitor. It has an IPS panel, so overall image quality should be superb, plus it can refresh at up to 165Hz and includes G-Sync technology too. Unless you’re after a super-high-resolution 4K display, there simply isn’t anything more that could be packed into this screen.

However, the Acer Predator XB271HU boasts near-identical specs, so which is the better monitor? Moreover, does either panel really justify its near-£700 asking price?

The PG279Q makes quite a first impression. It’s immediately obvious that this monitor is aimed at gamers, thanks to its aggressive, angular styling and the presence of a light-up base. A ring of light surrounds the base of the stand and to the front/right of the base is an illuminated Asus Republic of Gamers logo.

Surprisingly, it just about manages to avoid appearing garish and instead is reasonably classy-looking, despite these additions. The use of matte-black plastic throughout means the rest of the display has a reasonably understated quality to it, plus the use of an impressively slim and low-profile bezel keeps the display looking sleek and modern.

In contrast, the Acer XB271HU has a far less discrete base and a less coherent design to the rest of the monitor – although its screen bezel is even slimmer. 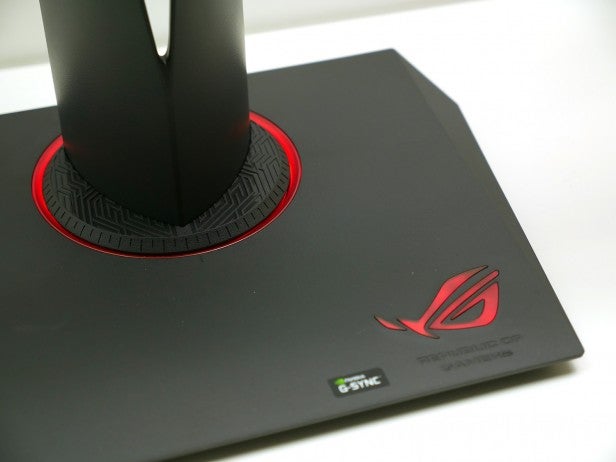 The PG279Q’s build quality is excellent too. All the plastic panels feel reasonably solid and the movements of the stand are smooth and effortless, with no hint of wobble or give.

You get a full complement of movements as well. Height can be adjusted from 42cm to 55cm, the display can pivot right round into a portrait orientation, it can swivel from left to right, and tilt up and down too.

If you’d like to do away with the stand altogether then it can be removed, although this isn’t a tool-less operation as it is with some monitors. Undo the four screws that hold the panel on and you can attach any 100x100mm VESA-compliant stand/monitor arm.

One thing this monitor can’t claim is an impressive range of connectivity. Its uses Nvidia’s G-Sync processor, and so is limited to just one DisplayPort and one HDMI. This means you’ll have to invest in an HDMI switcher if you want to use this display for a multitude of games consoles and other AV devices.

All other G-Sync displays – the XB271HU included – present the same limitation, but plenty of other gaming displays are better equipped, with AMD’s rival FreeSync feature not being restricted in the same way. 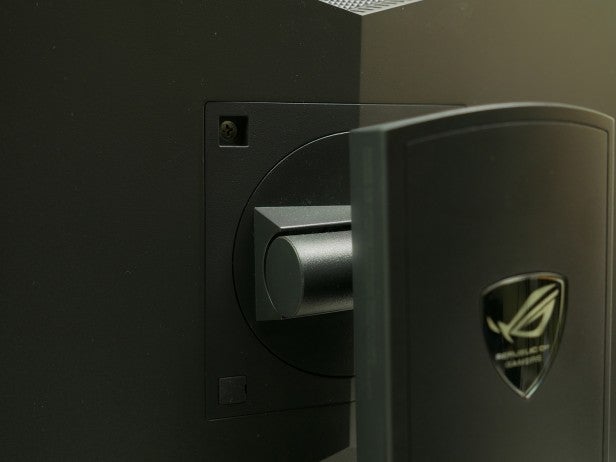 You do get a USB 3.0 hub, though, so you can hook up your peripherals or USB memory sticks to the display. Actually accessing the ports is rather a pain, as they’re tucked into a V-shaped wedge right in the centre of the rear of the display – but at least they’re there. You get one input and two outputs.

Another slight inconvenience with this display is the use of an external power supply, which means you have to find somewhere to put the power brick, as well as tidy away all the cables.

The display has a resolution 2,560 x 1,440, which makes for 110ppi – what I consider to be the ideal level for a PC monitor. Any lower and the display will look obviously pixellated, while any higher and content on-screen will look too small, eventually leading to you having to engage Windows’ scaling options.

Those pixels are packed into what’s actually an “IPS-type” panel. This means it’s a copy of IPS, which is an LG trademark, made by another manufacturer – in this case, AU Optronics. Technically, it’s known as AHVA, or Advanced Hyper-Viewing Angle.

The overall result should be the same, however, which is that you benefit from the better viewing angles of IPS, as well as its tendency for better colour accuracy over TN panels. 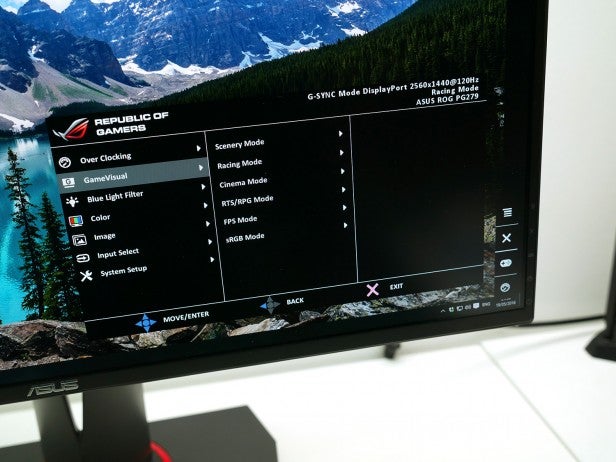 So with no need to tweak Windows scaling, setup is pretty straightforward. In fact, image quality is pretty decent out of the box. Even if you do find yourself having to make a few adjustments, it shouldn’t cause an issue since the OSD and control system are fantastic.

Asus uses a little joystick mounted on the rear of the display to control the OSD, and it makes moving round menus quick and intuitive. The menu layout is also pretty easy to get to grips with, even if there are a few too many esoteric gaming options.

With this display arriving fully assembled, the Asus ROG Swift PG279Q has to be one of the easiest to get up and running.