nVidia’s MCP73 chipset has been a long time coming. We first heard about this single-chip piece of core logic in February and now, finally, we’ve got an MSI P6NGM-FD that uses the new silicon in our hands.


There are four variants of MCP73 that combine a GeForce Northbridge and nForce Southbridge in a single chip. All four models have the key feature of the chipset, which is a GeForce 7000 series graphics core but the other features vary from model to model. In the case of the MSI it’s an MCP73PV chipset, which is ranked in second place in the MCP73 league table.


The graphic core runs at 600MHz and supports dual monitors and in the case of the MSI you get DVI and VGA outputs stacked one above the other. The DVI port supports HDCP so you can use the P6NGM-FD to watch High Def movies however MSI hasn’t gone the whole hog by including an HDMI connector even though the chipset does support this feature. 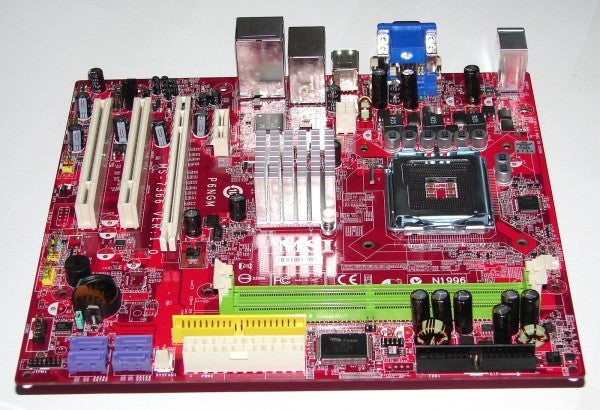 We successfully ran a CRT monitor and TFT display on the two monitor outputs and nVidia’s drivers had no problems running a dual screen desktop.


This variant of the MCP73PV delivers the sort of features that you would expect to see including support for a 1,333MHz FSB, a PCIe x16 graphics slot, four SATA2 connectors with RAID and a Parallel ATA connector, which will support two ATA133 devices. The Ethernet connection is Realtek Gigabit and the Realtek audio has six mini jacks to deliver surround sound.


There are a couple of surprises in store and both relate to memory. The first is system memory support, which is capped at DDR2-800 which doesn’t sound too terrible. However, this is single channel memory in two modules rather than dual channel as you might expect. The second point is that the video memory is shared system memory, which is standard practice, but the amount is fixed at 64MB. This may well be a sensible move on the parts of nVidia and MSI because the GeForce 7100 isn’t intended to be a gaming hotshot. But honestly, when did you last see a graphics card that only has 64MB of relatively slow memory. You have been warned!

The layout of the MSI is a workmanlike affair but we would expect nothing less from a major motherboard manufacturer when there are relatively few components to accommodate. There’s a single PCIe x1 slot above the graphics slot and two PCI slots below so if you install a graphics card you’ll still have some expansion capability. The main power, IDE, floppy and SATA connectors are located at the edge of the board, while the four-pin ATX 12v connector sits behind the I/O panel. The passive cooler on the chipset is on the small end of the scale yet it kept the chipset cool without any trouble.


The GeForce 7100 graphics core supports DirectX 9.0c and Shader Model 3.0, but the same was true of the previous GeForce 6100 and 6150 chips, which supported AMD Athlon 64 processors. The 7100 core has more grunt than the 6100 but it only has two Pixel Shaders and one Vertex Shader so the main interest lies in its monitor support and on that score the MSI doesn’t compare well to a typical AMD 690G motherboard, such as the Gigabyte GA-MA69G-S3H that we’re using for comparison. 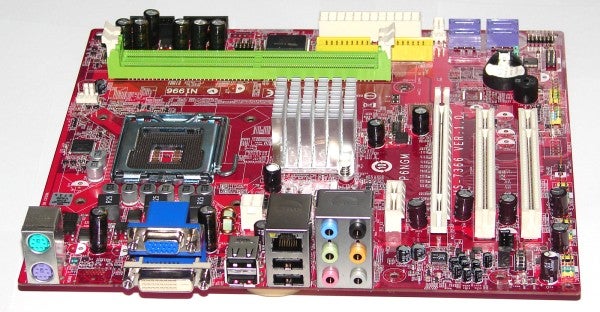 It’s a fair fight as the Gigabyte sells for £48, which is only slightly more expensive than the MSI, but of course the AMD690 ties you to an Athlon 64 X2 processor so the upgrade path is non-existent. If you build a new PC on the MSI P6NGM-FD with a Core 2 Duo are you likely to upgrade the hardware at any point especially when you’re hobbled by a single channel memory controller? We suspect you would treat the PC as a sealed unit so let’s see how the two systems compare.

We ran 3DMark06 just for fun and found that the lack of Shader Model 3.0 support in the 690G means that you cannot directly compare the graphics capability of the two chipsets. Both are competent enough to play games such as Sims or Lego Star Wars but that’s about your lot.


System performance was very similar when we ran both motherboards on the IGP but the MSI pulled ahead slightly when we plugged in an Asus GeForce 8800 GTS graphics card.

We were surprised to see that there was little to separate the two systems in terms of performance so the deciding factor would be a need for a particular feature such as HDMI or a yen for a particular make of processor. 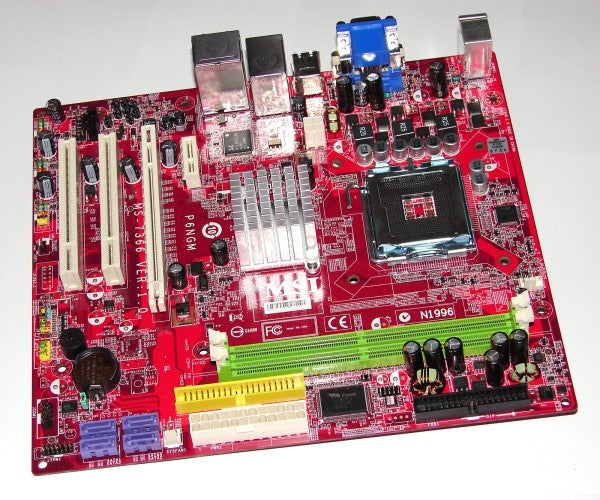 As a final piece of fun we tried to overclock the MSI using the basic set of tools in the BIOS. Our Core 2 Duo E6750 will happily run on a front-side bus of 1,800MHz or more but the MSI wasn’t having any of that. The MSI would run at 1,450MHz but higher speeds caused the board to lock solid, which then required us to reset the CMOS jumper. The moral of this tale is to leave well alone and run at standard speeds.


So why, you may wonder, has nVidia decided to release this relatively dull chipset? Good question. Intel’s Core 2 Duo is selling by the truckload and the only companies supplying chipsets are Intel and nVidia now that AMD has taken ATI out of the picture.

The vast majority of budget PCs use an IGP to save on costs and nVidia clearly has the lead on Intel when it comes to graphics but Intel is on the verge of a graphics update with its G35 chipset. It looks like nVidia has beaten Intel to the punch by a small margin with a competent chipset that delivers decent graphics at a low cost but it’s a shame that MSI didn’t include an HDMI connector.


Fans of Core 2 Duo can use the MSI P6NGM-FD to build a small, cheap and quiet PC that delivers surprisingly good performance but anyone building a Media Centre would be better off with AMD’s 690G.