The AMD 785G chipset that lies at the heart of the Asus M4A785TD-V EVO is an update to the AMD 780G that launched early in 2008. 780G was, to use an awful expression, a game changer. The HD 3200 graphics in 780G were head and shoulders above the competition in the integrated graphics market as they used 40 Unified Shaders with DirectX 10 and a superb HD movie decoder called UVD 1.0 along with proper digital video outputs. It really was an ideal platform for a media centre PC or as a simple low cost home PC that could compete on price and performance with the all conquering Intel Core 2 platofrom. 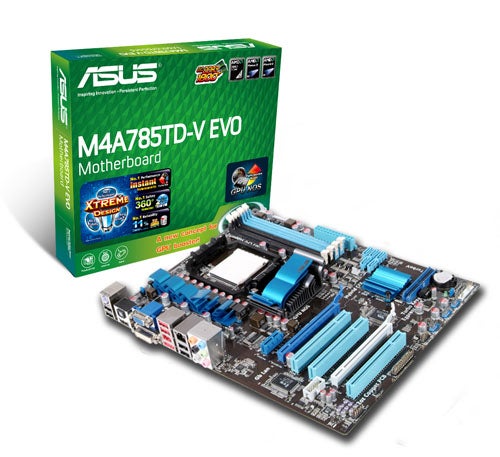 The HD 3200 graphics core was updated when AMD came up with the 790GX chipset however the only difference between HD 3200 and HD 3300 is an increase in clock speed from 500MHz to 700MHz. We have reviewed a number of 790GX motherboards such as the MSI 790GX-G65, which we loved to bits but the increase in graphics speed was pretty much the least interesting aspect of the motherboard. 790GX supports Socket AM3 Phenom II processors with DDR3 memory and is allied with a later Southbridge than the SB700 you’ll find in 780G. The AMD SB710 Southbridge supports all the usual features such as SATA II, Gigabit Ethernet and HD Audio but it also packs in ACC (Advanced Clock Calibration) which greatly assists overclocking and which also allows you to unlock the extra core in Phenom II X3 processors. Further to this, the SB750 Southbridge enhances the SATA II RAID 0, 1 and 10 options in SB710 and adds RAID 5.


By contrast the 785G is a relatively minor update of 780G. The graphics core has been renamed as HD 4200 but it looks very similar to HD 3200 as it still has 40 Unified Shaders and is built on a 55nm process. DirectX support has been raised from 10.0 to 10.1 and HDMI support from 1.2 to 1.3. The movie decoder has been upgraded from UVD 1.0 to UVD 2.0 which appears to be a matter of adding a second decoder to handle multiple video streams. Realistically that will help picture-in-picture but it is hard to see that this will make a massive difference to many AMD customers. AMD tells us that 780G uses 205 million transistors while 785G uses ‘slightly more than 205 million transistors’ so it is clear that the changes are not great. 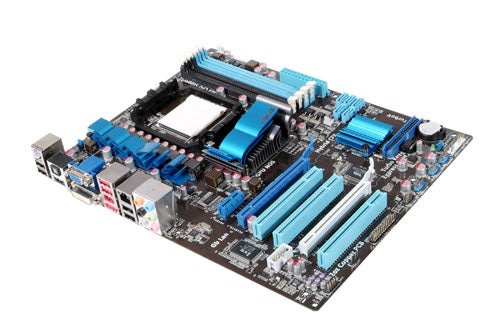 The real mystery to us is that AMD bothered to update 780G when it could have been happily left to support legacy AM2/AM2+ CPUs while the obvious candidate for the update is 790GX. 795GX sounds like a suitably snappy name to us and we predict this will come complete with a 700MHz core speed.


So here we are with the Asus M4A785TD-V EVO and we’re faced with a world of confusion. For starters there are the dual graphics PCI Express slots except they’re not, not really. 780G/785G supports 22 lanes of PCI Express for expansion cards with 16 lanes reserved for the graphics slot so the second long PCI Express slot you see in the pictures only gets four lanes. Quite simply, there is no prospect of CrossFireX on offer with 785G.

Then there’s the size of the M4A785TD-V EVO. No doubt Asus will come up with endless variants of 785G motherboard in the future but for the time being it’s a big board that won’t be much use for most media centre PCs where you want a Micro-ATX motherboard instead. 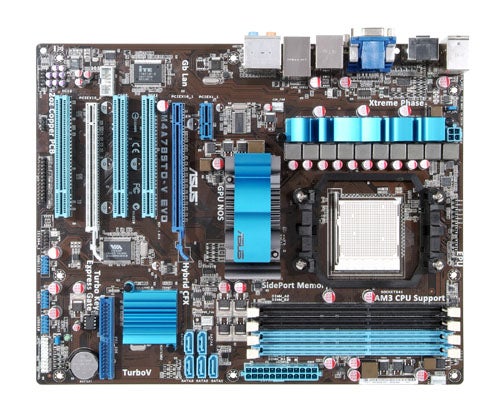 Asus has chosen to use an AM3 processor socket along with DDR3 memory slots which reduces your options when you’re choosing a CPU. Make no mistake about it, we like the combination of AM3 and DDR3 but this choice means that the M4A785TD-V EVO is aimed at the new build/extensive upgrade market where you are buying a package that consists of a motherboard, CPU and memory. On the bright side AMD kit is so cheap that you can source the necessary hardware for £200.


The layout of the Asus is generally neat and tidy but we would expect nothing less as the designers have got plenty of space to work with and relatively few components to accommodate. The 8+2 power hardware runs down one side of the CPU socket and the four DDR3 slots down the other. For some reason the CPU fan header is located outboard of the memory slots which might make it something of a stretch. There are two more headers on the board for a chassis fan and the power supply fan.


The passive coolers on the power regulation hardware, Northbridge and Southbridge look superb. They are swoopy blue aluminium items that look the part and, more importantly, they do a good job. The blue colour scheme extends to the three PCI slots and the ATA133 connector and we note with interest that there is no floppy connector. Asus has found the space for three PCI slots as well as COM1 and LPT headers but you don’t get a floppy. This strikes us as another curious decision; we don’t mind legacy free motherboards that ditch all the antique hardware to tidy up the layout and the BIOS but honestly, is there anyone out there who wants an LPT1 connector but does not want a floppy drive?

We tested the M4A785TD-V EVO with our usual Phenom II X4 810 and 2GB of fast Kingston DDR3 and found the performance was directly comparable to the 790GX motherboards we have seen in recent times. We overclocked the integrated HD 4200 graphics core to 700MHz without any trouble which reinforces our belief that AMD 795GX will arrive sooner rather than later.


We couldn’t do a back-to-back comparison with 780G as the boards for which we have test results all support Socket AM2+ and we don’t currently have one hanging around our test bench.


The bigger question is how 785G compares to 790GX and the answer is that the two are very similar indeed. After one thousand words of confusion the clouds have lifted and we see that this AM3 motherboard offers all the benefits of 790GX at a bargain price.

Fair play to Asus as that’s superb news for the customer but we still have no idea what AMD is playing at as it appears to be cannibalising the 790GX market with the updated 785G.


Provided you don’t want CrossFireX you’ll find that the M4A785TD-V EVO does a very good job at a low price but the sooner Asus comes out with a Micro-ATX version the better.