The MSI 790GX-G65 is the first motherboard we’ve seen that shows the result of a rethink by the marketing people at MSI. For starters the company logo is now msi rather than MSI, although we’ll stick with the capital letters if it’s all the same to you. Then there’s the model code, 790GX-G65, which is both concise and informative. The chipset is the AMD 790GX that fully supports Phenom II as we have previously seen in the Asus M4A78T-E. 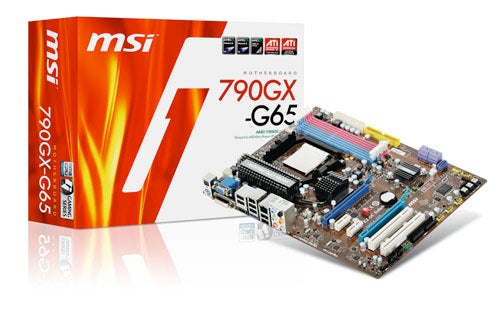 There is no suffix to the 790GX part of the model code so this is a regular ATX model. If the code was a 790GXM-G65 it would denote a Micro-ATX board and an I would indicate a Mini-ITX form factor.


The G65 part of the model code breaks down thus: The G shows it is part of the Gaming series of motherboards (the others are eXtreme, Entertainment, Professional and Classic). The 6 refers to market segmentation which replaces the old Diamond and Platinum names. 9 is the equivalent of Diamond, 7 or 8 is a Platinum, 4-6 for Gold or Neo and 1-3 for Value. The final digit refers to the options on the board although we’re none too sure about this as the 5 suggests you get some extras yet the 790GX-G65 comes with the bare minimum in the package. There’s a single SATA cable, a SATA power adapter, an IDE cable and a CrossFireX connector. Let’s hope it all becomes clearer when we’ve seen a few more ”new” MSI motherboards over the coming months.


So what we have here is an ATX 790GX Gaming motherboard that is positioned in the mid-range. MSI has clearly worked on the appearance of the board as it looks – dare we say it – quite stylish. The PCB uses two shades of brown and looks like an enormous chocolate dessert. Yummy.


This move away from MSI’s usual love affair with the red PCB has really helped to tone down the impact of the colours used on the other components. The four DDR3 memory slots are still coloured blue and pink and the two PCI Express 2.0 graphics slots continue to use different shades of blue yet it all looks quite pleasant where some MSI motherboards have looked as though they have been coloured by a toddler at playgroup. 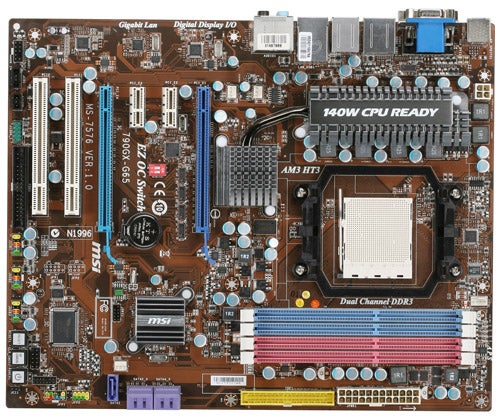 This cosmetic restraint extends to the heatsinks which are the colour of steel although we are told the cooling system uses ‘Flat Fins Copper-Pipe’. These coolers look as though they have been lifted from a Gigabyte motherboard, which is meant as a compliment as we love the looks of the current crop of Gigabyte products. The Southbridge cooler on the MSI is tiny, which is fine as the Southbridge of an AMD chipset does very little work. The Northbridge cooler is larger and is linked by heatpipe to a hefty cooler on the power regulation hardware. Unfortunately all three coolers are secured with plastic pop pins in contrast with high end models that retain the coolers with screws.

The layout of the board is very good, which is exactly what we expect from MSI. We’ve mentioned that the chipset coolers look good but perhaps more important is that they’re low profile so are don’t interfere with anything else. Across the foot of the board are headers for a second Firewire port and up to six more USB ports although there are no brackets in the package. In the corner are three illuminated micro buttons for Power, Reset and Clear CMOS. 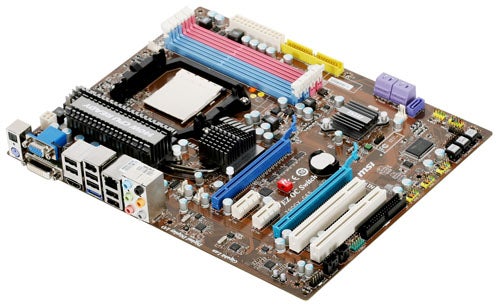 The lower half of the board is dominated by the pair of PCI Express slots that can be used in conjunction with the integrated HD 3300 graphics in Hybrid CrossFire. MSI has included a 128MB memory chip that supports the integrated graphics which is a feature that AMD calls SidePort. No doubt this is the reason why the MSI is able to run 3DMark Vantage on integrated graphics where the Asus M4A78T-E and a Biostar that we have recently used both consistently crashed during the benchmark. Although the MSI can complete 3DMark Vantage we’re none too sure how useful the score of 407 marks will prove for gamers. That’s a touch cruel of us as the 790GX is very good as far as integrated graphics go and the ATi is utterly capable when it comes to running the Windows Vista desktop and decoding HD movies.


MSI points out that the ALC889 chip supports stereo 24-bit/192KHz or 5.1 24-bit/96KHz audio and is therefore able to properly support Blu-ray movie playback. The graphics outputs consist of HDMI, DVI and VGA so you can watch movies on an HD telly with consummate ease, should you so choose.


Our first step in testing the 790GX-G65 was to use the M-Flash in the BIOS to run an update from a USB key. The process was as quick and easy as it is to update an Asus or Gigabyte and that’s the highest praise that we can offer.

The BIOS contains all of the usual features with the addition of an extra tweak. When you’re overclocking there is a process of trial and error to find out which base clock or front side bus setting will work with your processor on the voltage settings that you have chosen. MSI has introduced a feature in the BIOS called Auto OverClock that is disabled by default. Once it is enabled and the changes have been saved the system restarts in the usual way. Enter the BIOS set-up again and you will find that the BIOS has magically set the maximum clock speed. That’s the theory and the 790GX-G65 reckoned that our Phenom II X4 810 which usually runs at 13 x 200MHz = 2.6GHz would be capable of 9 x 349MHz = 3.14GHz. This is very similar to the speed we achieved manually, which was 13 x 240MHz = 3.12GHz, so we reckon that Auto OverClock has the potential to save a fair amount of time and hassle.


We should point out that we were able to overclock further with the Asus M4A78T-E but we doubt that anyone considering a motherboard with integrated graphics will be desperately worried about squeezing every last Megahertz from their hardware.


MSI has given its motherboards a makeover and the 790GX-G65 shows this new direction has great promise. It’s a neat 790GX motherboard and the BIOS has been developed in an intelligent manner that adds some useful features.