The AK70 is Astell & Kern’s latest portable Hi-Res Audio player. It sits just above the company’s entry-level AK Jr, although entry to A&K’s post-iPod audiophile world costs just shy of £400, and the AK70 is priced at a not-inconsiderable £500.

For that extra cash, you get an Android-powered media player with 64GB of music storage, as well as Bluetooth aptX, Wi-Fi and a DAC based on the Cirrus Logic CS4398 chip. Since launch, Astell & Kern has also added streaming support for Tidal and Moov to make this an even tidier package. 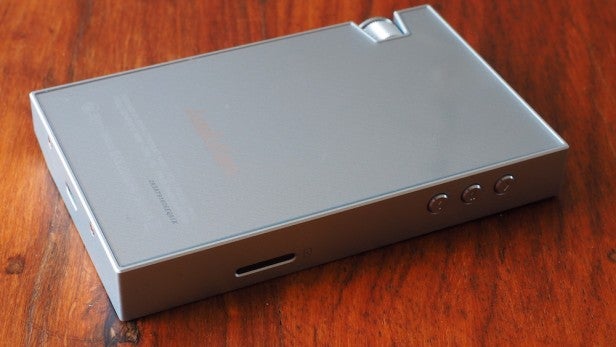 As with all Astell & Kern media players, the AK70 is super-angular. The sharp corners of previous models have turned out to be proper pocket-shredders, but the squatter proportions of the AK70 mean it’s less likely to poke holes where it shouldn’t.

Not that the AK70 is tiny, exactly – it’s still more iPod Mini than iPod Nano (if anyone remembers what that means). It doesn’t weigh as much as it looks like it should, but that’s no bad thing for a portable. I didn’t find it uncomfortable to carry around at any point, and never noticed it digging into my hand when I was controlling it. 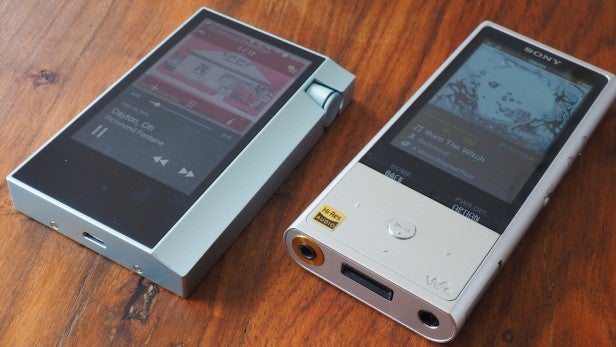 Alongside possibly its main rival, the Sony NW-ZX100 (right), the AK70 is squatter and lighter

The only colour available from launch was Misty Mint, which is a very pale metallic blue that’s not exactly offensive, but it’s since been joined by a less love-or-hate black version that looks pretty swish. No doubt A&K will introduce other hues if the AK70 continues to sell well. 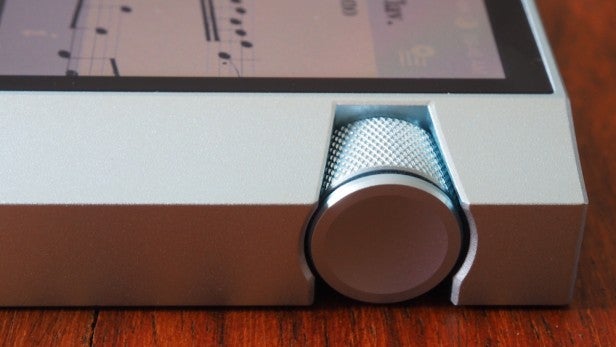 On the right side of the AK70’s body is a large knurled knob that controls volume. It has more play in it than I expected, and turns with a bit of a loose, lazy click, but I warmed to it. I had fears that it’d get turned accidentally in my pocket as I walked, but that never happened, and the ease with which it rotated meant that I could change volume quickly with my thumb alone.

The top of the AK70 plays host to the power switch, a 3.5mm headphone socket that can be configured as a line out, and a 2.5mm balanced output for use with compatible headphones, such as A&K’s AK T5p and T8iE models. Balanced headphones are simply wired up differently to traditional unbalanced models – any headphones can be modified for balanced output, but the improvements in sound will differ from model to model. 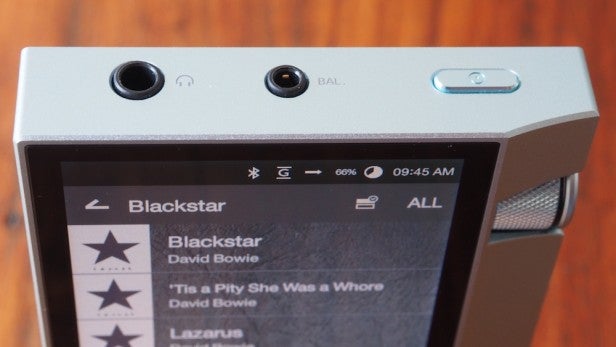 Down the left side are three small, round buttons for skip forward, skip back and play/pause. There’s also a microSD slot that enables you to add up to a further 128GB to the 64GB of built-in storage. That should be just about enough for most people, even with the larger file sizes needed for Hi-Res Audio.

The bottom of the AK70 is where you’ll find the Micro USB socket for charging and data transfer, as well as for hooking up an external DAC headphone amp such as the Chord Mojo, if you fancy. You can even connect the AK70 to a PC or Mac and feed your computer’s digital music through it, making use of its superior DAC and amp for deskbound headphone listening.

Although the AK70’s touchscreen isn’t much bigger than the one on the AK Jr – it’s 3.3-inch to the Jr’s 3.1-incher – the resolution has been quadrupled to 480 x 800 pixels. It’s very similar to the screens used on many of the AK70’s more expensive siblings, albeit using TFT LCD tech rather than the AMOLED displays of those higher-end models. 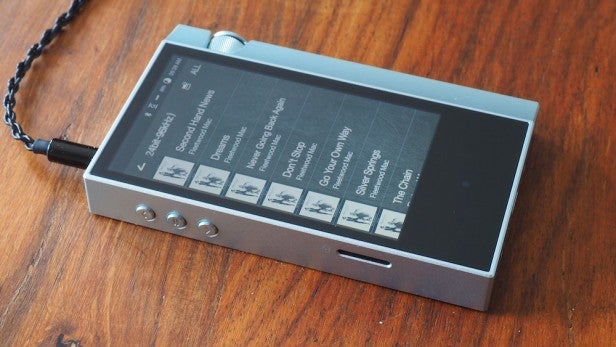 The clean-looking UI is a heavily customised version of Google’s Android OS, with very limited options on the homescreen – all related, as you’d expect, to navigating your available music. There’s the ability to browse by artist, album, genre, playlist or file folders. The other main option is Store, which takes you to a list of supported music services.

Anyone familiar with Android will also know to swipe down from the top of the screen for settings. This is where you can switch on Wi-Fi, Bluetooth, access the equaliser, change the display’s brightness, enable firmware updates, toggle the headphone socket to a line output, and much more.

Also packed inside is a 2,200mAh battery, which is a big upgrade on the 1,450mAh cell in the AK Jr – although the AK70 has a higher-res screen and wireless tech to power, so the larger battery makes perfect sense. The AK70 also automatically powers off after a short idle period, which helps to keep it ticking over for longer.

The AK70 is compatible with Astell & Kern’s AK CD-Ripper, which does pretty much what the name suggests. Plugged into the AK70’s Micro USB port, the CD-Ripper rips CDs and saves the files to the AK70. At £299 it’s a pricey accessory, but if you primarily use a laptop with no optical drive, it could be a tempting convenience. 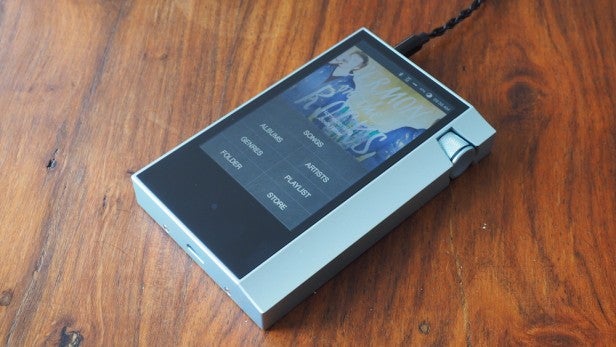 I fed the AK70 with audio files from my Mac, which was simple enough, but not quite the plug-and-play experience you get when plugging it into a PC. Instead of the AK70 appearing automatically as a storage device, I had to install the Android File Transfer software (which, ironically, I’d uninstalled just a few days before). From there, though, it was just a case of dragging and dropping files into the AK70’s music folder.

If you’re making the step up to the Astell & Kern from an iPod and iTunes, the AK70’s rudimentary drag-and-drop music management might come as a bit of a shock. It’s not the friendliest if you like to chop and change just a track or two from each artist, but it’s quick and easy for loading up whole albums.

The AK70 itself is incredibly pleasant to use. That optimised Android OS is really slick and intuitive, and the touchscreen is perfectly responsive – which is more than could be said for the AK Jr’s. Despite the touchscreen being an LCD rather than one of the AMOLED displays used on more pricey A&Ks, I didn’t have too much trouble viewing it in strong sunlight with the brightness setting at just over halfway.

The best news – and probably of most importance to anyone committing to Hi-Res – is that the AK70 sounds simply superb. I mostly paired it with exotic Noble Audio Kaiser 10 custom-fitted earphones, and not once did I feel that an external DAC/amp would offer much improvement.

The mid-range is wonderfully natural, with oodles of detail and plenty of drive. Treble precision and stereo imaging is fabulous – listening to a 24-bit/96kHz recording of Fleetwood Mac’s Rumours, I physically turned to my right when ‘You Make Loving Fun’ started, those fizzing hi-hats seeming almost to come from over my shoulder.

Bass is full but tight, not overblown like that of the Sony NW-ZX100. The bottom end on Josh Ritter’s ‘Getting Ready to Get Down’ carried me along on its wave, rather than sloshing uncontrollably around my feet like I found with the Sony player.

Battery life is an improvement on the AK Jr’s – one hour of playback with the Wi-Fi and Bluetooth turned off dropped it by around 7-8%, and I managed to get around 13 hours in total. Streaming over Bluetooth aptX depleted it much faster, as you’d expect. It’s still not outstanding in this department, with Sony’s Hi-Res Audio Walkman models offering over double the playback time off a single charge, but it’ll get you through all but the longest of long-haul journeys.

Also, the inclusion of Wi-Fi on the AK70 should be a great thing, but it’s a little hamstrung by the fact that A&K doesn’t allow its customised Android OS to access the Google Play Store.

At launch, the only pre-installed app was Groovers+, a music service offering Hi-Res Audio downloads, but not the greatest selection of artists. Sadly, Groovers+ is available to the Korean market only, so I couldn’t register, never mind download some tunes. Seems a bit pointless having the app take up storage space on any AK70s sold outside Asia, really.

Thankfully the Wi-Fi means you get OTA firmware updates, and thanks to a recent one, the AK70 now also supports the Tidal and Moov streaming services. They may not offer Hi-Res Audio yet, but sometimes you just want access to a massive music library. Well done, Astell & Kern, for an update that’s added another dimension to this wonderful little player.

It’s not just a great music player; the AK70 is a lovely thing, a pleasure to hold and use.

There are cheaper ways into Hi-Res Audio, but the AK70 is a better buy than Astell & Kern’s entry-level AK Jr, offering a slicker experience and longer battery life. The Sony NW-A10 starts at just £170 and has gargantuan battery life, but comes with just 16GB of built-in storage, a tiny 2.2-inch screen and just doesn’t sound as good.

The £500 Sony NW-ZX100 perhaps offers the stiffest competition on paper, but again the AK70 sonically blows it out of the water and has a far slicker UI. The real competition comes from the Onkyo DP-X1, which is £100 more expensive, but sounds just a tiny bit more controlled in its treble, has better battery life and offers open access to the Google Play app store.