What is the Astell & Kern AK Jr?

The Astell & Kern AK Jr is the high-end audio company’s slimmest, most affordable portable music player, capable of handling Hi-Res Audio. Well, I say ‘affordable’, but that’s only when you compare it to the rest of the A&K range, with the most expensive model costing upwards of £2,000.

If you’re sold on the benefits of Hi-Res Audio, though, there more to like about the Jr than just its sleek exterior. 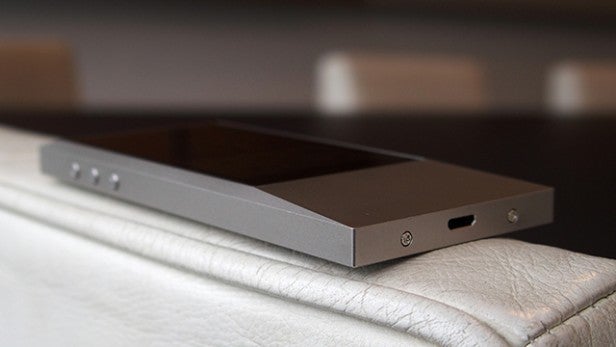 Hands down, the Jr is the best-looking Hi-Res Audio player we’ve used. There’s none of the Pono player’s excessive rubber in sight, and it’s significantly slimmer than Sony’s ZX2. This is a beautifully crafted piece of hardware and gives the iPod Touch a run for its money.

With a stature roughly about the same size as an iPhone 5S, the Jr is made predominantly from a cool anodised aluminium. It’s all straight lines with no curves and has a machined industrial look that’ll make you want to show it off. Measuring in a just 5.9mm thick and weighing in at 93g, it’s slim and only slightly heavier than the sixth-generation iPod Touch. With such an angular design, however, it does have some handling issues. The corners can feel a little sharp to hold, pinching into the palm of your hand, so browsing through music folders for long periods can be an uncomfortable task.

Around the back the Jr’s good looks continue, with a thin layer of glass covering the subtle patterned finish. The stand-out feature here, though, is the rotary volume dial. Tucked away on the right-hand side of the body, it has a satisfying click when you crank the volume up or down.

Elsewhere, buttons and ports are spread around the edges of the device, making them easy to reach with one hand. On the left edge are the metal play/pause and volume buttons. Up top is the standby button, along with a 3.5mm headphone jack which offers 1.9V VRMS power output – up from the 1.5VRMS on the Astell & Kern AK100. That should mean less distortion when using high-end headphones, which are often harder to drive. The Micro USB charging port sits below, flanked by two screws. 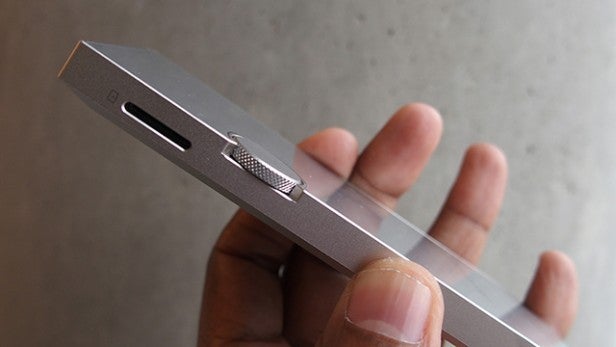 There’s a 1,450mAh battery nestled beneath that alumnium body, which doesn’t sound too impressive, but which Astell & Kern claims should deliver around nine hours of play time. That’s pretty much what we found from using it on a daily basis, so it’s not quite the killer battery performance you can get from an iPod. It will get you comfortably through a day or maybe two at a stretch, and the AK Jr turns itself off when it’s inactive to help preserve the power. Clearly the ability to go longer has come at the expense of the slim design.

Just above the rotary dial you’ll also spot a microSD card slot, letting you boost the 64GB internal memory up to a potential 128GB in total. Some cheaper Hi-Res Audio players such as Sony’s A15 offer more onboard storage, but that’s still plenty of room to store music and accommodate the larger files sizes associated with Hi-Res Audio.

Like other A&K portables, there’s a touchscreen to break up the aluminium body and it’s a sizeable one on the Jr, occupying almost three quarters of the front of the player. It’s a 3.1-inch LCD touchscreen with a surprisingly slim black bezel, but a meagre 240 x 400 resolution. Put it next to most smartphone screens in that price range and it pales in comparison for sharpness and vibrancy. But when your only concern here really is reading track information and seeing album covers, it’s more than acceptable.

What’s more of an issue is the screen’s responsiveness. It can require an additional tap every now and then to open folders or to select items. While it doesn’t make the experience of using it unbearable, it’s a little irritating, and you’d rightly hope for better at this price. 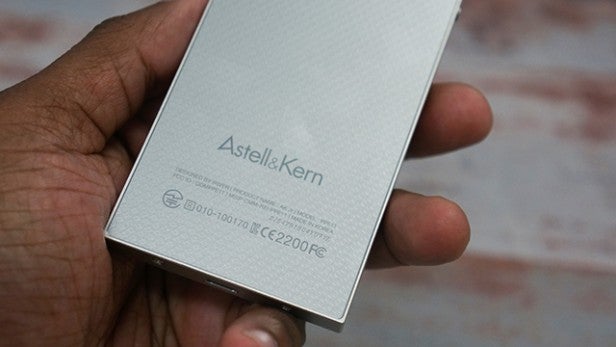 So what about the all-important audio tech? Hi-Res Audio is the big selling point here. The good news is that the Jr supports multiple formats, including FLAC, WAV and AAC. It also supports the DSD audio format created by Philips and Sony.

To play those files you need a high-spec digital-to-analogue converter (DAC) – the Jr uses a single Wolfson WM8740 DAC. As an added bonus, the AK Jr’s DAC can be used by your desktop PC or Mac, so you can improve the headphone experience when using your computer. There’s not a great deal of configuration needed to use it either – once you plug the AK Jr into a USB port, there’s the option to use the DAC mode and, as long it’s selected as the audio output in your computer’s sound settings, you’re good to go. 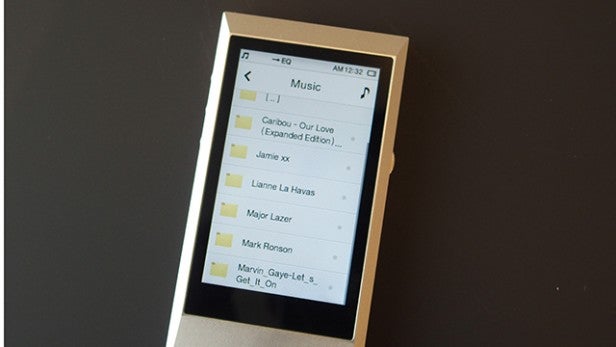 The AK Jr’s software is built on Android – although you wouldn’t know it, because it’s such a basic take on Google’s operating system and you can’t download Android apps. There’s no Wi-Fi connectivity on board either, which is a feature you can get on more expensive models in the range.

You do have Bluetooth 4.0 support to connect a pair of wireless headphones or a portable speaker. The lack of Wi-Fi and a more fully fledged version of Android is disappointing, though, as it would have been great to tap into an audio streaming service like Qobuz, Tidal or Deezer Elite to broaden the music catalogue.

The user interface, as I’ve said, is pretty simple. Up top is the Now Playing section, letting you jump right into the last track played. Alongside that is a hexagonal icon in the top right, which launches settings – from here you can adjust the display’s brightness, turn off the backlight and activate Bluetooth to pair with wireless headphones. You can also set up the headphones socket as a line out and perform an Auto Library scan.

The main home screen is broken up into six sections where you can view Songs, Artists, Albums, Genres, Playlists and Folders. Once you’re into those sub-sections, you can press the small dot beside a track to add to a queue of tracks, create a new playlist or delete it altogether. Creating playlists is a little fiddly and requires a few clicks to add single tracks, but it does the job. 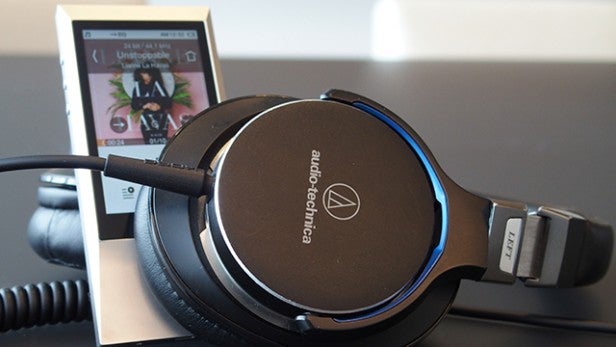 Once you get playing tracks, cover art is the focal point, with playback buttons situated at the bottom. It’s all standard fare here with just a couple of extras. If the tracks support it, you can view lyrics, while a press on the three-dotted options icon brings file information, including the sample and bit rates. There’s also a pretty basic equaliser here, but that can largely be left untouched.

Overall, the interface is probably the weakest aspect of the AK Jr, as it’s not super-slick and it’s slightly sluggish in places. It’s good enough, but we hoped for more.

The Jr sounds fantastic, but that’s the very least we’d expect from a £400 portable music player. Plugging in a range of headphones, from the expensive Audeze EL-8 to the Audio Technica ATH-MSR7 and the more affordable Skullcandy Grind, it shines across all music genres. The most satisfying results are with acoustic and live performances, where the extra detail, the wide soundstage and sumptuous low-end warmth really shines through.

If you can afford to spend big, listening to tracks in that maximum 24-bit/192kHz resolution is a joy. The problem is trying to find enough of it. It’s also expensive, with albums costing around the £15-20 mark, and file sizes can be as large as 100MB per track. Scrawling through a host of stores such as 7Digital, Qobuz, Bowers & Wilkins Society of Sound and Bleep, there’s not a great deal out there that’s offered in a Hi-Res Audio format. Classical music fans are well catered for, but if you’re looking for something more current, there’s not a great deal to choose from. 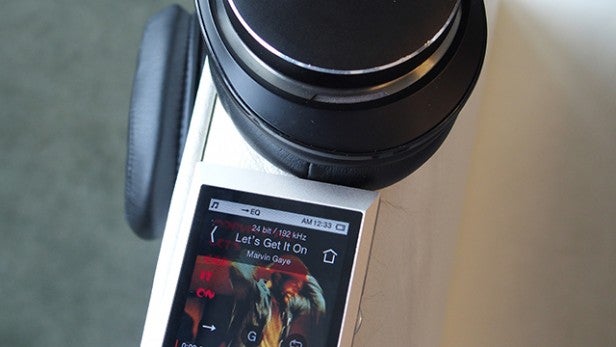 I managed to find Marvin Gaye’s iconic album Let’s Get It On in the 24-bit/192kHz format on Qobuz for a reasonable £8.73. Literally from the first strum on the guitar on the opening track, there was a noticeable difference listening to the same album on a streaming service like Spotify.

I also tried out electronic artist Caribou and his Our Love album, which I purchased in the 24-bit/96kHz WAV format. It certainly sounded great, but not necessarily that different from listening to it through a streaming service. It just didn’t blow me away like the Marvin Gaye album did. It was the same story with Lianne La Havas and her Blood album, which was available on 7 Digital at a maximum 24-bit/44.1khz format. The modern albums didn’t quite have that same wow factor.

Audiophiles will lap up the improvement in sound quality you get with the Jr. It’s just a shame there’s not a wealth of music to really make the most of the great hardware. 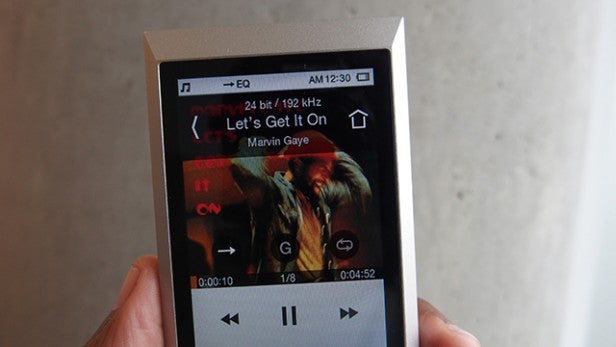 Should I buy the Astell & Kern AK Jr?

The AK Jr is a great place to get your Hi-Res Audio fix on the move. Despite my issue with the pointiness of the design, it’s still a beautifully crafted piece of audio kit that’s easy to use and sounds fantastic. While I’d have preferred some more functionality on the software front, and maybe the addition of Wi-Fi, these are some gripes I can live with.

But if you want a great combination of looks and audio, the AK Jr won’t let you down.

While it’s not cheap, the AK Jr is blessed with good looks and great sound quality to make it one of the best ways to take your Hi-Res Audio out and about.