”Update:” Our monitor came labelled as the i2353Ph, but the European model is the ‘i2353Fh’. This model number has been updated throughout the review.

The tech sector moves so quickly it can be hard to know when to take the next step. IPS panel monitors are a perfect example: just a few years ago a 23in model would have been aimed at professionals, measured several inches thick and typically cost in excess of £500. Today we have a 23in IPS monitor, thinner than a smartphone, retailing for under £150 and targeting everyone. Is it time to take that step? 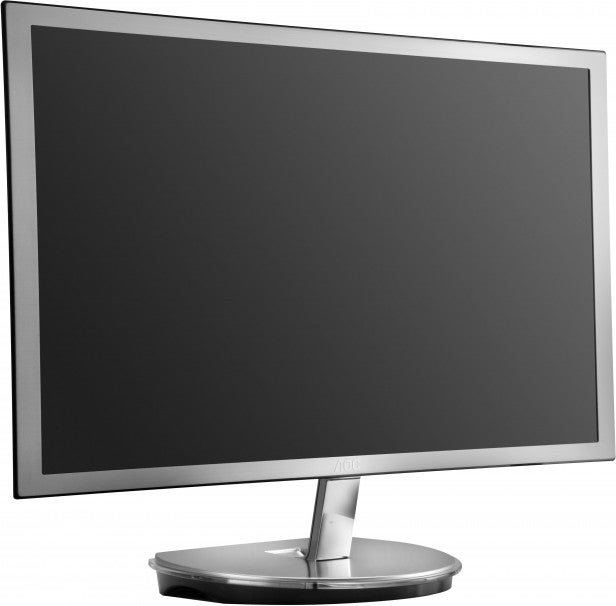 One look at AOC’s ‘i2353Fh’ would certainly suggest as much. AOC has long been known for its budget products (and they haven’t always fared well in our hands), but the i2353Fh is the first model we have seen which truly aims to punch above its weight. As such the first surprising figures don’t come from the screen, but the design.

The i2353Fh has dimensions (with the base) of 558 x 389 x 185 mm which is wholly unremarkable, but a weight of just 2.49Kg raises eyebrows and at 9.2mm deep the thickness of the display is positively jaw dropping. As far as we are aware, this is currently the thinnest IPS monitor in the world. Naturally enough AOC has pulled some strings to achieve this – the PSU is a power brick on the cable and inputs are in the chunky base (actually making them easier to connect/disconnect) – but the end result is no less stunning. Combined with its slim bezel, brushed aluminium finish and deliberately subtle AOC logo it will be a piece of design nirvana for minimalists and fans of Apple’s design philosophy.

Then again like any supermodel,  the i2353Fh does suffer from moments of dizziness under close inspection. Most practically is the i2353Fh’s limited adjustability. It has a limited 18 degree tilt angle (-4 to 14 degrees), but there is no height adjustment or pivot. Being so light the latter isn’t a huge problem and a book will solve the former, but the omission of both is certainly disappointing, if understandable at this price. In addition, while the i2353Fh looks superb in general, there are inconsistencies in the finish and build materials which take away some gloss. For example the bezel is brushed aluminium, the neck has a mirror finish and the base is matt silver and plastic. Nice but not exactly a new dawn in product design.

We dwell on the i2353Fh’s appearance because it will be a key sales point for many, but they are largely irrelevant if the monitor doesn’t perform. Thankfully here the i2353Fh delivers its second appealing array of figures.

As expected for a 23in 16:9 panel, the i2353Fh delivers a native ‘Full HD’ resolution of 1,920 x 1,080 pixels (0.265mm dot pitch) and 16.7m colours, but notably 178 degree horizontal ”and” vertical viewing angles. The Dynamic contrast ratio is quoted as a ridiculous 50,000,000:1, the static CR a more sane 1000:1, grey-to-grey response time is 5ms and there’s 250 nits of brightness. Happily AOC has opted for a matt finish to the panel so the i2353Fh has no problems with reflections from either natural or artificial light. In fact even shining a bright light directly onto the i2353Fh panel has little effect so room placement won’t be a problem and we wish more manufacturers would follow suit. 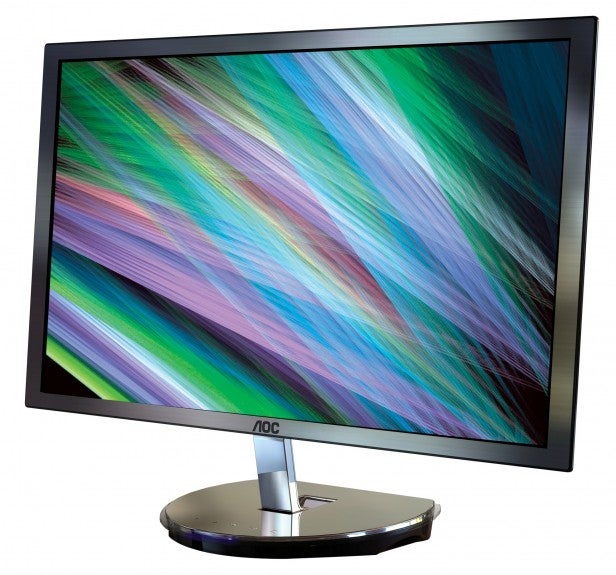 Looking at the i2353Fh’s panel, what immediately stands out are the viewing angles. AOC has used an ‘Enhanced IPS’ (E-IPS) panel which while keeping the cost down (E-IPS uses a wider aperture for light transmission enabling the use of lower-power, cheaper backlights) still exhibits the key benefits of IPS. Namely: improved viewing angles and better colour reproduction – especially in comparison to the older TN panels which typically proliferate affordable monitors in this price range.

As such the i2353Fh is a revelation. We initially had a setup issue where our Nvidia graphics card identified the i2353Fh as a generic monitor (even with drivers installed) and it looked lifeless at best, but removing this profile saw the i2353Fh come to life. Viewing angles live up to their claim holding both colour and contrast until such extremes as to make working from them impossible anyway. Despite using E-IPS the LED backlighting is bright yet easy on the eyes and there is little discernable backlight bleed. Colours are always a strong point of IPS panels and the i2353Fh is no exception. It has wonderfully natural colour reproduction with noticeable detail in shadows and dark areas. Owners of monitors with TN panels will notice a significant jump in quality. 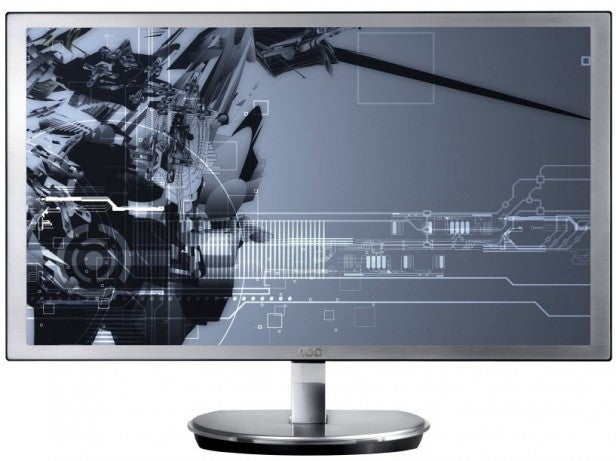 Where the i2353Fh does face close scrutiny is its response time – a notable weak point of IPS panels in general – and in an era of sub 1ms gaming monitors hardcore gamers may take issue with the i2353Fh’s GTG time of 5ms. That said we found no particular problems either gaming or when watching fast action film sequences and we suspect neither will the vast majority. Whatever we say specialists will specialise, but the i2353Fh is an extremely competent all rounder and may even be enough for aspiring amateur photographers.

Happily for casual users the i2353Fh is well setup out of the box and we’d advise little more than adjusting brightness to your personal preference. By contrast advanced users may find the i2353Fh’s menu settings limited with access to little more than brightness, contrast, gamma and RGB. This will put off more serious photographers, but at least makes navigation a breeze and the (often dreaded) touch sensitive buttons which control it are surprisingly responsive. 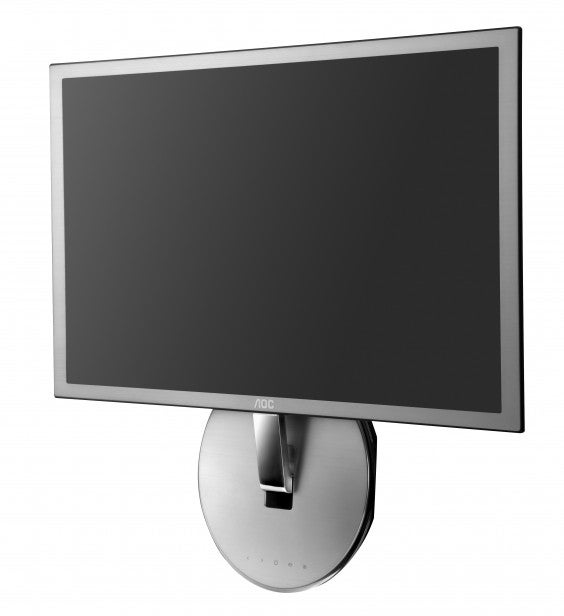 As for connectivity, the i2353Fh has dual HDMI inputs as well as VGA, but no DVI. An HDMI cable is provided in the box and for disgruntled users with DVI-only graphics cards AOC providers an HDMI to DVI adaptor. Those looking to watch copyright content will be pleased to know both HDMI inputs are HDCP Ready. The base also has a trick up its sleeve, being able to fold flat against the back of the monitor and double as a VESA wall mount. 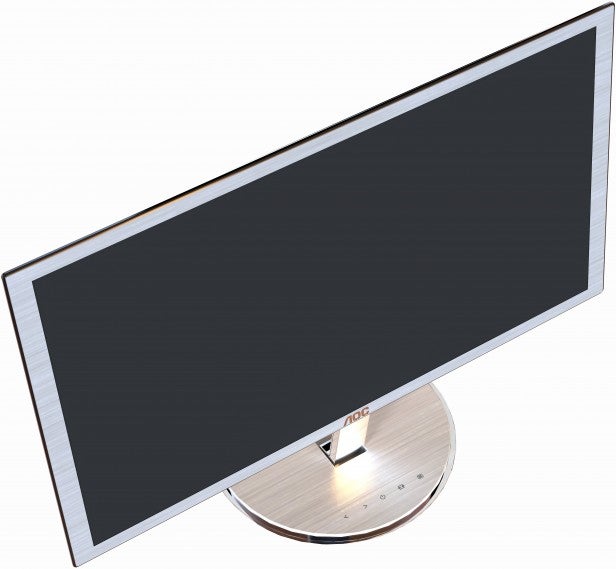 This isn’t the end of the tricks as somehow AOC has managed to cram 2x 2W speakers into the i2353Fh’s skinny lines, but with extremely tinny audio most will turn them off.  That said it is impossible to deny AOC’s determination to provide value for money. The i2353Fh retails for under £150 and comes with a three year warranty. Low prices are nothing new for AOC, but we feel the i2353Fh represents the first time the company has successfully competed on cost, style and performance simultaneously. We hope it is a sign of things to come.

”’Verdict”’
The i2353Fh is a breakthrough monitor both for consumers and AOC itself. Rarely does a product competing on price also break ground in terms of design, but the i2353Fh is a stunner and will sell by the bucket load on looks alone. It is therefore pleasing the quality of the panel lives up to expectations. An E-IPS panel won’t make its way into professional photography studios any time soon, but the i2353Fh’s colour accuracy and viewing angles are far better than TN panels at this price range. If you have been waiting for the right time to snag a bargain that time just came.