While we’ve reviewed a few Full HD (1,920 x 1,080 resolution) displays that managed price tags of less than £150 (the £130 BenQ G2222HDL immediately springs to mind), none are as affordable as the AOC F22s+ we’re looking at today. It can be yours for a mere £110, or around £100 if you’re willing to take a gamble on less reputable retailers. Either way, this makes it the cheapest branded display of its kind we’re able to find, so is it the bargain of the year or do you get what you pay for? 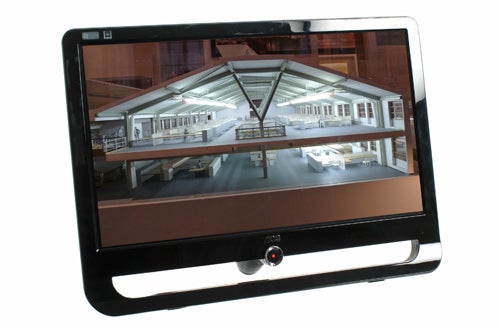 At first glance, there’s little to dislike about the F22s+. If you saw it in a shop you might remark on its unusual but attractive low-profile design, its matte, solid back and – to the casual observer – good image quality. However, the first problem reveals itself when it comes to assembly. Not that this is difficult: it’s simply a matter of clicking in the provided back leg, which features a handy release button for detaching it again. Yet it does reveal some dramatic flex in the monitor’s chassis and, more alarmingly, pushes away the lower bezel at the display’s front when pressure is put on the stand. This system also suffers from a complete lack of adjustability, which is rather unfortunate considering we’re hard-pressed to even remember the last time we came across a monitor that didn’t at least offer tilt.


The build quality issues aren’t just limited to the area around the stand either, as the top of the screen flexes way too easily. At its front, the F22s+ features an attractive blue-backlit (red-backlit in standby) power button with a chromed surround that acts as the control system, but it’s so loose that merely touching it results in rattle. The rest of the monitor seems reasonably sturdy, but overall the AOC doesn’t match the quality level of most budget displays.

Connectivity is even more disappointing, as all we’re given is a single VGA port. That’s right, you only get a single analogue input, which can suffer from analogue signal degradation and doesn’t feature HDCP, so you won’t be able to watch protected digital content such as Blu-rays.


At least the minimal controls inspire some confidence. Despite the aforementioned lack of quality, they’re really responsive and, if you can ignore their looseness, offer positive feedback. A d-pad is neatly integrated into the chrome ring around the power button, which doubles as menu/enter/exit. There are no other buttons to be found. 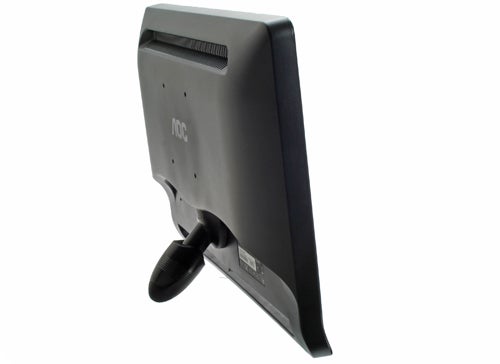 One long press of the power button is required to turn the screen on. Once on, a short press will call up the OSD in which short presses enter or exit menus, while another long press turns the F22s+ off. When not in the OSD, the ‘up’ button switches between presets that include all the usual modes, ‘left’ gives direct access to brightness, ‘right’ switches between aspect ratios and ‘down’ automatically recalibrates to compensate for the minor inaccuracies that can creep into an analogue signal over time.


Having a four-way pad really makes navigating OSD menus far easier than with most other monitors, and we wish it was something more manufacturers implemented. The F22s+ currently offers the most intuitive control system we’ve come across in a very long time, for which AOC deserves high praise indeed.

Like its physical controls, the F22s+’s colourful, cheap and cheerful OSD is easy to navigate, though it offers an absolute wealth of options and adjustments. Advanced controls for colour temperature, gamma, dynamic contrast adjustment and the incredibly handy Demo (a feature similar to BenQ’s Senseye, which lets you check the effect of alterations and new settings on one half of the screen) are joined by the unique (and somewhat odd) Picture Boost.


This latter ‘feature’ places a rectangular area on the screen where contrast and brightness can be adjusted independently to the rest of the display. It’s not immediately obvious what this is really for, but it could be useful for tweaking image settings. You could also stretch the box to fill the whole screen, then use the mode to apply specific settings very quickly as if it were a filter. 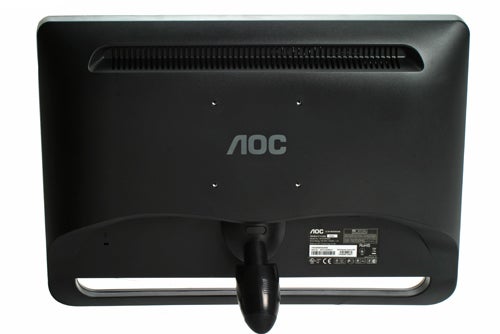 So far we have a mixture of good and bad, but due to the poor build the latter’s definitely outweighing the former, so let’s see if the F22s+ can be saved by its image quality. Without wanting to give away the game, we can already tell you this monitor surprised us, and we mean that in a good way. First let’s get the negatives out of the way: there’s some banding, vertical viewing angles are poor even by TN standards (slightly worse than the BenQ V2410T) and though backlighting is consistent there’s noticeable light bleed from both the top and bottom, which is particularly annoying when watching films with their inevitable black bars.


The positives list, on the other hand, is considerably longer. In contrast to the vertical viewing angles, horizontal ones are up there with the best TN-based monitors we’ve seen. After calibration colours are decent and greyscale performance is slightly above average, giving you a reasonable amount of detail in both dark and light ends of the scale. There’s no sign of ghosting during fast-paced gaming, no obvious dithering artefacts and, despite being analogue only, the F22s+’s picture was never less than hair-sharp, making small fonts easily legible. 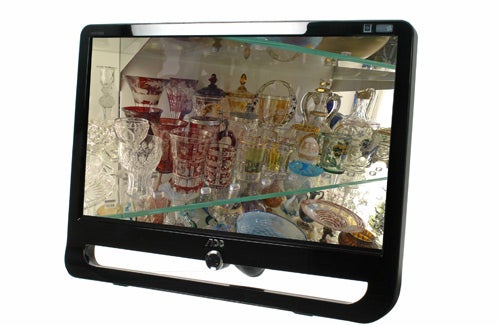 Overall, then, how does this affordable Full HD display hold up? Despite its unexpectedly decent image quality and even if build quality wasn’t a consideration, we would still strongly recommend that you spend the £20 extra required to get a monitor that will offer tilt and, far more importantly, a digital video input. There is plenty of choice at the £130 price point, including the award-winning BenQ G2222HDL and Iiyama ProLite E2208HDS, leaving AOC’s F22s+ for those unlucky few who really can’t afford the extra or for businesses on a strict budget.


Despite image quality that’s slightly above average for such a budget TN panel and one of the most intuitive control systems we’ve come across, the AOC F22s+ falls down on poor build quality and its lack of tilt or digital connectivity.