The AG322QCX is a monitor with a combination of features I’ve seldom – if ever – seen before. It measures 31.5 inches from corner to corner and has a 1800R curve to the panel, just like many other 30-inch+ gaming monitors.

However, unlike most such monitors this display doesn’t have an ultra-wide aspect ratio but a normal 16:9 one. Instead, the whole screen is stretched out to a larger size than usual.

What’s also stretched are the pixels. That is, instead of a 4K resolution as is common for 32-inch monitors – such as the Acer Predator XB321HK, this display has a 2560 x 1440 pixel resolution.

This means it doesn’t give you a huge desktop space to work with, instead providing one big, curvy, vision-filling display that’s potentially perfect for gaming.

In terms of physical design, this is almost a great-looking monitor. Its gentle curve, the on-tiptoes curved metal stand and the low-profile bezel combine to make for a surprisingly sleek-looking bit of hardware. 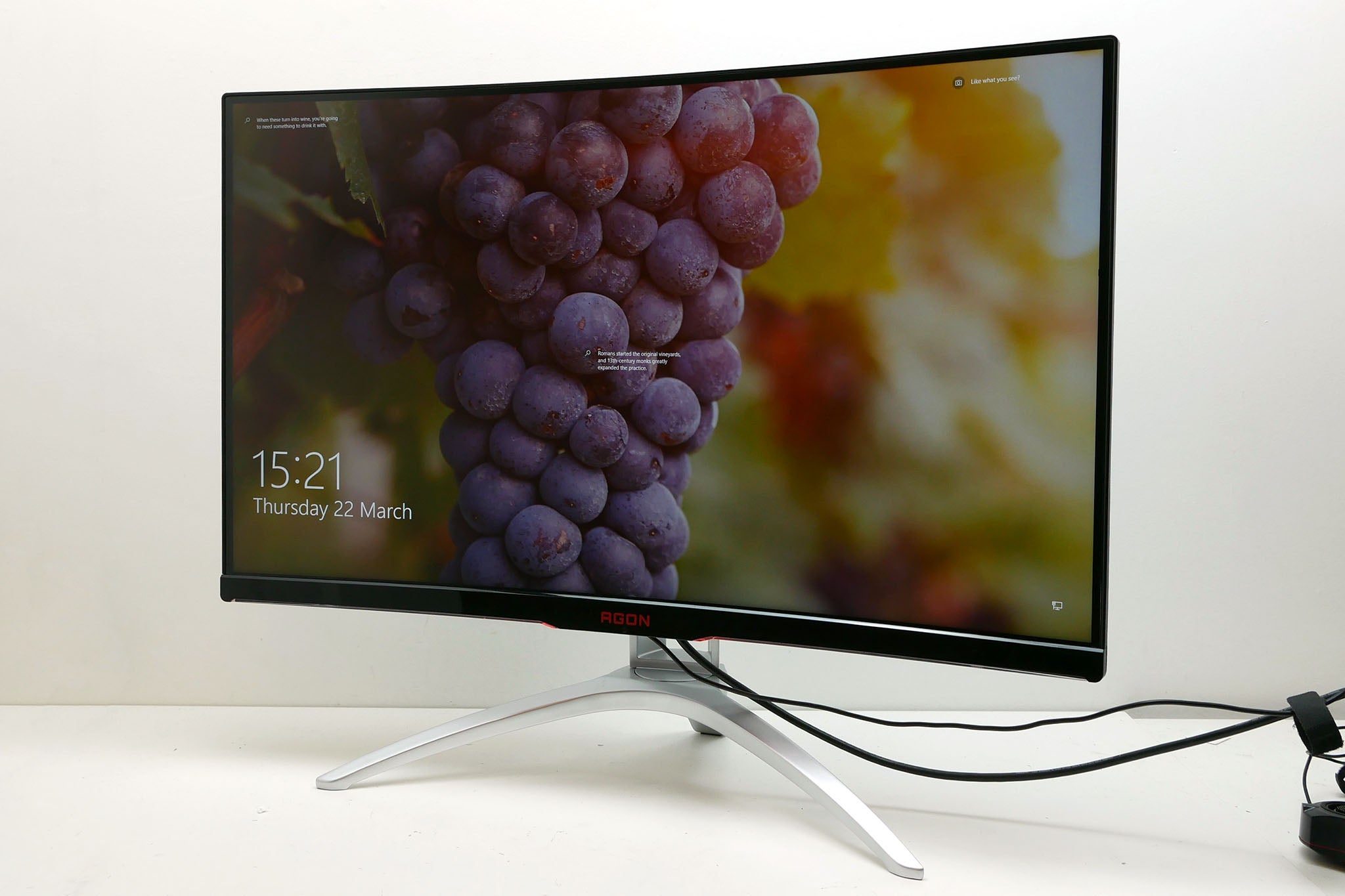 However, the glossy black plastic bottom bezel is rather chunky. It has a cheap-looking painted-on AGON logo (AOC’s gaming brand) and some illuminated sections that don’t translate to a classy feel overall. Round theback there are further illuminated sections and a silver-painted finish, giving it that full ‘gamer’ look.

As such, whether or not you’re a fan will depend on your style preference. If you’re after a more sedate, classy display – or even one with the genuine design flair of the Alienware AW3418HW – then the AOC probably won’t appeal. But if something a little more brash and bold is what you’re after then it will suit you fine.

Meanwhile, on a more practical note, this display offers plenty of features – including a quality stand. 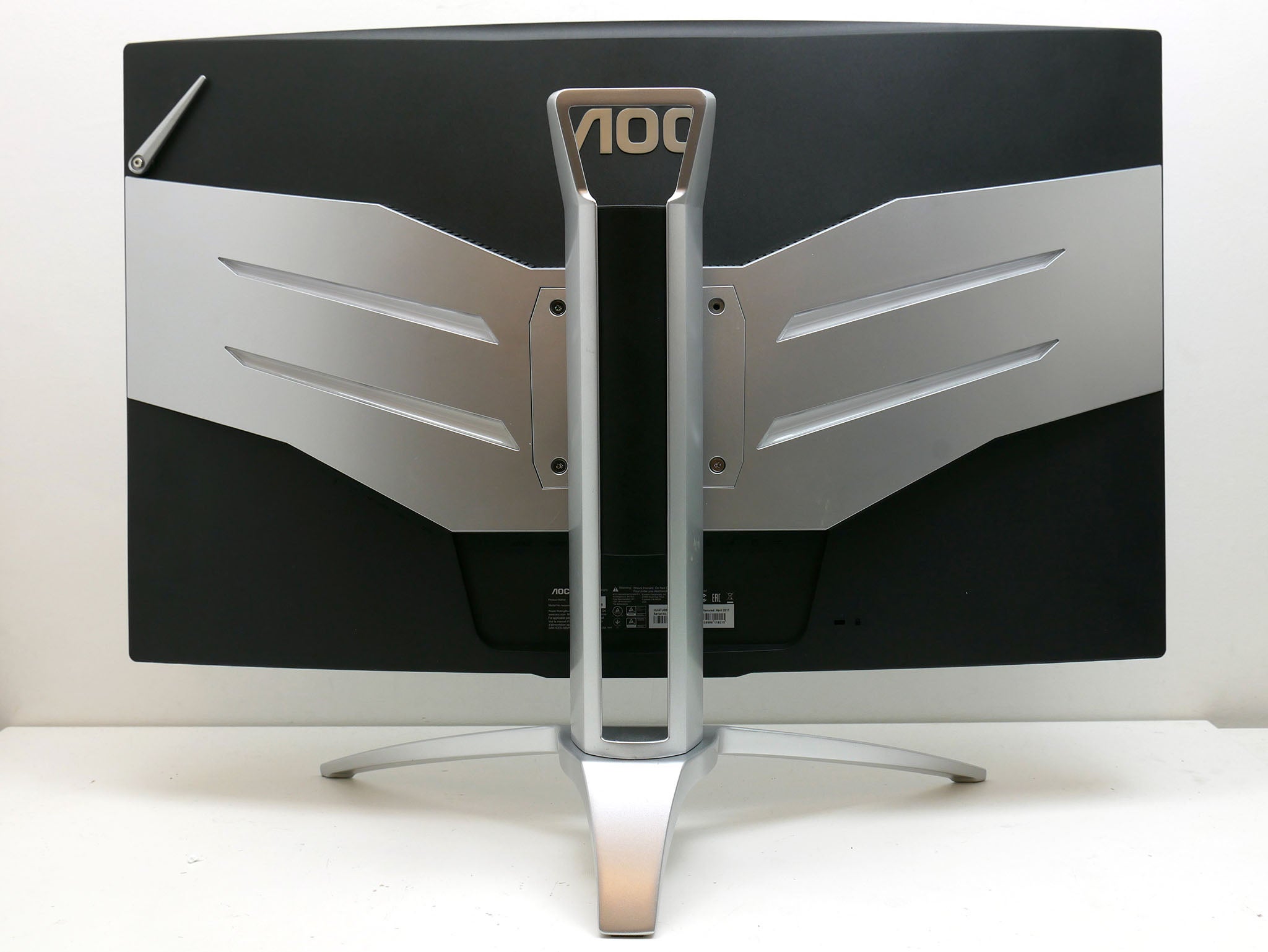 Presenting 110mm of height adjustment – which is actually short of the 130mm most monitors provide – it’s ample given how tall this display is already. It can rotate 30 degrees left and right and tilt from -5.5 degrees to 29 degrees. A pivot option to put the screen into a portrait orientation isn’t available, but this is perfectly understandable – and typical – for a screen of this size.

The stand can be removed, revealing a 100x100mm VESA mount, so you can use an alternative monitor stand. One thing to note about the included stand: it stands up on its tiptoes, which means you’ll have to be careful to ensure the rear foot doesn’t slide off the back of your desk, as it will take the whole display with it. A sufficiently deep desk is a must.

When it comes to connectivity this display offers a decent, although not outstanding, selection. One DisplayPort 1.2 is joined by two HDMI 2.0 plus a D-SUB connection for VGA input – potentially useful for use with older games consoles. 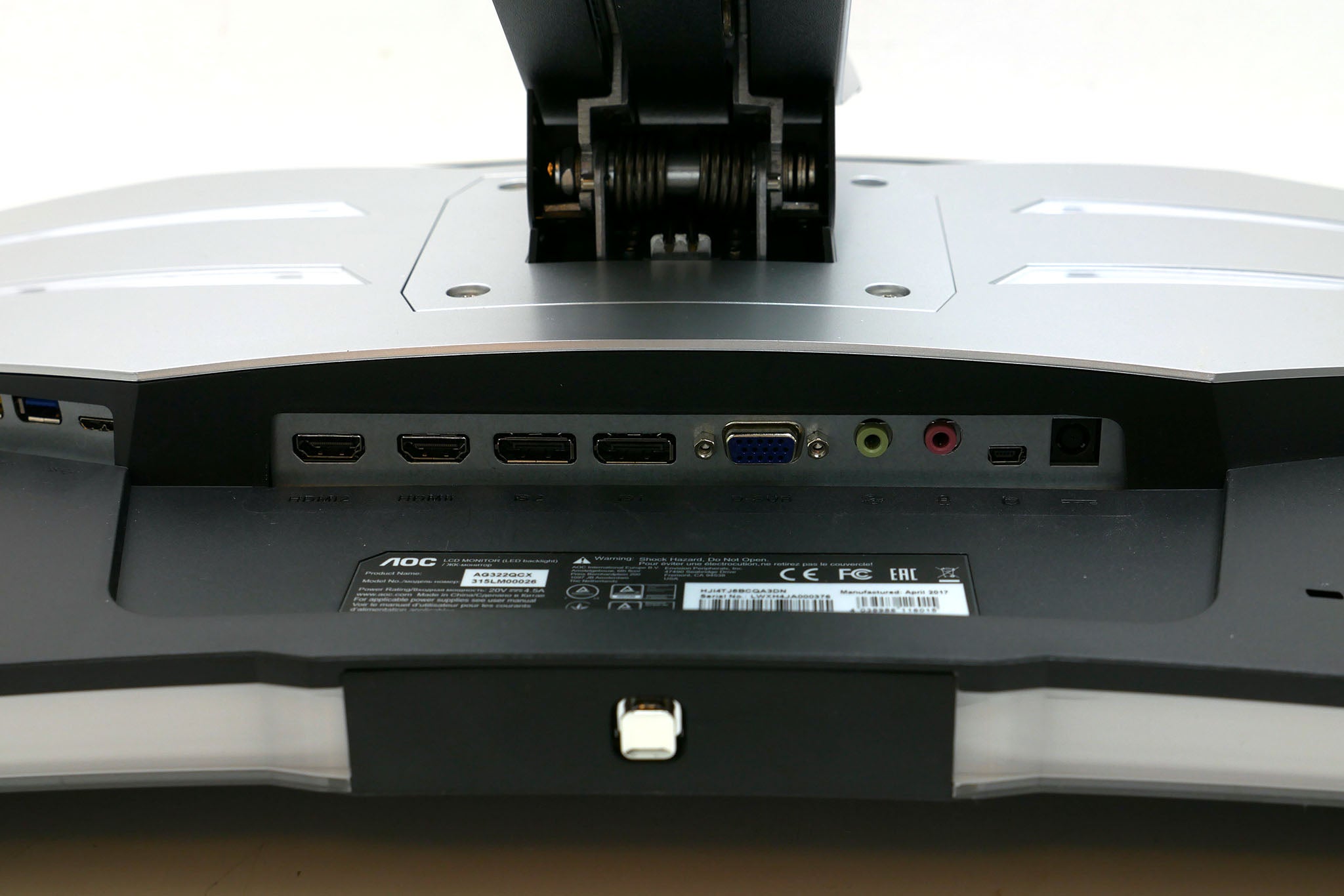 There’s also a USB hub, with two USB 3.0 ports round the back. The input for this hub is a micro-USB 3.0 – a strange choice – and AOC provides the cable.

What you do miss out on here is the panel of extras that sits on the right-hand edge of some of AOC’s other gaming monitors. Here, you’ll often find another pair of USB ports, a headphone jack, microphone input and a flip-down headphone stand. You do get a headphone jack on the AG3222QCX, but it’s awkwardly positioned round the back of the monitor. 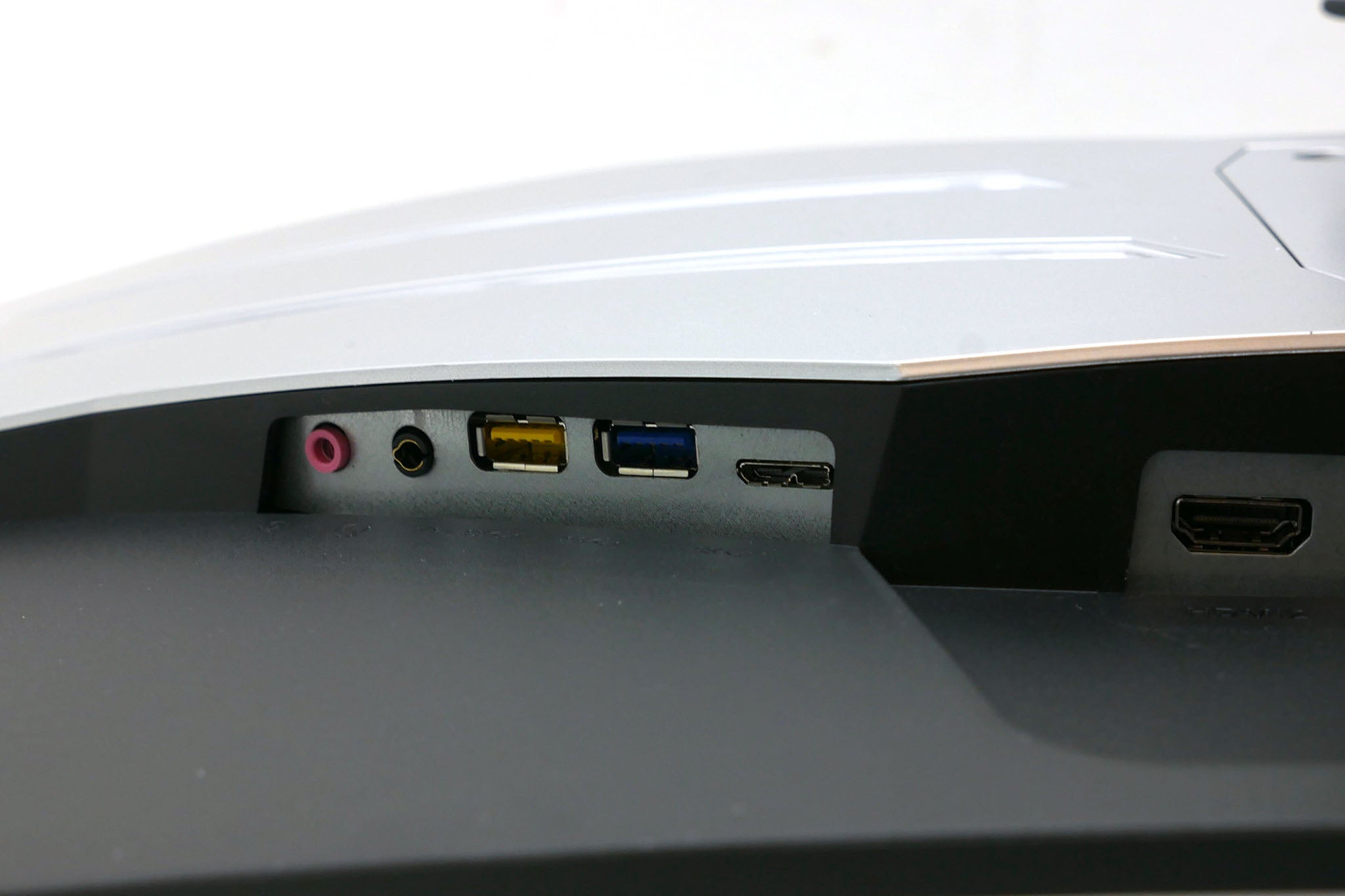 As for the display itself, the vast 32-inch diagonal is joined by a 2560 x 1440 resolution with the VA LCD technology able to refresh at up to 144Hz. It also boasts a response time of 4ms, while inside there’s FreeSync technology to eliminate tearing and stutter.

This display does require a bit of assembly; it arrives in three pieces. The base screws on to the stand via a thumb screw, while the display affixes to the stand via four conventional screws. It takes a bit of brute force and care thanks to the sheer size of the display – assembling on a soft surface such as a bed would be a good idea – but it’s an easy enough process.

AOC also provides all the cables you should need in the box. Intriguingly, this display uses an external power brick rather than an internal power supply, which is rare for a display of this size not using G-Sync – often, the G-Sync module takes up the space that the power supply would otherwise fit into.

When it comes to tweaking the display’s settings, AOC provides a comprehensive on-screen display menu system. This is controlled via a single mini-josytick on the underside of the frame.

AOC never quite manages to make its OSDs feel entirely intuitive to use – but, largely, this one works well enough, making it quick and easy to get things working as you like.

The menus are ostensibly split into seven sections, although one of these – Image Setup – is always greyed out and unavailable.

The six accessible menus, then, are Luminance, Color Setup, Picture Boost, OSD Setup, Game Setting and Extra. These fairly clearly indicate what they’re for, with the Luminance section taking care of brightness, contrast and gamma, while Color Setup provides a variety of colour presets as well as the option to control the colour balance manually.

The Picture Boost menu is an odd one since it just provides access to one setting called Bright Frame. This allows you to specify a rectangle of any size or position, and then control its brightness and contrast independently of the rest of the screen. We suspect there’s a good reason that no other manufacturer includes such a setting on their displays.

OSD Setup is where you can change the position, transparency and language of the OSD, while Game Setting has several potentially useful features. Overdrive is the main one most users will be interested in, since it allows you to boost the pixel responsiveness. Turning this up to Strong really helps tighten up the feel of the display during gaming.

Shadow Control can also be useful for boosting the brightness of dark parts of the image, making it easier to see enemies hidden in the dark. There’s also a low input lag mode, the effectiveness of which wasn’t immediately obvious, and a Game Color option that lets you boost or reduce the vividness of colours.

A Game Mode option provides a number of presets and user-definable options. They largely seem like a waste of time, however; they only change otherwise available settings, many don’t seem to be of much benefit and selecting any of them locks out most of the other options in the menu.

Crucially, the display largely arrives well set-up and ready to go, so you should only need to adjust the brightness and crank up the overdrive setting before you can play away.