Android 10 is not a monumental upgrade. If you don’t seek out the changes, you are unlikely to notice all that many of them. Dark Theme makes the most dramatic addition, and it’s potentially an important feature if you don’t like the white-heavy appearance of the Pixel UI and Android One. The rest? It seems less important, and there’s not enough to make this seem a truly major revision of Android.

Android 10 sounds like a more dramatic upgrade than it is. It has reached double figures, but when you first install the software you are unlikely to notice any major differences.

The look of the home screens hasn’t changed, the default appearance of the apps menu is barely any different. And while there are some alterations to the notifications drop-down, most would struggle to pin-point them without having the older version for comparison.

Some of you may be disappointed and, at the time of writing, not all of the promised features are available on the Google Pixel 3A XL I’ve used to try Android 10 out for the last few weeks.

However, there are at least two great features you may want to try out when you get the upgrade, particularly if you have an Android One phone.

Dark mode is the part to check out first if you want clear and obvious progress in Android 10. This inverts the basic colour scheme of Android. White menus become black, black text turns white.

This is a big change for vanilla Android. Its “white page” apps menu has come to define the look of the system, contrasting with the darker style of not just third-party UIs, but the appearance of older versions of Google’s own.

It is far from new in a wider sense, though. OnePlus made Dark Mode a key feature of the OnePlus 2, back in 2015. 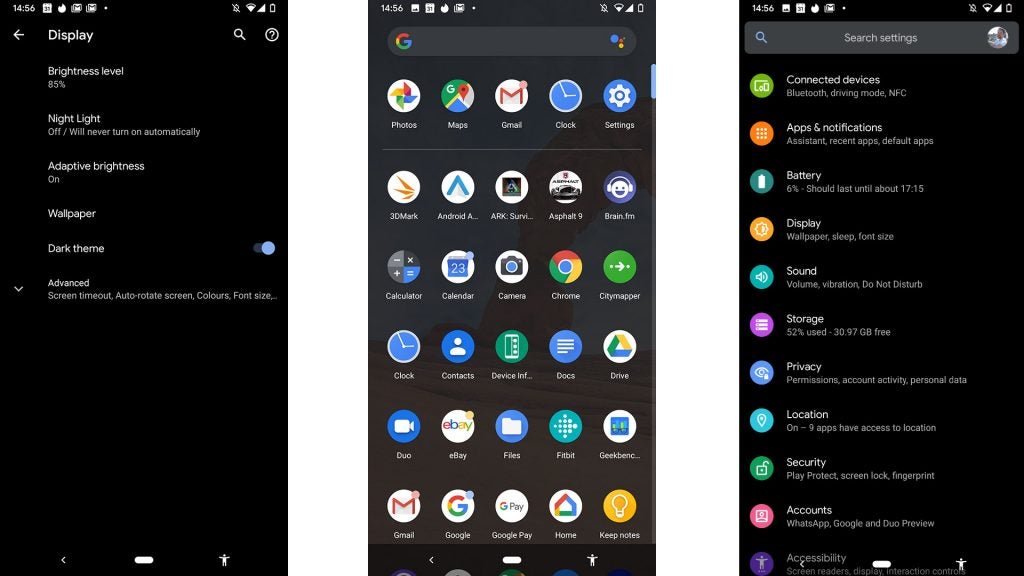 Google’s adoption of it is important for the usual reason – a system-wide API. This is the standard app developers use to switch the layout depending on whether you use the darker theme or not.

However, Google does not take a universal approach in Android 10 at launch. Turn Dark Mode on and even most of your Google apps won’t switch over automatically. YouTube has its own Dark Mode switch, but that has been available since 2018. As I write this, there is no dark option in Google Mail or Chrome.

What does this tell us? Google has sped up the release of Dark Mode as a primary Android feature because Apple added it to iOS 13. And when you have experienced it in other phones, for years, it’s difficult to see it as all that dramatic a shift.

This is not to suggest it’s not welcome. Ever since the Pixel series arrived, I’ve found the purest version of Android too restrictive. Every time I’ve switched to using an Android One or Pixel phone the white apps menu has seemed stiff and staid, the UI equivalent of oatmeal for lunch.

You get used to it, of course.

The dark/light configuration I’d actually choose still isn’t possible either. You can’t have a dark apps drawer and a light notifications drop-down, which arguably offers the best visual clarity for the top layers of Android. It is still, ultimately, a bit restrictive, but you should definitely try it for at least a few days.

Android 10 has a feature most people don’t need, but that I think is quite brilliant. It’s Live Transcribe, half-hidden in the Accessibility menu in Settings.

This uses Google’s speech-to-text engine to turn interviews, presentations and conversations into text, as they happen.

It’s a fairly simple application of this technology. Live Transcribe does not attempt to separate out different speakers or record the audio so you can fix the text later on. But it’s an Accessibility feature, and it certainly is accessible. 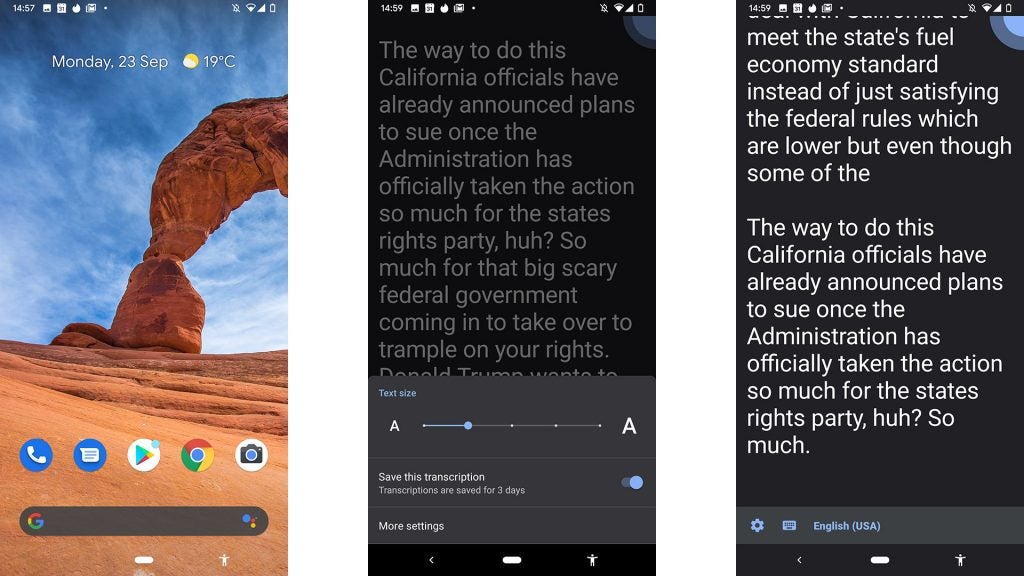 When turned on (in Settings), a little icon of a person appears in the soft key bar. Tap this and Live Transcribe loads and starts listening out for speech, which then appears on the screen.

It can recognise and filter out music and certain kinds of ambient sound. And while the transcription isn’t perfect, Live Transcribe is much better than most comparable services at picking out cultural references, like the names of famous figures and bands – Google, of course, knows about all of that stuff.

Its transcription speed is impressive too, letting the hard-of-hearing use it as a conversational aid. You can also choose the size of the font, useful if your vision isn’t perfect either.

Google has also changed the Sharing menu. This is what you’ll see when you try to share a link or a photo.

If you saw this version and Android 9’s side-by-side you might not be able to guess which is the “improved” one, but I do think the Android 10 take is better after using it for a while. It has greater flexibility to change based on the context. 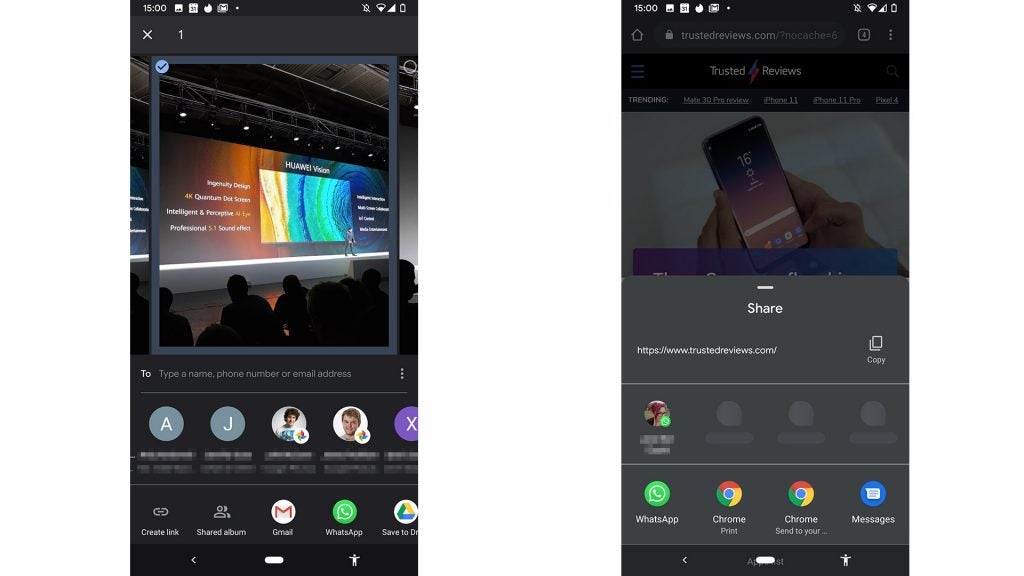 Both versions are informed by machine learning, but Android 10’s Sharing menu does seem to put what you want at your fingertips more quickly. For example, when I want to share a link from Chrome I almost always simply want to copy the address. Android 9’s Sharing menu leads you to send the link to an app (invariably WhatsApp in my case), but Android 10 puts the “copy url” shortcut at the top.

The change is not huge. In Google Photos, for example, it looks much the same on the Android 10 Google Pixel 3A XL as it does on the Android 9 Motorola One Action. The Share menu simply seems to have more scope to change based on context and behaviour, which is smart.

Android 10 includes a new Digital Wellbeing feature called Focus Mode. However, this isn’t available in the version of the software currently available to the Pixel 3A XL I’m using, but it will let you mark certain apps to block when you turn Focus Mode on.

Notifications from these apps won’t appear, and you won’t be able to run them either. It’s a self-imposed nanny state. It’s currently a little hard to tell how useful Digital Wellness is to people, as there’s no real data on how many use the Digital Wellness suite, or how useful it has been to those people.

I expect some of those originally keen on the idea have found it hard to stick to. Like mindfulness, consistently sticking to healthy principles day after day is easier in theory than practice.

There’s reportedly more coming too. Chrome will let you limit the time spent browsing specific websites, handy for time sinks like Reddit. However, when most of these sites have their own apps, including Reddit, this addition doesn’t seem all that important for too many.

New “quick replies” are not in place yet either, in the Google Pixel 3A XL’s version of Android 10. These will let you send, for example, Google Maps links from the drop-down menu rather than just instant machine-learning-generated “canned” replies. This will support messaging apps as well as SMS, but both WhatsApp and SMS aren’t showing these improvements on my test phone.

Android 10 adds a way to share Wi-Fi network credentials with other Android users too, through a QR code. This avoids you having to type in the network key on the other device.

The good news: you don’t need an Android 10 phone at both ends to use it. I tried it with a Motorola One Action running Android 9.0. Its custom camera app recognised the QR code, displayed a Wi-Fi icon that I could then tap to use the link. 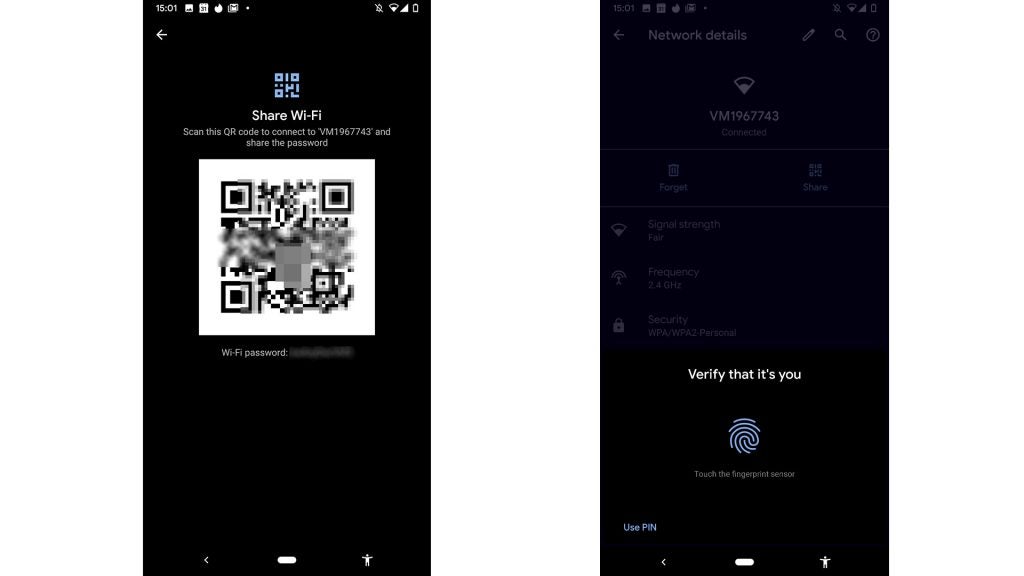 I’m not convinced many will even notice this feature exists, though. You have to dig into the Wi-Fi menu, tap though to the network you want to share and select the Share button.

You could also argue that this feature’s position deep in the Settings menu suits its narrow appeal. Most of us don’t need to share our home Wi-Fi passwords all that often. And the sticker on the router, or perhaps the fridge, sent by your provider usually does the job just fine.

Android 10 is not a monumental upgrade. If you don’t seek out the changes, you are unlikely to notice all that many of them.

Dark Theme makes the most dramatic addition, and it’s potentially an important feature if you don’t like the white-heavy appearance of the Pixel UI and Android One.

The rest? It seems less important, and there’s not enough to make this seem a truly major revision of Android. That said, Live Transcribe may be a huge benefit for those with poor hearing who struggle to make out speeches or presentations, perhaps at work or at church.

If you love the idea of Live Transcribe but don’t have Android 10 yet, you can download it in app form at Google Play.

So where’s the excitement in Android 10? Some of its most important changes aren’t appreciable in a normal phone, as it’s designed to pave the way for folding phones. We’ll have to see whether Google’s folding phone software does a better job than the custom UI changes Samsung made in the Galaxy Fold.