What this setup gives us, though, is the ability to test the effects of FreeSync at different monitor frame rates. After all, given the stuttering that FreeSync aims to fix is directly related to the response time of the monitor, logically a higher refresh rate would reduce the perceived effect of FreeSync.

As such we tested with the monitor set to 60Hz, 100Hz and 144Hz. We then tuned the graphics card clock speed so that it delivered frame rates just below these frequencies, keeping the monitor in a range that would make it stutter when engaging normal V-sync. 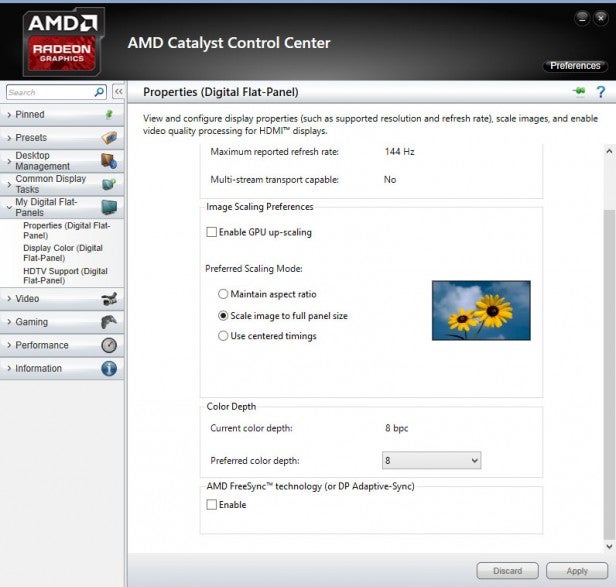 We were careful to pick a frame rate that is representative of the performance you’d be aiming for if you bought a monitor that was capable of these frame rates (what’s the point in buying a 144Hz monitor if you only game at 70fps) but also not to have them run too fast such that the majority of the time they were hitting above the refresh rate and thus eliminating stutter. This meant we were running at around 40fps in 60Hz, 80fps in 100Hz and 110fps in 144Hz.

Those that have never used a high refresh-rate gaming monitor may care to note that they really do make a big difference to the responsive feel when gaming, assuming your graphics card can deliver the high frame rates. IPS monitors running at 60Hz may be the best for image quality but if you’re just after the best gaming experience these high frame rate monitors are well worth a look.

We started our testing with the most favourable scenario for FreeSync (and G-Sync) to show what it can do. Running at around 40fps with our monitor set to 60Hz, the slow response time means that any stuttering is very noticeable and sure enough while gaming with normal V-sync turned on we found the stuttering to be bad enough to affect your ability to play the game.

It’s not that you notice any individual stutter – unless you’re really looking for them – but rather that the whole experience feels ponderous, with mouse movements trailing what’s happening on screen. The result is that it’s more difficult to aim and perform complex movements that require precise timing.

Turning V-Sync off and this sense of gaming in treacle is largely eliminated but then you get a torn image that distracts from your immersion in the game.

Turning FreeSync on in this scenario is a revelation as you suddenly get the relatively responsive feel you get with no V-Sync but with complete, unbroken frames. The result is a much more immersive, enjoyable gaming experience.

This is where we feel FreeSync really has the most impact as it means those with more modest gaming hardware can now game at higher detail settings and resolutions without affecting their performance. Instead of compromising to ensure your PC never drops below 60fps you can now confidently game at 40fps, or even a little bit lower. 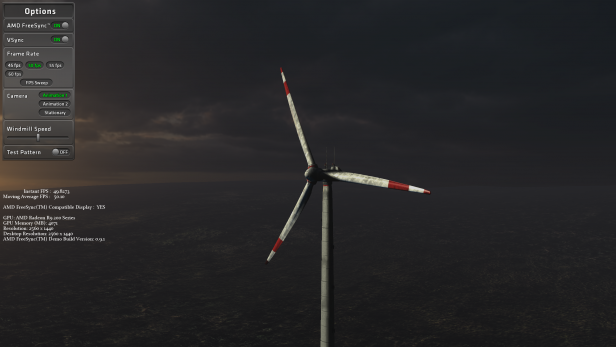 AMD Provides a tool that makes it easy to see what difference FreeSync makes.

For those whose PCs and monitors can run at higher frame rates the good news continues. Jumping up to 100Hz and around 80fps, the overall sense of immediacy takes a clear step up. In particular, even with V-sync engaged there’s much less of a sense of lag between your movements and what happens on screen. That said, it’s far from eliminated.

And if you thought a higher frame rate and refresh rate would mean less impact from tearing, well we can assure you that isn’t the case. Turning V-Sync off results in just as much of a chopped up looking image as at 60Hz.

Turn FreeSync on, then, and again everything just suddenly feels smooth and, thanks to the lack of tearing, more immersive. To try and pinpoint any moment where the effect is directly noticeable is even more difficult than at lower frame rates but it is undoubtedly there – this is no placebo.

Finally, moving onto 144Hz, we were again somewhat surprised to see just how much of a difference FreeSync makes. While its impact is certainly reduced even further there is still a clear step up in smoothness compared to V-Sync alone. 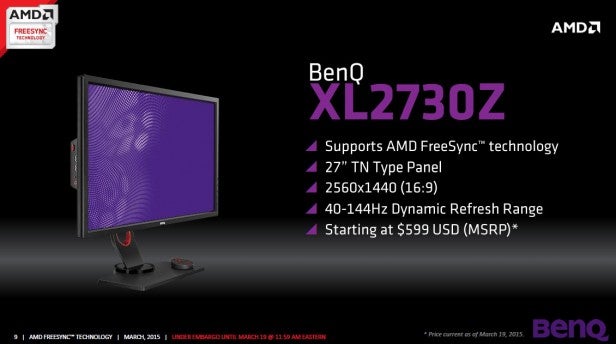 Should I buy an AMD FreeSync Monitor?

Overall we’re totally won over by AMD FreeSync. Just as we found with Nvidia G-Sync, the impact of a technology that removes tearing and stuttering is far greater than you might imagine, making gaming smoother, more immersive and thus more enjoyable.

Moreover, with FreeSync AMD has created a technology that truly feels like the next leap in monitor technology. Nvidia may have shown the way with G-Sync but the open solution AMD has pushed for is clearly a better long term proposition for monitor manufacturers and consumers. We’re convinced it will simply be standard in a year or two.

As such the question is whether you should buy now or wait until it’s commonplace and you don’t have to pay a premium for the privilege – or a little less of one, anyway.

Unlike many computer components, monitors tend to be things we don’t upgrade until they either conk out or we go for a significant size/resolution upgrade. As such, for those who aren’t otherwise in the market for a monitor upgrade, we don’t feel FreeSync is quite enough on its own to be worth upgrading. This is particularly true as you can’t use both monitors together and still use FreeSync.

As for those already in the market for an upgrade, the selection of monitors available is still relatively limited and you’re paying a premium of around £50-80. But, for the sake of having the technology early and knowing that It’ll be an upgrade that lasts you many years to come, we would be strongly inclined to buy a monitor with FreeSync rather than without.

Eliminating tearing and stuttering in 3D games may not sound like the most compelling reason to upgrade a monitor, nor is it as exciting an upgrade as a graphics card that’ll get you extra fps. However, the reality is that, assuming your graphics card sometimes struggles to meet your monitor’s maximum fresh rate, it makes every single game look and feel better, and there aren’t many PC upgrades that can claim that.