As usual, the Fire 7 runs a re-tooled version of the Android operating system called Fire OS. Upon first glance, though, the Android connection isn’t obvious because of the extensive interface and app changes that have been made.

For example, gone are the usual Chrome browser and Google Play Store apps, and in their place are Amazon’s Silk browser and Amazon Appstore. Similarly, you’ll find Amazon’s Newsstand and Music apps installed instead of their usual fresh-out-of-the-box Android counterparts. 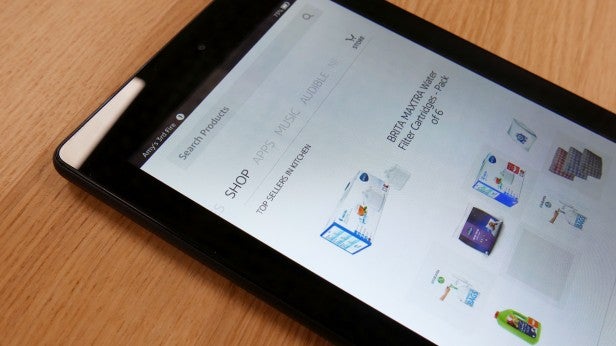 Clearly, then, there’s a concerted push towards Amazon’s apps and services, including its many digital services such as Audible and the Kindle bookstore. The interface scrolls horizontally to show different screens geared towards different media, such as Books, Video and Games.

It’s all an unsubtle attempt to put as much of Amazon’s content in front of your eyeballs, and it leaves the Fire OS interface feeling cluttered. In fairness, you can attempt to ignore all of the other homescreens and stick with the main screen, which provides access to your usual apps in a vertical list. 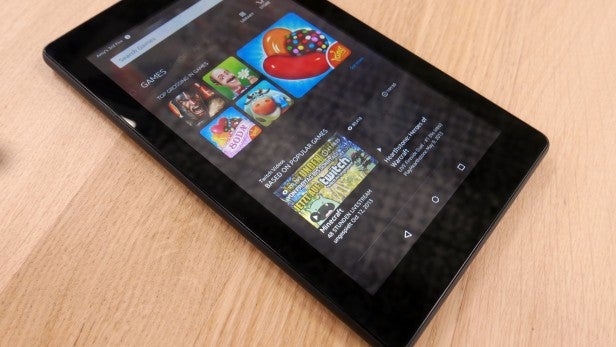 As for the Amazon Appstore, don’t expect to find everything you can find in the Google Play Store. Super Mario Run is currently setting the Google Play Store alight, but it’s not available here. Not all major banking apps are supported, either. The vast majority of apps are now available, but you’re still going to find yourself occasionally caught out.

OK, so Alexa is really the big software-related change. It’s now available by a long press of the circular home button, which typically gets you access to Google Now on a standard Android tablet.

All of the usual Alexa ‘skills’ – Amazon’s name for Alexa’s multitude of smart abilities – are available, such as getting a flash briefing of your news and agenda, checking the weather and setting timers. Really, though, things come alive if you have any smart home devices set up.

I have a few LIFX smart bulbs and a Logitech Harmony hub that play nicely with Alexa, and having the Fire 7 tablet to hand proves useful for when my Echo Dot is out of voice reach. Being able to ask the Fire 7 to turn on my TV is still a wonderful little shortcut. It’s just a shame that the Fire 7 isn’t always listening the way an Echo device is, but it’s understandable why this isn’t the case, with it being a tablet and all.

Not a great deal has changed with the Fire 7’s performance, as it still has the same internal specifications as before. Powering the show is a quad-core MediaTek MT8127 1.3GHz processor paired with a slightly paltry 1GB of RAM.

These combine to provide acceptable if unremarkable performance. Navigating around Fire OS feels reasonably responsive, peppered with occasional slowdown and hiccups. Nothing to distract you too much, but still enough to negatively impact the overall experience and leave you in no doubt that you’re using a cheap tablet.

Hit the Library button and you sometimes get greeted with a 2-second pause before it opens, for example. Tapping a magazine on the Home screen can take 3 seconds before it opens, all the while you’re left looking at a black screen. 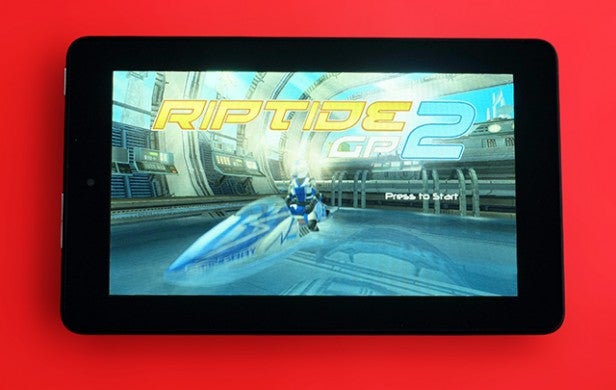 Performance unsurprisingly was around the same as last year’s model with a single-core score of 359 and multi-core score of 1171 in Geekbench 3 (the newer version of Geekbench isn’t available on the Amazon Appstore).

Playing games is viable, with casual titles not causing the tablet to break a sweat. Swiping through a few games of Candy Crush is an enjoyable enough experience. More graphically taxing games like Real Racing 3 are playable, but it’s at a reasonably low frame rate, albeit a consistent one.

Internally, the one upgrade has been the addition of dual-band Wi-Fi. So if your router has 2.4GHz and 5GHz support, you can take advantage of the faster network transfer speeds of the latter if you want to access content off a NAS or home computer. It should also mean holding a more stable network connection while you’re streaming off your favourite on-demand service.

With your expectations in check, the Amazon Fire 7 is a decent enough performer and, again, you need to keep in mind the low price. All that considered, it’s actually very, very useable.