If you were in the market for an inexpensive tablet, Amazon’s Fire range has always been a decent choice. While they never set the world alight in terms of specifications and design, they remain a much better option than many other tablets vying for the low-end of the market.

Thankfully, this year’s minor update to the Amazon Fire 7 remains worlds apart from many of the uber-cheap tablets you might impulse buy at a supermarket with your morning cornflakes. Not a great deal has changed from the previous model – the design is the same, as is general performance, save for a small upgrade to the display in terms of clarity but, sadly, not resolution.

The big addition is Amazon’s friendly digital assistant, with Alexa being available through a tablet for the first time. If you’re already on first-name terms with Alexa through an Echo or updated Fire TV, the Fire 7 proves a handy extra voice remote to have around the house, as well as being a tablet to meet basic needs – especially if you’re already immersed in Amazon’s ecosystem.

As before, the cheapest model comes with 8GB of storage and Special Offers, which delivers ads to your lockscreen, for £50. There’s also a 16GB option for £60. If you want an ad-free experience you need to add £10 to each corresponding model.

Put the updated Fire 7 next to its predecessor and you’ll be hard pressed to tell them apart. It’s still far from a svelte tablet and one that’s a little on the heavy side. It has a large bezel surrounding the display and it still feels plasticky with a back that flexes if you press on it.

But while that might all sound overly negative, the Fire 7’s build and design is befitting a tablet that costs less than a newly released video game. 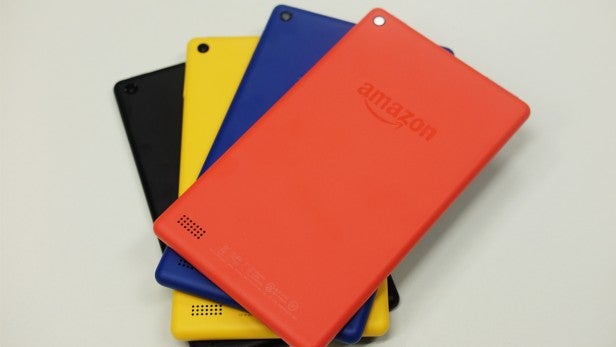 There’s a specific model aimed at young ones with some additional rubberised protection, but the standard model still feels like it’ll deal with being thrown around with reckless abandon on your commute.

The design is also slightly less bland if you opt for one of the more colourful and fun Fire 7 models, of which there are yellow, blue and red variants. I had the black model in for review and it’s difficult to feel a similar level of excitement for that.

All of the buttons are placed on the top of the tablet, in addition to the headphone jack and Micro USB charging point. Along the edge you’ll find the microSD slot behind a flap, which will let you expand the storage by 256GB. 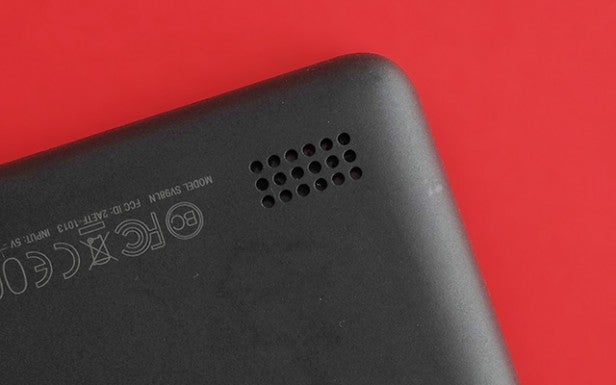 On the back, towards the bottom corner, is a single mono speaker that delivers tinny, underwhelming sound. Nothing out of the ordinary for a cheap tablet, so just consider using headphones whenever you can.

While the build quality might punch slightly above the Fire 7’s low, low price, the screen is very much what you would expect for a cheap tablet. The 7-inch display’s resolution remains 1024 x 600, which gives a pixel density of 171ppi. This equates to big, blocky pixels, which are particularly bad for rendering smooth-looking text and also not great for images.

If you want to use the Fire 7 as a tablet for predominantly reading your Kindle books, that text rendering isn’t ideal and makes the experience fatiguing. Still, web browsing on the Fire 7 isn’t the worst experience in the world. 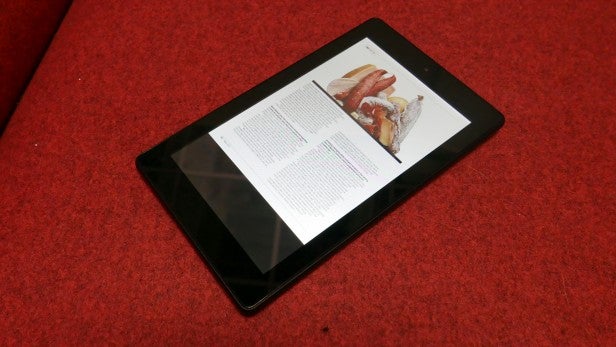 Then there’s how the resolution and aspect ratio handles magazines, which is a big deal for Amazon’s new Prime Reading selling point. Not only is the resolution an issue in terms of clarity, but the aspect ratio means when zoomed all the way out on a page, you often have a big black bar at the bottom of the screen. Using pinch-to-zoom to get a closer look at the page then ends up with a rather blurry experience due to that low resolution.

Amazon has said that the newer IPS panel has better clarity and contrast. If there’s a difference, it seems marginal. Colours still aren’t particularly punchy and blacks aren’t great, either. Watching videos on Netflix or Amazon Prime Video does a decent enough job, though. 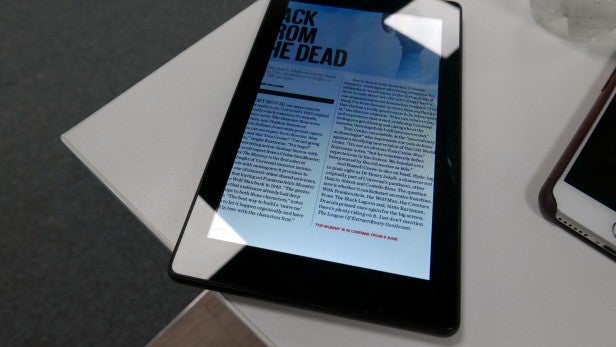 There’s no ambient light sensor, so you’re left manually adjusting the brightness. The brightest setting will just about get you by on all but the brightest days outdoors, but you still might find yourself struggling.

There’s a Blue Shade mode that reduces the blue light for using the tablet at night without disturbing your sleep. It’s far from an elegant approach, especially when compared to something like Night Shift on an iPad. Blue Shade just makes your screen really, really orange tinted.

I found the display picked up greasy fingerprints very easily as well, so be prepared to constantly wipe it down. 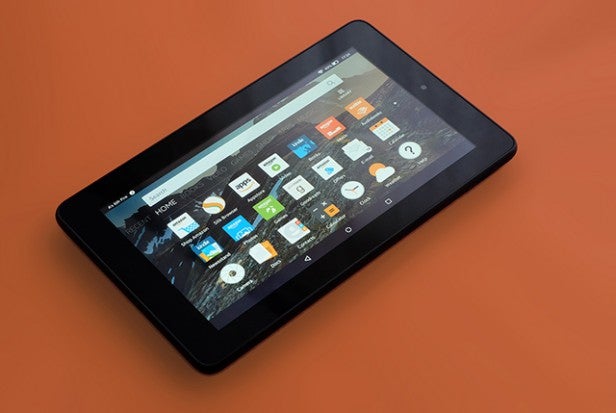 Ultimately, it’s a shame there haven’t been improvements to the screen resolution at least, but then that’s perhaps asking too much for a tablet at this price. Considering the Fire 7 could be seen as a gateway to Amazon’s ebooks, digital magazines and store front, perhaps Amazon could’ve looked at it as being subsidised with the view of recouping elsewhere.