Effectively an Echo Dot, the Amazon Echo Dot with Clock (4th Generation) adds an LCD display to the front so that you can see the time, view timers and get the current temperature. Is this add-on worth an extra £10? Yes, if you could do with a clock in a room and don't want to have to upgrade to one of the smart displays. Otherwise, it's business as normal and you get all of the features of the new Echo Dot. If you've got the old Dot with Clock then this probably isn't worth upgrading to, but for everyone else that wants the display, this is a great smart speaker.

So, you get all of the features and new design of the Echo Dot (4th Generation), plus an LCD screen to show the current time and a few other things. If you can use the clock, then this smart speaker is well worth the £10 extra over the basic Dot.

I love the new design, as the soft material cover and curved body look much neater than the old hockey-puck design. You can only get the clock in Glacier White and Twilight Blue, not the Charcoal colour of the Dot. As with the regular Dot, the Clock version is mostly made from recycled materials.

I like the way that the buttons (Action, Mute, Volume) blend into the design, and that they’re slightly raised and are different shapes, making them easier to feel for by hand. Around the back, you get the power input and a 3.5mm audio output. Arguably, the audio output is slightly more useful here than on the Dot, as you may want to connect an external speaker and still see the screen. 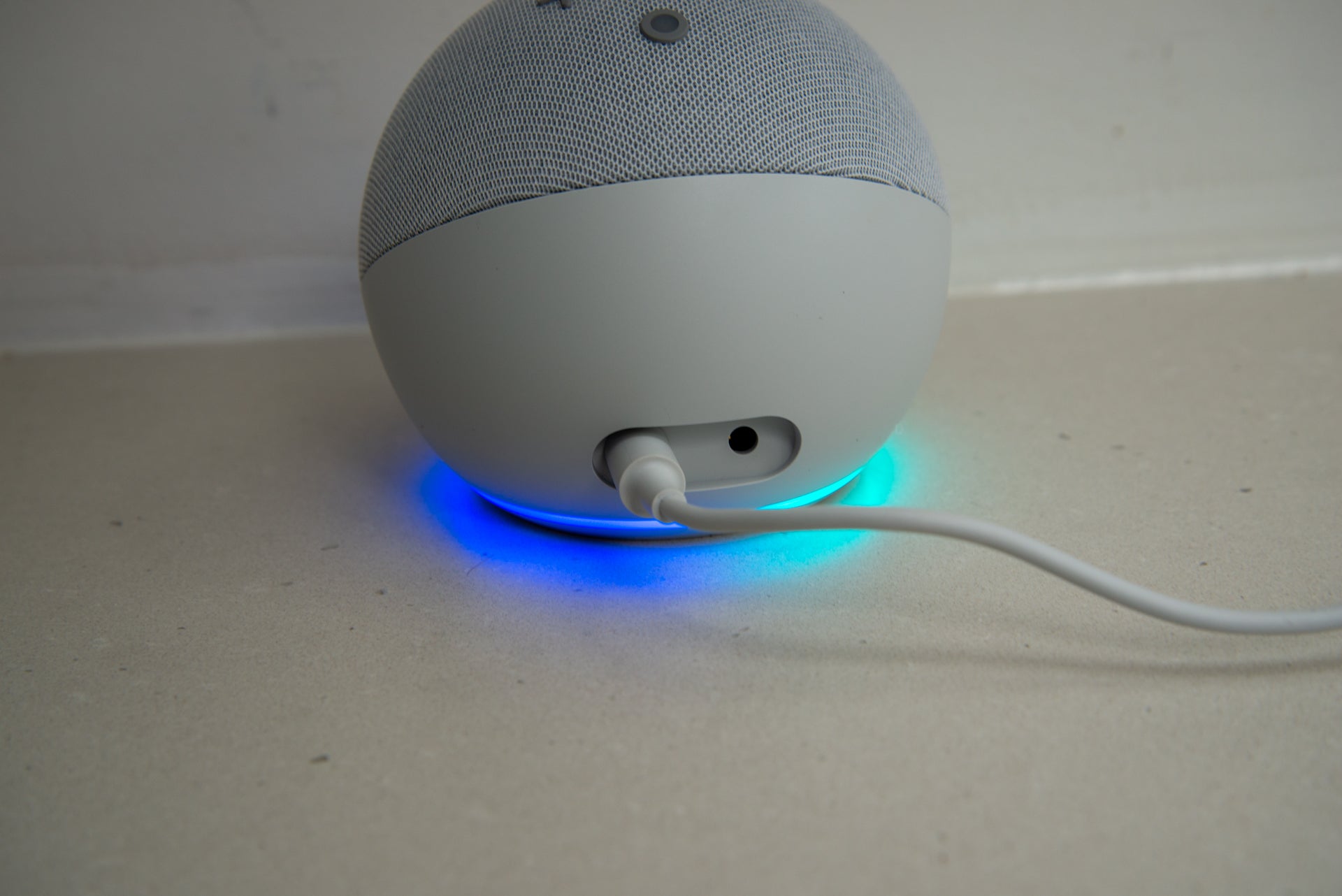 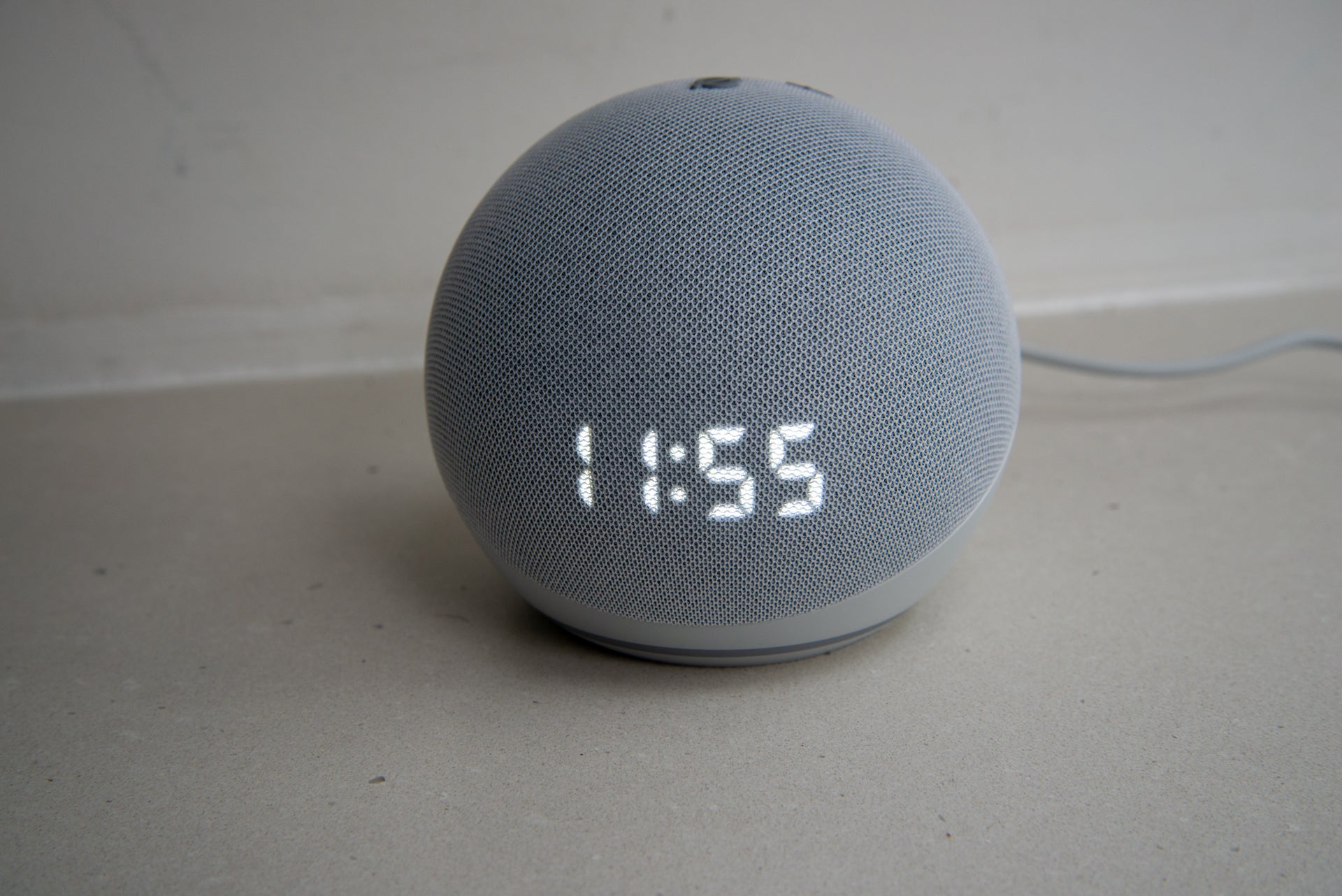 Amazon has shifted the light ring to the bottom of the speaker, making it shine down rather than up into the air, which is a subtle but useful improvement.

Alexa-wise, there’s nothing that the Echo Dot with Clock can do that the Echo Dot can’t. My guide to Amazon Alexa covers this in more detail, but suffice to say that Alexa is pretty good at day-to-day queries, and pulls ahead of the Google Assistant when it comes to smart home control, particularly for Amazon Alexa Routines.

Differences come when you start to use the display. By default, the Echo Dot with Clock shows the current time, and you can either use the ambient light sensor to adjust brightness or set a level using your voice or the app. You can turn the display off, too, which might be useful for sleeping. 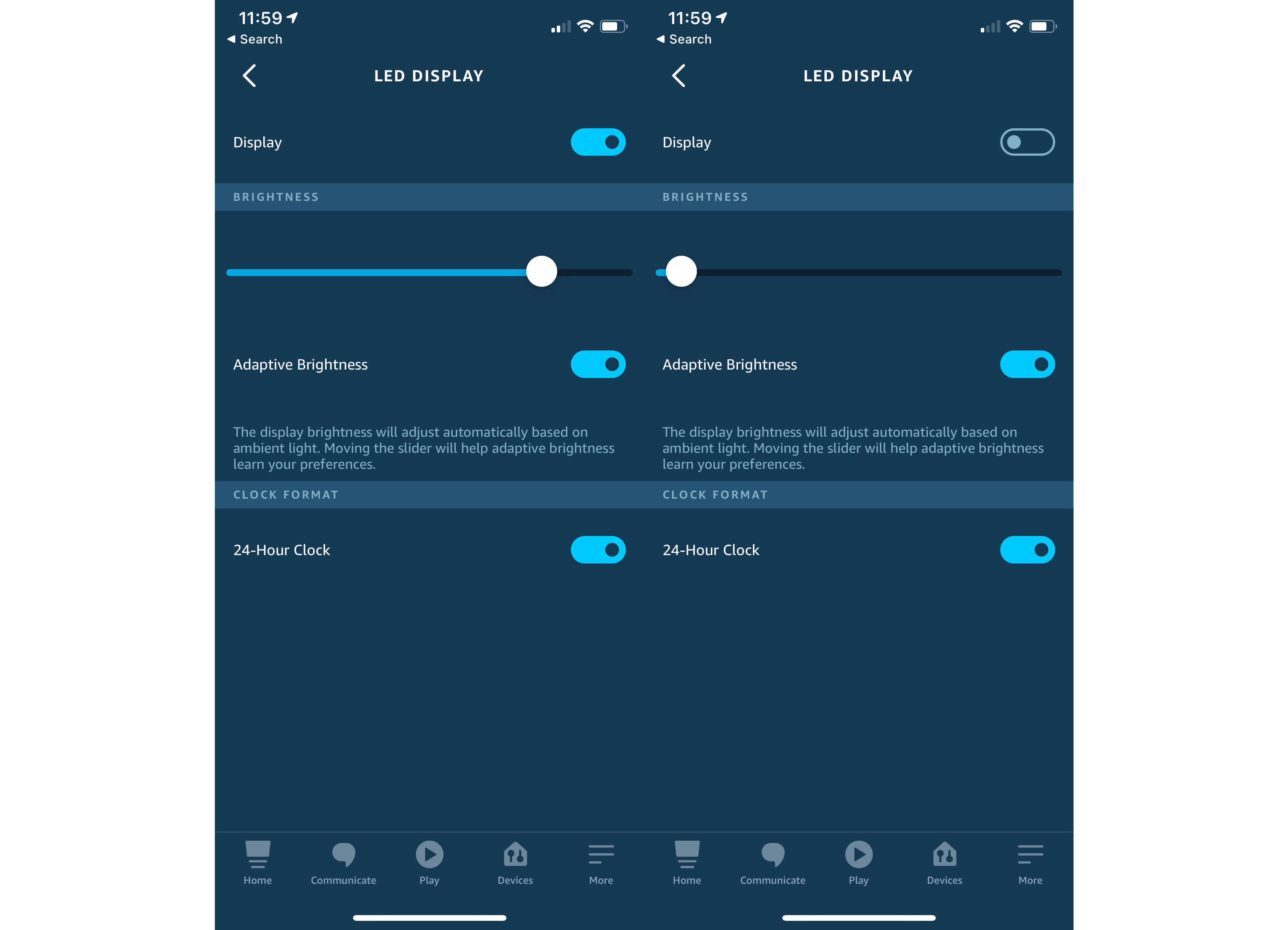 As well as showing the time, the screen shows you timers (those less than an hour are shown as a countdown; those over just put a ‘.’ on-screen at the top to show you that a timer is active). Set an alarm, and you get another ‘.’ on the screen (the lower one). 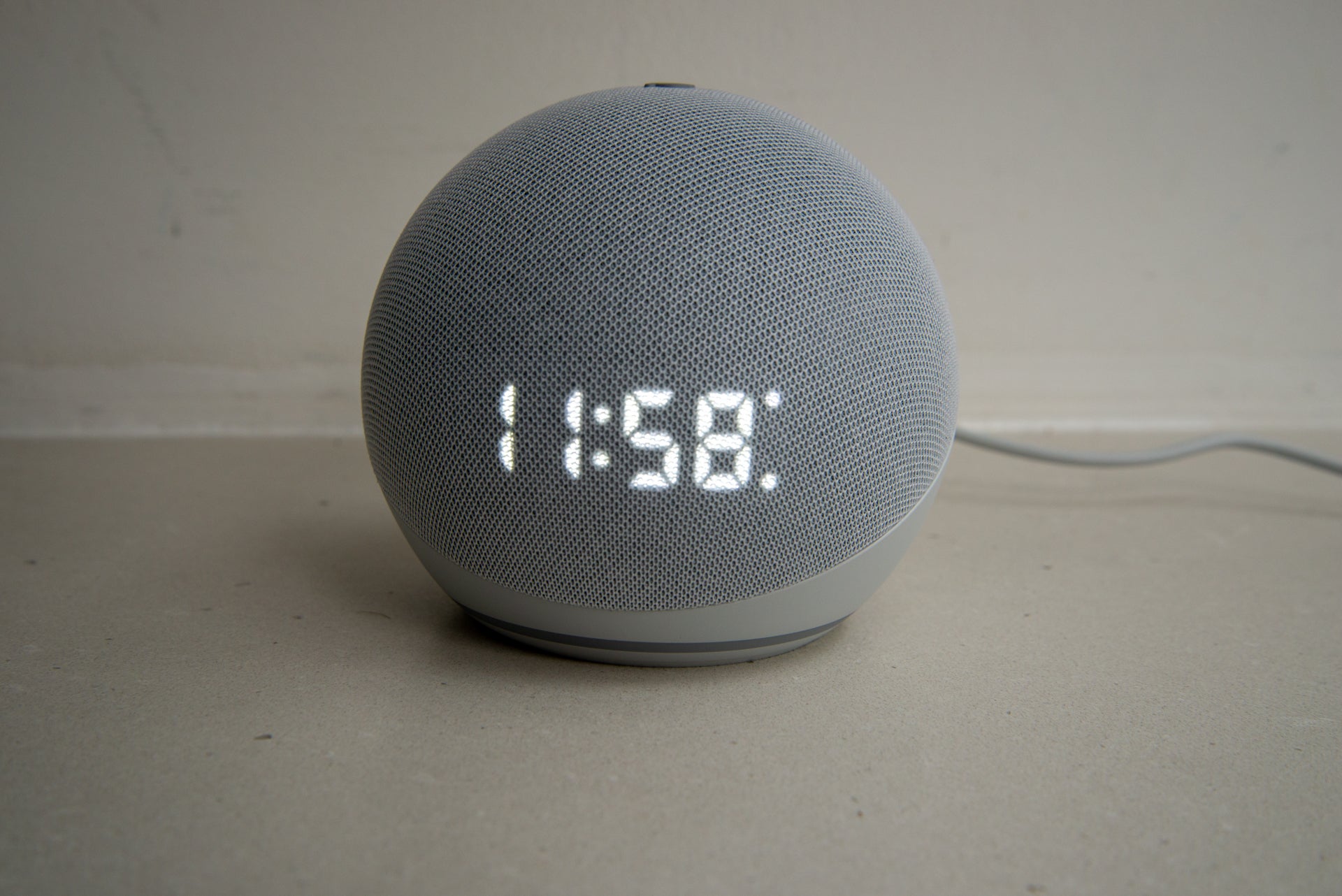 Ask for the weather and you’ll see the current temperature on the screen but nothing else. Adjust volume and you can see the level on the screen, as well as referring to the light ring (it gets more complete the higher the volume). 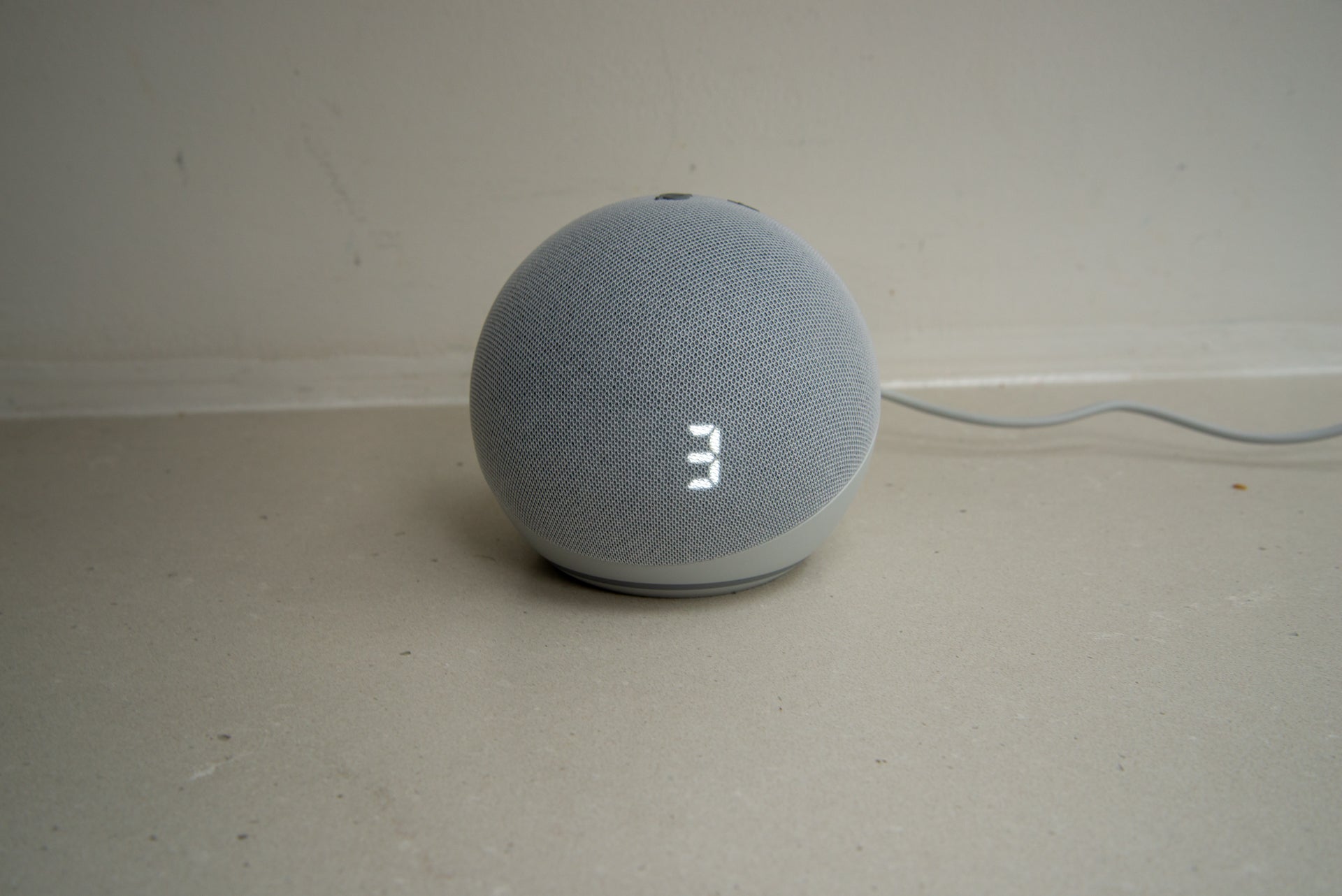 These are all nice little touches and if you want a simple bedside clock, rather than having a Smart Display, such as the Echo Show 5, or a clock on a desk or in your kitchen, the Echo Dot with Clock is a great choice.

There’s Low Power mode on this device, too, although hefty restrictions, such as linking Spotify to your account, having an active Notification or using the 3.5mm audio output will mean that this won’t work. Amazon needs to work on improving this mode.

With the 1.6-inch forward-facing speaker, the Echo dot with Clock (4th Generation) has the same audio quality as the regular Echo Dot. That’s to say, that pushing sound forwards, rather than up, makes it clearer and easier to understand than on the previous-generation model.

For talk radio, podcasts and general Alexa replies, the Echo dot with Clock is loud and clear, with rich audio. Certainly, you won’t need another speaker here.

Music is alright, with the speaker avoiding distortion at higher volumes, but the mid-range can sound muddled and bass lacks that deep thump. You’re alright for a bit of music, but if you listen a lot, you’ll want a different speaker entirely.

Should you buy the Amazon Echo Dot with Clock (4th Generation)?

If you could use a clock but don’t want to upgrade to a smart display, then the Echo Dot with Clock is well worth the extra £10 over the regular Echo Dot (4th Generation). If you’ve got the original Dot with Clock, then there’s not enough reason to upgrade, but if you’re making a new purchase, this is the model to buy.