A neat and functional way of adding Alexa to your car, the Amazon Echo Auto is a way of expanding the voice assistant's reach. While it's a useful tool for music and radio playback, the system is a little limited on iPhone, requiring frequent screen taps; Android performance is much better. Both systems are too reliant on an internet connection and there are times when driving where Alexa can't connect.

Amazon has made it possible to kit your home with every possible conceivable shape and size of Echo device. Now, you can take Alexa into your car with the Amazon Echo Auto.

It’s effectively a Bluetooth microphone that connects to your phone that’s designed to make it easier to communicate with the Alexa app on your smartphone.. It’s an awesome idea, but the in-car experience largely depends on the type of device you’re using, with Android providing the better experience.

The Amazon Echo Auto looks and feels a bit like the Amazon Echo Input: the smart speaker designed to upgrade your existing dumb speakers. It’s a small (85 x 47 x 13mm) device, with the usual Amazon buttons on the front: a mute button and an action button that turns on Alexa’s listening mode without having to say the wake word.

There’s a mount provided in the box, which clips onto the air vents of your car. It should fit most models, but check the link on the Amazon product page for compatibility information (I didn’t have any problems with my BMW X3). 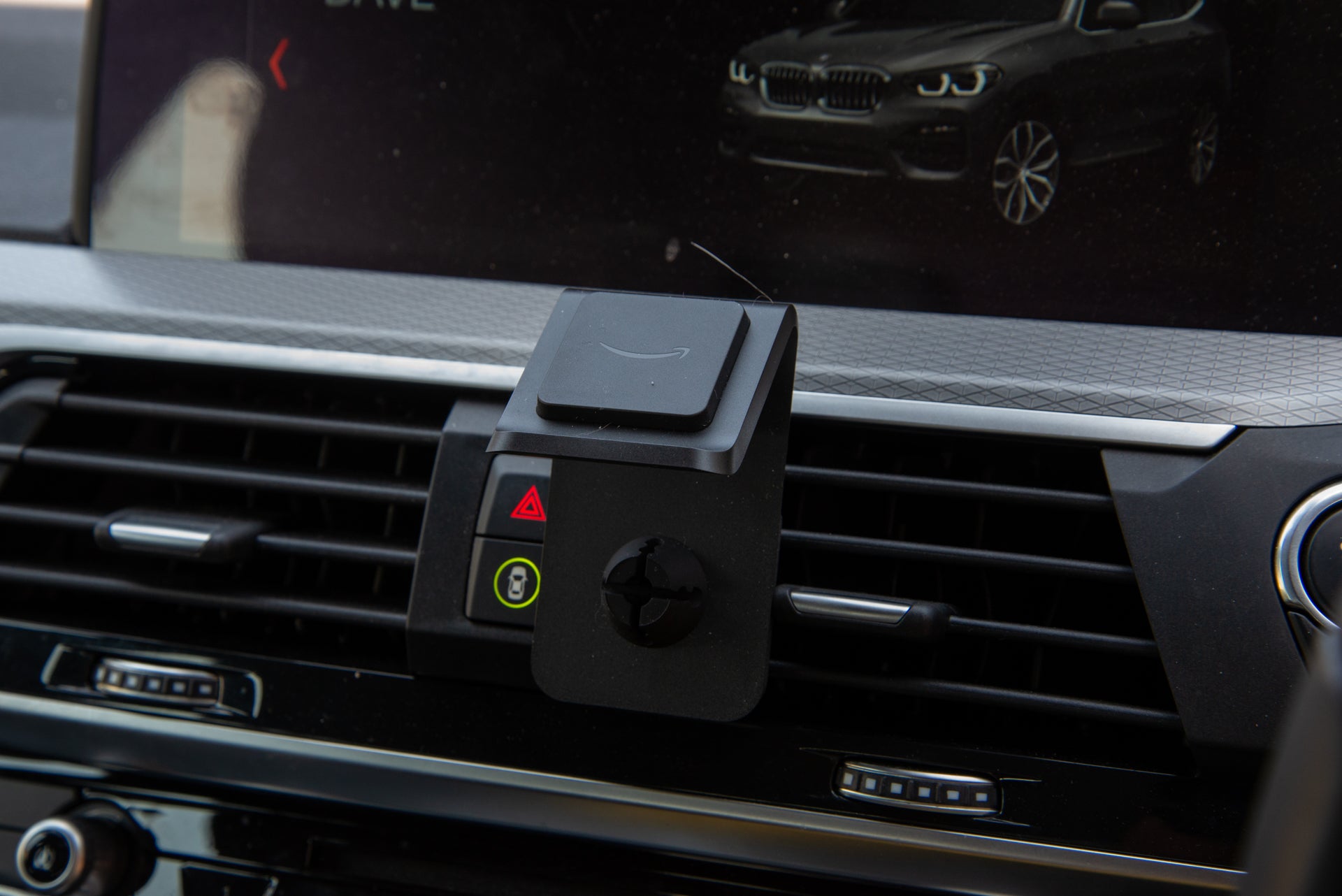 The Echo Auto magnetically clips to the mount, and is powered via a USB cable, which can be plugged into a port in your car or via the dual adaptor that connects to your car’s 12V socket. 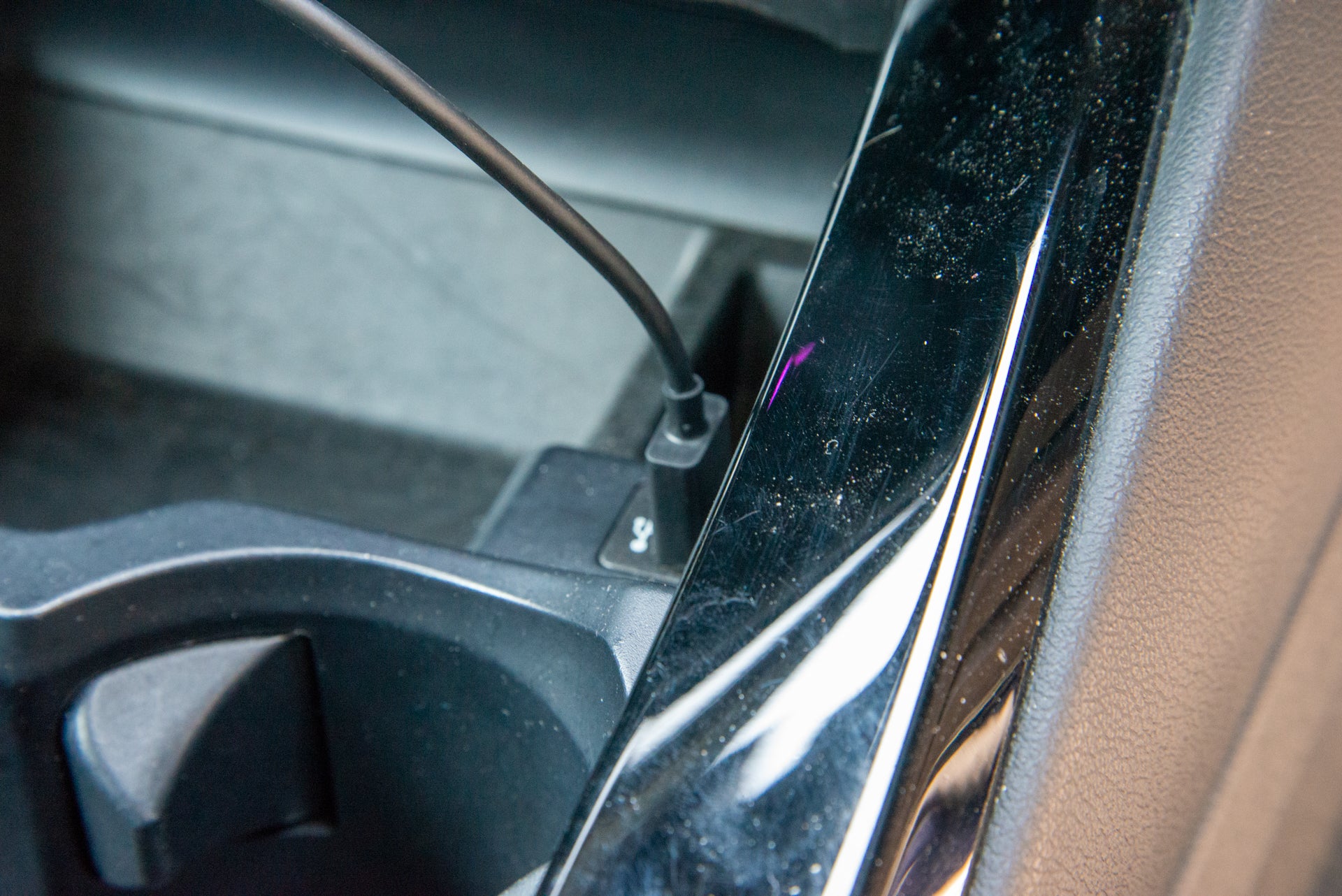 The only issue this leaves is working out what to do with the cable: third-party add-ons to cars inevitably look messy.

If you don’t have a car with Bluetooth, you can hook the Echo Auto up via its 3.5mm audio jack. You then connect via Bluetooth to the Echo Auto and all sound is sent via this connection to your car’s stereo. All-in, it should take no more than a few minutes to get the system up and running.

You can pair the Echo Auto to multiple devices, and it will connect to the first one that it finds automatically, much like a car’s in-built Bluetooth can connect to multiple handsets.

Out and about, the Echo Auto connects to the Alexa app on your phone. So, you can do all of the things that you can normally do, such as turn your lights and off remotely, find out what the weather’s like, and get answers to general questions. Thanks to the array of eight microphones, the Echo Auto is extremely good at understanding what you’re saying, working even when driving with the windows down. The only caveat is that you have to have an internet connection for Alexa to work, so drive through a mobile blackspot and you can’t do anything.

In this regard, the Echo Auto gives you the full Alexa experience that you’re used to at home. So, if you’re driving home and want to turn the heating up, you can do easily. Here in the UK, we miss out on some of the features that make the system more useful in the US, such as location-based triggers. For example, in the US you can tell Alexa to turn on your hall lights when you get home; in the UK, you can’t.

The Echo Auto is also a great tool for playing music, as you just say what you want to listen to, and the Alexa app will start to play from your default music service, such as Spotify. For older cars without Bluetooth, but with a 3.5mm audio input, the Echo Auto acts as a handy upgrade for your car, bringing Bluetooth audio to it.

You can also make phone calls using the Echo Auto, which is another handy upgrade to an older car that doesn’t have hands-free calling. Those eight microphones come into their own for voice calls too, delivering crystal-clear audio to the person you’re calling.

Other features massively vary depending on whether you’re using iOS or Android. I’ll start with iOS, which has a few flaws. Ask where the nearest petrol station is, for example, and Alexa just gives you back a list of names, distances and the roads that they’re on. Alexa says that you can say things like, “Take me to the first one”, only if you do the voice response comes back, “Sorry, I don’t know that one.”

You can ask for directions to a specific location, but the response came back saying that I had to tap the notification on my iPhone. When I tapped the notification, I had to unlock my iPhone, which then launched the Maps app with the direction turned on. This isn’t something that you can do while driving, but if you have to stop to do this, you may as well fire up the map manually and do the job yourself. This is an issue with Apple not letting third-party apps launch the native maps application when the phone is locked but, regardless of where fault lies, this problem gets in the way of a smooth in-car experience. With iOS you can’t send text messages, either, as there’s no integration with the native messaging app.

Switch to Android and things are better. If you ask for the nearest petrol station, for example, you get the same list of options but asking Alexa to go to the first one works. And, ask for any directions and Alexa is capable of firing up the Google Maps app even if your phone is locked. You can also ask Alexa to send text messages, too.

The difference in ability is stark: while using an iOS phone gives you basic features, having to tap the screen for directions is a pain; using Android, the experience is far more seamless.

Should I buy the Amazon Echo Auto?

A neat, and fairly cheap accessory, the Echo Auto makes using Alexa in your car easier. Its farfield microphones are excellent, picking up voice instructions clearly, even with the windows down and the wind rushing around. Whether or not this is the right product for you depends largely on the type of device and the car you have.

If you have a newer car with Apple CarPlay or Android Auto, then the integration is deeper and easier and you’re better off using this. Some other cars, such as my X3, also allow you to activate Siri or Google Assistant by pressing and holding the microphone button, which is a touch neater in practice for many people.

That’s not to say that the Echo Auto doesn’t have its place. If you really want Alexa in the car, and want to control your smart devices as you move, then it’s a great addition. And, it’s a great tool for controlling music, too, particularly on older cars: in many cases, the Echo Auto is a great Bluetooth upgrade for a basic vehicle.

If you’re after a bit more and want to navigation instructions to be shown on your phone, then the handset you have makes a massive difference. Currently, iOS is far more limited than Android, requiring screen taps if your handset is locked. With Android, you get better integration with native apps and you can send and receive text messages, too.

If you have the right type of phone and have the right use for the Amazon Echo Auto, it’s a great upgrade for your car, but it’s not going to suit everyone.