For real flight fans, there’s been only one series that has delivered an authentic and, more importantly, entertaining take on air combat in recent decades, and that’s Namco’s Ace Combat. The sixth edition in the series, Fires of Liberation, was arguably its pinnacle, but that hit the shop shelves more than eight years ago now and, though many have tried, few games have come anywhere close to replicating the dogfights and the missile attacks Ace Combat made its signature.

Although you’ll have to heed warnings about the game’s early day bugs found in version 1.0, from the moment you start up AllianceAtWar it feels like an experiment to recapture the spirit of Namco’s legendary series. Albeit in a form that touches on wars past and imagined battles to come.

The aim across all encounters across all stages is the same: fly your craft with precision and take down any enemy targets you encounter, whether as a means to downing an enemy fleet or protecting your own. 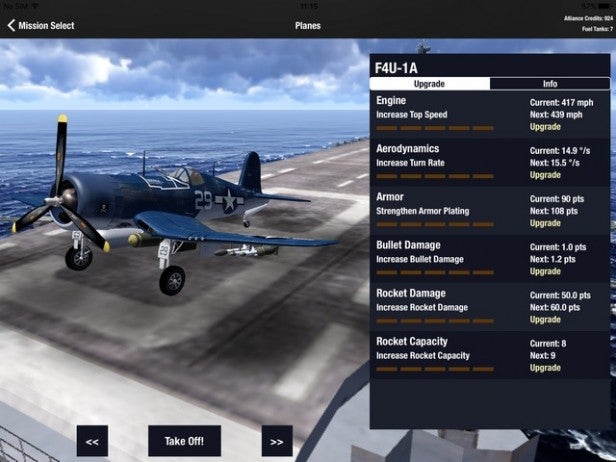 Controls are especially simple (the one hurdle most flight simulations of any kind trip up on being equipping players with a control set up that makes it impossible to fly with any authority), with the default set up favouring a one touch approach.

Essentially, wherever you place your thumb the game places a virtual thumbstick, with the flight of your plane corresponding with whatever direction you tip your thumb.

Weapons in your arsenal are placed on the bottom right of the screen, with tapping missiles enough to deploy them. Missiles quickly deplete, of course, though AllianceAirWar quickly replenishes your stock if you wait a few moments.

The machine gun, of course, requires a constant press, and doesn’t lock on like missiles do, meaning you’ll have to line up perfectly with your enemy in order to inflict significant damage.

The whole process, however, is a relatively smooth one, with AllianceAirWar not over populated with combatants, but rather sprinkled with foe almost waiting around for you to take them out. 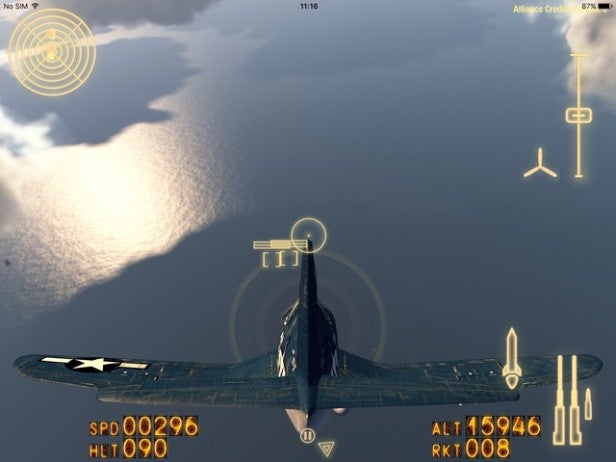 Indeed, the experience doesn’t actually change all too much from era to era. As things stand, AllianceAirWar lets you take part in missions during the Pacific Campaign in the Second World War, or a future Bering Strait combat set just a few years in the future in 2019. Further eras are set to come, but in version 1.0 the developer has understandably kept its ambitions in check.

However, within these two wars, there are five types of mission you can take on: a standard dogfight; a mission to take down an enemy fleet both in the ocean and up in the sky; a mission to defend your own fleet from a similar assault; a game of ‘attack the ace’ where an ‘experimental craft’ takes to the air and its your task to destroy it; and an assassination mission, where blowing up numerous VIP targets is the order of the day.

All of the above missions take place over water – presumably a move that enabled Art of the State to hold back from creating elaborate landscapes below your wings – and all involve following on screen prompts in order to locate and destroy numerous targets. This is arguably AllianceAtWar’s Achilles Heel.

Aside from the odd visual bug and the occasional glitch at the end of an unsuccessful mission, AllianceAirWar doesn’t get anything wrong, but at the same time it all feels rather vanilla. 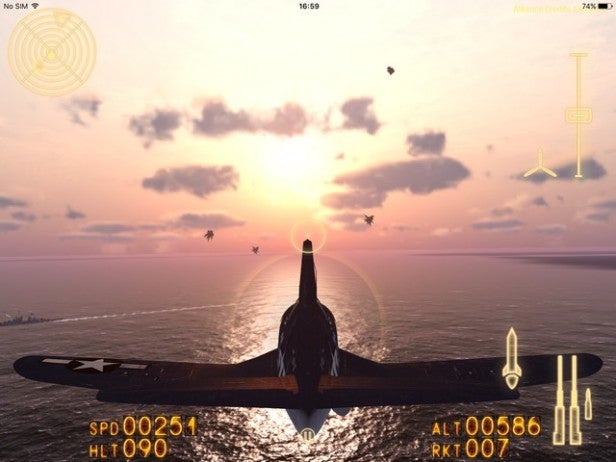 It’s as if Art of the State has laid the foundations for a much bigger game to come. There’s nothing really here to complain about, but at the same time, there’s little here to get excited about either.

Nevertheless, when dodgy controls are the mainstay of most flight simulators, the fact AllianceAirWar nails this with its first attempt is a significant feather in the developer’s cap, and suggests, when all the missions have been unlocked, this will be quite the war sim. As such, it might be advised to get to grips with AllianceAirWar now while things are relatively simple so your arsenal is fully stocked by the time the real conflict breaks out.

Verdict
Intentionally simple, AllianceAirWar’s two conflict zones don’t exactly set the pulse racing as things stand, but adept controls and hints at more exciting eras of war to come suggest this could set a new benchmark for modern air warfare games in the years ahead.