The Russell Hobbs 19720 Pump is a low-cost espresso machine. Available for under £50, it’s in the impulse buy price range for many.

It’ll do the job as an occasional-use espresso machine, perhaps one for a coffee addict’s study, but it proves the old cliche about getting what you pay for. Fiddly operation and some issues with coffee quality mean it doesn’t quite deserve the spotlight in most kitchens if it’s to be used daily. 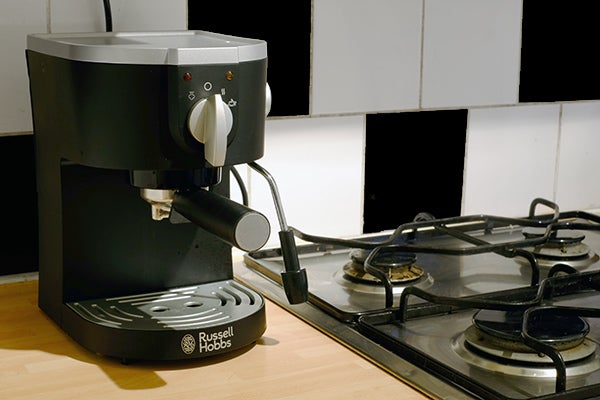 The Russell Hobbs 19720 Pump is a very small espresso maker. Its curves and two-tone design give it a similar visual character to larger, more stylish and expensive models, but this one is tiny.

There are pros and cons to this. On the plus side, it’s easy to fit in kitchens with small work surfaces. And for those totally non-food-related rooms that are begging for a coffee maker? The Russell Hobbs 19720 Pump wouldn’t be the worst way to class up a guest bedroom. 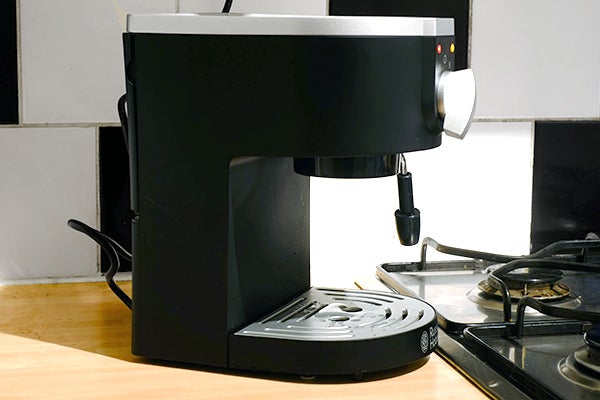 The issue we have with the size is that it makes preparing long drinks more or less impossible. You can only really fit espresso cups under the coffee holder: ordinary mugs just won’t fit. This is bad news if you drink Americanos rather than espressos as a way to ensure you don’t end up a jittery mess by early afternoon.

Other elements of the Russell Hobbs 19720 Pump are miniaturised too.

The reservoir is tiny, holding just 0.8l. That’s about half the capacity of most other espresso makers, meaning you’ll need to refill it fairly regularly. Doing so is not that convenient either.

Rather than having a front-loaded reservoir like most machines, the Russell Hobbs 19720 Pump’s reservoir pokes out of the back, behind a thin plastic pull-off cover. It feels as though you’re breaking into the body, not helped by the feed – the tube that sucks the water in – just dangling into the reservoir. 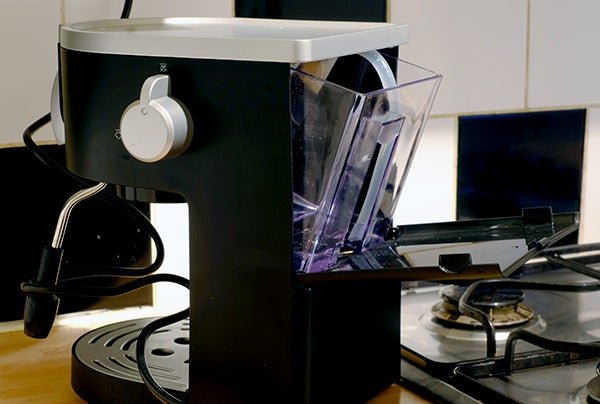 While you can just angle the reservoir out and fill it up using a glass, it’s fiddly and means the Russell Hobbs 19720 Pump needs to be moved away from a wall during refilling, losing it some of the brownie points it gained by being so dinky.

These are points we’d normally cover later in a review but they are fundamental to the Russell Hobbs 19720 Pump. It’s bordering on being a ‘portable’ espresso machine in its design – not that it is one, as you still need to attach a power cable. 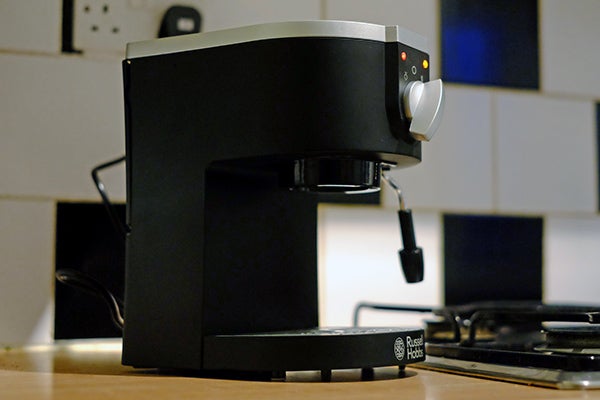 As is to be expected of a budget model, though, build quality is basic. Everything apart from the coffee holder, the part of the body it hooks into and the steam arm/frother is plastic.

The Russell Hobbs 19720 Pump feels light, and quite cheap if we are to be ruthless. Machines up to four times the price are often mostly-plastic, but the flimsiness of the back panel – which will have to be removed and re-set daily for coffee fans – is a too-obvious reminder about how cheap the set is.

As a espresso maker with few fancy extras, there’s not a great deal to learn here in terms of operation. There’s a single primary control knob on the front, used to make the Russell Hobbs 19720 Pump output coffee as well as to let it prep hot water and steam.

If anything, there’s arguably a superfluous setting on this dial. Turning to the left prepares steam, while the two settings to the right kick-start hot water prep/warm the top plate and then finally make the coffee itself. With needing steam without water a rarity, the Russell Hobbs 19720 Pump seems like it might as well have simply ‘prepare’ and ‘produce’ settings here. 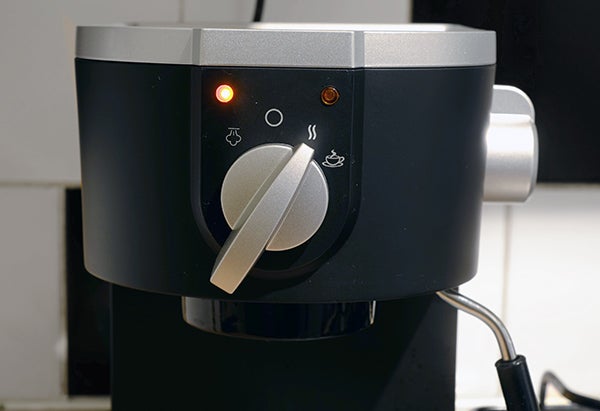 You see, the actual frother control is on the side. The front dial doesn’t operate it — a big separate plastic knob turns it on and off. It seems the Russell Hobbs 19720’s steam pump may be on the weak side, because it takes a little while to get up to full output than usual. The most important limitation here, though, is that the frother cannot be used to output hot water, just steam.

Not only can you not fit an Americano style mug under the coffee holder, you’ll need to have a kettle on hand to top up the level anyway to produce long drinks. Alternatively, you can let the hot water continue to dribble through spent grounds, but you will get better results with a more versatile machine. 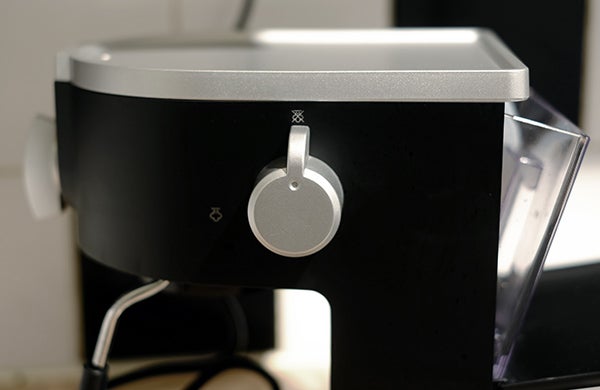 The noise the Russell Hobbs 19720 Pump makes in use is also quite grating. Owing to a combo of a (seemingly) low-power pump and light body construction, the noise it produces is relatively high-pitched and harsh. Most espresso machines are fairly loud, but the higher pitch makes the noise more offensive than most.

We also noted a few other issues. The Russell Hobbs 19720 Pump leaves lots of excess water in its coffee holder once you’ve made a drink, because the pressure of the water alone isn’t enough to force it through the coffee filter. It makes cleaning up between espressos a messy business, unless you’re extra-careful.

As with the one-step-up Allure model, there are two coffee filters, designed to hold one or two measures of coffee. A coffee spoon comes in the box, whose other end acts as a tamper — the tool used to compress coffee grounds in the holder before it is put into the machine. 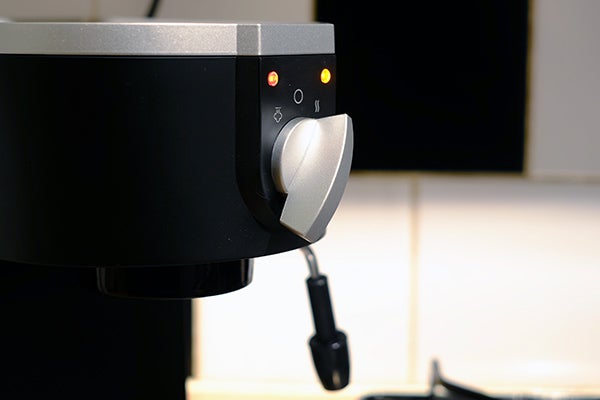 The Russell Hobbs 19720 Pump has plenty of problems, and some of these show through in the results. Despite having a 15-bar pump, we get the feeling its internals just aren’t as powerful as slightly more expensive models.

It has a habit of outputting lukewarm coffee on occasion. This depends on how long it has been on for, as it is certainly capable of producing hot coffee – it just doesn’t always, every time. It’s likely to be more of an issue for those looking for the Russell Hobbs 19720 Pump to provide a quick cup of coffee on a morning, with the least fuss possible involved. As noted earlier, the frother too is somewhat weak. 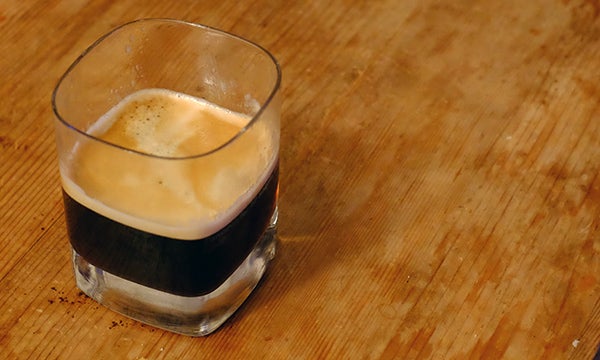 Going ‘from cold’ your coffee will often be a little tepid

With these sorts of issue in tow, we’re dangerously close to territory where you might get better results from a good cafetiere – for those wanting ‘normal’ coffee at any rate, rather than a latte.

However, we can’t ignore that the Russell Hobbs 19720 Pump does produce coffee with the sort of crema layer you don’t get from a cafetiere. It’s a little thin and pale compared with the best coffee machines, but then we don’t expect a £50 espresso machine to match one 4-5 times the price. 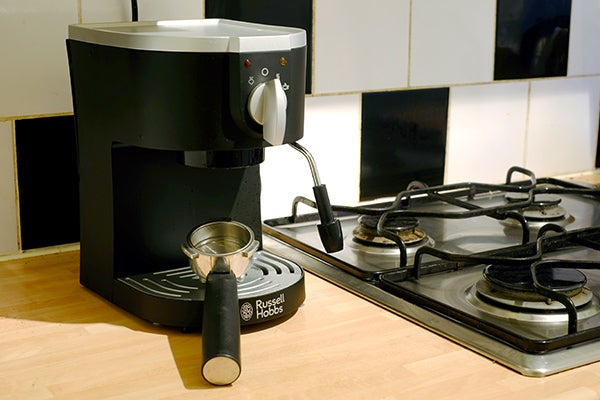 The Russell Hobbs 19720 Pump is a small, cheap espresso machine that can produce good coffee once you’re used to its quirks. However, there are quite a lot of them, enough to put off a good chunk of the audience who might be attracted to a simple, affordable coffee maker.

Its reservoir is fiddly, the water-retaining filters are a pain, the too-low coffee holder is limiting, and that it can’t output hot water on its own is a serious limiting factor. Plus, the noise it makes really isn’t kind on the ears. We had hoped the Russell Hobbs 19720 would offer a shrunk-down version of the espresso blueprint we’ve very familiar with, but it is cut down in features and performance as well as size.

Many of you may be better off with a pod machine or cafetiere if you can’t spend any more, although you can get good results here if you learn to work within the thing’s limitations.

It’s cheap, compact and cheerful, but the small size and limited performance come with a few frustrations of their own.