As if it wasn’t obvious from its make-up style case that the OT-810 is aimed at teenage girls, then the fact that Carphone Warehouse is offering the phone with a redeemable voucher for Barry M lip-gloss (from Superdrug) should hammer the point home. It’s not like the handset is expensive either, as it can be picked up on PAYG for just £50, so is it an ideal choice as a gift for daughters or nieces this Christmas?

What sets this phone apart from the competition is definitely its cutesy design. Rather than opting for a traditional candy-bar shape, or even the messaging phone styling of the OT-799 that we looked at recently, Alcatel has instead used a clamshell design that’s obviously been styled to look much like a blusher case.

When closed, the front has a mirrored finish with a 2.0megapixel camera peeping out of one corner. Flip open the phone and you’ll find that the mirrored look is continued on the bezel around the screen, while the QWERTY keyboard that sits beneath it has a matte white look, but is surrounded by glossy plastic, which is also used on the battery cover on the rear.

Another interesting feature of the design is the small LED matrix that’s hidden behind the mirrored finish on the front and lights up to show different symbols and alerts. For example, when the phone is charging it shows a battery icon gradually being filled up with juice, whereas when you’ve got an unread text message it shows an unopened envelope icon with a question mark over it. It’s a neat and stylish touch on such a cheap handset.

On the bottom right-hand corner you’ll find a standard microUSB jack that’s used for both charging the handset using the supplied wall charger or syncing it with a PC to transfer music tracks, photos and other files. The opposite corner houses a standard 3.5mm headphone jack.

Removing the cover on the rear reveals the battery and under this you’ll find the microSD card slot, meaning you can’t hotswap microSD cards. The phone only has 50MB of memory onboard, so if you want to make serious use of the MP3 player you will have to buy a microSD cards as there is none supplied in the box, though this is hardly surprising given its low price tag. Cards of up to 16GB are supported and these are pretty cheap these days being available online for as little as £9.

The Alcatel OT-810’s 2.4in screen is actually reasonably large and has a fairly decent resolution of 320×240 pixels. It’s not a touchscreen so you control most of the phone menus using the four way navigation button, along with the two soft keys that are positioned directly beneath the display. The screen is bright though, and colours look rich and vivid, especially by budget phone standards. This helps to make reading web pages or email messages that little bit easier.

As this handset is heavily focused on messaging and social networking, it’s no surprise to find that it has a full Qwerty keyboard. The layout of the keyboard is good as Alcatel has placed common punctuation marks, such as fullstop, comma and the ‘@’ symbol on their own dedicated keys rather than forcing you to use the Alt button to access them. The keys are gently curved into a very slight peak, but we found them a little bit on the small side. However, as the phone is obviously aimed at teenagers, it’s probably appropriate for the target market. 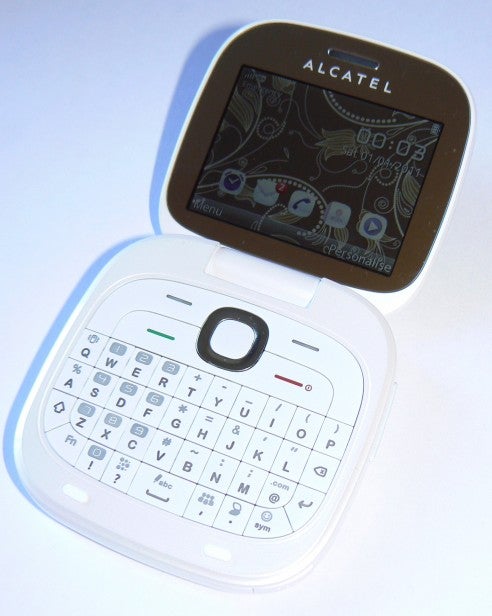 Alcatel has done a pretty good job on the phone’s user interface. As well as showing the time and date, signal level and icons for unread emails or text messages, the home screen also displays a row of five shortcuts (or widgets as they’re perhaps over-generously referred to by Alcatel) ranged across the bottom of the screen. These are customisable and can point to stuff like the apps for text messaging, email, calendar, music and camera, amongst others.

In the main menu you’ll find the web browser. There are actually two of them. The standard browser is desperately slow to load and render pages, partly because the phone only supports GPRS data speeds. However, Alcatel has also loaded Opera Mini which is much faster to use and provides a vastly superior browsing experience, although page navigation is still a bit tricky due to the phone’s reliance on the clickable D-pad. 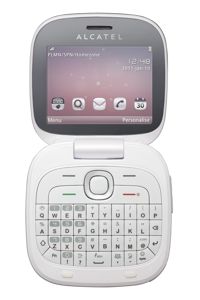 The OT-810 also has Java apps for accessing Facebook and Twitter, along with an RSS news reader and Weather app that draws its data from the Accuweather service. The onboard music play is a bit basic, but gets the job done and the phone also has an FM tuner onboard, which is handy. Add in an eBook reader app, voice recorder and basic video viewer and you’ve got a fairly useful line-up of apps to choose from.

When it comes to the camera things are more basic, though. The 2.0megapixel shooter doesn’t have an LED flash and is fixed focus only. Perhaps unsurprisingly the quality of the shots it takes vary pretty widely. In good lighting conditions photos tend to look relatively decent (as you can see below), but when faced with more demanding situations, such as a bright sky in the background it tends to over expose the sky and leave the foreground objects looking quite dark and dingy. It’s also very poor when working indoors under low light, delivering dark photos with lots of picture noise – even when you enable the night mode in the settings menu. 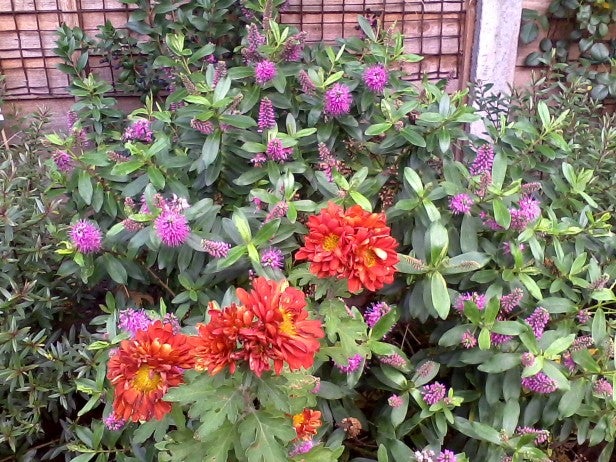 Call quality is reasonably good and the ear piece delivers loud and pretty clear audio. However, the battery life is only so-so. We only really managed to get around a day-and-a-half out of it before it needed a recharge, which is poor for a 2G phone, but perhaps not surprising given the battery’s small 850mAh capacity.

Verdict
Overall, this is cute handset form Alcatel that stands out from the crowd thanks to its unique design. It’s also got a good screen and keyboard, an easy to use menu system and some interesting social networking features. For the money, we think it’s one of the better budget messaging handsets around at the moment.