Adobe’s Premiere Elements has been the favourite consumer video-editing
application, at least on the PC platform, for some time now. But while
alternatives from
Corel and
Pinnacle haven’t noticeably leapt ahead, there is stiff competition
from
CyberLink’s increasingly accomplished PowerDirector. And so,
conforming to Adobe’s now annual cycle for its software releases, we
have version 11 of Premiere Elements. But does it do enough to see off
the challenge from CyberLink? 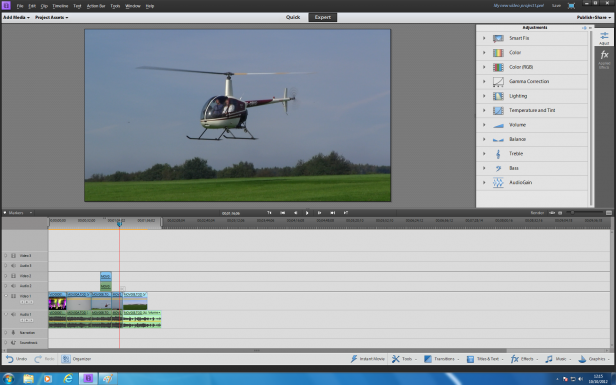 At
first glance, a lot appears to have changed. Loading the application
gives you a choice of opening the Organizer or main Editing environment,
as before, although the dialog has been completely redesigned. But
while the differences with the Organizer are relatively subtle, which we
will describe shortly, the Editor’s interface has had a major overhaul,
and now bears even less resemblance to Adobe’s professional Premiere
Pro, from which it was originally derived.

There are two modes,
which correspond to the storyboard (or sceneline) and timeline modes
found in most consumer-grade video-editing applications, including
previous versions of Premiere Elements, just with some differences. In
Quick mode, your clips are positioned sequentially. Unlike many
storyboard implementations, the width of the pictorial representation on
the timeline indicates duration visually as well, with wider pictures
being longer and the lion’s share of the screen is taken up by the video
preview.

Expert Mode reveals the more familiar multi-layer
timeline, but the slightly smaller preview window still takes up more
than the top half of the screen. The traditional source and programme
dual preview workspace is conspicuous by its absence, as is the media
and effects bin that took up the right-hand third of the interface in
the previous version. So, the focus is on how the end result looks,
rather than the process of getting there.

Further accentuating
this, whichever view you are using, the various tools and effects
categories are subtly positioned around the edges of the main window as
icons. On the right can be found icons for adjustments and tweaking the
settings on your special effects. The adjustments include adjusting
colour by hue, lightness, saturation and vibrance, with automatic
options. You can also adjust via red, green and blue channels, as well
as gamma, lighting, temperature and tinge, for a relatively
comprehensive range of tweaking tools. However, configuring these
settings involves clicking an icon within a grid of nine icons
corresponding to less or more of the parameter in question. This is a
good visual way of working for novices, but seasoned video editors will
long for standard sliders with a little more fine precision, and these
are hidden behind a ‘More’ option that reveals them. The audio controls
can also be found here, and use regular sliders. 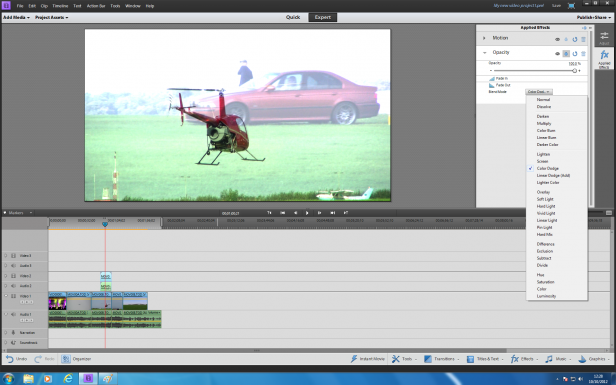 Access
to transitions, graphics overlays, titling and other text effects can
be found along the bottom, alongside the filter effects, although once
applied they are accessed via the ‘Applied Effects’ icon on the right.
The special effects are essentially the visual filters of previous
versions, although there are some new additions. In particular, a
selection of new FilmLooks filters from NewBlue has been added. This
includes Pandora, Old Film and Red Noir. Blending modes are now
supported when you layer clips or still images, giving you the ability
to mix video in more sophisticated ways than just by varying the overall
opacity level. This option can be found beneath the ‘Opacity’ slider.
You can also call up the ‘Instant Movie’ system via an icon on the
bottom edge, and this has a few more themes than before.

The incredibly powerful time remapping feature from Adobe Premiere Pro has now made its way to Elements, although it’s operated in a rather different way. First, you create time zones within your clip, and adjust their length using handles. You can then apply a speed change just to this region, either faster playback or slow motion, and only this section will be affected. There is less detailed control here than the Premiere Pro version, but conversely the latter could take a few attempts to get right, whereas the more limited options in Premiere Elements render it much easier to use overall, making you more likely to use it in the first place. 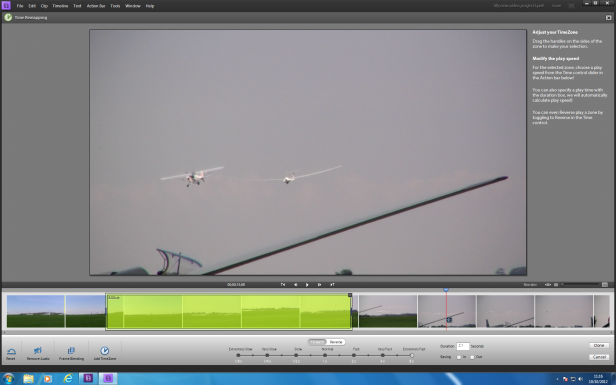 Getting back to the Organizer, this now has new categories along the top of the interface.  These are for Media, People, Places and Events. People mode will detect faces in your footage and give you the option to label them with the correct names, allowing you to find clips with specific family members or friends within them. The Places category allows you to drag groups of videos to a spot on Google Maps and assign them to a location, meaning you can then find clips with specific location characteristics. You can also tag your clips by event, so they will be grouped in this way within the Events category. These categories are particularly useful for grouping clips and photos from different devices. The various possible tasks available within the Organizer are now represented by bigger, clearer icons – a minor but welcome enhancement. At the output stage you can now share your videos directly to Vimeo, as well as YouTube and Facebook, either from the Organizer or straight from the editing timeline. 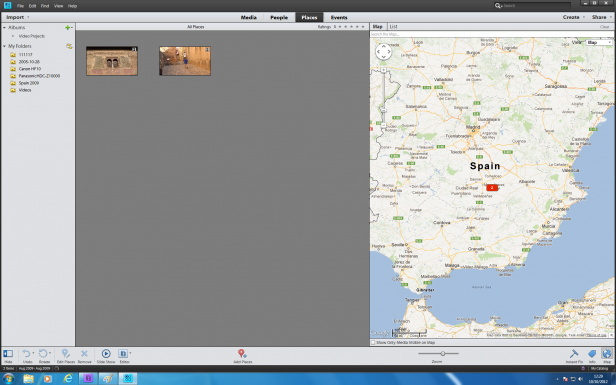 As with the last version of Premiere Elements, the application is available in 32-bit and 64-bit versions on Windows. However, to get the most fluid editing you need the 64-bit version, as the underlying Mercury Playback Engine borrowed from Adobe Premiere Pro is 64-bit only. Mac users only have the 64-bit option, but this is not such an issue as MacOS versions 10.6 onwards are supported, so long as your Mac has a multi-core 64-bit Intel chip.

Existing users of Premiere Elements will find the new interface a bit of a shock, although all the same powerful features are still available underneath. However, support for 3D is still conspicuous by its absence and some competitors have caught up in many areas. In particular, CyberLink’s PowerDirector 11 has similarly powerful layering and effect keyframing abilities, plus the video compositing and audio features of its new helper applications. So while Adobe Premiere Elements 11 remains a very capable video-editing application, and its revamped interface will make it easier for newcomers to get to grips with, the clear lead it once had over the competition has been noticeably eroded.