Adobe Premiere Pro has received a dual boost over the last couple of years. First came the CS5 and 5.5 releases with their new powerful 64-bit Mercury Playback Engine that provides true real-time editing performance. But at the same time, Apple has kindly made a significant portion of the market up for grabs, as the professionally-oriented Final Cut Pro was phased out, to be replaced by the much more “pro-sumer” Final Cut X. These two factors together have meant that Premiere Pro has made huge inroads where Final Cut – and Avid Media Composer – used to reign supreme. Into this context comes the latest CS6 update of Premiere Pro, which doesn’t focus on cloud-based features as much as https://www.trustedreviews.com/adobe-photoshop-touch_Mobile-App_review Adobe’s Photoshop Touch, but has plenty to offer of its very own.

The differences from previous versions are obvious as soon as you load the application.  Before, the interface developed incrementally, with the underlying engine and features having the more significant changes. But with CS6 there is a major shift and modernisation. The changes are made a little more pronounced by the fact that the default workspace now foregrounds the source and program monitor windows, an arrangement known as “two-up” that is much more in keeping with higher-end editing platforms. But this is a slight red herring as this workspace was optionally available in previous versions, and you can switch back to the old default if you like too. Old projects will be imported with the old default workspace unless you reset them as well. 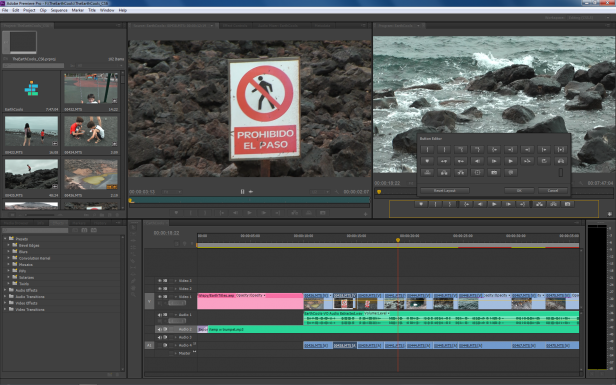 The more significant change is the tidying up of the plethora of buttons around the video windows. The jog-shuttle controls, a vestige of physical edit controllers, have been removed, so that now the buttons take up a single strip of space. You can customise the contents of this strip as well, even adding a second layer of buttons again if you wish. But you might not want to, as the aim of the “two-up” default workspace and these enhancements is to maximise the space for the video windows, which is essential as format resolution continues to rise to 4K and 5K.

If you’ve gotten used to working with the project panel in list format, there are a number of enhancements which could lure you finally to switch over to an icon view. For a start, now you can scrub through a clip preview simply by waving the pointer left and right inside its icon. If you click on the icon, a playback head marker lets you do this more precisely. Hit the appropriate keyboard shortcuts, and you can even add or edit in and out points. There are icons to show whether a clip has an audio or a video track, and hovering over these tells you whether the clip has been used in a sequence. Click on the information pop-up, and you’re taken straight to that location. 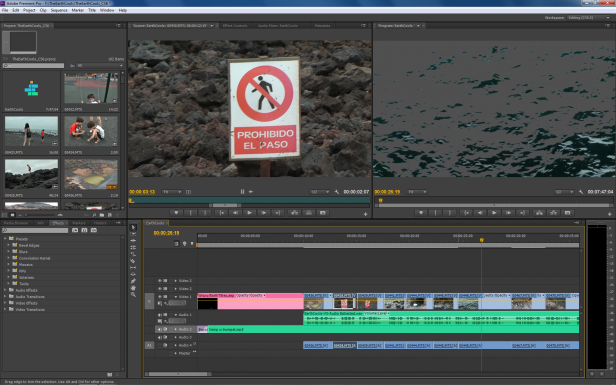 The timeline has seen some changes too. The separate scroll and zoom bars have been combined, with the latter removed from its position above the media tracks. This takes a little getting used to, if you’re familiar with the previous way of doing things, but it does make navigating through an edit with the mouse that little bit quicker. The feedback when your mouse pointer moves over the ends of clips is now much clearer than before, with bright red arrows appearing so you know precisely whether clicking will drag the left or right clip’s end point. Double-click on an effect, and it will be applied to the clip, or clips, that are currently selected on the timeline. You can now adjust effect parameters whilst a clip continues to play from the timeline, too.

There are some welcome improvements in the effects department as well. Adjustment layers have made their way across from Photoshop and After Effects, although they function in a slightly different fashion. They are added as empty clips, to which can be applied any filters desired. Place them on the timeline, and all clips beneath will be treated – handy if you want to uniformly filter a complex picture-in-picture without the complication of a nested sequence. 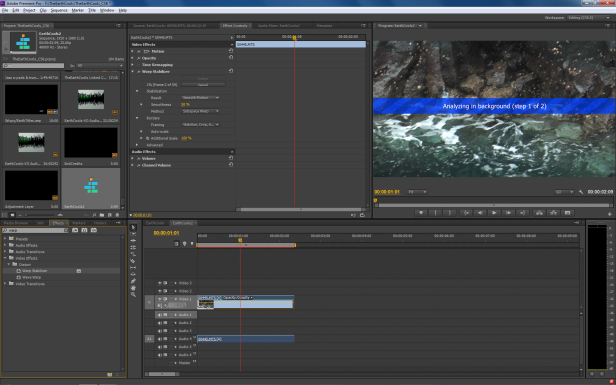 Another immigrant from After Effects is the Warp Stabilizer effect. This is a very powerful image stabilisation tool, with lots of configuration options, and even tools for reducing the effects of rolling shutter caused by the sequential scanning of CMOS sensors, or the “jellos” as they are affectionately called. There’s also a separate rolling shutter corrector, if you just want this facility on its own. The three-way colour corrector has been redesigned, too, with a Master button to gang all colour wheels together, individual wheel eyedroppers, and a general reordering to make oft-used functions easier to find.

The underlying engine hasn’t changed all that much since CS5, however. The CS6 release is still resolutely a 64-bit application, with no 32-bit option, and the GPU acceleration choices remain very limited. These are still confined primarily to NVIDIA’s professionally-oriented Quadro cards, with just a couple of consumer-grade GeForce alternatives, but NVIDIA’s Maximus dual-GPU system is now included. The other main additions here are some of AMD’s Mobile Radeons with OpenCL support, allowing GPU acceleration on MacBook Pros with the appropriate discrete graphics. 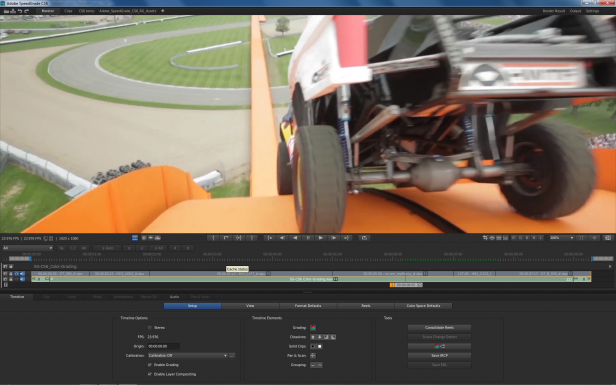 All of these enhancements are very welcome indeed, but the feature that has been garnering most attention in high-end professional circles is a new addition to the Production Bundle. Iridas’s SpeedGrade was already one of the most popular and respected grading applications, for applying primary and secondary colour layers as well as film-look effects. Adobe has purchased the company, and made some steps towards integrating SpeedGrade into its suite of video editing tools. This doesn’t yet go so far as the phenomenal integration between Premiere Pro, After Effects, Encore, and a host of other video-related products. But you can use a “Send to SpeedGrade” File menu option to output a sequence in the SpeedGrade format so you can import and work on it within the latter. 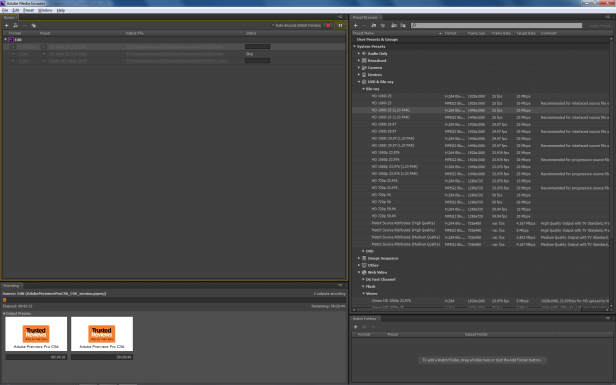 There are numerous tweaks elsewhere, as well. The Media Encoder now has a preset browser pane. You can simply drag presets from this to an existing encoding job, where they will be listed in a tree beneath, in a similar fashion to Sorensen Squeeze. You no longer need to add a new entry for each target format you wish to use. There’s native support for the latest RED, Arri Alexa and Canon Cinema EOS C300 cameras. And, just to rub salt in the Final Cut X wound, interchange formats for Final Cut Pro have been improved.

Verdict
Adobe Premiere Pro CS6 doesn’t have the headline engine change of CS5, but it’s still likely to be an essential upgrade for most users, with even more reasons to lure lovers of competitive packages over. The most common complaint about many Adobe apps has traditionally been the plethora of onscreen buttons and widgets, and Premiere Pro CS6 does a good job of cutting these back without limiting the functionality most people use. So we recommend it even more heartily as the professional video editing application of choice.