Acer’s V9800 is one of the first 4K UHD DLP home cinema projectors to land at TrustedReviews – and its a hugely exciting advert for the upstart technology.

It’s taken a while for the DLP camp to come up with a 4K projection solution. Manufacturers have had to wait for Texas Instruments to pull its finger out, which has left the running to Sony, with its UHD SXRD models, and pixel-shifting tricksters such as Epson and JVC, which have devised workarounds for their own Full HD imaging chips. But with 4K DLP now breaking cover, could the entire home projection market be heading for a shakeup? 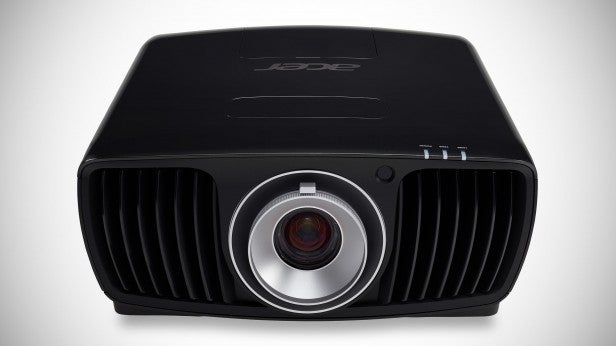 Physically, the V9800 is a big beast (563 x 471 x 216mm), and it tips the scales at a not inconsiderable 15kg. This is a dedicated home theatre projector that demands permanent installation; it isn’t a ‘weekend’ device to bring out for footy parties with your mates.

That said, it’s an attractive box. The gloss black chassis has the lens centrally located and all inputs are side-mounted. Sources can be laced up via two HDMIs and PC VGA. Only one HDMI is v2.0 HDCP 2.2-compliant, for UHD sources such as 4K Blu-ray and set-top boxes. For control, there’s a 12v trigger and RS 232. There’s also a LAN RJ-45, wired remote jack, and USB Mini B terminal. 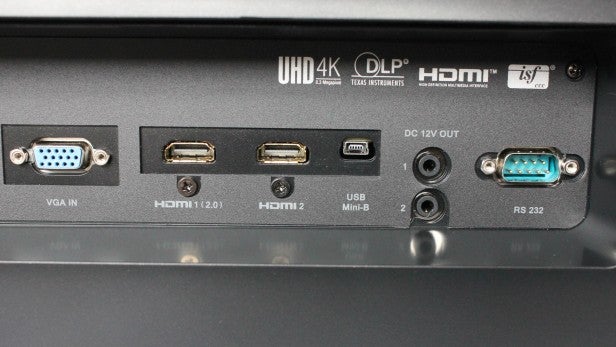 Critics might claim that this isn’t a native device as a consequence, but my eyes beg to differ. The projector can clearly resolve a 2160p test pattern. There’s no chicanery at play here; this is imaging science at its most ingenious. 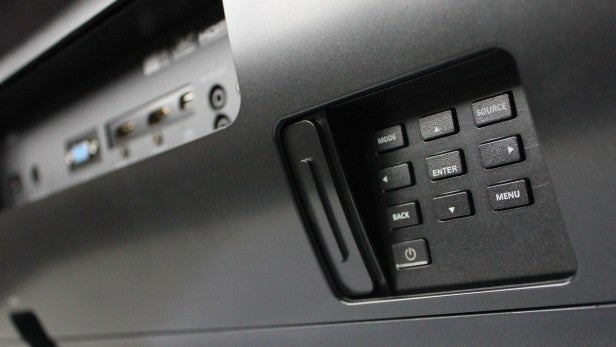 In flight, it isn’t a particularly noisy projector. The V9800 runs at 26dB and drops to 23dB in Eco mode. There’s a whining from the spinning colour wheel, but nothing a home cinema sound system running at reference level won’t obscure.

The supplied IR remote control is backlit for dark room use and offers direct access to all three inputs, as well as picture adjustments. You can tweak the basics or engage Super Resolution upscaling for HD sources, and change gamma. Different gamma settings (1.8, 2.0, 2.2, 2.4 and BT.1886) can be saved to the User presets.

To maximise the benefits of 4K projection you should opt for the largest screen you can accommodate (resolution doesn’t reward the faint of heart). The throw ratio is 1.36-2.03, with a x1.5 zoom. You can cast a 100-inch image from around 3 metres, but budget for 5 metres. 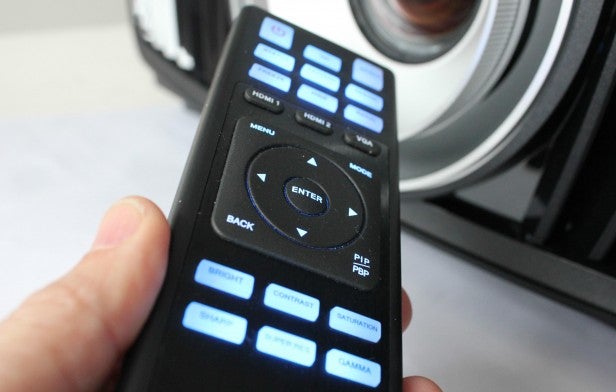 While there’s ISFccc calibration support, most users will be content with the various image presets: Bright, Standard, SRGB, Rec.709, Movie, Dark Cinema, Game, Sport, Silent and a trio of User banks. For most content, you’ll only be flipping between the Standard, Rec.709 and cinema modes. Choosing between them is largely going to be a matter of taste.

Standard offers the highest APL (Average Picture Level), and is pleasingly vivid – but Rec.709 is the richest. It has none of the murkiness often seen on dedicated cinema modes. 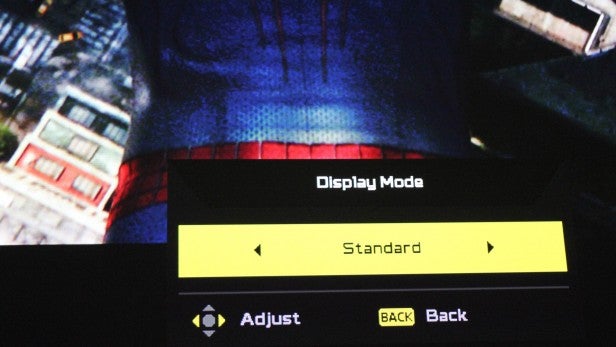 Image clarity is excellent. Razor-sharp detail has long been a characteristic of DLP, not least because there are no convergence issues with a single-chip solution. That benefit is given sharp focus here. The V9800 looks blisteringly crisp with regular HD, while the extra definition afforded by UHD is immediately apparent, whether in Planet Earth 2 in UHD or The Blacklist via Sky Q.

The V9800 isn’t just a resolution evangelist. It’s also compatible with HDR10 (High Dynamic Range) sources. Before you ask, Acer confirms that there are plans to offer an HLG HDR upgrade; it isn’t Dolby Vision-compatible, either.

It’s worth stressing that comparing HDR delivered by a home cinema projector to a UHD flat-screen is akin to comparing apples with oranges. The viewing experiences are quite different, but the results can be no less tasty. 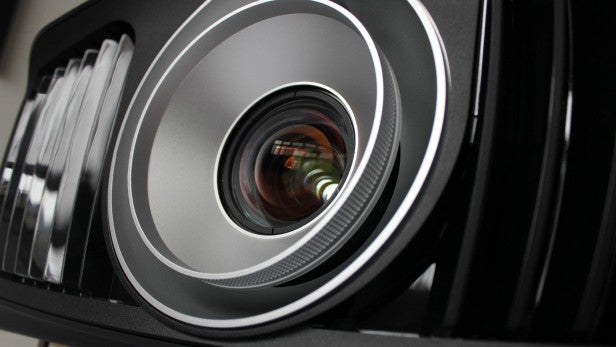 Jessica Jones (Netflix) is a good example. The HDR presentation is given genuine depth by the V9800. Neon-lit nights scenes have a cinematic intensity, while headlights dazzle. Detail is gritty and realistic.

Arctic chiller Fortitude (Sky Atlantic UHD) combines crisp detail with monochromatic landscapes. Despite these extreme contrasts, I was never distracted by any rainbow effect – a traditional trait of the DLP colour wheel.

While hues are vibrant, the projector doesn’t deliver wide colour. The six-segment RGBRGB wheel used by the V9800 (and most likely other DLP projectors featuring the same imaging solution) is Rec.709 (Acer ExaColor) and sRGB only. When wide colour is delivered in a bt.2020 container from a UHD Blu-ray, it goes through a two-stage colour and tone-mapping process to make it Rec.709-compliant. 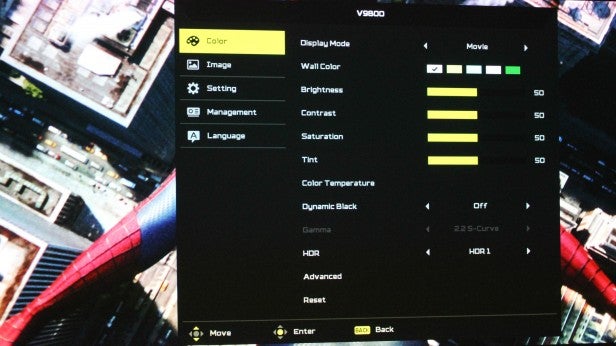 There are no clever image interpolation modes available to retain detail on fast-moving scenes, either. Thankfully, the V9800 isn’t subject to pronounced blur, although pans have a low level of judder. Importantly, if you choose Standard, Sports or Movie mode then there are no motion artefacts around moving objects.

I found the V9800 supports Sky Q 4K in 8-bit mode only; a Panasonic DMP-UB900 UHD player connected using a 12-bit output. There are two selectable HDR viewing modes available, of which the first is the one to use. 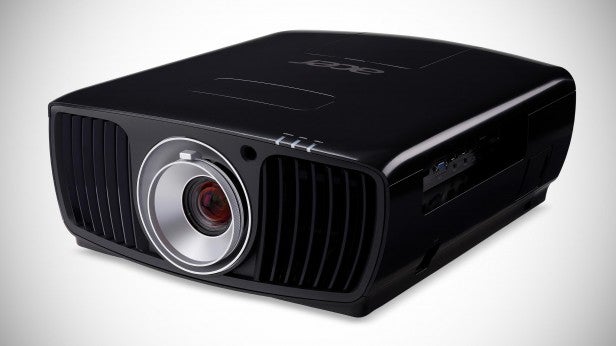 Acer has cleverly pitched this 4K DLP debutant at a rather keen price point to tempt early adopters. It undercuts most of the UHD projection competition, which makes up for some of its shortfalls. Image clarity is on the right side of awesome. The detail on-screen is revelatory, and its implementation of HDR surprisingly effective. 4K DLP has an early champion in Acer. Image quality, with both HD and UHD sources, is superb. While the sheer size of the V9800 will limit its appeal, I look forward to the prospect of smaller 4K DLPs landing later this year.

The V9800 is a game-changer in home cinema projection.