The Acer V6810 is more proof that 4K projectors – or pseudo 4K projectors, anyway – are now well and truly mainstream. After all, despite claiming to be 4K, and backing up those claims fairly convincingly, the Acer V6810 costs just £1110.

It delivers its pictures from a single-chip DLP engine, and also supports high dynamic range (HDR) playback. Although, as we’ll see, there’s a pretty tight limit on how far that HDR support goes.

The V6810 certainly isn’t the prettiest projector to grace our test benches. The grilles over its sides look a little industrial, and its top edge looks messy. At least its glossy white finish gives it a sheen of living room credibility, though. It’s small enough to sit comfortably on a coffee table, too. 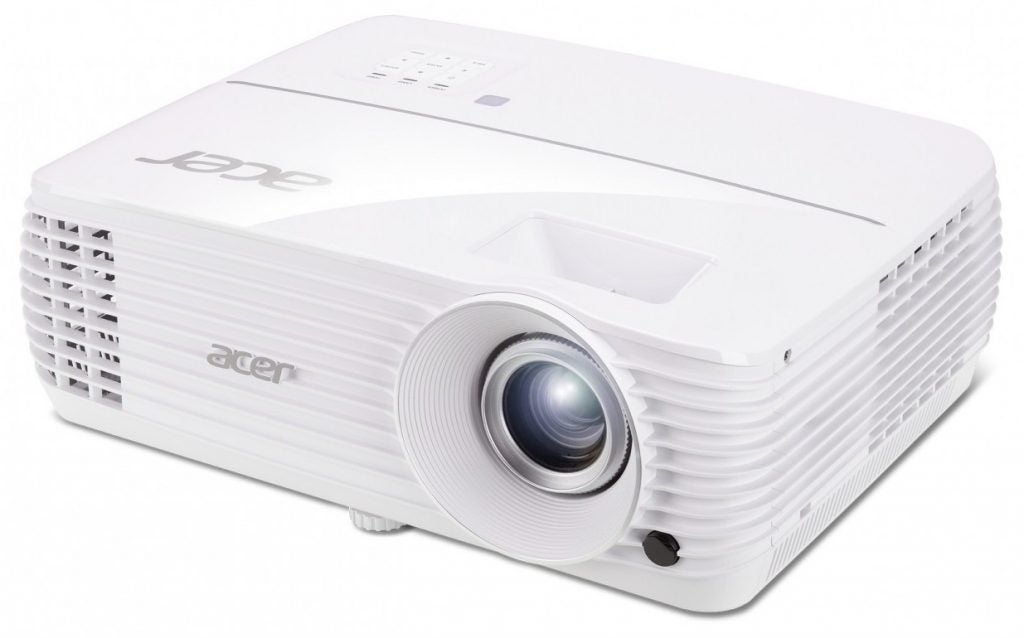 It’s chassis, meanwhile, is sturdy, which bodes well for the sound quality from its built-in 10W speaker.

The remote control that ships with the V6810 is a decent effort. It’s small enough to fit comfortably into your hand, but no so small it disappears easily down the back of your sofa. It’s backlit, too, making it easy to use in a dark room.

The Acer V6810 isn’t exactly overloaded with physical set-up aids. The amount of optical zoom is limited to just 1.2X, and there’s no optical image-shifting. You’re therefore left with a combination of a screw-down leg and digital keystone correction to get the picture to the height you want.

This is never an ideal solution, since digital keystone essentially distorts the shape of the picture. I also had trouble with the focus ring around the Acer V6810’s lens. It’s so stiff that by the time you’ve applied enough pressure to move it, it ends up moving suddenly and further than you wanted it to. 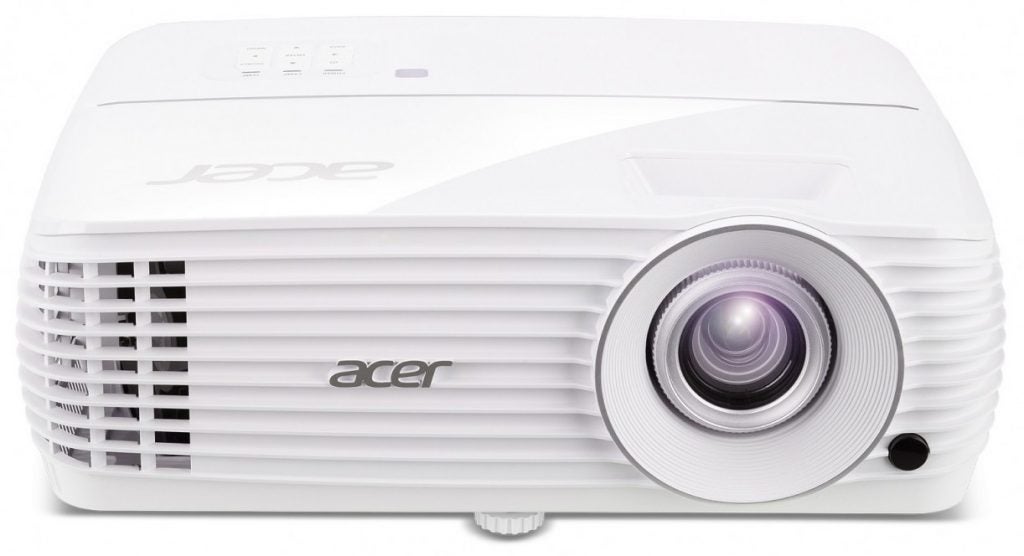 Predictably, considering how cheap it is, the V6810 doesn’t boast a huge roster of picture adjustments. For most of the time – unless you’re watching sport – I’d recommend opting for a slightly tweaked version of the Movie picture preset.

A Super Resolution feature is worth setting to level 3-4, to add a touch more sharpness without causing video noise. Finally, set the lamp to Dynamic, and leave the Acer’s colour and skin tone adjustments untouched.

The V6810’s 4K and HDR support for £1110 is at the heart of its appeal. Arguably, the 4K support isn’t true 4K, since the projector doesn’t provide 3840 x 2160 separate mirrors in its DLP optical system. Instead, it uses a combination of processing and repeated flashing of the DLP mirrors it does have to create a 4K effect.

However, it’s worth saying that this works well enough to be classed as ‘true’ 4K by America’s Consumer Technology Association (CTA).

The HDR support only extends to the industry standard HDR10 format. There’s no HLG or Dolby Vision support. This is only to be expected for the V6810’s money, however. In fact, any HDR support at all is startling on a £1110 projector.

The V6810 claims 2200 lumens of brightness and a 10,000:1 contrast ratio. These are both fairly high numbers for such a cheap projector. That said, in truth neither figure – particularly the light output – suggests that the V6810 will be able to deliver a very emphatic HDR performance. Even though Acer has provided a ColorPurity technology that combines continual lamp adjustments with a special colour wheel design to extend the V6810’s colour range and contrast.

Video connections include a pair of HDMIs (although only one supports 4K HDR), and a D-SUB PC port. There’s also a powered USB port you could use to juice up a video ‘stick’. RS-232 and 12V trigger ports, meanwhile, are provided to aid integration into a wider home entertainment system. 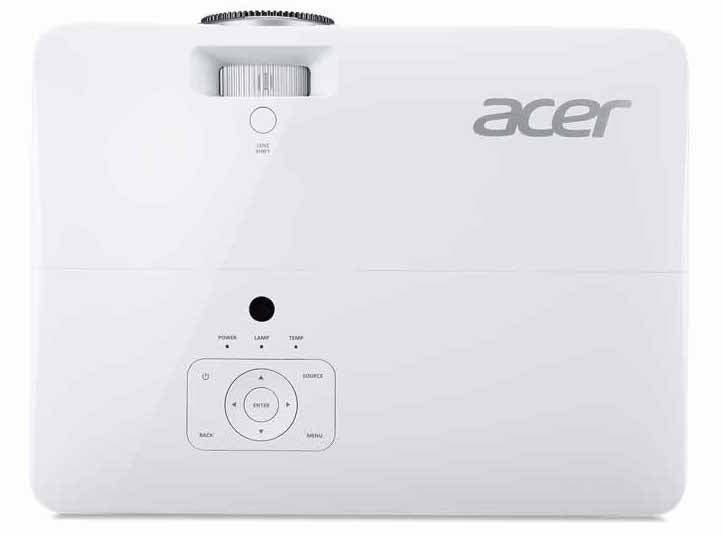 The projector’s menus include skin tone, sharpness and general colour enhancements, alongside the usual basics. A rather technically named EOTF feature, meanwhile, lets you choose between brightness and contrast when playing HDR sources. This proves handy for adjusting to different room conditions, or between baseline brightness and degrees of detail ‘clipping’ in the brightest parts of HDR pictures.

As with most budget projectors, the Acer V6810 carries a built-in speaker. This is pretty powerful at 10W, but it’s only mono.

Things didn’t get off to a great start: the V6810 struggled to lock onto a 4K feed from my Oppo 203 4K Blu-ray player. In fact, throughout my tests, the projector took an age to finally lock on to a 4K signal.

Also, once it did lock on to the signal, a couple of obvious weaknesses in its pictures immediately caught my eye.

First, its black level response proved pretty uninspiring. With HDR sources, in particular, dark scenes appear behind a very noticeable grey wash. Even if you use the best-for-contrast Movie picture preset.

In fact, the greyness remained visible over mid-bright content. Neither are this issue’s distracting qualities helped by the way the image appears, rather oddly, within a slight grey border.

The other major problem with the V6810 is its motion playback. Panning shots in 24p films are affected by distracting amounts of judder. And the projector carries no facilities to help reduce this.

There are smaller niggles, too. Clipping can occur in the brightest parts of HDR pictures, especially with the EOTF setting any higher than Low. People sensitive to DLP’s ‘rainbow effect’ will see low-level signs of the tell-tale red, green and blue striping if they move their eyes across the image. As a result, I’d recommend not setting the image so large that your eyes can’t take it all in at once.

The Dynamic lamp mode that gives the best contrast can cause occasional brightness ‘jumps’ in the picture, and finally, it’s important to stress that the V6810’s HDR playback delivers only an extremely watered-down version of HDR.

Yes, there’s a little more brightness. Colours look slightly richer. There’s a tiny bit more light range between the lightest and darkest parts of the picture versus SDR. But the sort of intensity and punch HDR can deliver on a good TV never materialises. As it doesn’t, in fact, with any home projector to date. 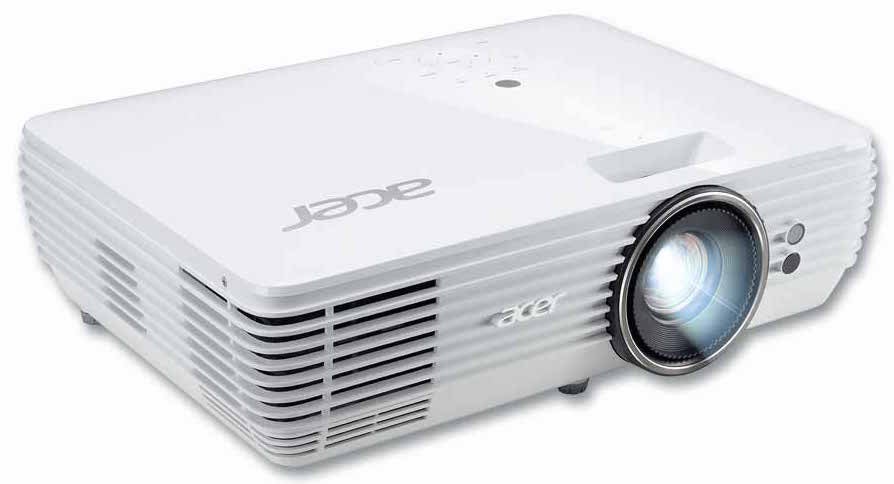 At which point I should stress that aside from the motion judder, none of the V6810’s issues are surprising. This is, after all, a strikingly cheap ‘4K’ projector, and all such models released so far have suffered similar limitations.

In a couple of ways, the V6810 actually outperforms rival budget models. Its black levels, while far from inspiring, are actually slightly better than those of other sub-£1500 4K projectors.

Also, surprisingly, it manages to produce a slightly wider colour range than most. Acer’s ColorPurity technology is apparently more than just marketing hype – although you do need to correct for a slight yellow bias with the best out-of-the-box picture presets.

While the V6810’s pictures aren’t as emphatically crisp as those of some budget ‘4K’ DLP projectors, its pictures certainly look more crisp and detailed than HD. And, actually, not pushing sharpness too hard means that images are less likely to look noisy or ‘forced’.

Not being as forensically sharp as some 4K projectors also helps the V6810’s upscaled HD images look relatively natural and clean. The V6810’s brightness is not, as I’ve explained, sufficient to deliver a true HDR experience. However, it does deliver slightly more punch with HDR sources than you get with most budget rivals.

Also, the fact that DLP rainbowing is only generally an issue when you move your eyes over the image is a pretty solid result for a budget DLP projector.

The Acer V6810 doesn’t carry a Game picture preset. Fortunately, though, its input lag measures on average a pretty respectable 40ms. This slipped beyond 60ms with some measurements, but most measurements were around 30ms.

The Acer V6810 doesn’t suffer significantly with fan noise, which is impressive considering how bright it is. Unfortunately, this achievement is offset by quite a pronounced hum from the colour wheel. A hum that the projector’s built-in speaker doesn’t really have what it takes to hide – even at top volume, the speaker doesn’t get very loud, and there’s no real bass to speak of.

The speaker does at least manage to project the sound a small distance away from the chassis. But not enough to disguise the fact that the sound is coming from the projector, rather than the on-screen action.

Despite costing less than many HD projectors, the Acer V6810 delivers something that closely resembles a 4K picture. It has a slightly wider colour range than most projectors, too, and marginally deeper black levels. Provided you set it up correctly, anyway.

Spending a few hundred pounds more on the BenQ W1700 or, especially, the Optoma UHD40 will give you a substantial performance boost. Better black levels and a more convincing HDR performance, in particular.

There’s an argument to be made, too, for forgoing 4K and HDR support to get a good-quality HD projector. The Full HD BenQ W1210ST, for instance, offers up far more movie-like black levels and costs only £900 – although of course, its pictures aren’t as sharp and detailed.

The Acer V6810 delivers only a limited HDR performance – but if you value detail and clarity over contrast, the V6810 really does offer up near-4K resolutions at a ground-breaking price.