Acer likes to produce headline-grabbing products. It launched the Predator 21 X curved gaming laptop last September at IFA in Berlin and was met with a mixture of amusement and astonishment, which was a sign of things to come.

While the 21-inch 21 X was a massive laptop weighing more than 8kg, the 15.6-inch Triton 700 is a relative lightweight, tipping the scales at 2.6kg and slipping into an 18.9mm-thick casing. Considering the components inside, I’m pretty impressed. 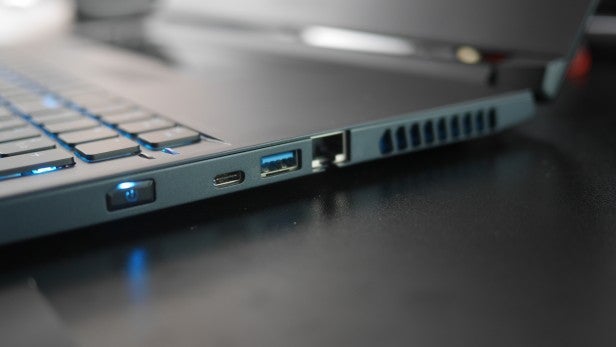 But first, design and build. Acer being Acer, it’s put the keyboard front-and-centre. Why? It’s hoping gamers will hook up a USB mouse almost immediately, so they won’t have to reach for the rather strange touchpad that sits just under the screen. Not only is it weirdly positioned, it’s also quite a lot grippier than a regular touchpad and isn’t very pleasant to use. You have to arc your arm over the keyboard, which is a bit of strain; I couldn’t imagine ever using the touchpad unless I was desperate. 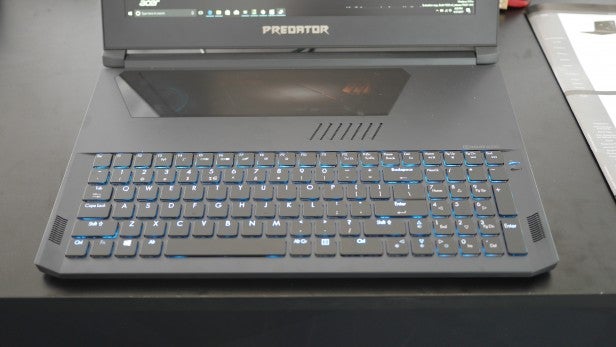 It does at least look cool: under the Gorilla Glass coating a slither of the laptop’s cooling system is revealed. I’ve never seen a transparent touchpad before, and I’d be happy to see more of them.

The touchpad’s loss is the keyboard’s gain. The island-style, backlit keys get the full width of the laptop’s 15.6-inch chassis, which is loads of space. The keys have mechanical switches, and while they’ll never match the satisfying feeling of a big, fat Cherry MX board I was pleasantly surprised by how tactile they are. The keys don’t travel far before they click, and it’s all quite pleasant. 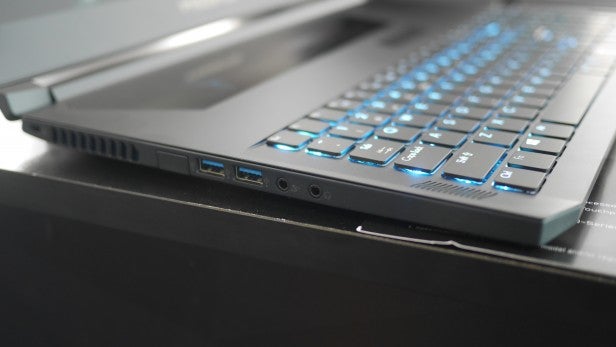 Again, their front-and-centre position is a little weird, and I hope Acer provides a wrist rest like it did with the Predator 21 X, otherwise long sessions might get a little uncomfortable.

The chassis design is sharp and angular, and is a much more understated affair than Acer’s other laptops. This is a bit of a stealth gaming machine – at least until you open the lid.

Being so dense, the Triton 700 feels well put together and there’s not a hint of flex from the chassis. 2.6kg is heavy, but nothing a decent backpack won’t be able to stomach.

The selection of ports is pretty standard – a USB 2.0 (hidden behind an unexplained removable flap), three USB 3.0s, a USB 3.1 Type-C and gigabit Ethernet.

The screen, meanwhile, is a Full HD IPS panel. It looks great, although it’s a little disappointing that you don’t get a 1440p or Ultra HD display for your money.

Now for those specs: You get a quad-core Intel Core i5 or i7 processor, paired with 16GB of DDR4 memory as standard. That’s alongside an 8GB Nvidia GeForce GTX 1080, which is more than fast enough to play the latest games at 4K, let alone on the Full HD screen supplied here. All of this is more than good enough for a video-editing, gaming powerhouse.

The model I tested had the GTX 1080 on board, but Acer didn’t specify the GPU on its spec sheet, which leads me to wonder whether there’ll end up being an updated, next-gen GPU by the time the Triton 700 launches into Europe in August. It’s either that, or the option of downgrading to a GTX 1070 for a lower-cost specification.

This is one of the most attractive gaming laptops I’ve seen this year, and it’s certainly one of Acer’s best pieces of work from a physical standpoint. But that bizarre touchpad, however seldom it’s used, is extremely weird and would put me off ever using this machine on the move without a USB mouse.