Overall the K750’s image quality came as a pleasant surprise compared with our previous experiences of laser-based projection technology. Particularly welcome is its black level response. Dark scenes of the sort rife in many of our favourite movies don’t look nearly as greyed over and unnaturally coloured as expected. In fact, the blacks achieved by the K750, especially using its Eco lamp setting, are markedly superior to those you get with LCD projectors at the same sort of price point.

Before anyone gets too carried away by this it should be added that the methods the K750 employs to deliver its credible black colours do result in noticeable amounts of subtle shadow detail getting crushed out of the image in the darkest areas. There’s a faint greenish tinge over black areas too that we didn’t manage to fully compensate for during calibration – an artefact, perhaps, of the way the green part of the image is created by the K750’s optical arrangement. More on this later.

We detected some subtle fizzing noise underlying dark areas of the picture too (noise which goes from subtle to aggressive, bizarrely, if you use the Dark Cinema preset). But still, by the standards of the sub-£1500 projection market as a whole the K750’s black level efforts aren’t bad at all, and certainly go way beyond what we’d anticipated.

Another notable strength of the K750’s pictures is their sharpness. It’s nothing short of ruthless in its delivery of every possible pixel a source has to offer. This isn’t always a good thing; if your source contains much noise or isn’t HD the K750 is all too good at exposing these weaknesses. However, while it might have been nice if Acer had provided a few more tricks for hiding these source weaknesses, it doesn’t really seem fair to blame the K750 for source failings.

We were pleased to see, too, that the image’s sharpness scarcely drops at all when there’s lots of motion in the frame. Nor do camera pans and tracking shots reveal serious issues with judder, and it was good to see as well that the K750 is immune to the fizzing dot noise over skin tones during camera pans that more traditional single-chip DLP projectors can suffer with.

Turning to the K750’s colour response, tones when watching films using the relatively subdued image settings that make films look their best we were impressed by the balance and subtle toning the K750 retains with even the darkest colours. Though as noted earlier colours – especially skin tones – during dark scenes are sometimes slightly hurt by a gentle green bias.

Unfortunately this green bias ramps up hugely if you run the projector at the much brighter output level best suited for data projection, leaving data sources looking washed out and unnatural. The Bright and Presentation presets are especially poor in this regard, and try as we might we never managed to find a combination of settings that really solved the green bias satisfactorily. In fact, we ended up feeling that the most satisfying data results were obtained when using the Movie setting – though this setting’s lack of brightness won’t really work in a typical meeting room environment. 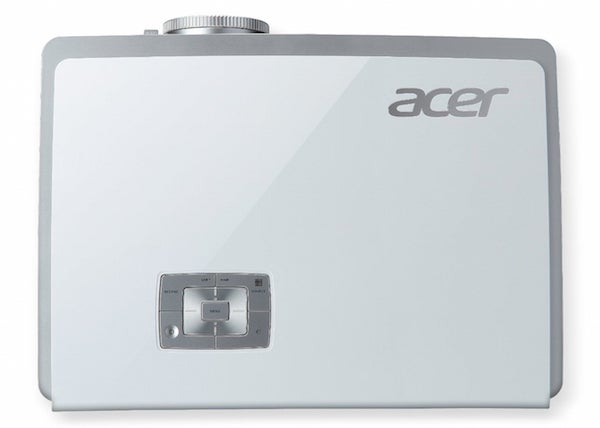 There are other problems with the K750’s pictures too. The biggest issue is that because of the green bias that creeps in when you run the projector brightly you’re pretty much forced to use only a fraction of that promised 1500 Lumens, leaving pictures looking quite dull in anything other than a fully blacked out room.

We also saw the occasional trace of DLP’s rainbow effect, though it must be stressed that this didn’t crop up as often or as obviously as it tends to with typical affordable single-chip DLP projectors.