The K750 could be the future of
projection. In one fell swoop it hopes to banish the lifespan problems
of traditional UHP lamps, the expense and brightness issues of LED
lamps, and the eyesight safety concerns associated with laser-based
lighting. How? By creating a DLP projector with a hybrid light system
that combines red and blue LEDs, with a blue laser reflected from a
phosphor ‘disc’ to produce green.

Deflecting the laser off the
phosphor disc reduces its intensity enough to prevent it damaging eyes
that might accidentally look down the lens, and applying it to the green
colour element should also help boost the projector’s overall
brightness.

It all sounds very clever. But does the K750 sidestep the performance
issues we’ve previously seen attached to laser-based projection
technologies?

The
K750 is seriously attractive. It combines a high-gloss top panel with
an embossed silver Acer logo and grille-riddled matt grey edges, while
its rounded corners give it soft, living-room-friendly finish. The K750
isn’t pitched exclusively as a home cinema projector, though; it’s
reckoned to be up to data duties, too.

Given the K750’s
affordable price, it’s remarkably heavy and robustly built, hinting at
some quality internal componentry. Unless this is just the sort of
weight and build quality you get as standard with an effective hybrid
projection system.

Connections are a little on the rudimentary
side, comprising two HDMIs, a 3mm audio in/out loop, a VGA input, an
S-Video input (yes, these still exist), a composite video port, and an
RS-232 port for system integration.

We’re starting to expect USB
sockets and even Wi-Fi on modern data projectors these days, but we
guess we could see our way to forgiving their absence on the K750 if its
new-fangled projection system delivers the picture goods.

Putting
more meat on the bones of what the hybrid projection system in the K750
really means in practical terms, perhaps the most eye-catching spec is a
claimed lamp life of 20,000 hours. This is between five and a whopping
10 times as long as you can expect with normal projection lamps – and
you shouldn’t experience anywhere near the same reduction in picture
quality over that time as you get with UHP lamps, which can lose as much
as 50% of their brightness after a year’s typical use.

As
for the amount of brightness on offer, Acer claims 1500 Lumens. This
isn’t actually as high as the figures claimed for some UHP-based budget
projectors, but it is bright by LED standards.

At first glance we
were also wowed by the K750’s claimed contrast ratio of 100,000:1. But
on reflection we suspect this figure will turn out to be more of a
reflection of the intense brightness delivered by the laser part of the
optics than a promise of brilliant black levels.

The K750 enjoys a
Full HD 1920 x 1080 native resolution and sports a fulsome suite of
picture-calibration aids which confirm that Acer’s projector has
(unusually) equal potential as both a data and a home cinema projector.

One
other key feature is Acer’s ColorBoost II technology, which combines an
“optimised” 6-segment RGBCYW colour wheel with image processing and
light manipulation to deliver what’s claimed to be a more natural colour
range – especially for video sources – as well as an ultra-vivid look
to very vibrant parts of the image.

There is one feature the
K750 doesn’t have, though: 3D playback. This is unfortunate given that
we still hold a spluttering flame for a good-quality 3D experience, but
we suspect 3D’s absence won’t be a deal breaker for too many other
people these days.

The K750 offers a
reasonable amount of optical zoom to help you get its image in the right
place on your screen or wall, and all four of its tabletop legs can be
screwed down to different heights to help you get your angles right.

It’s
a bit disappointing, though, to discover that the K750 doesn’t carry
any optical vertical image shift, meaning that you may find it very
difficult to get the edges of your image straight without using keystone
correction – a technology which essentially distorts pictures to
achieve a perfect rectangular shape. 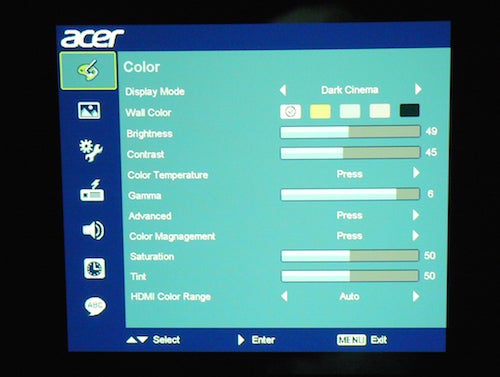 It’s also important to note that the K750’s lens is quite a long-throw affair, and so won’t suit small rooms.

The
K750’s menus are a bit longwinded in their design and are fiddly to
navigate via the unusually large but inconsistently responsive remote
control. They do, though, include a good selection of set up tools.
These include a Movie preset as well as data options, a dynamic contrast
mode, a black level extender, the DLP Brilliant Colour system for
enriched colour response, and a full suite of colour management tools.

Our
main setup advice would be that you start with the Movie preset but
increase the brightness by two or three notches to try and improve
shadow detail response. Leave off the Black Extension feature, change
the colour temperature to CT1 from its rather yellowy CT2 default, and
run the projector on its Eco setting when watching a film to both enjoy a
more natural, cinematic image and reduce fan noise.