The Acer Iconia Tab 10 A3-A40 is a low-cost Android tablet, but one that just includes a reasonable set of core specs for the money.

Most notable here is the 1,920 x 1,200 pixel screen, which helps to lift the A3-A40 out of the pixellated swamp in which most ultra-budget tablets still live. It’s only a pity the display is dated in other respects, and that the processor only just provides enough power to keep the tablet ticking over.

There aren’t many better 10-inch equivalents at £179, but there are better 8-inch tablets out there.

The Acer Iconia Tab 10 A3-A40 is a 10.1-inch widescreen tablet. Its design is more like that of the first Android tablets than the trendiest models we see today. It’s a tablet you’ll use with two hands; it’s a little too big and heavy to be used comfortably  single-handedly.

Held between two palms, though, it feels right at home. It weighs 529g and is 8.9mm thick, and for all its surface-level bling, the Acer Iconia Tab 10 A3-A40 is a plastic-shelled tablet that doesn’t feel anywhere near as fancy as an iPad.

Build quality feels decent enough at first, but again, it isn’t close to what is on offer from Apple. Hand pressure can result in some flexing, turning the whole screen slightly greenish. Yikes.

The rubberised plastic rear of the device is lightly textured for extra grip, and the sides are plain plastic.

There are parts of the Acer Iconia Tab 10 A3-A40’s design that will raise eyebrows, for better or worse. Prime example: on the rear of the device is a chromed bronze plate that houses the camera; it also flips off to reveal the microSD slot and the micro-HDMI, which lets you hook the tablet up to a TV.

There’s 32GB storage included in the tablet, which may be ample for your needs. It’s Acer’s main act of generosity.

The metal elements of the design appear on the front too. A stepped gradient along the speaker grilles and buttons at the centre of each side are of the same bronze shade. Acer has tried hard to steer clear of the A3-A40 looking like an anonymous black rectangle, but its design flourishes aren’t entirely classy.

In fact, I’d describe it as the tablet decoration equivalent of cheap jewellery.

The Acer Iconia Tab 10 A3-A40’s best feature is its display. A screen resolution of 1,920 x 1,200 is high enough to make images look reasonably sharp. It isn’t at the point of making the screen “Retina” grade – where you struggle to see any pixels at all – but it’s satisfyingly sharp. 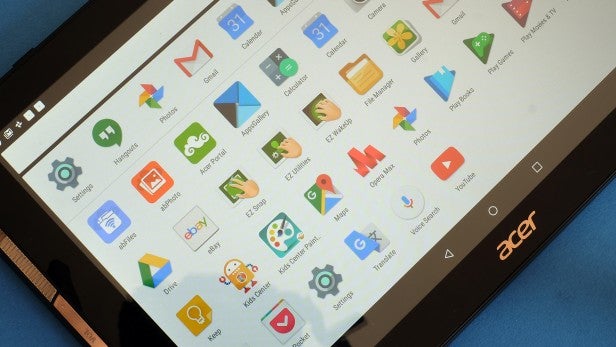 Colours offer decent saturation and plenty of energy. The A3-A40 struggles with the very deepest reds, plus the colour character is slightly pastelly, but the effect is pleasant enough.

There is one big issue with the Acer Iconia Tab 10 A3-A40’s screen, however. Its recessed architecture is reflective and contrast-sapping, making the display panel itself appear grey rather than black. This is because the display isn’t fully laminated, where the touchscreen, display and top glass are bonded together in one layer. Having separate layers results in some light reflection, which in turn leads to that grey cast.

See what we mean? The display, turned off, is quite grey rather than near-black

The brighter the room, the worse the Acer Iconia Tab 10 A3-A40 will look. The lack of an ambient light sensor also means that the A3-A40 doesn’t feature an auto brightness setting; you need to alter the brightness manually. However, the omission on a tablet is nowhere near as annoying as it is on a phone.

The Acer Iconia Tab 10 A3-A40 does have a blue-light filter mode, though, which gives the screen a slightly orange tinge to help reduce eyestrain. It’s handy if you’re going to read on the tablet before bed.