Editor’s Note: our review of the latest Acer Chromebook 14 is now live – the following is a review of an older model.

The Acer Chromebook 14 is not a MacBook Air, even if it looks exactly like one. But once you look past the Apple-aping design, you’ll see that Acer has put together a great-value Chromebook that is sure to make buyers on a budget very happy indeed.

It may not have the fastest processor, but a large screen and excellent battery life make it perfect for those who are after a cheap laptop with a little some room to manoeuvre.

Like one of TrustedReviews’ all-time favourite Chromebooks, the Toshiba Chromebook 2, the Acer Chromebook 14 is available in two variants in the UK – and many more internationally.

The model I tested is the cheapest option (£170) with 2GB of RAM and a 1,366 x 768-pixel screen. One step up is a £280 model that nets you a Full HD screen and 4GB of RAM. The price difference is significant, but if you have a little more to spend then the upgrade will probably be worth it for that extra screen fidelity and memory.

In terms of layout and design, the Acer Chromebook 14 looks very similar to the MacBook Air. Stylish, sharp edges, rounded corners and an integrated keyboard tray make the Chromebook 14 look far more expensive than it is. Add to this the numerous metallic pieces in the light-grey chassis – which contains some metal, but I suspect is fairly heavy on the plastic – and you have a machine that exudes an air of class.

The lid, meanwhile, has a brushed-metallic coating that doesn’t really match the rest of the machine; it looks a little cheap. Overall, though, this is a great-looking laptop for the price. 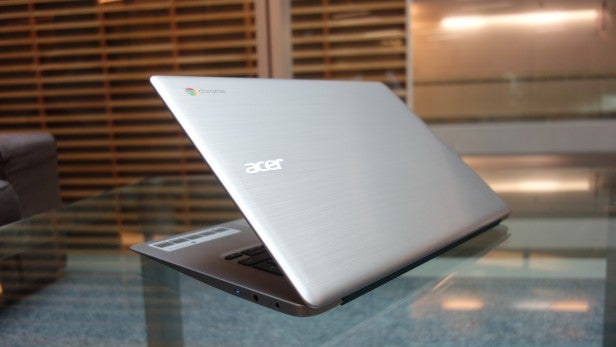 Good looks don’t come in combination with a light weight, however; it weighs in at almost 1.7kg. That’s the price you pay for a larger screen – and I think it’s a worthy compromise. You won’t mind carrying this around in your bag most days, although you’ll probably notice it. At only 1.8cm thick, however, it won’t take up a huge amount of room.

There’s no shortage of ports on the Chromebook 14. Acer includes two USB 3.0 ports and a full-sized HDMI connector on the left, which are all very welcome. On the right sit the power connector and a combination 3.5mm jack for headsets.

An additional USB 3.0 port on the right would have been useful, to avoid the left side of the machine from becoming so busy when plugging in peripherals. Nevertheless, this remains a decent selection and is about as good as it gets for a Chromebook.

The keyboard is fine, without being outstanding. It’s coated in a not-particularly-grippy plastic with the keys featuring stuck-on letters, numbers and symbols, rather than those of the etched variety. This means that there is a possibility that they’ll wear out over the course of a few years; but this is fairly typical of cheap laptops.

Meanwhile, key travel and feel is minimal, which isn’t ideal – but I didn’t experience any issues typing on the keyboard for lengthy periods. 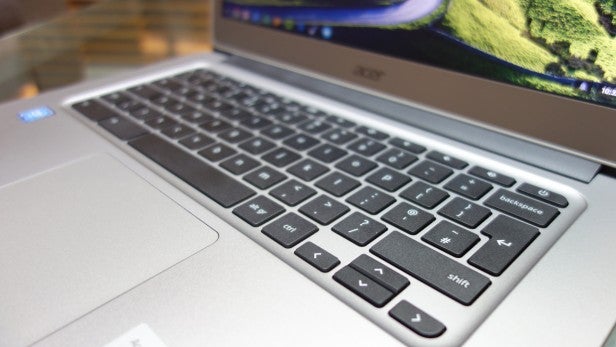 The touchpad is surprisingly good. It’s sensitive and responds to two-fingered scrolling in exactly the way I’d expect it to. The physical click action is responsive and doesn’t ping the cursor around the screen. Clicking and dragging objects around was fine too.

Things start to get a little messy only when you begin pushing the Chromebook 14 too hard, in which case it starts to stutter. But this happens only if you get overly ambitious with your browser tab opening habits.

By any standard, the Chromebook 14’s 1,366 x 768-pixel screen is poor. It covers only 52% of the sRGB colour gamut, leaving a screen that lacks vibrancy. Contrast is rated at just 339:1 thanks to slightly high black levels of 0.69 nits. Maximum brightness is acceptable at 236 nits, and thanks to the matte coating on the screen, using this machine outside in bright sunlight shouldn’t prove an issue. 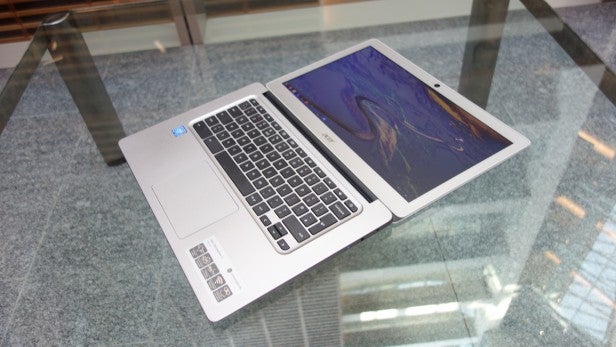 There’s a fair amount of colour shift if you move off-centre, however, but at no point is the screen illegible. At this price, that’s the target – and Acer has just about met it.

The screen’s best feature is its ability to lie completely flat. This makes working on your lap in bed with your knees up not only possible, but also comfortable. More laptops should have this capability.

The Chromebook 14 is home to a low-power Intel Celeron N3060. It’s a dual-core chip running between1.6GHz and 2.48GHz, depending on thermal conditions. It has no cooling fans, so it runs silently.

The processor is supported by 2GB of RAM, which in this day and age is barely enough to have five media-heavy browser tabs open at once.

I really had to pare down the number open. Even then continued to experienced problems, with some tabs being put to sleep and my having to reload them. I wish Acer would have raised the price a little and offered this machine with 4GB of memory – but in the UK at least, this isn’t an option. 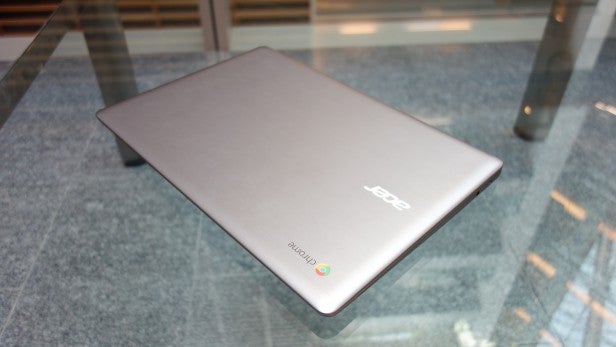 Once a page has loaded, I had no issues scrolling up and down them smoothly, but I did prefer to wait for them to load fully before attempting this.

TrustedReviews’ regular benchmarks don’t work on Chrome OS, but I did record a browser-based Kraken score of 5,351ms. In Kraken, a lower score is better, and this result puts the Chromebook 14 in the same range as the rest of the Celeron Chromebook crowd.

If you’re a heavy user, you’ll have to change the way you browse the web when using the Chromebook 14. If you do, you’ll be rewarded with comparatively smooth performance. If you can’t, you should buy a more expensive Windows laptop with at least an Intel Core i3 on board.

One area of the Chromebook 14 that can’t be faulted is wireless connectivity: there’s the latest 802.11ac Wi-Fi on board. This should mean faster and more reliable connections, and during my time with the laptop I never experienced any problems with weak signals. This remained true even in patchy public hotspots and in my own garden, where signal is often very poor.

If you’re familiar with Windows, Chrome OS will be a bit of a departure. The OS is essentially a web browser with 32GB of local storage for a small number of downloads. There are very few local applications you’ll want to download right now, and all the best stuff is browser-based. This is likely to change soon with the introduction of Android apps on Chrome OS, but this hasn’t yet materialised on most Chromebooks. 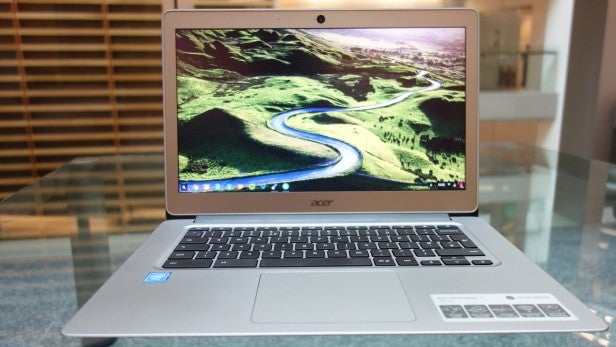 If you’re happy to start working in Google Drive or other cloud services such as Office365, you’ll do just fine with Chrome OS. Google Drive is probably the best option at the moment, since there’s a Chrome OS plug-in that lets you edit your documents while you’re offline. However, I’d still advise you spend most of your time near a Wi-Fi connection.

There’s even a free browser-based image-editing program called Pixlr, which is a super-basic Photoshop replacement for minor touch-ups or tweaks to graphics.

The two downward-firing speakers on the Chromebook 14 are pretty good. At around half volume music displays some depth, and although there’s no bass, the sound isn’t bad at all. As ever, the use of headphones is advised – but they’ll do the job just fine.

The webcam is excellent. It has a super-wide field of view, meaning you could easily get three people in the frame in a video chat, and it had no problem dealing with extreme backlighting when I used it outdoors on a sunny day. 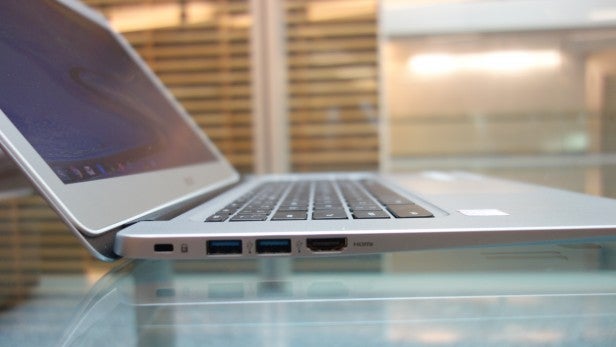 The built-in microphone is adequate, delivering clear voices at a reasonable volume. It struggled slightly in a noisy outdoor cafe, but at no point was my chatting partner unable to hear what I was saying.

The Chromebook 14’s battery life is phenomenally good, which is a consequence of its larger form factor. I was able to get through a full day of work while using the Chromebook at around 70% brightness. At half brightness I’d be confident this machine could get through 9-10 hours of screen-on time on a single charge – even more if you used it conservatively. This puts it in the same league as the Toshiba Chromebook 2.

Watching Netflix at half brightness consumed just 9% of the battery per hour, so you could expect around 10 hours of streaming as well.

One thing to note is that Chrome OS isn’t brilliant at reporting battery status, and the final 10% of its battery appears to drain far quicker than the previous 90%. Make sure you have a charger to hand if you’re below15%.

The battery takes a couple of hours to charge from empty while the laptop is switched on.

If you want a slightly larger Chromebook for less than £200, the Chromebook 14 is a no-brainer. It might not offer the best performance around, but you won’t find a new laptop of this size for less money. With excellent battery life, great build quality and just-about-adequate performance, the Chromebook 14 makes a great on-the-road laptop for basic work tasks. Just don’t get overly ambitious with the number of tabs you have open.

A long-lasting laptop that offers superb value for money.