The Nitro’s key component is Nvidia’s GeForce GTX 860M. It’s a mid-range part from last year’s mobile chipset range, but it’s still far better than most of this machine’s rivals. Specs wise, it’s got the same configuration as the desktop GTX 750 Ti, with 640 stream processors and 2GB of GDDR5 memory.

It’s enough to handle modern games at good quality levels. In Bioshock Infinite’s toughest quality settings the Acer averaged a smooth 40fps, while it managed 37fps in Battlefield 4 and Crysis 3, with each game running at its second-best quality levels.

That’s far better than most of the Acer’s rivals can manage, as those machines rely on Intel integrated graphics, which while improving in recent years is still some way behind a dedicated card. The gulf between integrated and discrete graphics is further highlighted by 3D Mark’s tests: the Acer scored 97,550 in the Ice Storm test, while the Asus and HP machines couldn’t get beyond 45,000 in the same test. 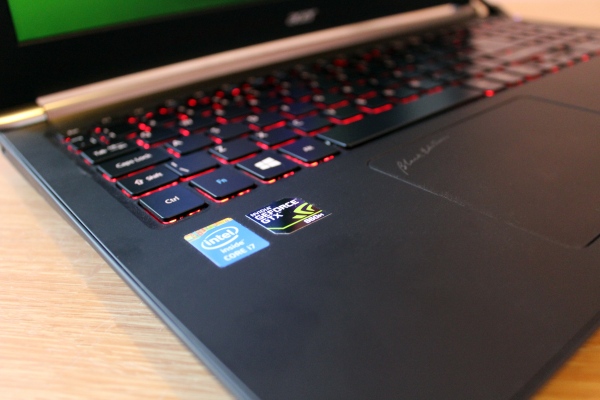 Only high-end gaming notebooks are faster. MSI’s GS70, which has an Nvidia GeForce GTX 970M, scored 113,998 – but that machine costs twice as much as the Acer.

The Nitro’s application processing ability comes from an Intel Core i7-4710HQ. This is a stalwart, powerhouse of a processor, with four 2.5GHz cores running at up to 3.7GHz. This powers is way to a score of 4,240 in PC Mark 7. That’s an improvement on the Core i5 chip in the HP, and it’s also better than the low-power Core i7 chip inside the Asus Transformer. Combined with a reasonable 8GB of RAM and it means that the Nitro will be able to cope with pretty much anything you throw at it, including intensive software as well as high-end games.

The 1TB hard disk has ample space for games, and it’s a hybrid drive that’s got a NAND memory cache, which means it’s supposed to provide SSD-style speed alongside its high capacity. In practise, it’s underwhelming. Its sequential read and write speeds of 118MB/s and 112MB/s are a tad better than many laptop hard disks, but they’re still hundreds of megabytes behind SSD speeds. The boot time wasn’t great either – at 26s, it’s more than twice as slow as SSD-powered devices.

This is one area where gaming laptops traditionally falter, and Acer’s machine proved no better.

When idle it’s near-silent and the processor and graphics temperatures of 44 and 57 degrees are fine. However, any sort of load on the components saw the situation deteriorate.

We ran a games benchmark and, after just a couple of minutes, the fans created a consistent noise – nothing loud, but enough to be noticeable in a quiet room. More worrying were the temperatures: it wasn’t a processor-intensive test, but the CPU still headed beyond 90 degrees and occasionally throttled its speed to less than 1.5GHz. The graphics card topped out at 79 degrees and had no such issues. 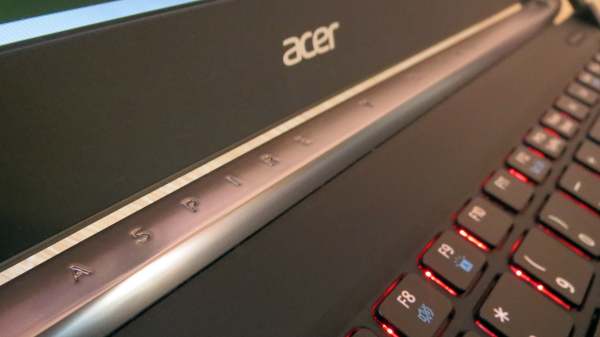 A stress-test on the processor and graphics core made the situation worse. The processor, again, was the poor performer, with a top temperature of 97 degrees and more frequent, severe throttling – the CPU dropped down to 800MHz on occasion to get the heat under control. The graphics core rose to 87 degrees, which is high, but there was no sign of diminished performance.

It’s a poor result and, while it’s only going to affect those who really push the components, it’s worth bearing in mind.

It’s doubly disappointing because this version of the Nitro doesn’t have Acer’s DustDefender and CoolBoost technologies – the former is a system designed to improve dust removal from the internals, and the latter is an app to control fan speeds. They’re only available on 17in versions of this machine, but there’s a case for their inclusion here too.

Our standard battery test locks the screen at 40% brightness and runs a web browsing and video chat simulation. It’s not a demanding benchmark, but the Acer’s three-cell battery lasted for just three hours and 43 minutes. That’s poor: the HP Envy beat five hours, and the Asus hybrid lasted for almost double that time.

The sealed battery didn’t cope well when tasked with gaming, either. In a demanding 3D graphics test with the screen running at 100% brightness, the Acer lasted around fifty minutes – a result on par with the greediest gaming laptops.