The Nitro’s scrabble-tile keyboard is okay: it’s got a sturdy base, and the keys have reasonable travel, which makes it good enough for light work and web browsing.

However, those who do plenty of typing – writers and the like – will prefer
more solid keys. These feel flimsy and hollow, and we’re not confident about hammering this unit day after day. Likewise it doesn’t cut the mustard for gaming for these very same reasons. 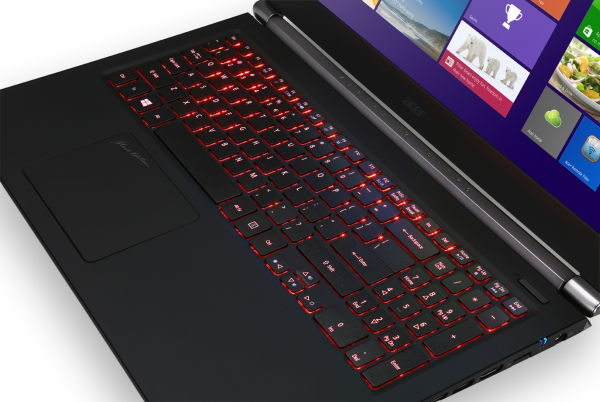 The layout is also mixed – we like the numberpad and the
separated cursor keys, but we’re not fans of the Hash key being
essentially joined to the Return button.

The trackpad follows a similar pattern. Its smooth surface and light buttons make it ideal for most tasks, but the two buttons can’t be pressed simultaneously, which is frustrating in some situations. As ever, for any serious gaming you’ll want to get a mouse.

The cheapest 15.6in Aspire V Nitro on the UK market costs just £499, but it comes with a vastly reduced specification: the screen’s resolution is cut back to 1,366 x 768, there’s no sign of Nvidia’s discrete graphics, and processing grunt comes from a Core i3 processor.

A 15.6in version is available that costs £1,300. That machine includes a 128GB SSD and 16GB of memory alongside our sample’s Core i7 processor and Nvidia GPU.

No matter which version of the Nitro you buy, it’ll likely be loaded with bloatware. Our sample was overflowing with unwanted software: Acer installs its own office tools, cloud storage applications and media players, and we discovered two media apps from CyberLink, a PDF reader, and the WildTangent games store. McAfee was installed, and we could barely move without being bothered by pop-ups.

Other applications are more useful – Skype and Spotify, for instance – but they’re free downloads anyway. 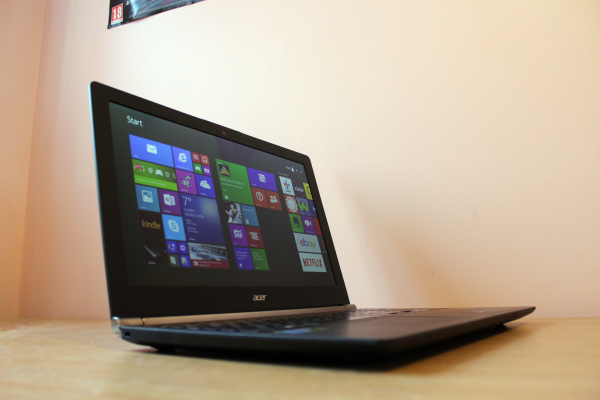 Acer’s latest laptop got off to a good start with solid core components: the Nvidia graphics chip copes with modern games, the Core i7 processor is powerful, and the screen has good qualities, especially when it comes to contrast and colour accuracy.

In several key categories, however, it’s not as competent. Battery life is below par, and its components generate enough heat that application performance is affected – worth bearing in mind if you’re really going to push the hardware. The keyboard and trackpad are fine, but they’re not good enough for keen gamers or typists.

It’s also hampered by its jack-of-all-trades design. The key appeal of these more generic 15.6in laptops is as relatively cheap ways to get a full-fledged computer, with a decent size screen. The cheaper configurations of this machine do indeed offer that but the model we’re looking is too close to the price of more appealing specialised models.

Proper gaming notebooks with similar internals won’t cost much more but will likely have better connectivity and cooling, while Ultrabooks like the Asus Zenbook offer ample performance for everyday tasks (not gaming) and are super-stylish and light.

This is a decent option if you’re searching for a powerful, mid-sized notebook for work and play, but be warned of its deficiencies – and the strength of specialised rivals.

The Acer’s good specification means it’s got enough power for gaming and demanding work, and it’s backed up by reasonable ergonomics and a good screen quality. Its thermal performance and battery life let it down, though, and hardcore users won’t be sated by its keyboard or trackpad. It’s a decent general-purpose notebook, but gaming laptops, hybrids and Ultrabooks are better options if you’ve got particular tasks in mind.