What is the Acer Aspire Switch 11 V?

The 11 V is the latest model in Acer’s Switch range of convertible tablets. As a tablet, it’s a well-constructed device built with Windows 10 Home 64-bit edition preinstalled. But pair it with the included keyboard dock and the Switch becomes a capable notebook.

Despite its flexibility and reasonable specifications, the £550 asking price is a little steep for what’s on offer.

The overall design of the Acer Switch series hasn’t changed much since the first one rolled off the manufacturing plant many moons ago.

I’m not overly fond of the Switch’s brushed-silver casing and am of the opinion that there are far better-looking convertibles out there. It isn’t an eyesore; it just isn’t quite as alluring as other metallic-finished products I’ve seen in recent months, such as the Dell XPS 12.

The Switch 11 V’s design is also on the chunky side. The tablet and keyboard parts together measure 299 x 206 x 21mm, with each device weighing around 800g. At 1.6kg then, it’s quite weighty for an 11.6-inch convertible.

However, the Switch’s build quality is quite good. I wouldn’t recommend you go drop-testing it on the kitchen floor, but for the most part it will withstand the rigours of a student backpack or the busy tussle of the rush-hour commute. 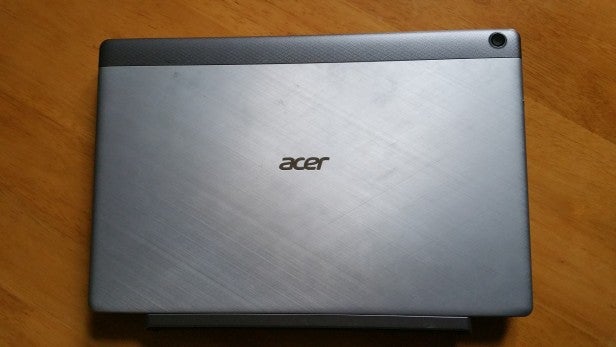 There’s a solid “click” when you dock the tablet section with the keyboard, and both sections feel sturdy enough.

The tablet section snaps to the dock via a long magnetic strip at the base of the connector on the rear of the keyboard/dock, meaning there’s no additional button or unlock switch on the base.

The magnets are strong enough to ensure that the clasp is held firmly in position, unlikely to separate should you pick up the Switch either by the tablet or the keyboard section.

However, I was pleased to see that the two parts of the device are physically connected via a raised 10-pin slot in the centre of the magnetic strip. This is a far better option than a Bluetooth connection, and allows for a better transfer between the single USB 3.0 port located to one side of the keyboard.

In addition to accessing the USB port, the model I tested featured a 500GB hard drive built directly into the keyboard/dock section, activated when you snap the two sections together.

The keyboard/dock section is pleasant to type on. In general, Acer laptops have great keyboards – and this remains true of the Switch 11 V. Keys are generously sized and well spaced, and the trackpad is accurate.

When it comes to connectivity, the tablet section includes a micro-USB port, micro-HDMI port, a headset jack, and a microSD card reader; all to the left of the screen.

The power button with a small LED indicating power/charge, volume rocker and a Windows Home button sit on the tablet’s right-hand side.

The 11.6-inch, 1,920 x 1,080 IPS panel on the Switch 11 V isn’t too bad, at least for everyday use. It’s clear and has a good level of brightness. Colours are rich, and with this being an IPS panel, viewing angles are inherently good.

I’m not a big fan of the glossy Gorilla Glass screen that’s fitted over the actual panel, however. Acer claims it’s there to help reduce reflections and smudges. In reality it does a reasonable job, but only in darker environments. Should you end up sitting under the office light, you’ll soon find yourself having to deal with significant glare.

What’s more, the glossy pane tends to attract dust, cat hair and fingerprints aplenty – make sure you have a cloth handy to wipe over the surface.

For the most part, the screen will suffice for your daily commute or when you need to catch up with some work. Using it all day may become an issue, however

The Acer Aspire Switch 11 V is ahead of most of the competition in that it comes with Windows 10 Home edition preinstalled. This will save you from having to go through Microsoft’s laborious upgrade process. 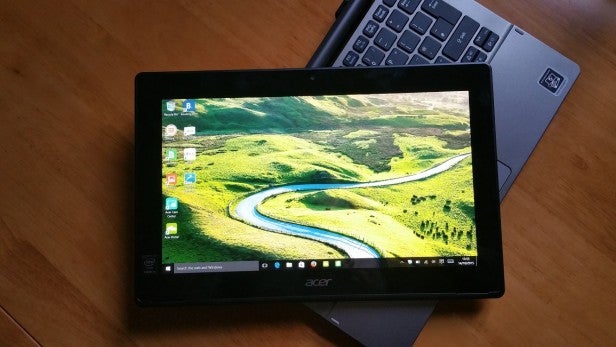 The company has loaded the OS with its usual assortment of software, which includes abDocs, abPhoto and abFiles. These tools will help you to backup, share and organise your content between devices, and with friends and family.

Acer has also bundled in a copy of McAfee LiveSafe Internet Security and the Avast SecureLine VPN program. Finally, there’s a set of desktop shortcuts to Amazon, eBay and Booking.com.

Generally speaking, the Acer apps do little than provide another layer from which to access an already easily accessible Windows function. I’d prefer they weren’t installed, but that’s a matter of personal preference.