Acer’s first convertible
laptop built for Windows 10 is the Aspire R14, and while it doesn’t
completely rewrite the rulebook to offer anything quite as exciting as
the Microsoft Surface Book, it looks like it will be another decent device.

The
one part of the device mentioned repeatedly at the demo was the Aspire
R14’s “dual-torque” hinge, which lets you rotate the display a full
360-degrees around the device. While this isn’t new, Acer’s hinge feels
surprisingly smooth. As a result, switching between the R14’s four modes – including Display, Tent, Tablet and Laptop – is quick and easy. 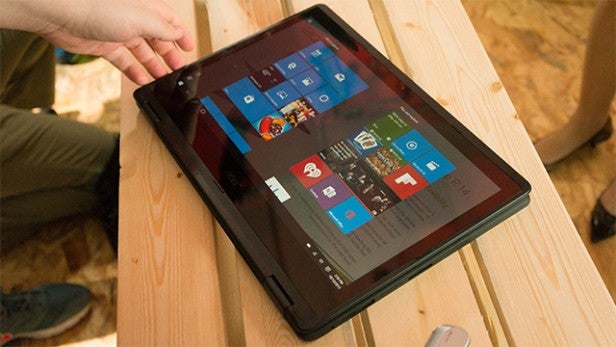 I was also impressed by the fact that there isn’t a gap between the display and the keyboard when it’s fully rotated and set in Tablet mode. This is a common issue with convertibles, one that Acer has solved with the help of some nifty magnets.

On the whole, the Acer Aspire R14 is a good, if not particularly great, looking laptop. The top of the lid is made from metal, and the edges have been “diamond cut” to give them a chamfered look. It doesn’t feel cheap, which is a good thing.

The keyboard keys aren’t built with much travel, but they feel good when typing, and the trackpad was both accurate and fast. 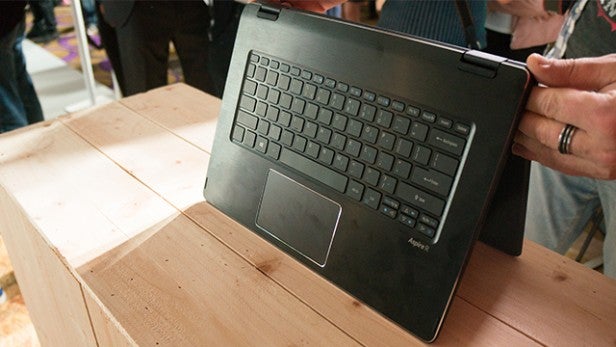 It’s a sharp panel, with punchy colours and good saturation, but I was left a little concerned by its reflectivity. Granted, that the demo room was filled with bright lighting, but turning the laptop even slightly to the side was met with huge amounts of glare.

Acer has kitted the Aspire R14 with something it calls BluelightShield, which lets you alter the display to one of four presets to help reduce eye-strain. If it works, it will be a great addition.

Acer says that it worked directly with Microsoft to ensure the R14 is optimised for Windows 10, and it seems the inclusion of dual-digital microphones is a key enhancements. These mics use digital signal processing to cancel out background noise and improve speech accuracy, which should make using Cortana a whole lot better. 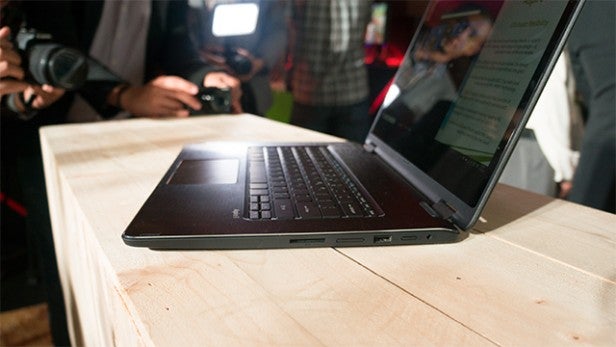 I found that it worked well. Even in a crowded demo room, Cortana picked up my voice and spewed out a response quickly and accurately. With the virtual-assistant being such a key part of Windows 10, it’s good to see it getting the extra hardware with which it can function even better.

Powering the Aspire R14 is either a 6th-generation Intel Core i5 or i7 processor paired with 8GB of RAM. I’ll reserve full judgement about how speedy the R14 is until I get to play with for longer than 30 minutes.

However, first impressions are that it seemed snappy. Apps opened up quickly and navigating Windows 10 was smooth. For internal storage you’ll be able to pick from 128GB, 256GB or 512GB options. 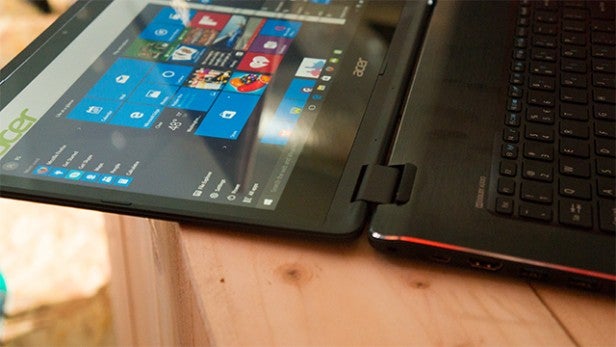 USB-C is supplied as standard – great for future-proofing – but, unlike Apple’s MacBook, it’s joined by more widely accepted USB 3.0 ports.

The Acer Aspire R14 will hit shelves in late October, with prices starting at €799 (about £590). On first impressions it seems like a competent, yet hardly exciting machine.

The hinge is slick and smooth, the screen is bright and I was hugely impressed by the improved microphone setup. You’ll just have to wait for our full review to see how it shapes up after extended use.