There are not one, but two versions of the Abit’s IP35 motherboard, but both use the Intel P35 chipset. There’s the IP35 Pro that we’re reviewing here and the basic IP35 which costs £76. The IP35 has a single graphics slot, SATA RAID, HD audio and Gigabit Ethernet so in essence it’s a basic motherboard that supports the latest Core 2 processors. Truth be told the IP35 doesn’t look too impressive as the list of features is very similar to P965 motherboards from last year yet the price is £15 higher.


By contrast the IP35 Pro packs in a stack of extra features that are aimed at overclockers and gamers for a price that is only £29 higher than the IP35. During the testing for this review I gave the IP35 Pro an especially good thrashing because it was the platform that I last week used to review a 2GB kit of Kingston KHX9600 memory.


The layout of the IP35 Pro is dictated by the dual graphics slots, which split the 20 lanes of PCIe in the usual P35 way with 16 lanes going to the primary slot and a mere four lanes going to the secondary slot. The main graphics slot is spaced sufficiently far from the latches on the DDR2 memory slots that you can remove memory without touching the graphics card, and if you do need to remove the graphics cards you can release them without trouble. This sounds simple – heck it IS simple – but it’s amazing how many motherboard manufacturers get this sort of detail wrong and make life difficult for their customers. 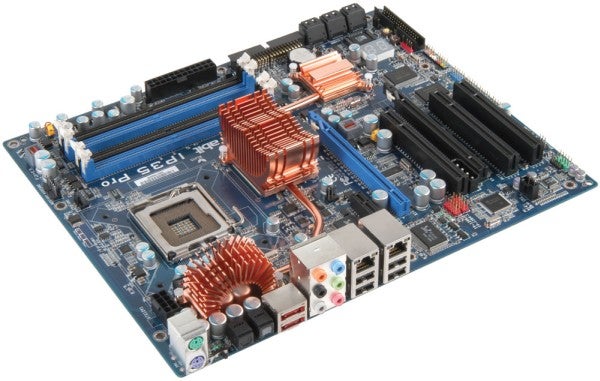 Abit has equipped the passive cooling system that links coolers on the Southbridge, Northbridge and power regulation hardware with heatpipes. It’s the cooling system of choice on modern Intel motherboards as it enables the use of a tiny low profile Southbridge cooler that stays clear of even the most chunky graphics cards. Abit has named the cooler SilentOTES, which is a bit grand as it’s all quite conventional but the copper colour looks very smart and the extensive finning provides plenty of surface area to assist cooling.


The area around the LGA775 processor socket is very tidy with stacks of space for even the largest CPU cooler. The two power connectors are positioned neatly at the edges of the board with a four-pin Molex connector just above the second graphics slot in case you feel the need for extra juice.

It’s down at the foot of the board where things get busy with a bunch of Pro features. Even so, the board remains surprisingly neat. The IDE and six connectors are laid down to route cables away from your graphics card. At the foot of the board is the floppy connector and directly above it are micro buttons for power and reset as well as a debug LED display. Across the bottom edge of the board there are coloured headers for the front panel connections along with four USB headers. There are four USB 2.0 ports on the I/O panel and two more on a bracket so that leaves three headers available for connection to six ports on your case or on extra brackets. The bracket also carries mini and regular Firewire ports, which connect to two headers between the two graphics slots on the same side of the board as the I/O panel.


Turning to the I/O panel there are two PS/2 ports, a clear CMOS switch, optical in and out for the audio, two eSATA ports, six mini jacks, the four USB ports that were previously mentioned and dual Gigabit LAN. The layout of the board is understated and doesn’t have any of the bling that you get with the Asus Maximus Extreme 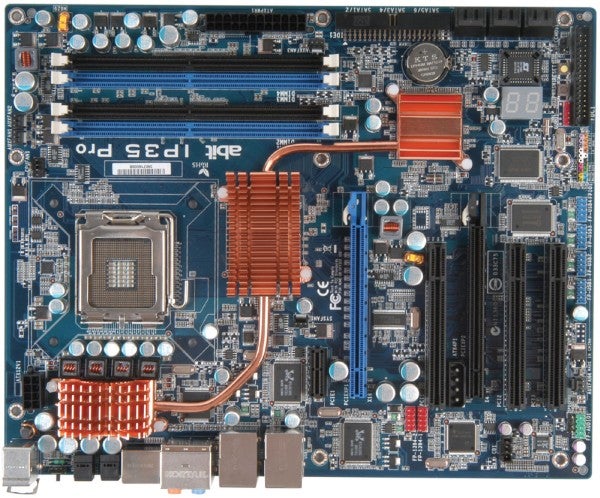 But honestly, there isn’t a single component or connector that needs to be moved. If I try to be picky, perhaps it would be nice to shift the floppy connector up by the memory slots, but that’s about it. The only Pro feature that we haven’t touched on is the Abit uGuru system management chip, which is linked to the BIOS to enable complete control of every clock timing and voltage setting.


As we mentioned in the Kingston KHX9600 review, the range of memory multipliers was somewhat limited and in particular it was a huge step from 1.25x to 1.5x but that wasn’t the reason that we were unable to get the fast Kingston and OCZ DDR2 memory to run at their rated speeds. It seemed to us that the problem was one of compatibility as we very much doubt that the memory manufacturers bother to do much compatibility testing with the smaller brands of motherboard. The result is that the Abit overclocked quite successfully but despite our best efforts with the front-side bus, memory multipliers and outrageous voltage settings, we didn’t do as well as we expected. I’ve seen the Core 2 Duo E6750 used in testing go to 3.52GHz in the past but with the Abit it topped out at 3.28GHz.


That’s no mean feat but it rather suggests that Abit’s impressive BIOS and hardware relies on support from other manufacturers. In particular the memory companies have to do their part to deliver the best results and you cannot guarantee that support will be present and correct.


The IP35 Pro is a superb P35 motherboard that has all the features that you need at a reasonable price. However, we found it didn’t overclock as much as we would have liked.