The Amazon Kindle Fire tablet is on our doorstep, but the big name alone doesn’t assure its success. Many tech staple manufacturers have tried – and mostly failed – to crack the tablet market, so why should Amazon be any different? Working in its favour, it can boast of the success of the Kindle, where many said the ereader market was doomed from the start.

Let’s not forget, though, that the Kindle didn’t crack the mainstream until it reached its third generation. The Amazon Kindle Fire needs to ace a number of factors to have any chance of punching a dent into the iPad’s market dominance. Here’s what we think they are.

A clear message
Confusion could be fatal for the Amazon Fire tablet. Is it an ereader like the Kindle? Is it more like Apple’s iPad? Questions like these could put off the ultra-mainstream buyer Amazon is gunning for.

The tablet’s credentials don’t help here either. It has a 7in screen, which is more portable and book-like than the iPad’s 9.7-incher, but uses a backlit display. Using a backlight means battery life will be measured in hours – rather than the weeks the Kindle claims – and virtually guarantees it’ll feature a traditional LCD-style display. Not the eink display that is the Kindle’s key feature. 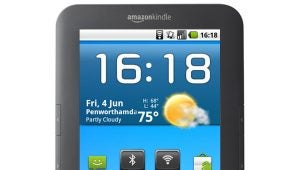 Hopefully not what the Kindle Fire will look like

The Amazon tablet is in danger of inhabiting a middle ground, where it will have no clear focus. In his presentation of the iPad at its launch, Steve Jobs was very clear about its “brand personality” as a “magical” internet device. Being all things to all people is never a convincing argument – something that Jobs realised.

A darn good screen
Form factor is recognised as a key part of any tablet – as it’s something you invariably hold, aside from the half-dozen people that use iPads in keyboard docks. However, the quality of the screen is even more important.

Budget tablets like the Archos 70 and Storage Options miScroll proved to us that a high-quality display is a must-have for any tablet aspiring for mainstream success. Turn these cheaper tablets the wrong way and the image all-but disappears, zapping any notion of a “premium” experience. Desirability must be a key lure of a tablet – even a cheap one.

The Nook Color has set a positive precedent

We have faith that Amazon knows this, though. Over in the US, the Barnes & Noble Nook Color – an ebook-driven tablet released in late 2010 – uses an IPS display just like the iPad, but launched at just $249. It too had a 7in display, and we wouldn’t be at all surprised if the two bore a striking resemblance.

A better app store than Appstore
The Amazon tablet reportedly won’t give you access to the Android Market – usually a great big hurdle to put in the way of any aspiring Android tablet. Instead, it will rely on Amazon’s own Appstore.

Until last week, this Appstore was only available in the US, and it has just a tiny fraction of the apps available on the Android Marketplace or iOS App Store. It launched with less than 2 percent of the Market’s wares, and less than one per cent of Apple’s App Store at launch. Unless Amazon is willing to aggressively ram its tablet down our throats – which it may well do – it only has a short window in which to make an impact, and this paucity of apps won’t help.

There are key ways it can mitigate for this, though. Amazon MP3, the Kindle book store and Amazon’s video streaming service will also likely be built into the tablet, in a heavily customised and optimised manner. Amazon Instant Video is yet to be released to us UK folk, but it’ll be missing a trick if it isn’t by the time the tablet comes to Amazon UK.

The Appstore also has many of mobile gaming’s key developers onboard already. Popcap, Rovio and Halfbrick Studios have brought their key licenses to the app platform. But it needs more.